The 💉 Syringe emoji has been updated to remove the blood, allowing this existing emoji serve as a vaccination emoji in 2021.

New emojis and new vaccines have more in common than might first meet the eye.

Both require oversight from various committees, take years to approve, and these result in varied implementations from different companies, but each with the same goal in mind.

While new emoji approvals take years, changing the design of an existing emoji can produce a similar result in a fraction of the time. 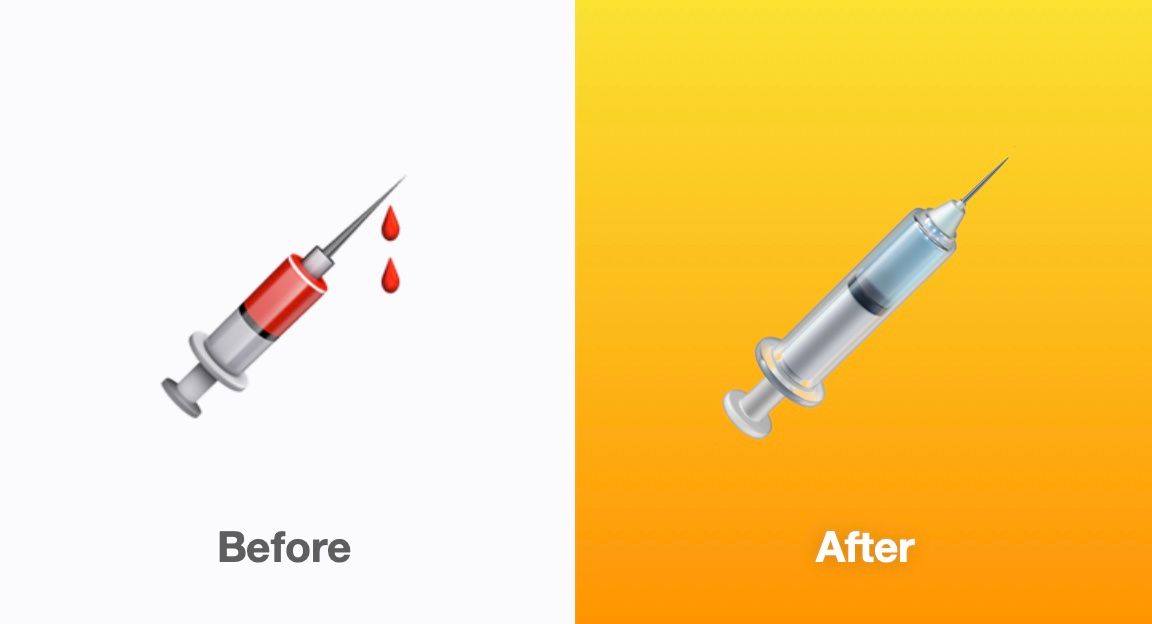 Above: Syringe is now displayed with an empty barrel in the latest iOS 14.5 beta release. Image: Apple designs / Emojipedia composite.

This isn't a new emoji, but an update to the design of the existing syringe emoji to make it more flexible for a wide variety of uses. This change is now displaying in the latest beta release of iOS 14.5 and is also coming to a future Android release.[1]

With discussion of COVID-19 most commonly using 🦠 Microbe as a proxy for the virus, we look at whether the 💉 Syringe emoji is seeing similar uptick in use for Coronavirus vaccination.

Dating back to 1999, the syringe emoji was primarily used for blood donation in Japan, and standardized within the Unicode Standard in 2010.

Above: Original documentation for medical emojis, from Japan.

During 2015–2020 all major emoji vendors converged on a consistent set of traits: the syringe includes blood, sometimes a blood drop or two, and even the angle of the syringe aligned across phone platforms. 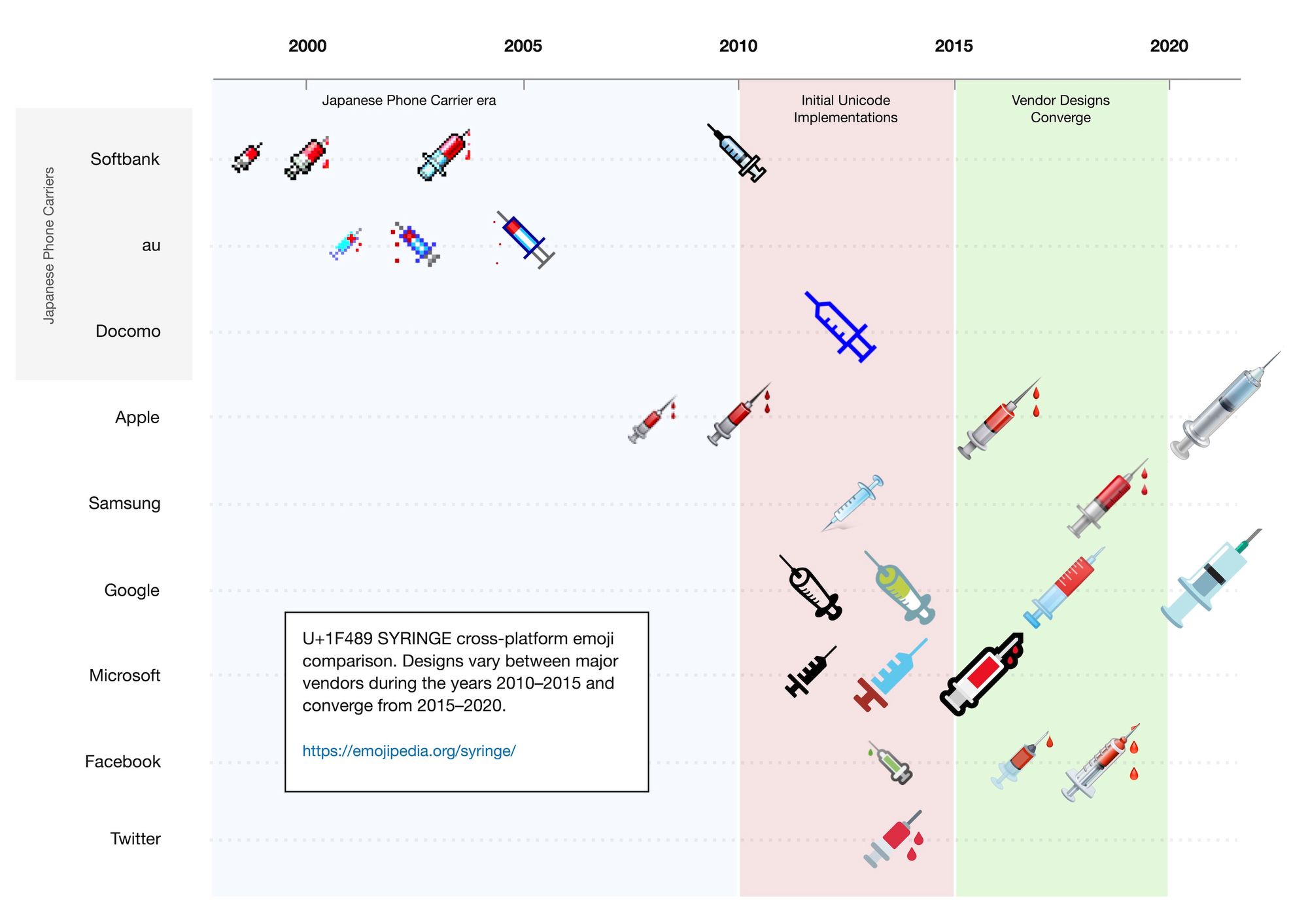 Some platforms like Samsung already had an empty syringe years ago, only to update the Galaxy line of phones to show blood in this emoji in August 2020. Google, too, first implemented this emoji without the blood before later adding it in, and now removing it again.

There's quite a lot of emojis that represent blood already, which makes a move to an empty syringe practical. Three of the obscure letters on the emoji keyboard are encoded to blood types:

Additionally, a blood drop emoji was approved in 2019 both to represent blood donation, as well as menstruation.

It's fair to say the topic of blood is well represented on the emoji keyboard, and perhaps the syringe could be better served with a less specific design.

It's 2021 and there is a consistent demand for an emoji to represent the one hope out of the pandemic of the past year: vaccination.

A good emoji can stand in for multiple purposes, and the issue with showing blood in the syringe emoji is the unnecessary limitation. Removing the specific liquid inside allows for versatility.

The same argument could be made for the 🍷 Wine Glass emoji. By including red wine, it opens the question as to why there is no white wine emoji. Remove the wine? Now its practical for red, white or rosé in equal measure.

Lots of emojis have changed design over the years. Most companies have completely overhauled nearly every emoji in the past decade. Sometimes to add more detail, other times to improve cross-platform consistency, or simply to try for an overall improvement. 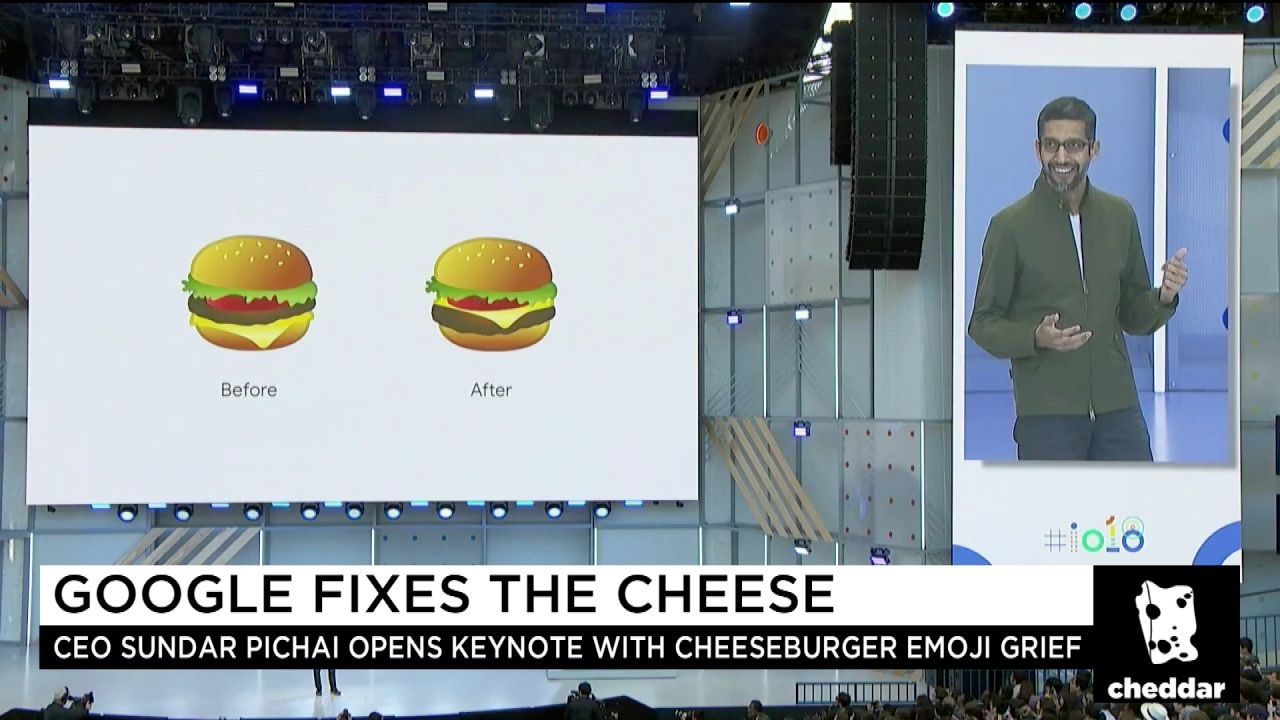 Most of these changes were considered improvements, and didn't adversely impact the meaning of the emoji itself. A welcome distraction from the world.

Some changes have been less popular over the years.

Most famously, Apple's changed the appearance of the 🔫 Pistol emoji in 2016. This was followed by other vendors in later years, but the upset caused by this may have caused the company to tread more lightly when it comes to repurposing an existing emoji. 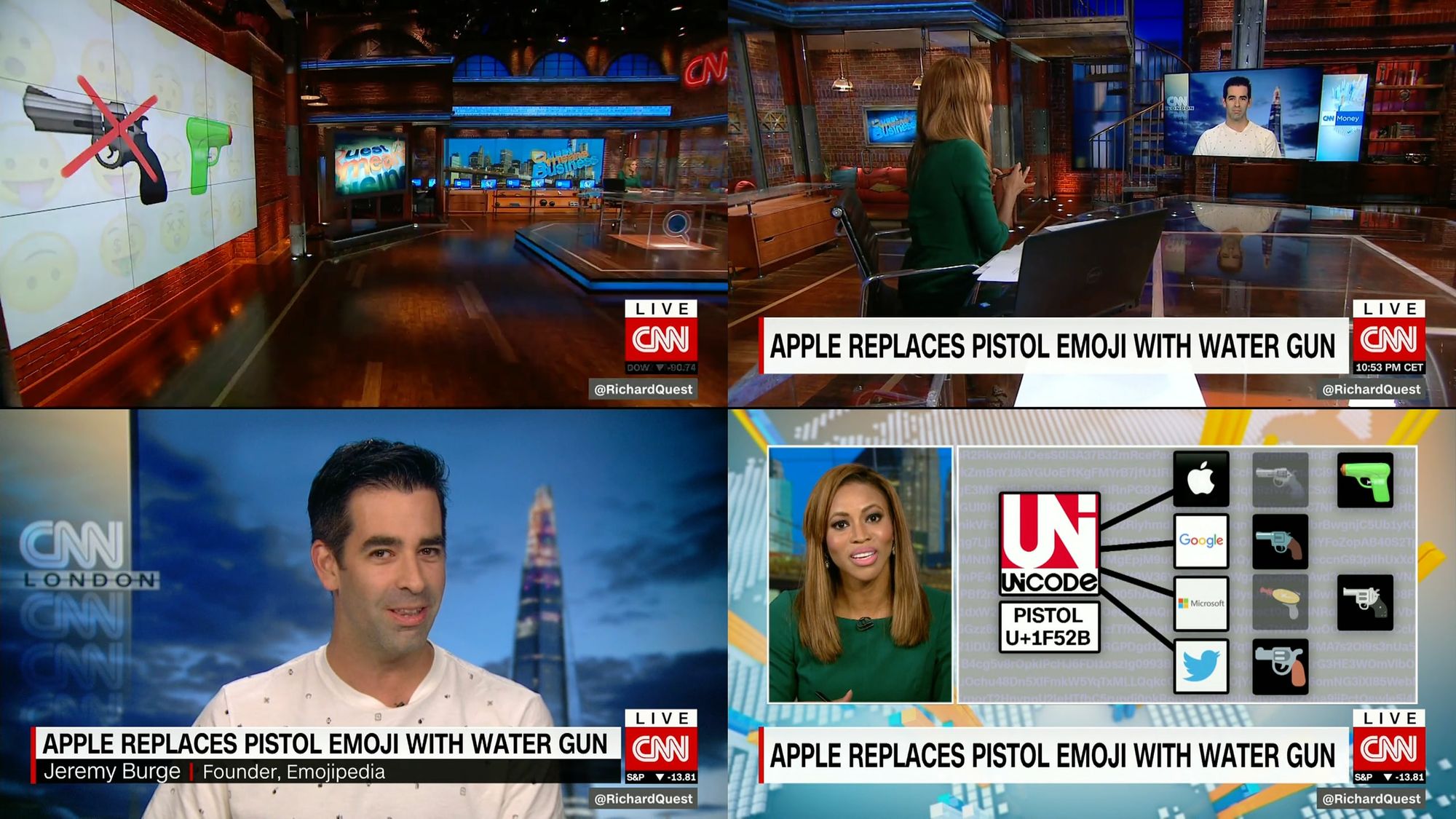 Above: Changing the appearance of an emoji can change the meaning, for better or worse. Images: CNN.

With the syringe emoji, we're in different territory.

The new liquid-free syringe shouldn't pose new cross-platform compatibility issues, and there's not exactly a blood enthusiasts demanding that blood remain in the syringe. At least not that we've seen yet.

How People Use the Syringe Emoji

One question when changing an emoji appearance that must arise is whether this will affect how people use it. How have people been using the syringe emoji prior to 2020?

We saw an upward trend for the syringe emoji in our analysis of 2020 emoji trends. Was this due to discussions of a vaccine for COVID-19, or was something else going on?

To answer these questions we conducted an analysis on historic emoji data from Twitter.

Firstly, we compared the scale of syringe emoji use on Twitter in December of 2017, 2018, 2019 and 2020. As shown below, this emoji appeared in more and more tweets as the years progressed, in keeping with the upward trend in overall emoji usage detected in earlier analyses. 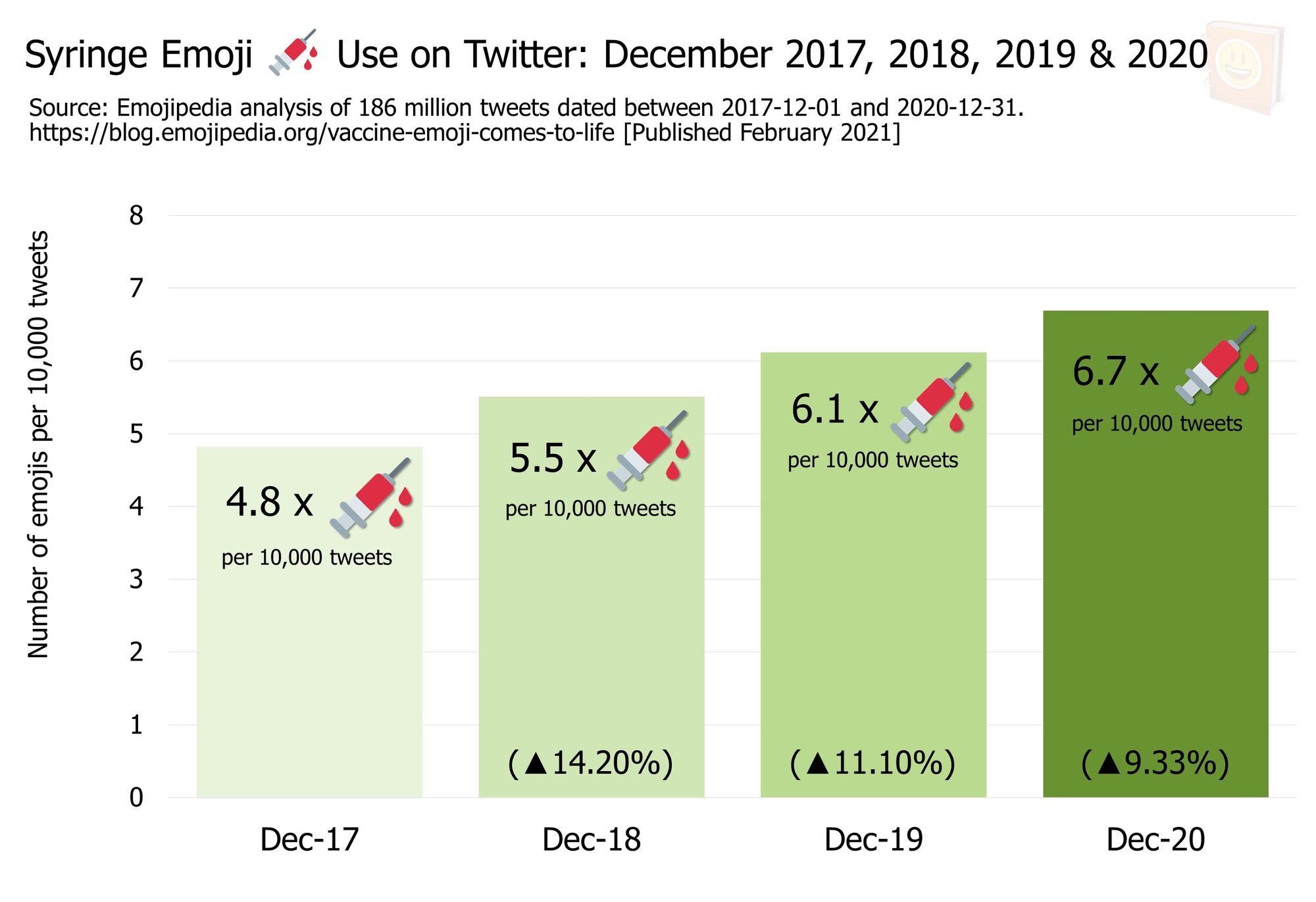 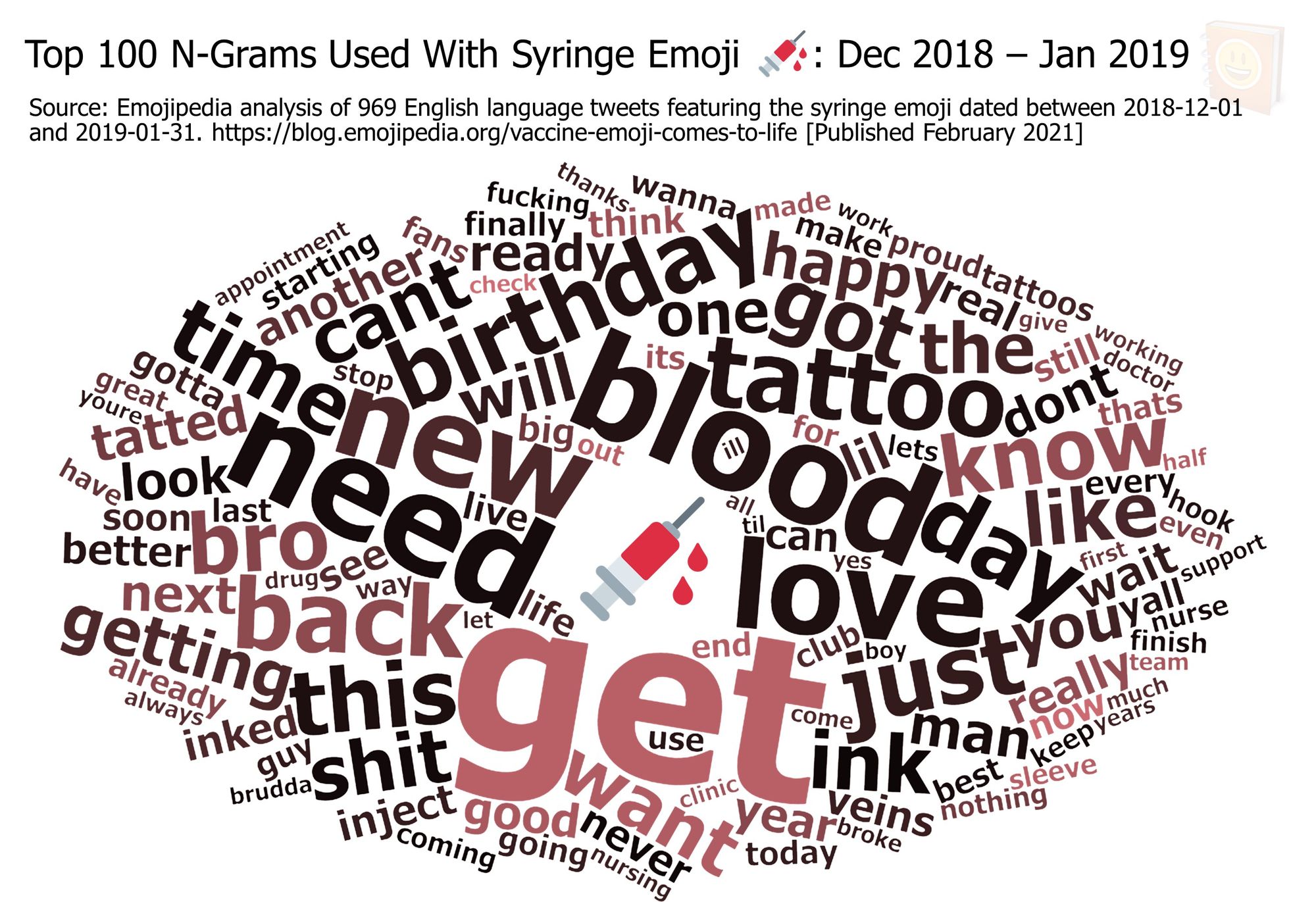 Above: the top 100 n-grams from 969 English language tweets featuring at least one syringe emoji across December 2018 and January 2019.

The discussion surrounding the syring emoji is quite different by December 2020.

Instead of focussing on blood and tattooes, tweets using the Syringe emoji become very focused on COVID-19 vaccines (e.g "vaccine", "vaccines", "COVID", "Pfizer") and the political context of the vaccine disruption (e.g. "Donald").

This goes to show that use of 💉 Syringe to mean "vaccine" is happening, regardless of the change to the emoji design. 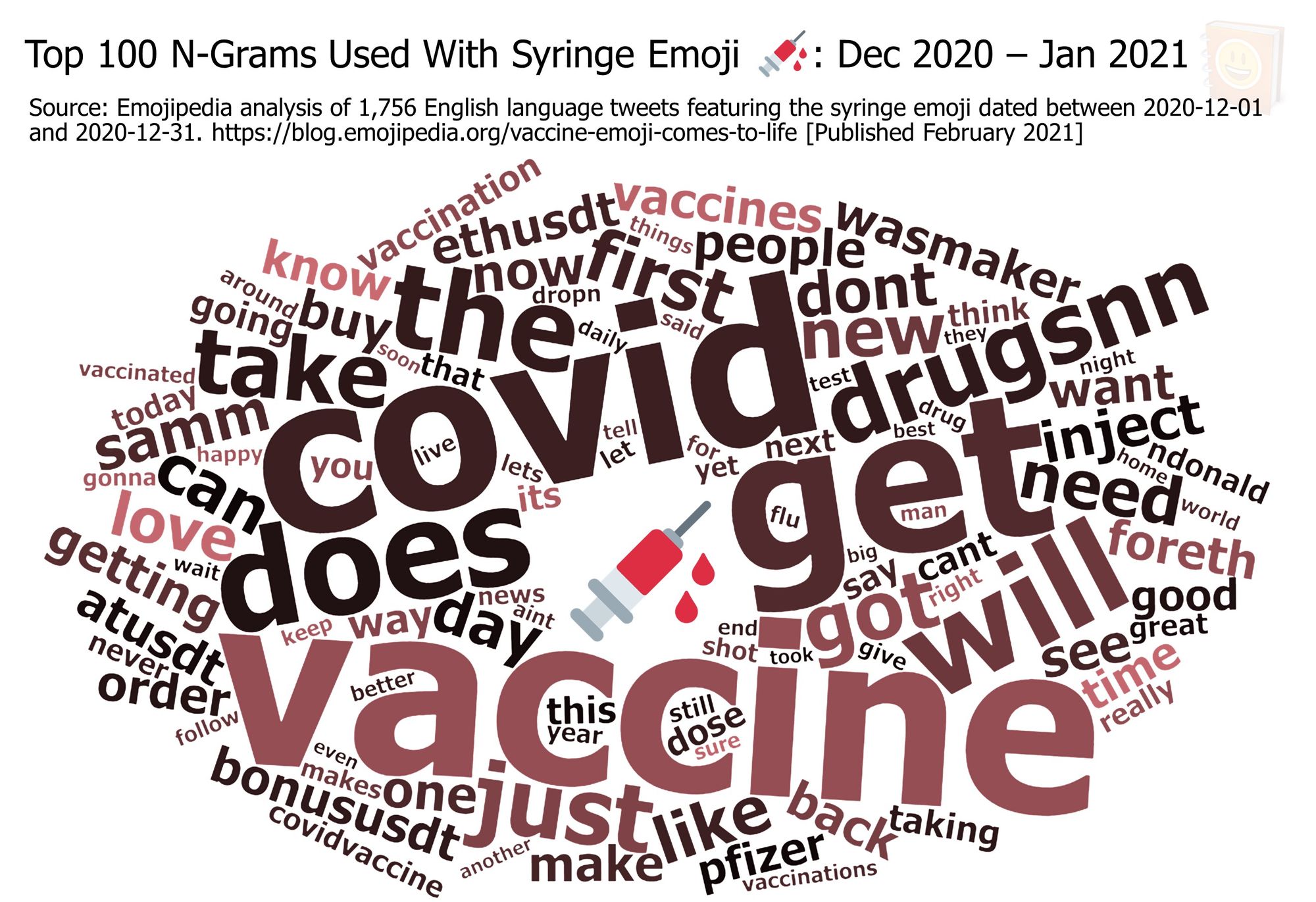 The top ten emojis included alongside the syringe emoji in tweets across December 2020 and January 2021 were: 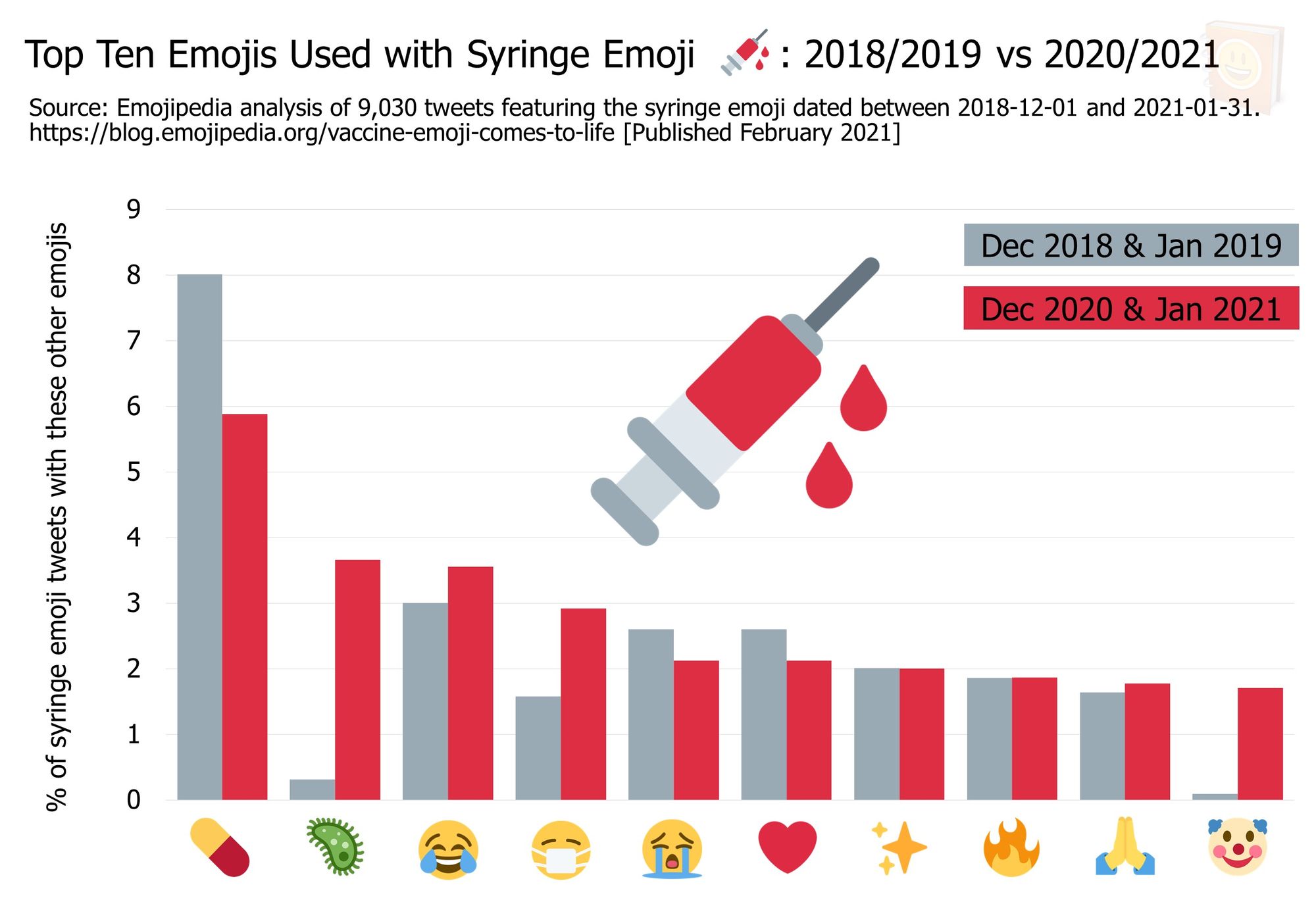 The large jump in both 🦠 Microbe and 😷 Face with Medical Mask between 2018 and 2020 is to be expected considering these two emojis' connection with discussions of the coronavirus.

However, the decreasing usage of 💊 Pill, and the visually indistinguishable levels of ✨ Sparkles and 🔥 Fire strongly indicates that the usage of other emojis alongside the 💉 Syringe decreased between 2018/2019 and 2020/2021, likely due to the rise of 💉 Syringe emoji in discussions of COVID-19 and the vaccination rollout across the world. 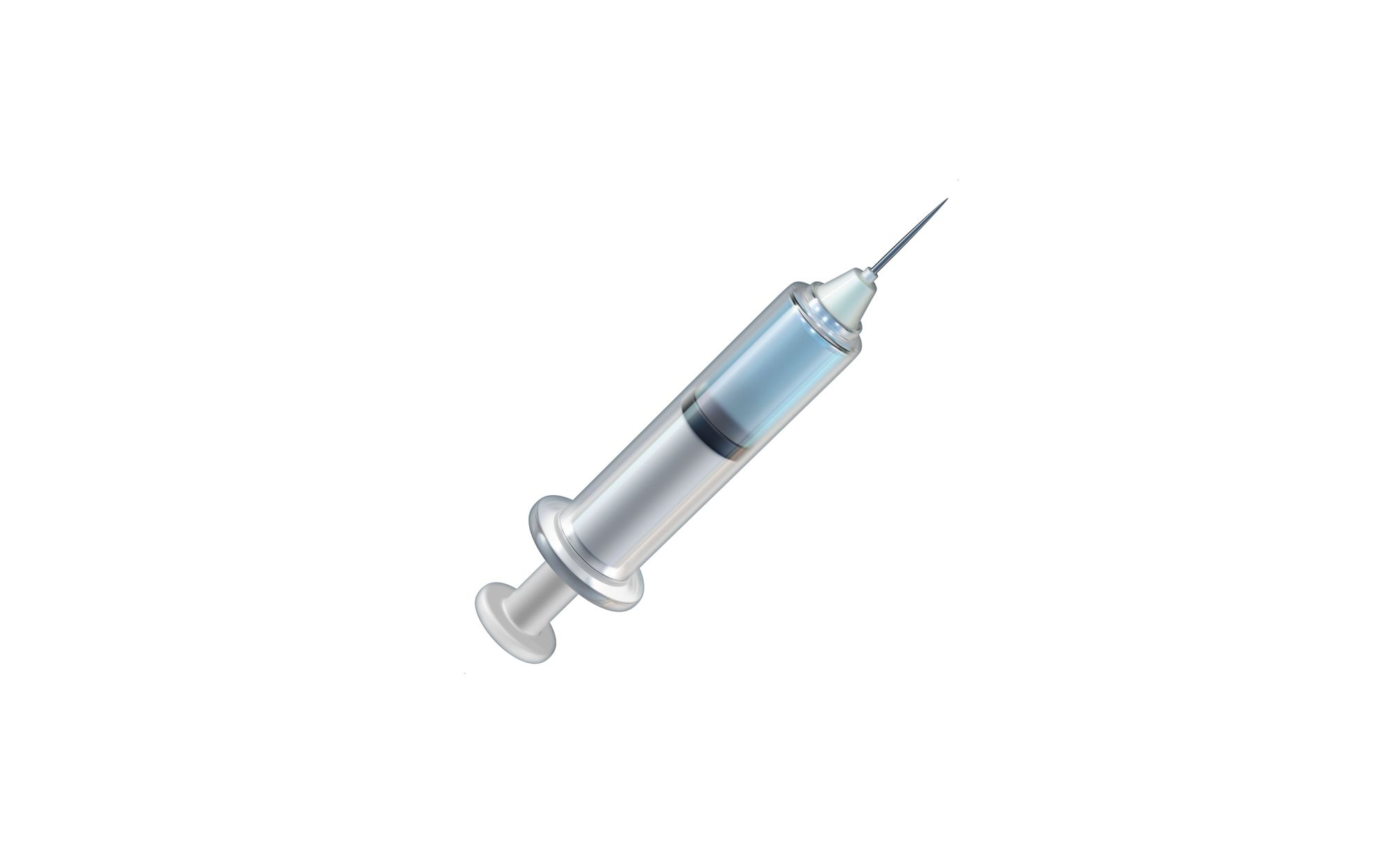 Above: Will the blood-free syringe help anyone concerned about vaccination? Image: Apple.

iOS 14.5 is in beta now, coming to a full release in March or April 2021. Android users may see a more varied release schedule, with Pixel owners often seeing Google emoji changes ahead of other phone models. At the time of writing, the change doesn't appear to be part of any available software update.

As vaccination becomes a growing part of the news agenda and in fact our lives: expect to see 💉 Syringe grow in use. Perhaps even more so with its new, vaccine-friendly design. 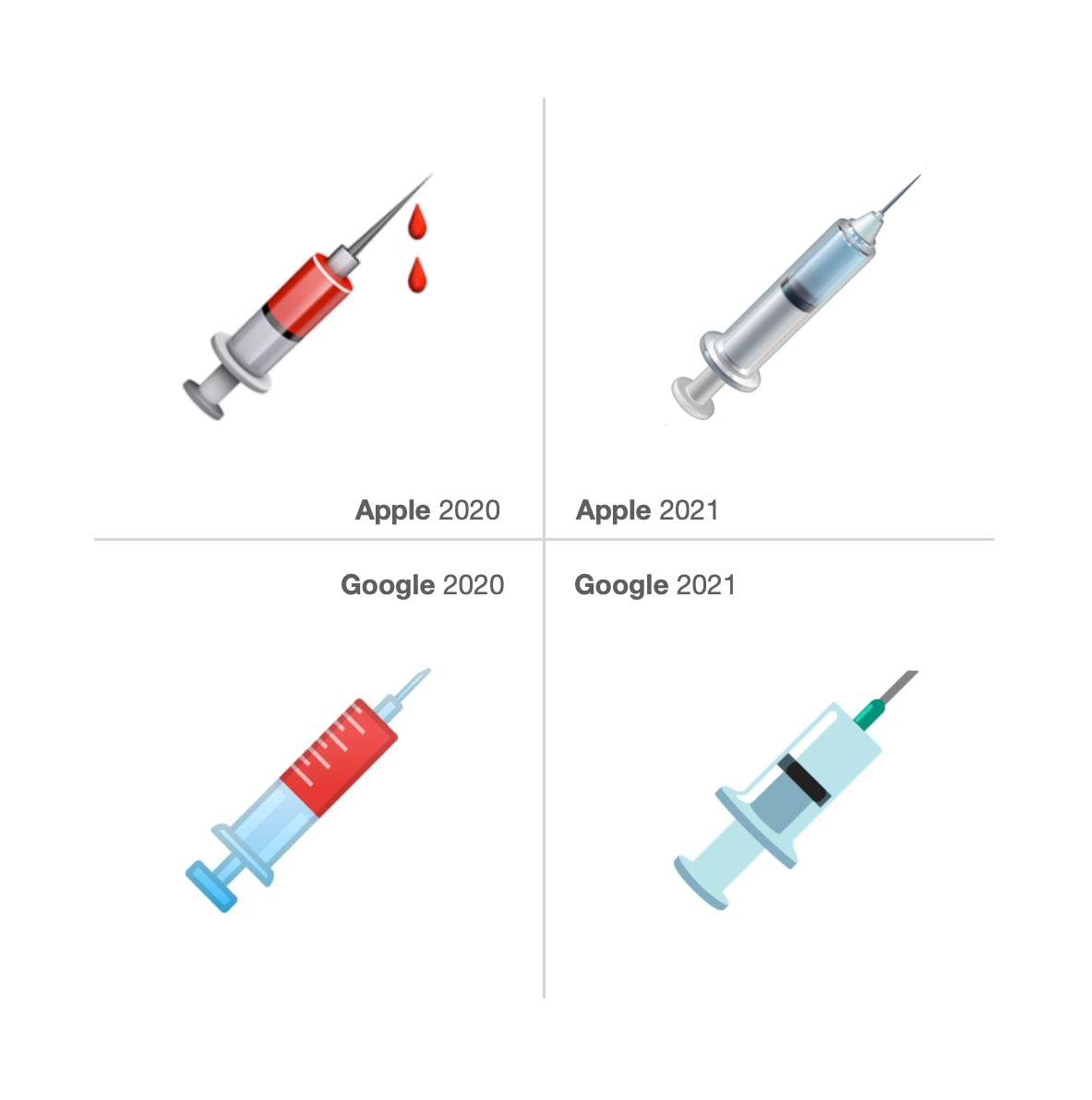 Above: New vaccine-friendly syringe emoji coming to Apple and Google platforms in 2021.

Update 2020-02-18: This article has been revised to note that the syringe emoji design is changing in emoji fonts from Google as well as Apple. The original version of this article only referenced the Apple iOS syringe update.[4]