A sentiment analysis performed by Emojipedia finds that positive emoji use is on the decrease, while the total number of emojis sent in our communications continues to rise.

Analyzing 68 million unique tweets, a number of patterns have emerged which go some way toward reflecting the global mood and how we communicate in the “new normal” of 2020.

By grouping “smiley” emojis – generally classed as the non-human yellow balls of emotion – into positive and negative categories, we can assess various sentiment trends on Twitter.

Of all the available emojis, smileys tend to be most used to convey emotion, and are most useful for this style of sentiment analysis. They're also the most popular type of emoji sent, according to Unicode statistics.

Isolating instances[1] of smileys and charting the relative size of their emotional polarity ("Positive", "Negative" or "Other/Ambiguous")[2] allows a look at emotional trends on Twitter, when it comes to emoji use.

Charted below are these three groups of smileys, shown as a percentage of all individual emoji instances during four selected time frames between August 2018 and April 2020.[3]. 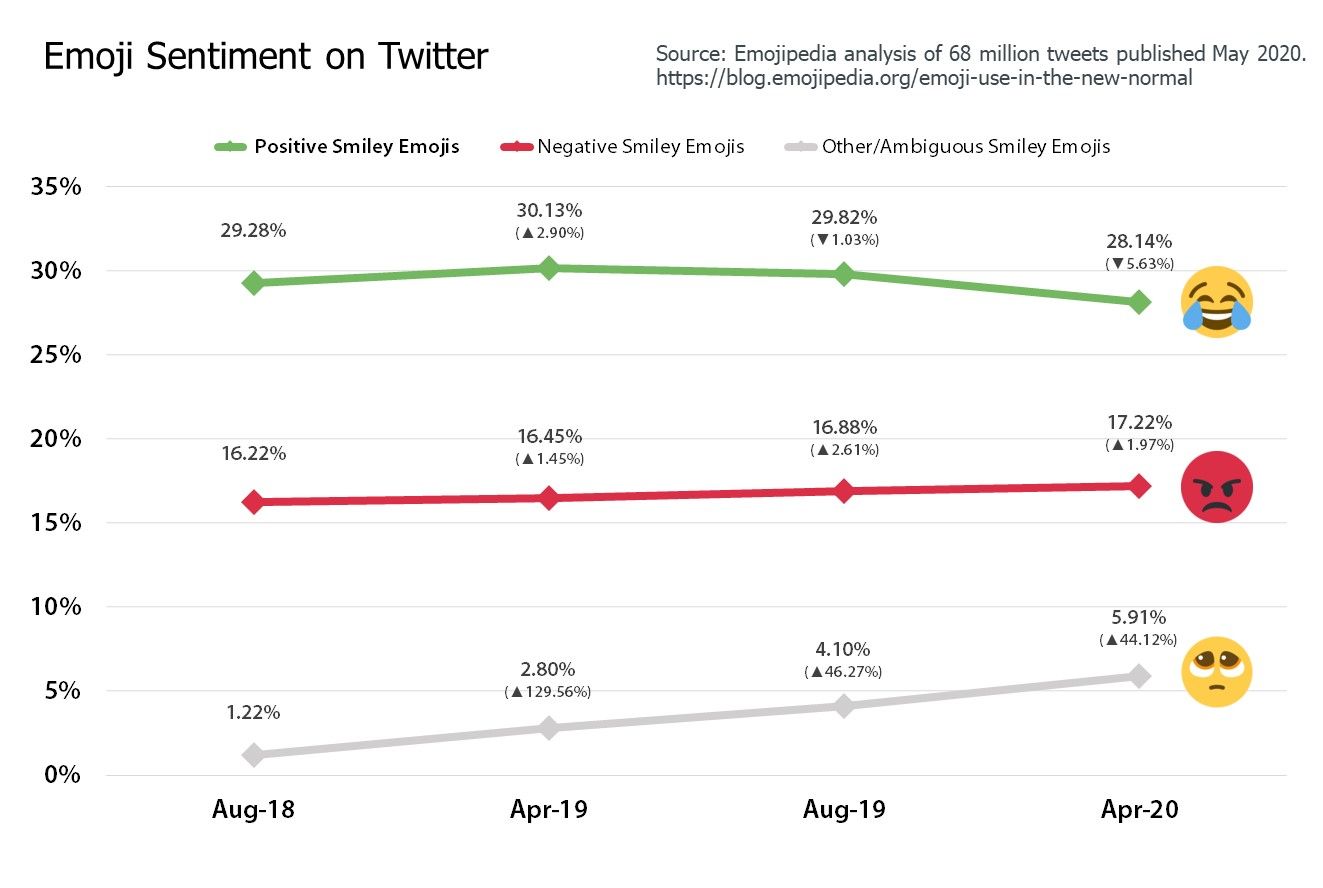 Above: The relative use of positive emojis is down, while negative emojis have seen a slight increase.

What this data also shows is that positive expressions remain the most popular type of smiley. These never dropped below 28% of all emoji instances throughout the period measured.

While it's impossible to determine all reasons behind any sentiment shift, this change could be a result of fewer positive tweets due to the current global pandemic, especially as the largest relative drop was seen in the most recent period.

There is a considerable jump in the number of "Other/Ambiguous" instances, which is accounted for by rapid ascent of the popular and variable 🥺 Pleading Face. This relative newcomer has ended up as the third most popular emoji on Twitter.

Relative to all smileys sent, negative emoji use continues to show a steady climb year-on-year. This a trend which continues year on year.

A total of thirteen different emojis appeared at least once in the analysis of the top ten emojis found over the four timeframes assessed.

This shows a relatively stable level of popularity for those emojis most often used by Twitter users. People are known to be creatures of habit after all. 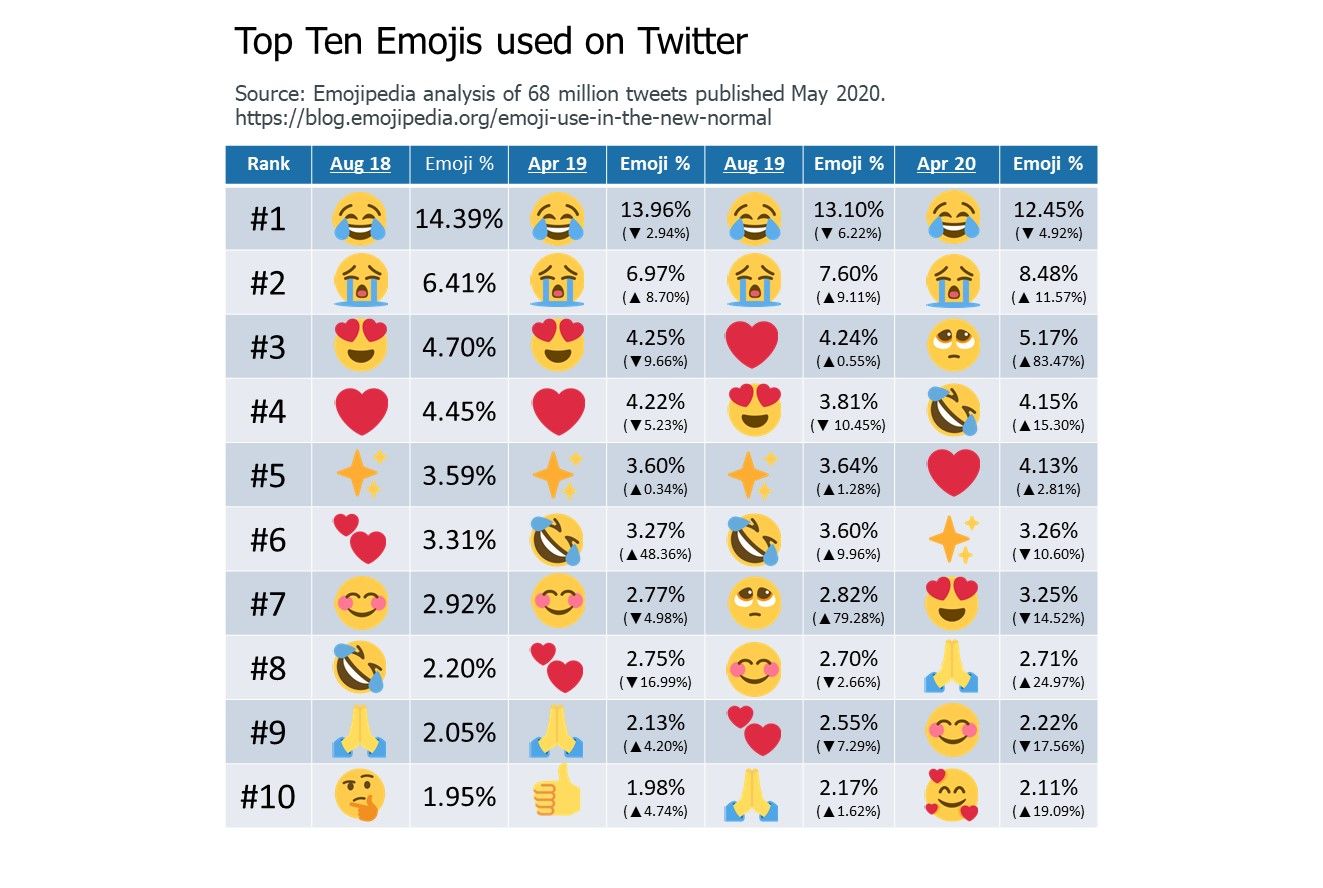 The top thirteen emojis, ordered by their relative rank in our sample from April 2020[4]:

Across all four time frames, the 😂 Face with Tears of Joy was firmly in first place, followed somewhat distantly by the 😭 Loudly Crying Face.

Note that in the chart above we describe the percentages for each emoji in each time frame[5] as "Emoji %". This is the percentage of tweets featuring at least one emoji that the specific emoji appeared in.

🙏 Folded Hands saw nearly a 25% increase between August 2019 and April 2020, which could be related to our current circumstances. No it's not a high-five. 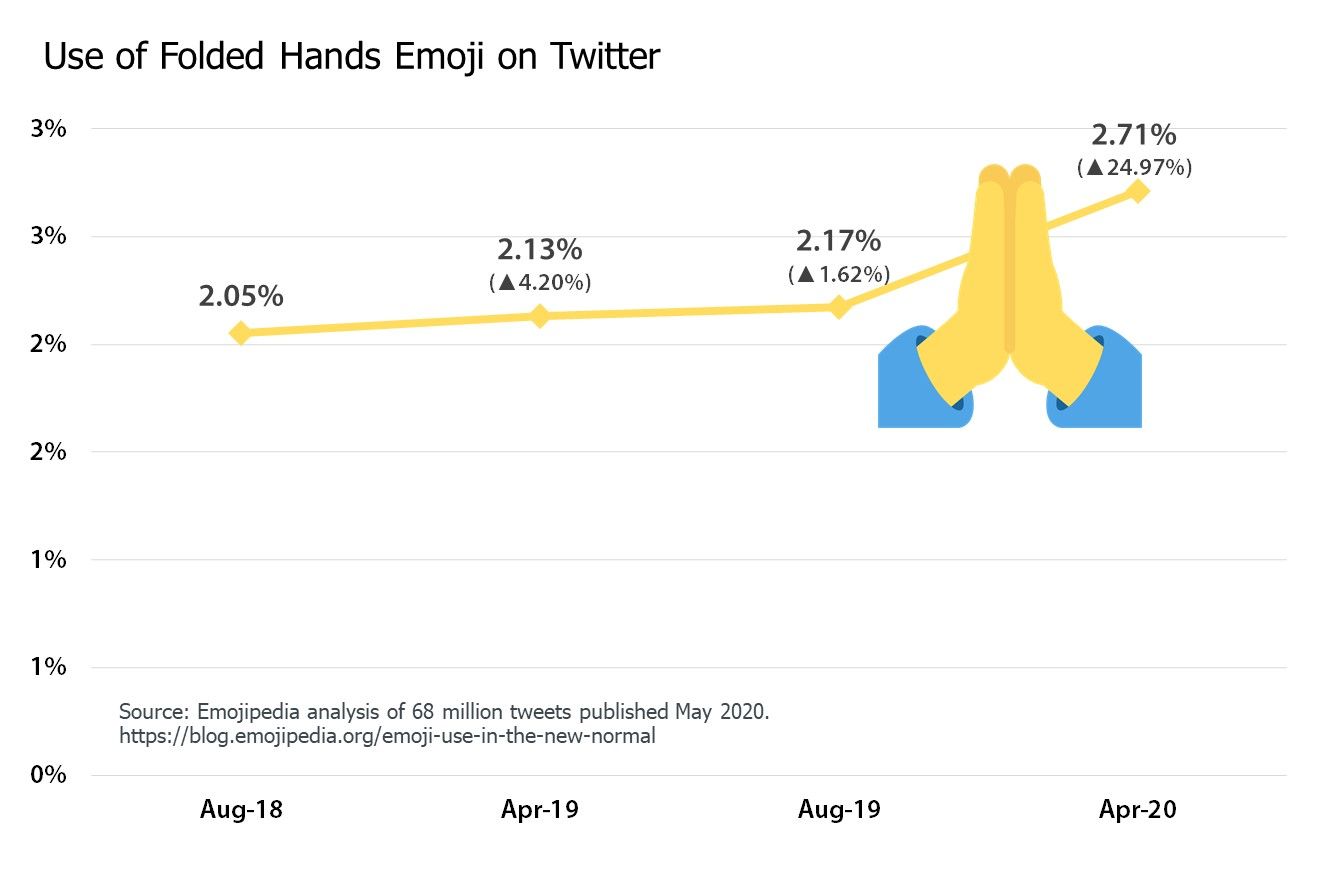 Above: Use of 🙏 Folded Hands has increased.

A common question right now is whether our global shift to working-from-home has resulted in more emoji use. Emojipedia itself has seen high growth recently, but does that mean more emojis are being used overall?

Based on our analysis of 68 million tweets, the answer is a resounding yes: emoji use is up. The most recent period assessed shows nearly one in five (19.04%) of tweets contains at least one emoji. 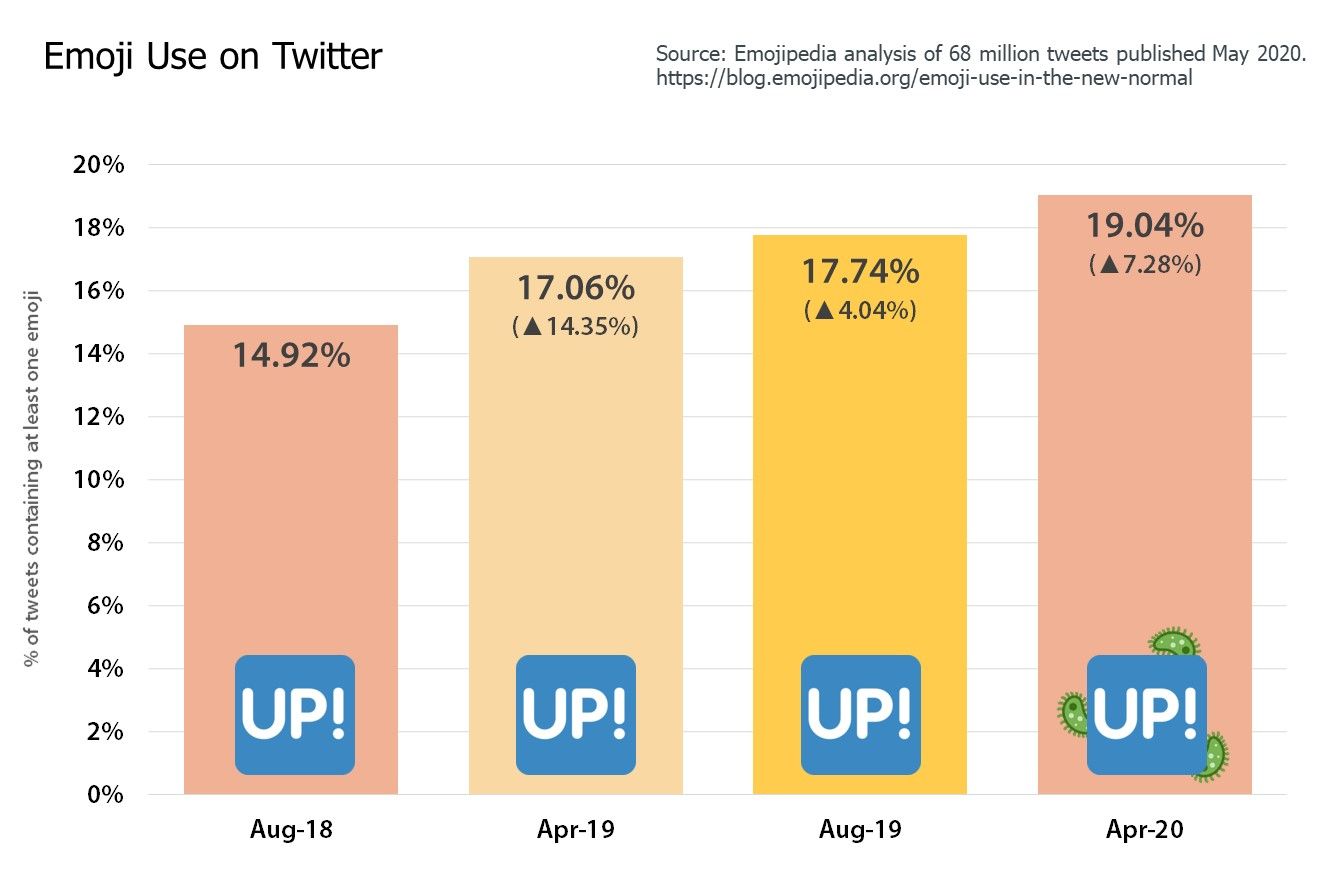 This follows an increase from 14.9% to 17% between August 2018 and April 2019, a relative increase of 14.1%. So while emoji use continues to grow, this is a trend that has been taking place for quite some time now.

A wider analysis of emoji growth trends would need to be conducted to make a more substantive claim about whether Coronavirus has impacted growth, either positively or negatively.

Are the types of emojis we are sending changing, and if so: how?

When assessing the relative popularity of each group, smileys and people make up such a high percentage, it's difficult to even make out some of the lesser-used groups.

Shown below are the top three categories of 😃 Smileys & People, 🐻 Animals & Nature and 🔣 Symbols.

All other categories have been combined into a single group for legibility. 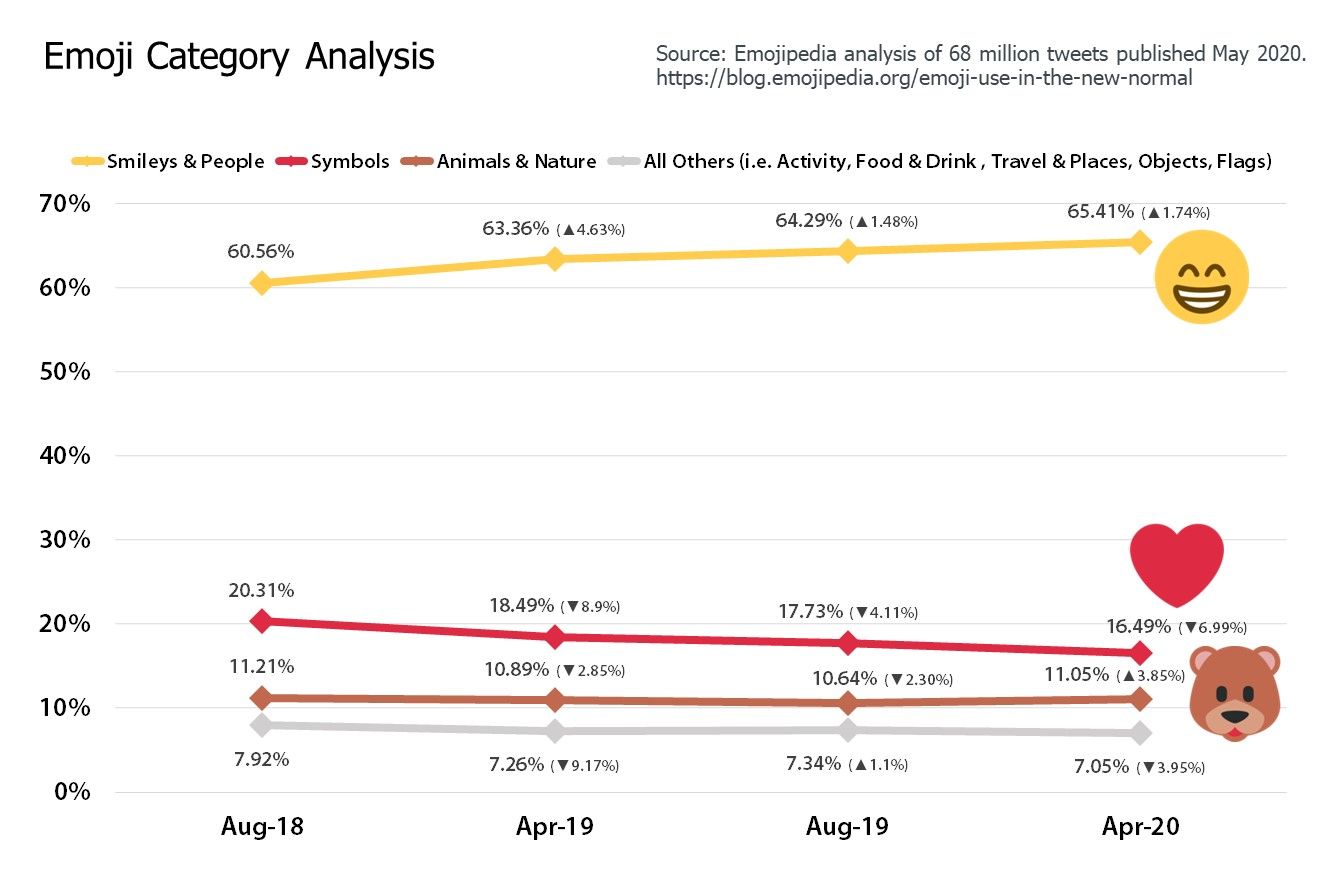 In distant second is the 🔣 Symbols category, which is dominanted by the various heart emojis. This is continues to trend down, possibly due to new smileys that include hearts.

All other categories collectively accounted for no more than 7.92% of all emoji use.

To better observe trends in the smaller categories, the top three categories have been removed from the chart below. 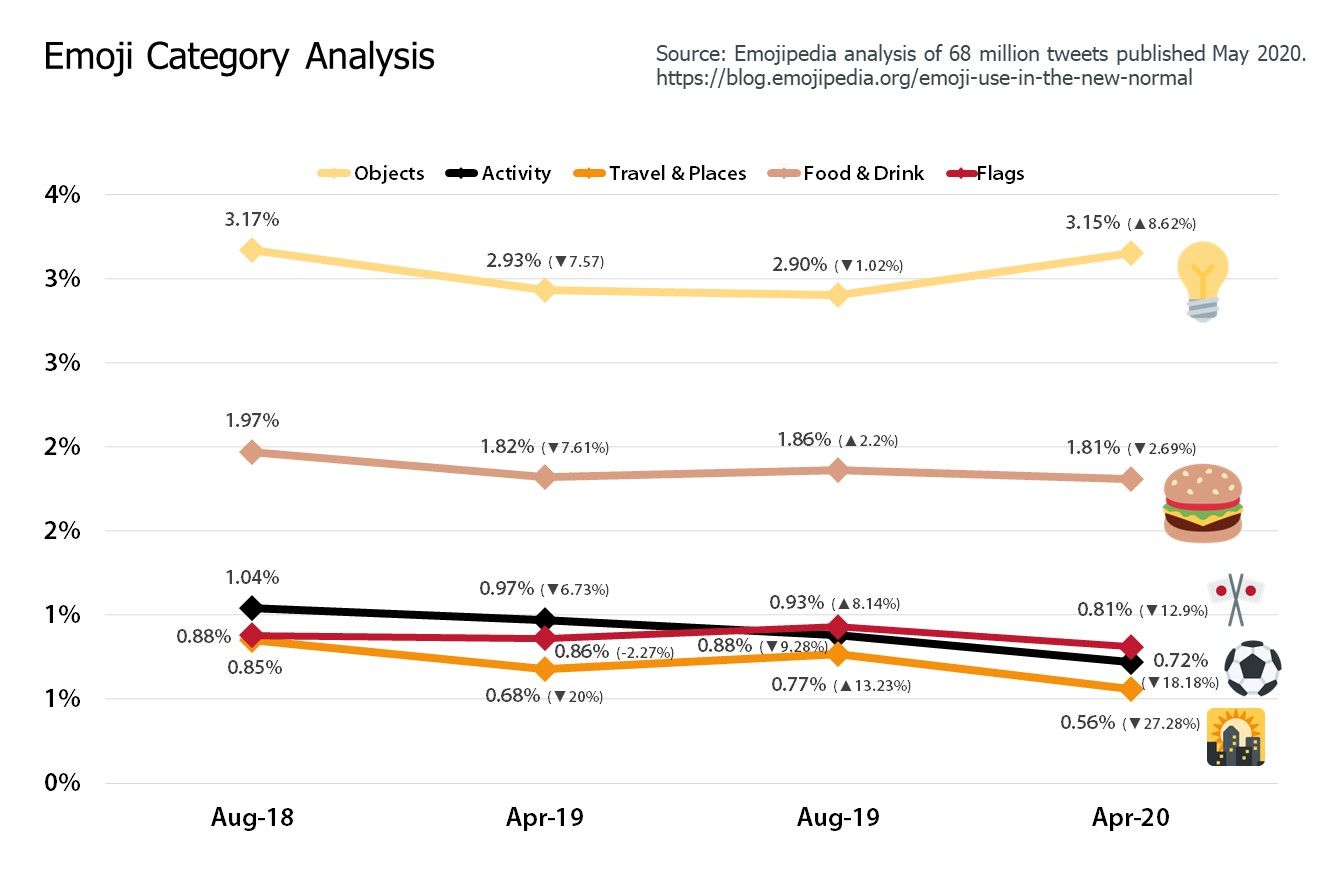 While the variations in these categories do largely appear to be following an expected pattern of ebb and flow, the relative decline of the 🌇 Travel & Places category of 27.28% between August 2019 and April 2020 seems initially interesting as a potential response to the travel restrictions of 2020 in many countries around the world.

However, one should also note the 20% decrease in this category between August 2018 and April 2019: could this be a seasonal effect for travel emojis between Summer and Spring in the northern hemisphere? A closer analysis would have to be taken to determine the month-by-month trends here.

What is shown is that this year's drop in travel-related emojis is more pronounced than the same decrease in 2018-2019.

Looking deep into the wider emoji set: which emojis saw large increases or decreases in their use of late?

Often the lesser-used emojis can be missed in charts of most popular emojis, but that doesn't mean there aren't trends to be found.

We peformed this analysis by assessing the relative increase in usage between August 2018 and April 2019, excluding any emoji that did not have over 1,000 instances of use in April 2020.[6]

These are the emojis which saw the greatest relative increases in the past nine months:

Both 🤍 White Heart and 🥱 Yawning Face were introduced in 2019 via Emoji 12.0 and introduced to Twitter users on browsers in April 2019.

Despite this, its usage in August of 2019 was quite minor. However, following the introduction of both 🤍 White Heart and 🥱 Yawning Face to Samsung and Apple devices at the end of August and October respectively, these emojis experience a meteoric relative rise in usage in terms of their overall share of tweets featuring at least one emoji. 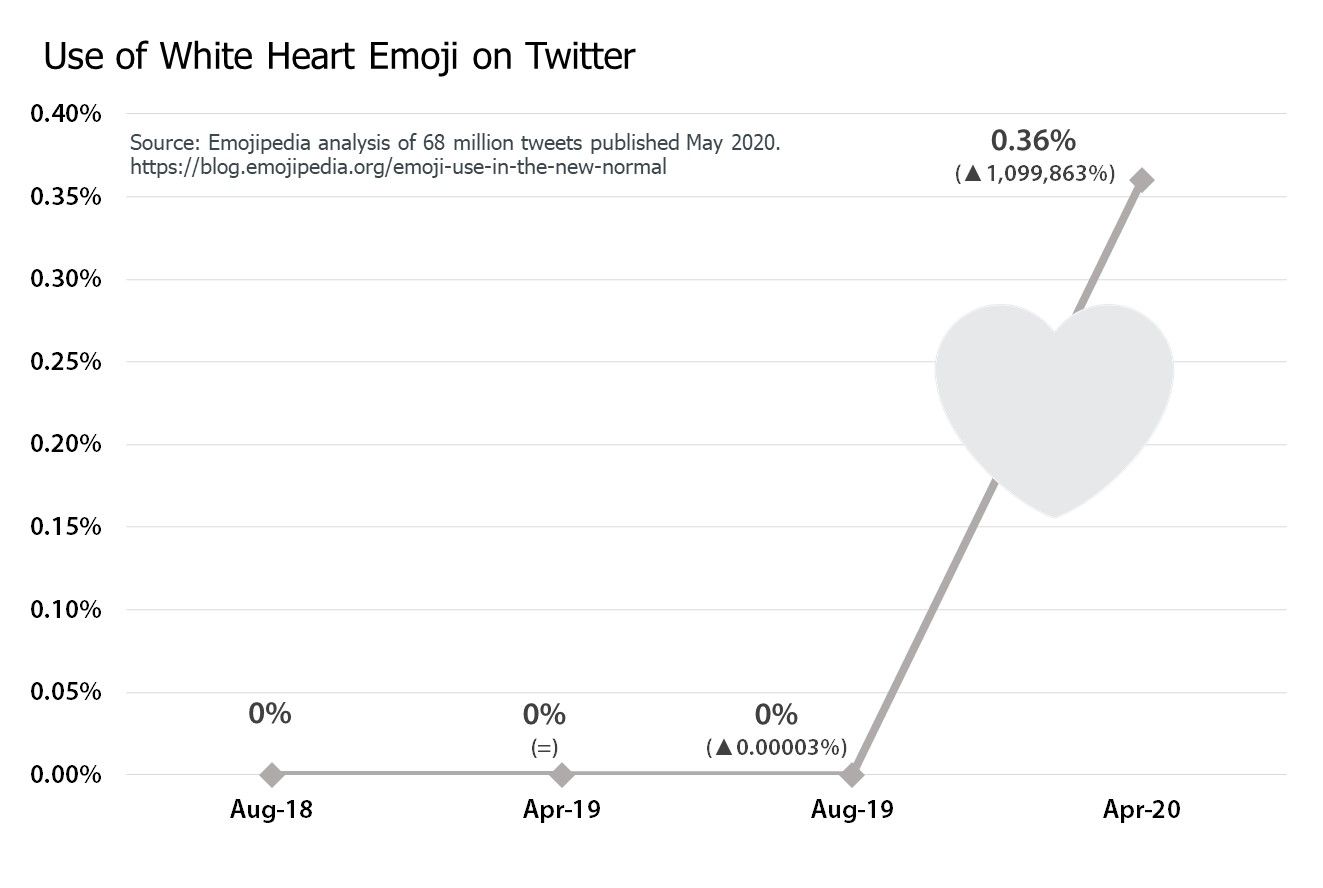 The increase in 🛒 Shopping Cart is of interest considering the widely-reported instances of crowded supermarkets that occurred across much of the world in the wake of the coronavirus outbreak. 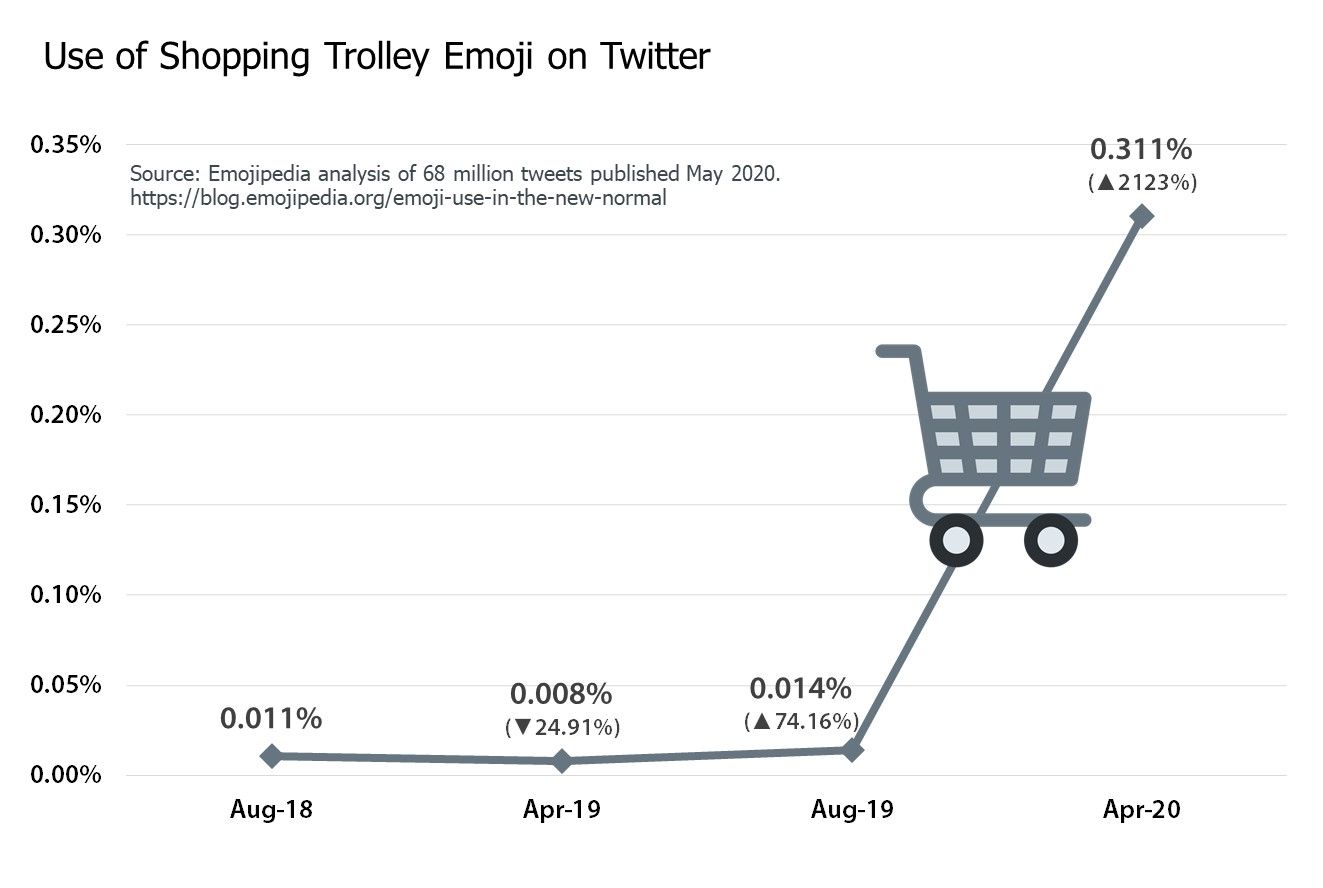 Fourth in the list of emojis which have seen the most growth in this period is the 🦠 Microbe which appeared in our initial COVID-19 emoji analysis last month.

The relative change in use of each emoji is shown below. 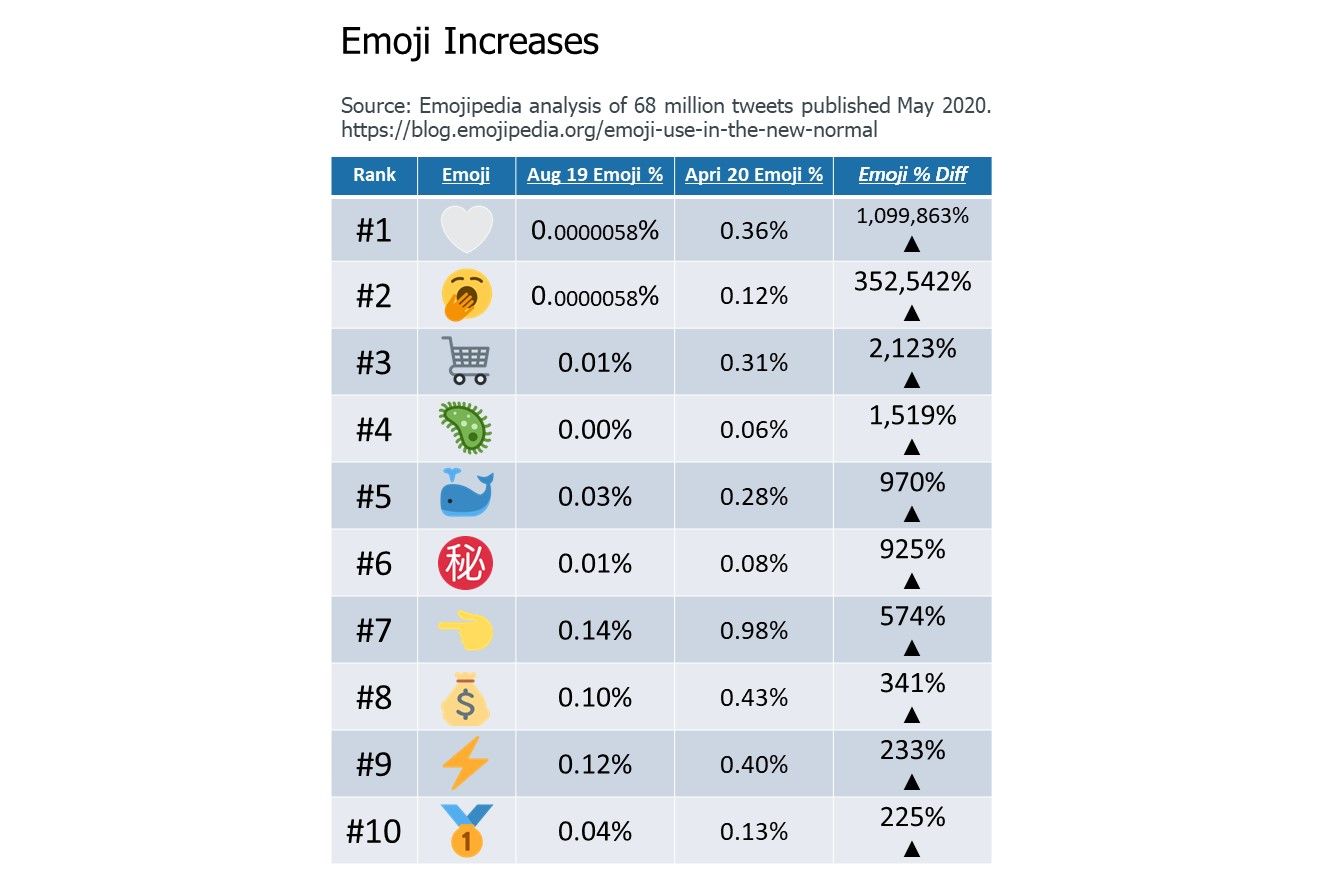 Finally, which emojis are decreasing in popularity in recent times?

Looking at emojis with over 1,000 usage instances that experienced the largest relative decrease in use shows a mixed bunch.

The emojis which dropped in use the most significantly from August 2019 to April 2020 are:

The reason for ☔️ Umbrella with Rain Drops or 🔵 Blue Circle losing so much ground is not clear, but the suspension of many professional sports in 2020 could be behind the dropping ⚽ Soccer Ball, ⚾ Baseball.

✈️ Airplane has seen its use halve in the period assessed, though some of that change will be due to seasonal factors noted in our category analysis. 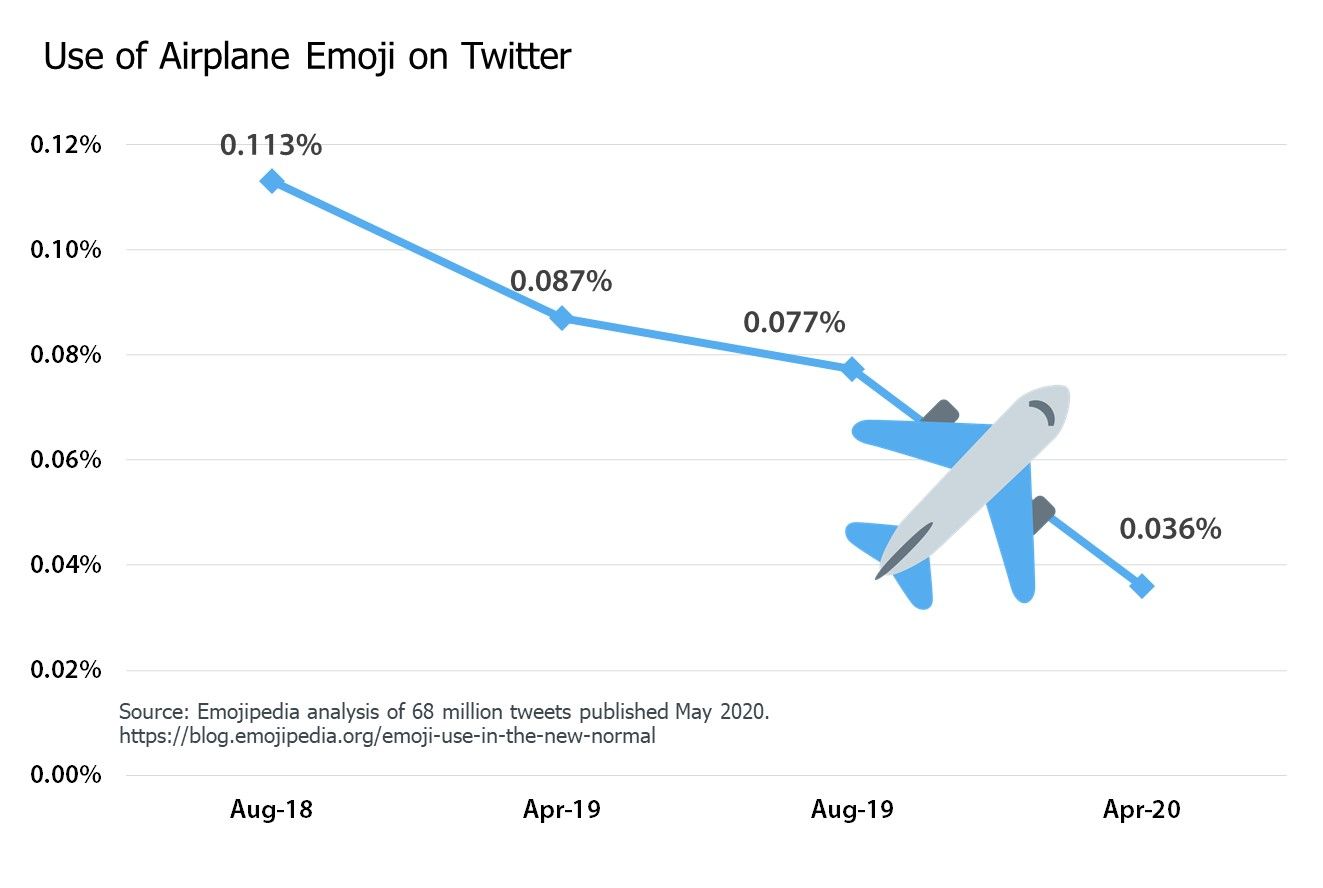 🇮🇳 Flag: India dropping in use can be explained by Independence Day in India being held during one of the assessed periods, but not the other.

➰ Curly Loop would require additional analysis to determine if there were social campaigns or alternative uses of this emoji which may have led to its decline.

The relative change in use of each emoji is shown below. 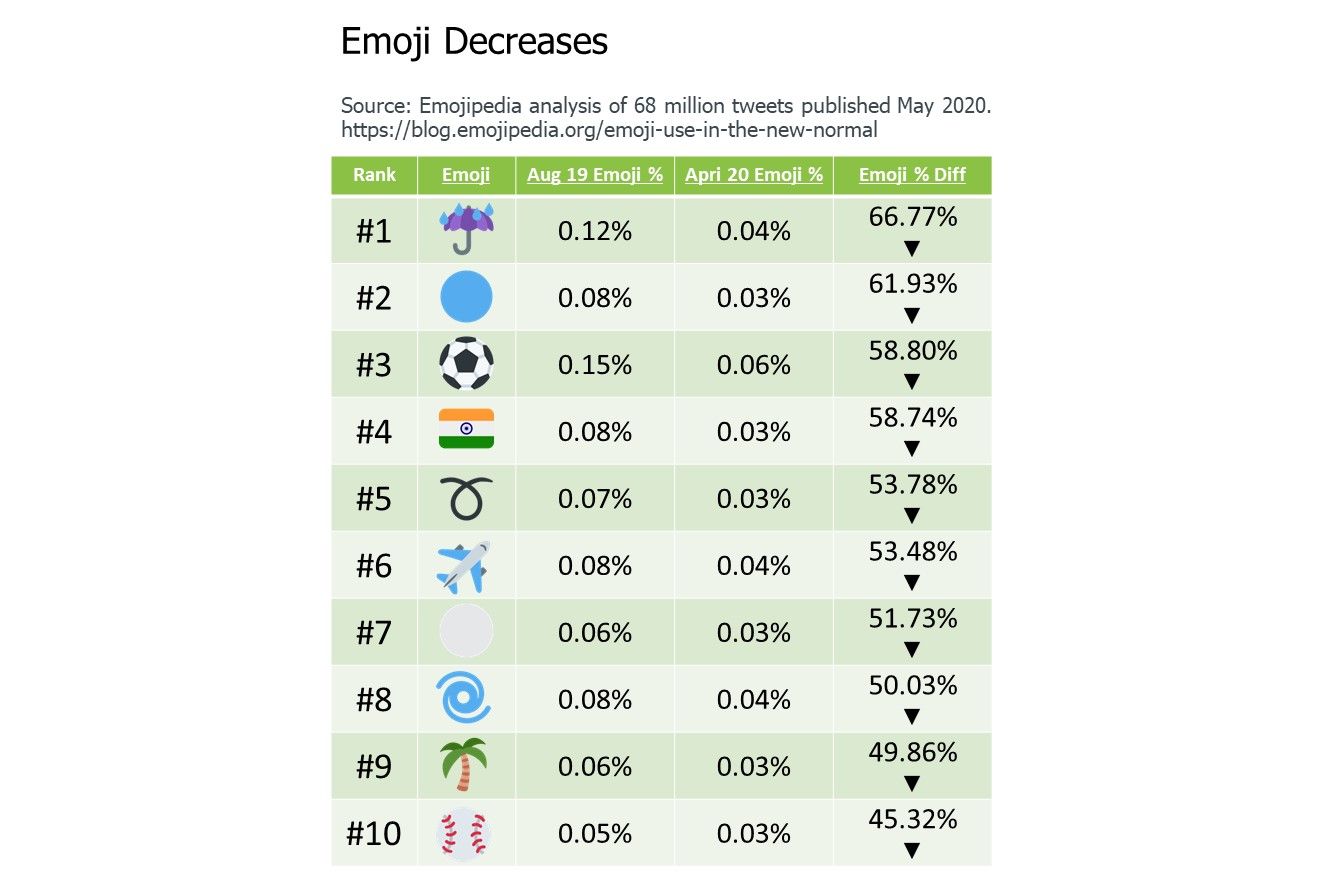 Following an analysis of over 68 million tweets across four time periods in 2018, 2019 and 2020, we made the following findings:

As with any data, many of these figures can be read in different ways. It's clear in the real world that our new normal is continually changing.

If, how and when the changing planet affects our digital communications is something that remains interesting to watch. Whether we use our digital lives to reflect our real lives, or as an escape from them may also vary by individual, and social media platform.

The insights shared here are using Twitter data due to the public nature of the platform, so are inherently unable to determine whether private messaging conversations have seen similar shifts.

There are indications here that positive emoji use remains high despite the difficulties faced by many. Regardless of how you express yourself online, take care out there 💕