Is there light at the end of the tunnel for Android users tired of missing out on the latest emoji releases? An announcement from Google today talks of bringing emoji update features into a popular app library, with the goal of ensuring more apps get new emoji support, sooner.

There have long been two tiers of Android users. Those who get new emoji updates promptly, and those who languish looking at blank boxes whenever there's a new emoji update.

Above: an outdated Android message app on a Samsung device, unable to render emojis from January 2020.

Google has been mindful of this issue, surely knowing that users get immensely frustrated if their phone doesn't support new Android updates, and thus no new emojis.

While Google's own first-party Pixel phone gets frequent software updates, that's not the case for a considerable number of other Android OEMs.

Haven't I heard this before?

If talk of an library to allow apps access to the latest emoji releases sounds familiar, that's because it is.

Released in 2017, EmojiCompat was intended to solve Android's emoji problem.

Above: EmojiCompat was released in 2017 with a goal of new emoji support for apps.

Fast forward to 2018 and EmojiCompat remained missing from many popular apps.

All this work wasn't for nothing. As part of Google's effort to decouple emoji updates from operating system updates this latest announcement brings these emoji updates to an existing library, that many apps use.

This change was first signalled by Google in May 2021:

"All user-generated content in your app contains 🎉, and supporting modern emoji is a key part of making your app ✨! The EmojiCompat library, which supports modern emoji on API 19 and higher, has moved to a new artifact :emoji2:emoji2, which replaces the previous :emoji:emoji artifact. The new emoji2 library adds 🪄 automatic configuration using the AppStartup library (you don't have to add any code 👩🏿‍💻 to display 🐻‍❄️)!"

"Starting this fall, all apps that use Appcompat (a tool that enables Android apps to be compatible with several Android versions) will automatically get the latest and greatest emoji. Meaning you won’t have to wait for the next OS release or rely on individual app updates."

Platforms like Instagram and Snapchat are among those using EmojiCompat today. When Samsung devices users open these apps, they will will see Google's Emoji 13.1 emoji designs when 😮‍💨 Face Exhaling, 😵‍💫 Face with Spiral Eyes, or ❤️‍🔥 Heart on Fire are encountered. 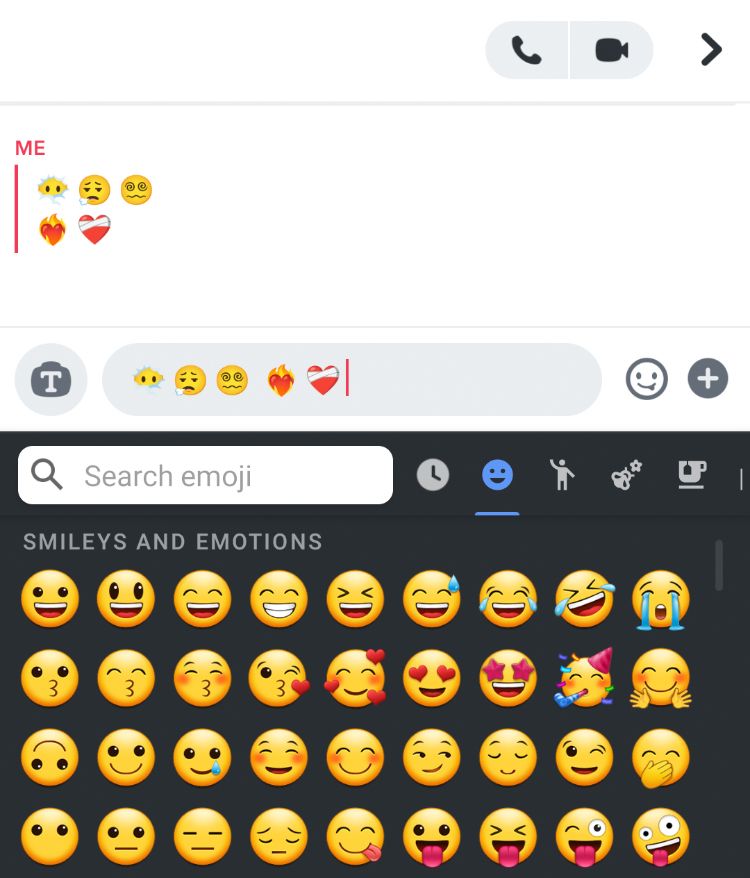 Above: Google's Emoji 13.1 designs appearing in Snapchat on Samsung's One UI 2.5 thanks to EmojiCompat.

The reason for the two emoji designs is because Samsung has yet to release their Emoji 13.1 support, while Google's has been available since the end of last year and has been incorporated into EmojiCompat.

In the wake of this announced expansion, it would be remiss of us not comment specifically on Gmail, which has been lacking any kind of emoji update for a number of years.

Despite being one of the earliest platforms to include its own custom emoji set, the email service hasn't recevied an emoji update since 2016.

Prior to this news, Gmail's emoji support was limited to emojis introduced in August 2015, displaying them in Android 7.0's blog designs.

Due to the nature of emoji gender and skin tone sequences, this outdated emoji support often lead to reports of Gmail's emoji support being "broken". 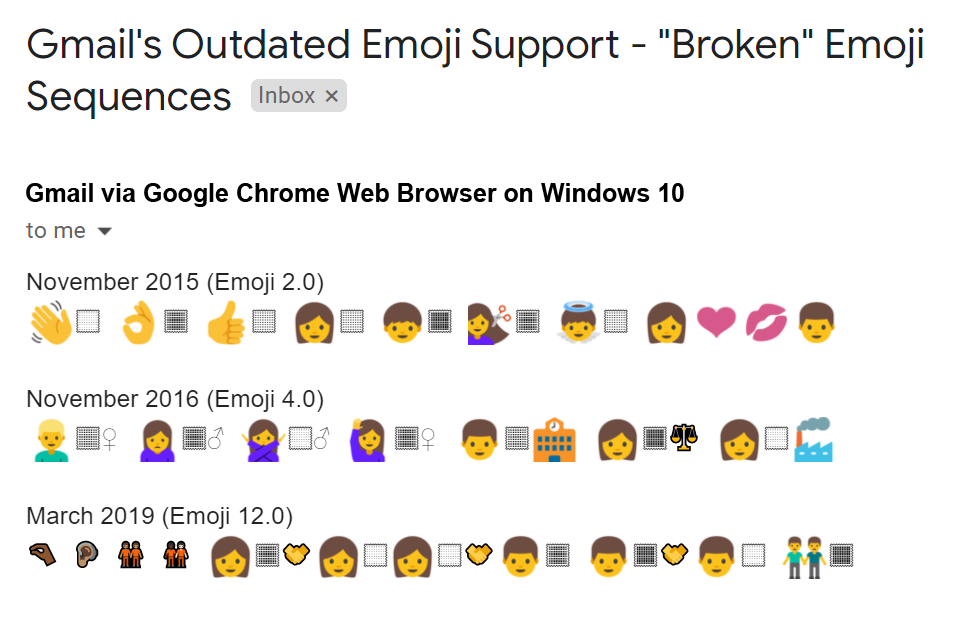 Above: examples of "broken" emoji skin tone and gender sequences within Gmail when accessed via the Chrome Web Browswer for Windows in March 2021.

This is now set to change, with Gmail to include all 3,521 of Unicode's emoji recommendations later this month, brining the email platform's emoji support in line with Chrome OS, YouTube Live Chat, and Google Chat.

In celebration of World Emoji Day, Google also released their latest emoji udpate, with rollout coming to select Google platforms this month, and Android 12 upon release in the Northern Hemisphere fall/autumn.

Above: a variety of the new emoji designs that will soon be available across Gmail, Google Chat, YouTube Live Chat, and Chrome OS.

Is the future bright for fast, frequent emoji updates on Android? Today's announcement is promising, and time will tell if Android devices not seeing new emojis becomes a thing of the past.