What does equality look like on the emoji keyboard?

Much progress has been made in recent years, with emojis that were once white and male[1] now offering a choice of skin tones and equal gender options.

Last year 100 new emojis were released to support combinations of people holding hands, with each allowing a different skin tone. 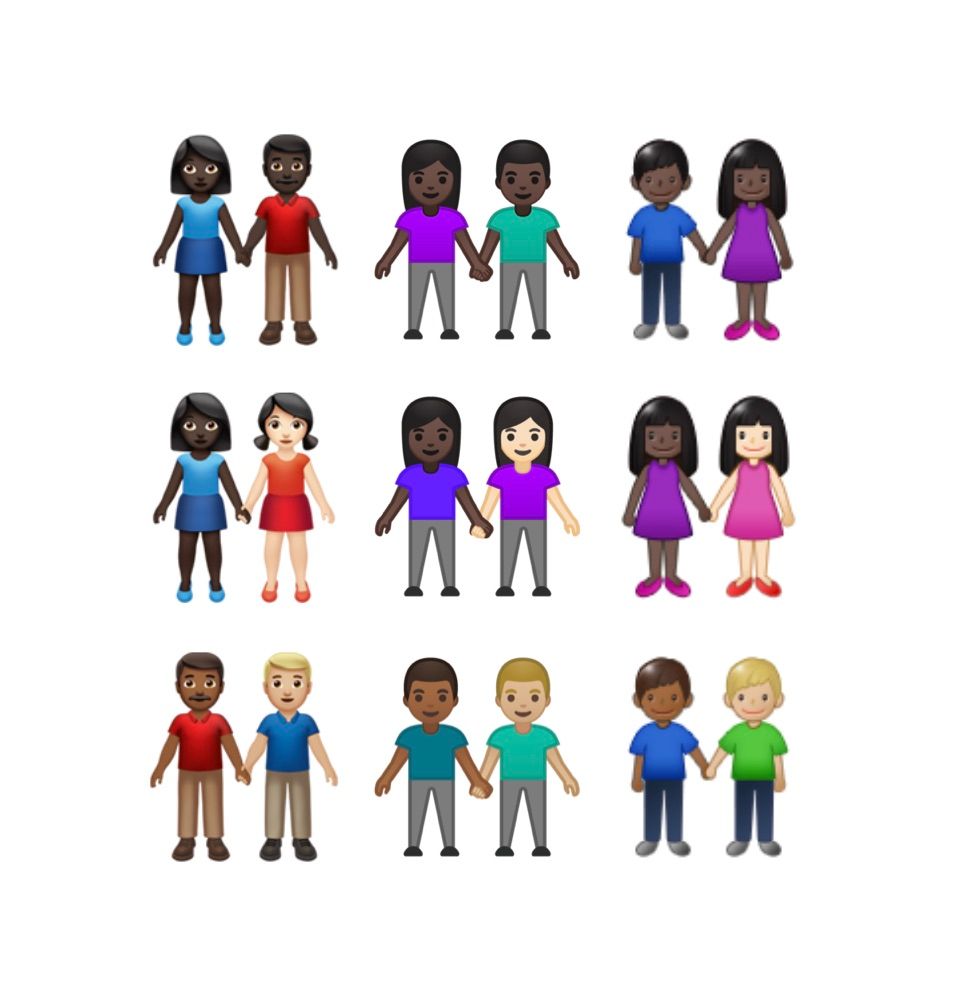 But what about the families? 26 family units now sit on the emoji keyboard, and to the increasing confusion of users, none permit a change of skin tone on most platforms.

The finding of the report was that the status quo remains the preferred option.

That is: no new family emojis for the forseeable future.[3]

Above: Unicode has decided against skin tone support for family emojis. Image: Emojipedia mockup based on Apple designs.

What is the problem?

Families are currently shown on most major platforms as default yellow.[4] This color is intended to represent a non-human skin tone. The families aren't white, nor are they black. At least that is the intention.

Black Families have been a consistent request from Emojipedia users for a number of years, and a casual glance at Twitter shows this is consistently viewed as an oversight.

It seemed only reasonable that people might have assumed black or mixed families could be up next. After all, nearly every other emoji with a default yellow skin tone now supports all five skin tone modifiers permitted in the Unicode Standard.[5]

"Why does Emoji Corp think it's so much more important to represent a multicultural boy band 👱‍♂️👱🏻‍♂️👱🏼‍♂️👱🏽‍♂️👱🏾‍♂️👱🏿‍♂️ than a beautiful, diverse family?" pic.twitter.com/OPgxWTquTo

A recent study from Alexander Robertson, Walid Magdy, Sharon Goldwater of Edinburgh University found that people with light skin are more likely to use the default (yellow) skin tone than any other group.

Meanwhile in the same study:

There can be many layers to how an emoji can be used and for what purpose, but it is quite apparent that white families can more easily use default yellow emojis for self representation compared to black families. 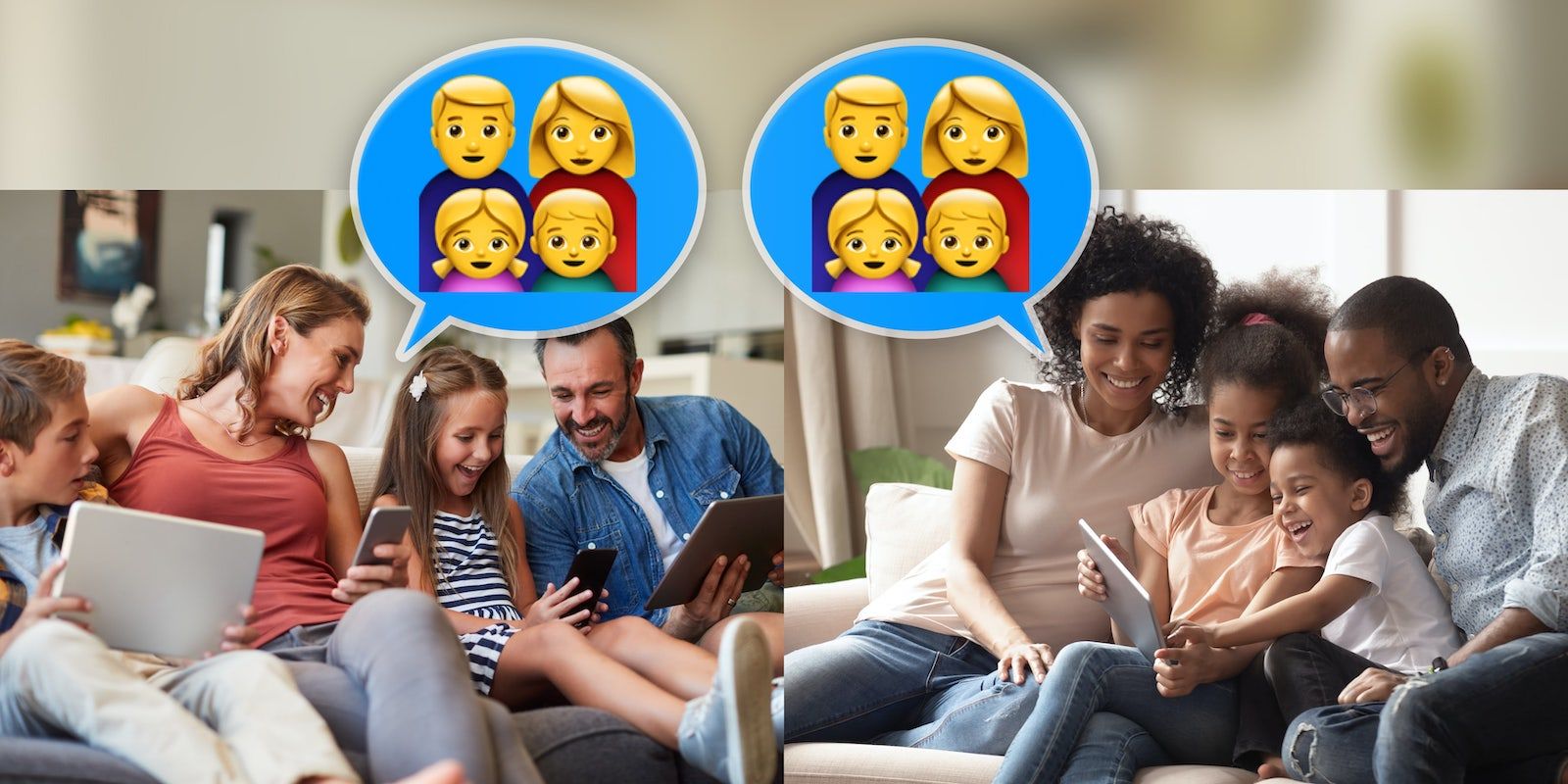 Seven unique options were looked at by Unicode when it came to the challenge of adding skin tones to families.

One option assessed was to support modifier options for each family member, allowing any mix of skin tones. This was part of a proposal from 2019, which recommended 7,230 new emojis required to allow families to have the same flexibility afforded to the couples holding hands. 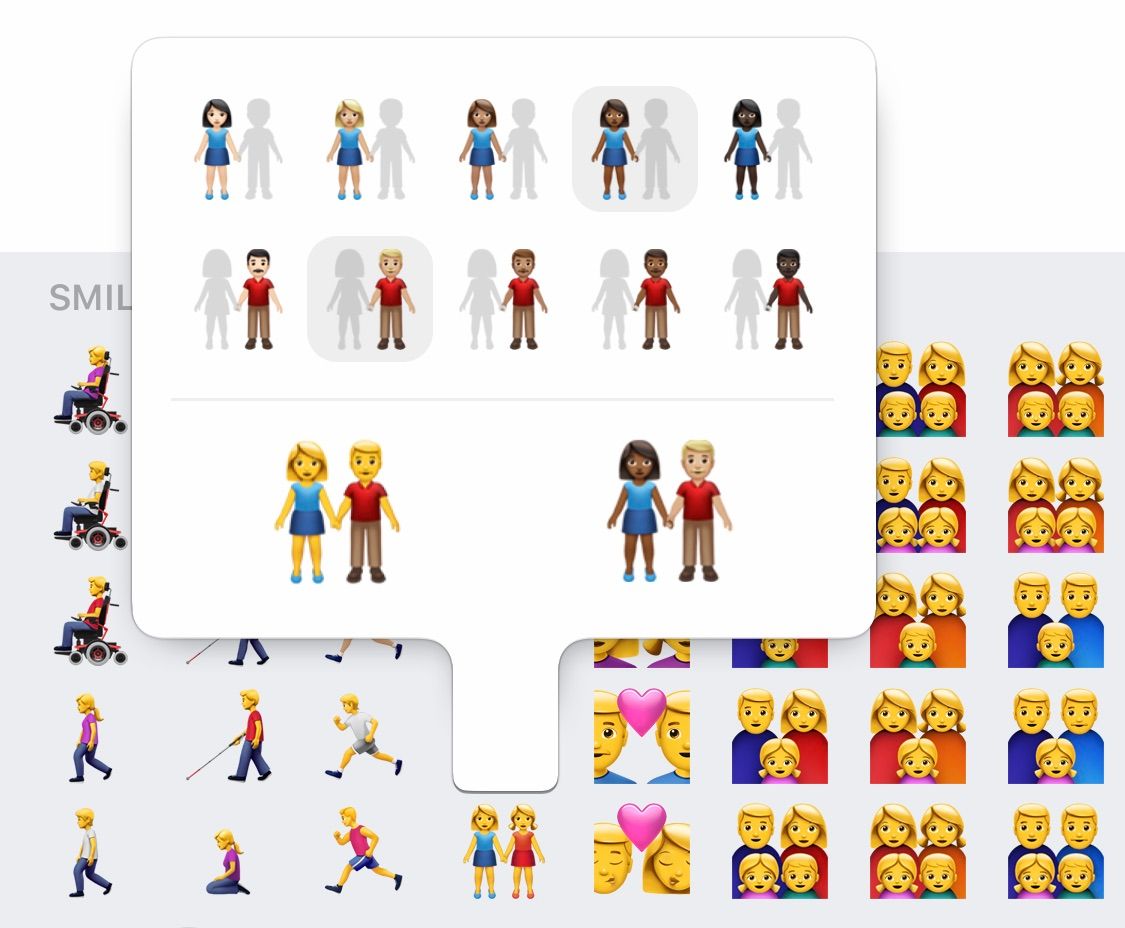 Above: Apple's emoji picker with the multi-skin-tone selector added in 2019.

Another possibility is to limit the choice to only three of the five skin tone options for each family member. Or to allow only one family to gain mixed skin tone support (e.g. allowing 👨‍👩‍👧‍👦 Family: Man, Woman, Girl, Boy to have skin tone options) with the others remaining as-is.

The current view from the report is that these all are unsuitable options, for different reasons.

The former was declined for technical reasons (over 7,000 new emojis would truly be strain for some platforms to handle, especially when supporting older devices), and the latter for pragmatic reasons (if you only add some skin tones or some families, the exclusion only shifts around).

Microsoft in 2016 did add every single family combination, as a possibility in Windows 10, helped by the vector emoji font Segoe Color Emoji.[6]

An option raised in the Unicode report is the idea of a consistent "uniform" skin tone, where each family member would be implemented with the same skin tone as the others.

This option would only require 135 new emojis. With over 7,000 emojis needed for mixed skin tone support, 135 seems a positively tiny set of additions by comparison. 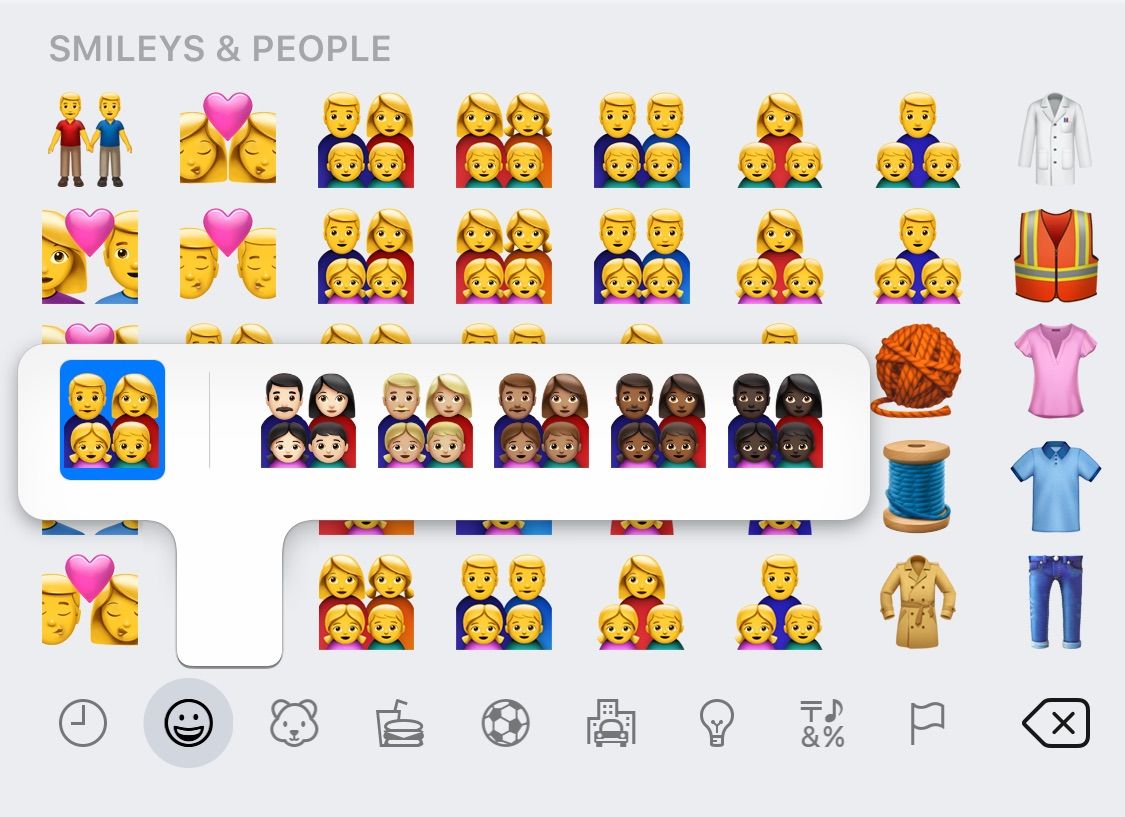 Above: Mockup of an iOS emoji keyboard if Uniform skin tones were implemented. Image: Emojipedia mockup based on Apple designs.

The report from Unicode declines the Uniform Skin Tone option in part due to:

Unicode does not restrict any individual vendors from extending skin tone support to any any grouping, though without widespread cross-platform support, it's relatively inadvisable to implement emoji sequences that won't display correctly on other platforms. 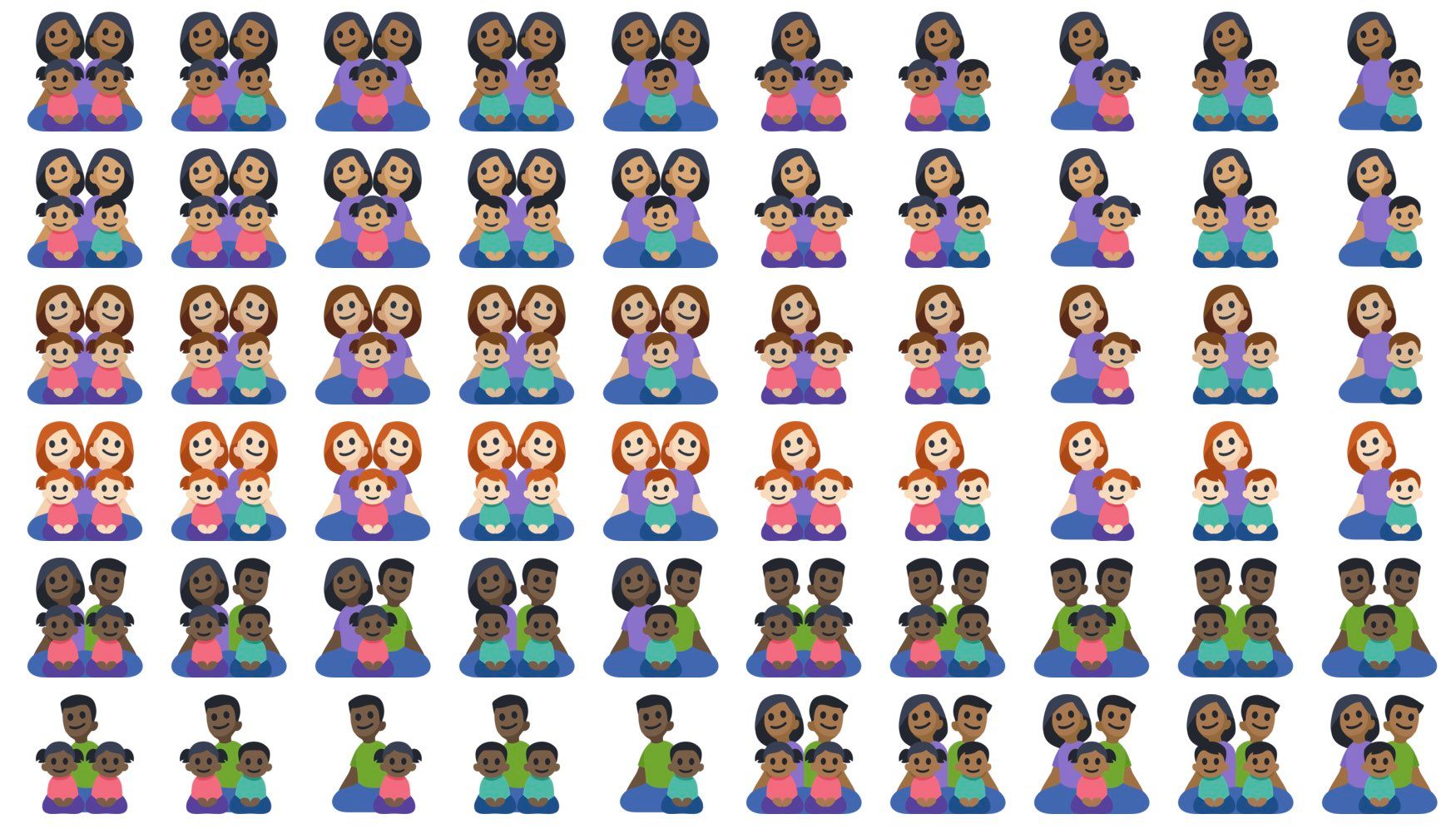 Above: Skin tone options for families have been on Facebook since 2017.

The entire document on family skin tone combinations is a helpful read to get up to speed on the reasoning behind declining each option.

The recommended option that has been chosen: the status quo. The yellow set of families, just as they appear today. 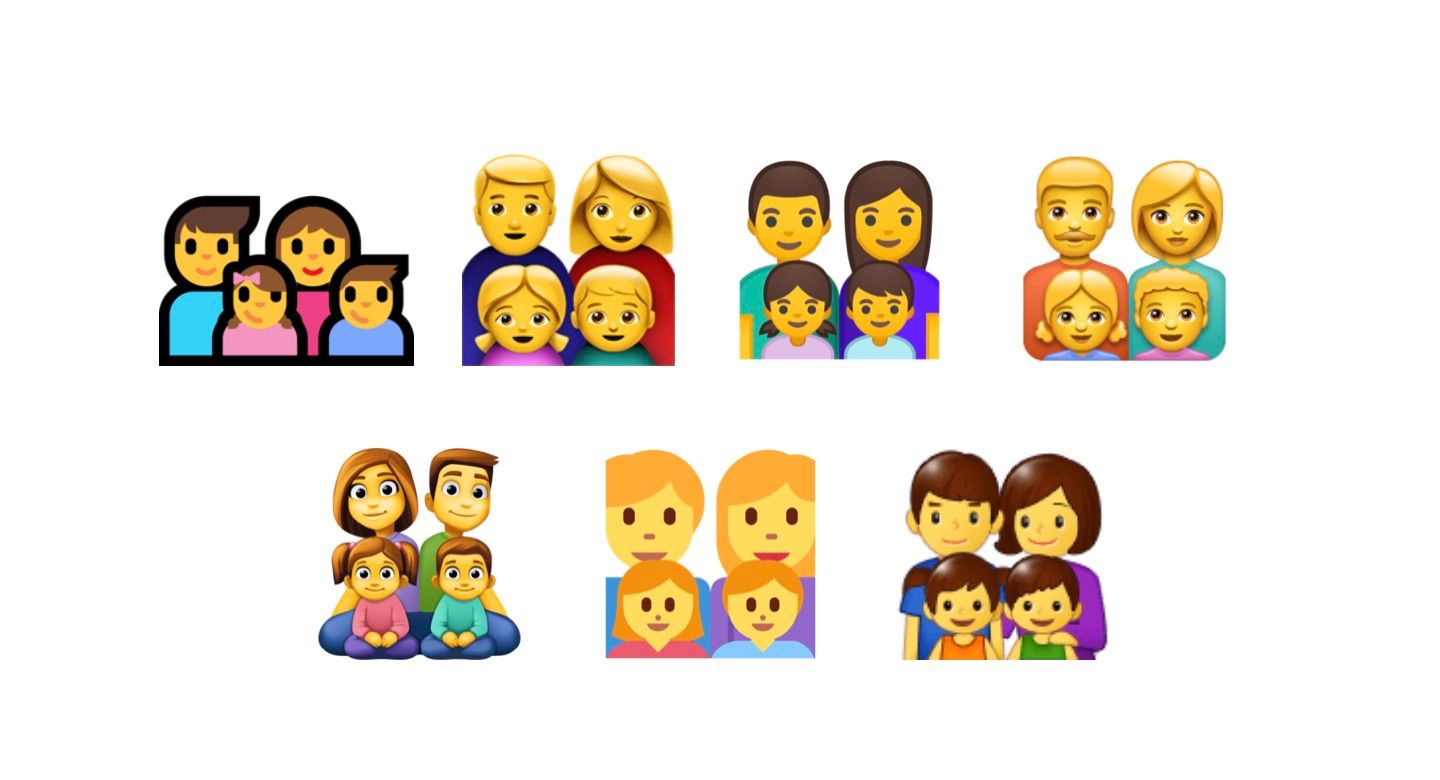 As with any committee or standards body, there is an interest in ensuring all member views are represented. Having Unicode recommend changes that aren't supported by vendors only results in documentation being out of sync with reality.

To that end, this report is useful as a reflection of where the consensus lies today.

I do think it's worth taking a closer look at one option in this report. One that might have more merit than is first apparent.

There is one simple way out of this problem. An implementation that is unlikley to win any fans, but is technically feasible and fair to users.

To recap, the prevailing view right now is that it is:

a. technically impractical to add thousands of family emojis, and
b. undesirable to add just a subset of families

c. what if the families just weren't yellow any more?

Consider the impact if the family emojis showed up as plain silhouettes on the keyboard instead of yellow families.[8] 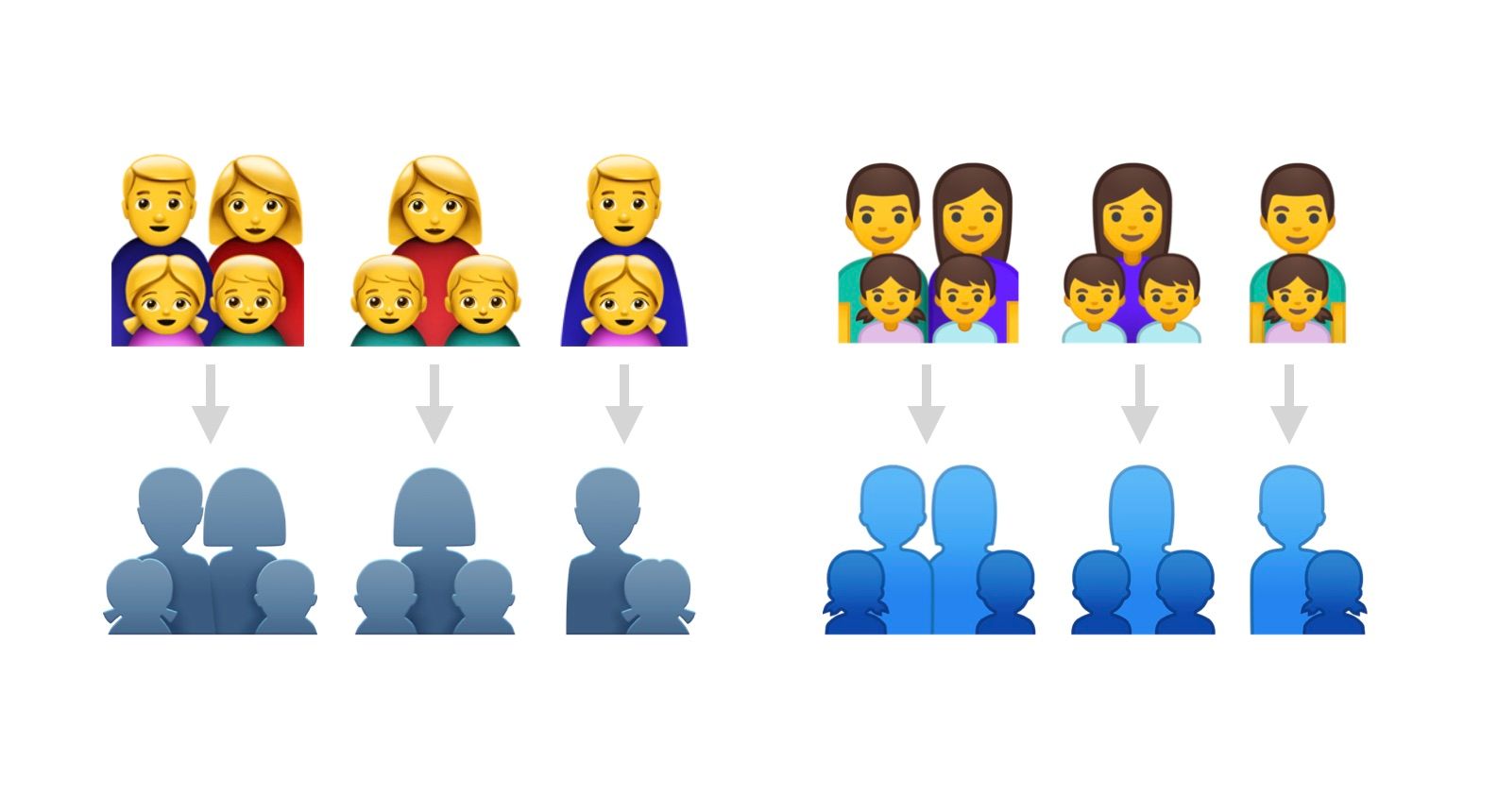 The Unicode response to this possibility is that:

It is true that silhouettes are less personal than semi-realistic people.

It's also true each silhouette family emoji could end up looking quite similar on the keyboard. They might be less popular as a result. They certainly aren't natural.

When it comes to emoji equality: it does not seem fair to leave a set of emojis on the keyboard that approximate a white family, while black families are left with nothing resembling their own family.

If the alternative is a less-useful set of families on the keyboard for everyone, so be it. 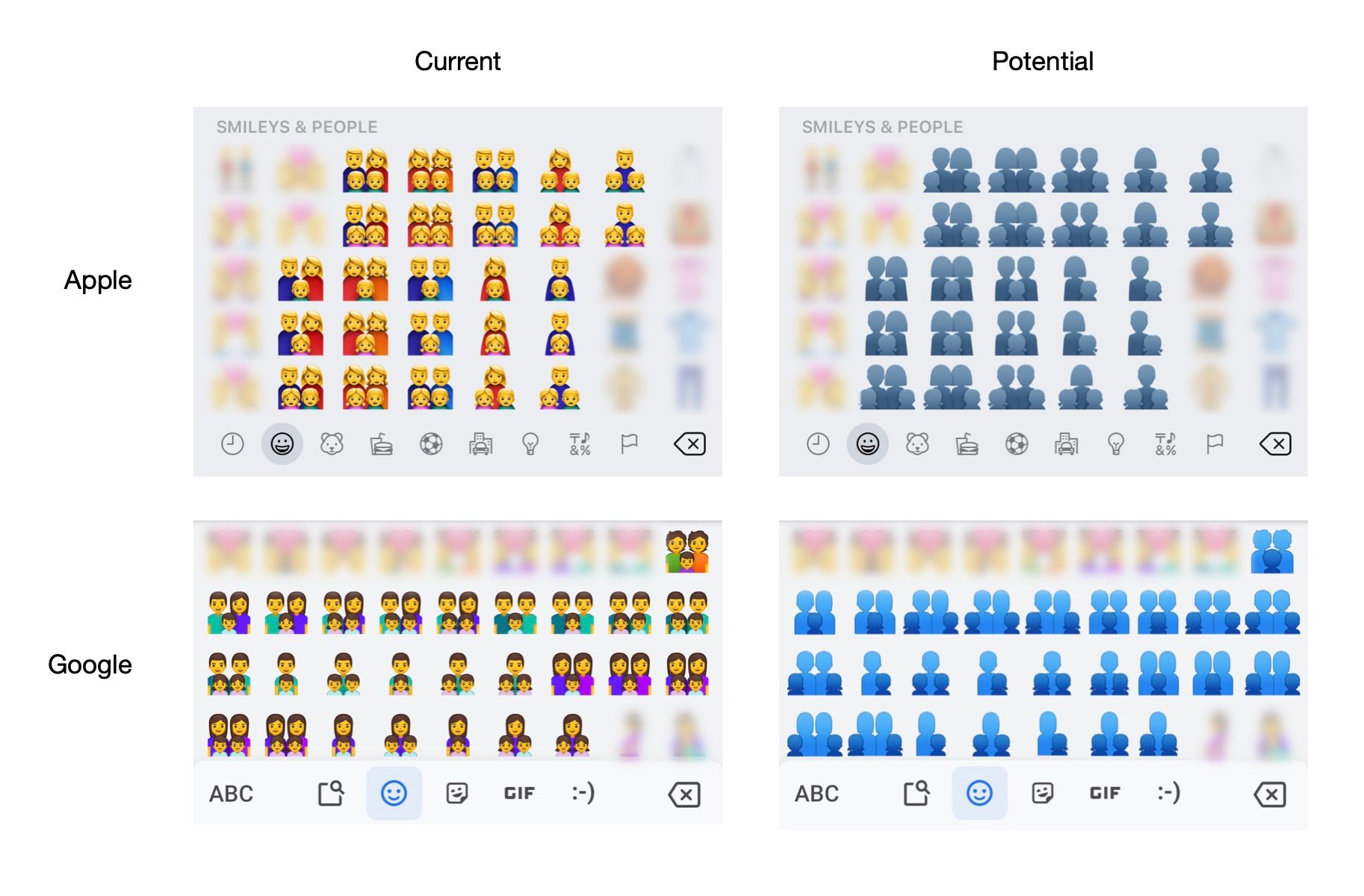 Above: Could a simple approach solve this issue? Images: Screenshots from iOS and Android (left) / Emojipedia mockups (right).

Some benefits of this approach include:

Generally when I cover the topic of family emojis, the strong view returning is that whatever the challenges, vendors should just get on with making a black family emoji.

The obvious choice ahead isn't clear, but it seems there is a public consensus that the status quo on the family emojis shouldn't remain indefinitely.