Details have today been released by the Unicode Consortium which cover how custom emoji attributes may allow new choices for gender, hair color and direction.

Provision for new flags including England, Scotland and Wales are addressed also addressed.

Some of the details get quite technical, so this summary aims to address many of the public-facing aspects.

Most of the information in this summary has been culled from the technical report from Mark Davis and Peter Edberg[1], and is subject to change.

Proposed emoji tag sequences allow gender for an emoji to be specified as:

If the neutral gender attribute is used, the emoji is to be shown without any gender-defining properties.

Google's already displays a gender-neutral Dancer[2] and Person Bowing Deeply, amongst others in their blobby-character series. 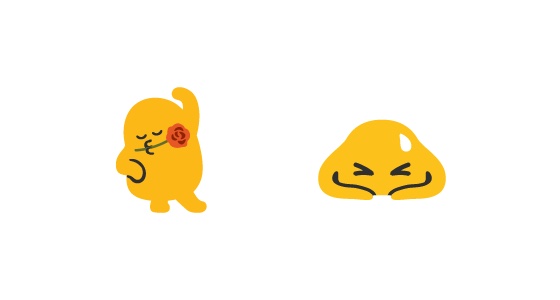 Above: Android already has gender-neutral emojis.

Specifically noted is the fact that changing emoji gender is to "mark appearance, and not gender identification".

Therefore if applying a female gender attribute to the runner emoji, you will get a "female-looking" runner[3]. 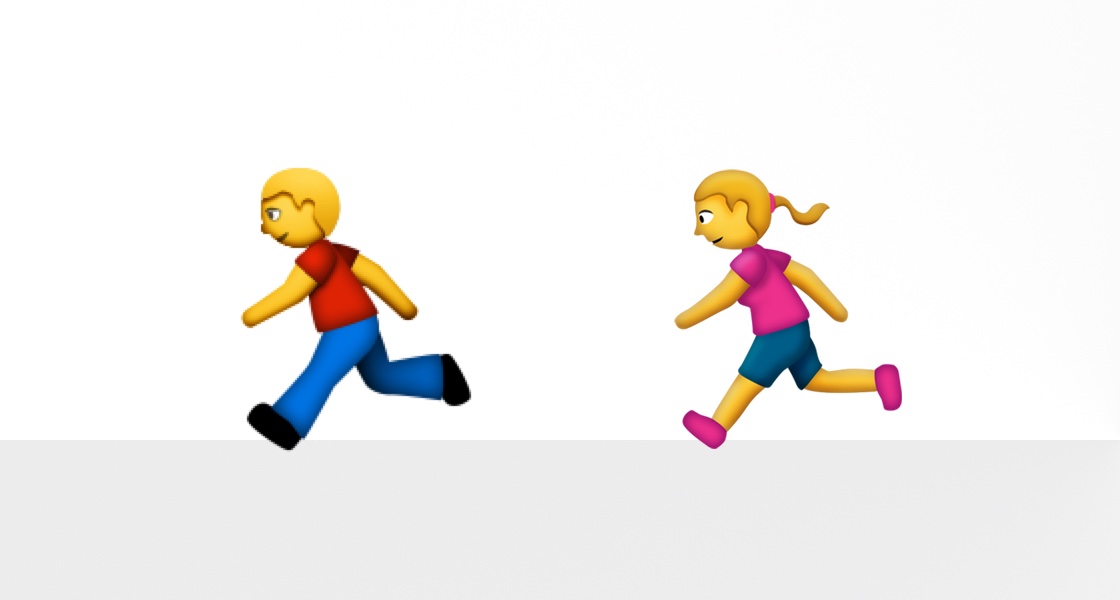 Above: A female runner emoji could be on its way.

Most human-looking emoji characters will be eligible for gender attributes. This would include emojis such as the Police Officer, Swimmer, Bicyclist and more[4].

Existing guidelines specify that neutrally-named emojis should be presented with a gender-neutral appearance, however this guideline only tends to be respected by Google's Android emoji set.

Even emojis with a specific gender in their character name would be permitted.

The name would not change, but the appearance would match whichever gender attribute was applied. 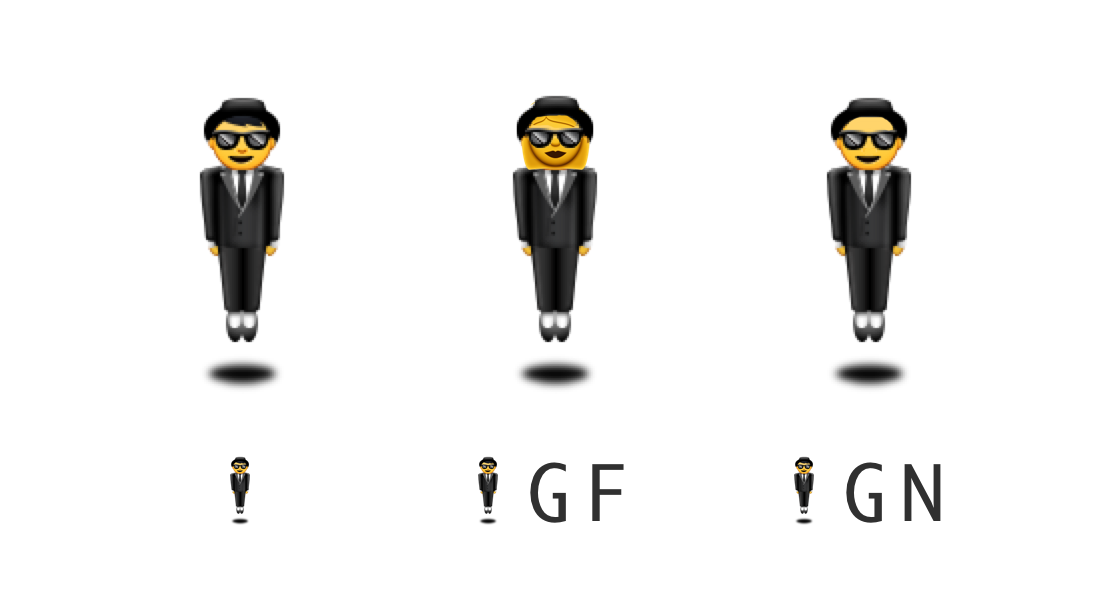 Above: Could this be our future family of levitators? R-L: Base emoji, Gender-Female, Gender-Neutral.

The same logic applies to any number of included emojis such as Bride with Veil and Woman With Bunny Ears.

I presume if implemented, the former would translate into a Man With Veil for consistency, as opposed to something akin to a Groom.

Part of the emoji tag sequences implementation is a mechanism to specify hair color.

What are the options?

The following hair colors are recommended as options:

Above: Mockup of how the six hair color attributes may look.

It's theoretically possible to mix and match skin tone modifiers with hair color attributes as part of this standard.

Gender could also be included in an emoji tag sequence, allowing a hypothetical dark-brown skin, blonde-hair, male, information desk person emoji. Whether vendors are keen to support such a wide range of combinations is yet to be seen.

Finding an appropriate user interface to select such combinations, not to mention the potential size of a font file could make the hair color attribute challenging to implement.

New options for sub-region flags are proposed in this technical report. This fills some gaps for countries or regions ineligible for inclusion using the existing standard.

The creation of flags for England, Scotland and Wales would all be possible.

These three flags are frequently requested by Emojipedia users in particular, and presumably also high on the list of requests to platform vendors. 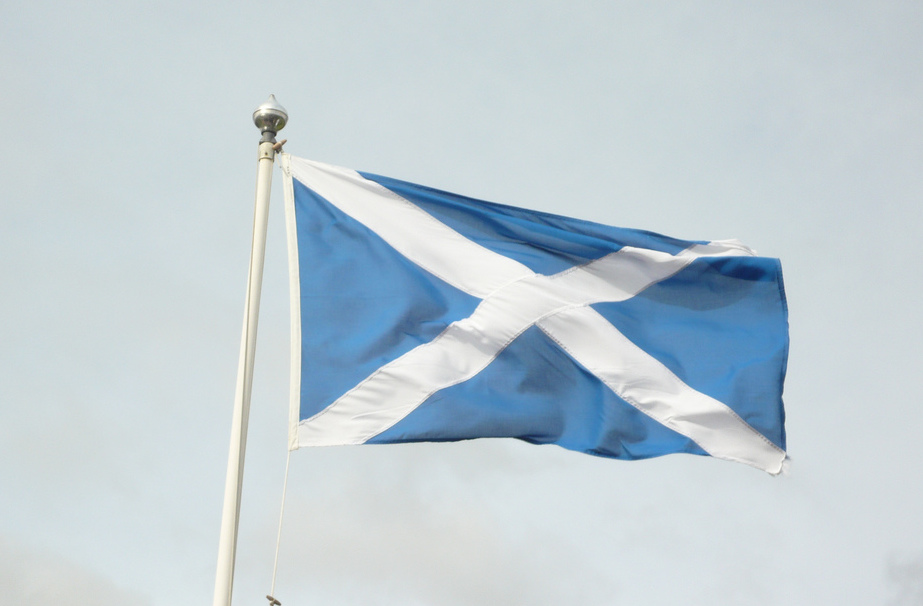 Above: This proposal would permit a Scottish Flag emoji. Photo source.

As with all aspects of this technical report, it's entirely up to vendors which parts they implement.

Each new flag must fall under an existing region that has a two-letter country code. As such, arbitrary flags wouldn't be eligible for this method of encoding[5].

Above: Recognized sub-regions are the only permitted use of this new flag type.

Direction attributes will allow an emoji to either:

The intended use is to horizontally flip characters such as the 🔫 gun or 🚶 walker in order to convey meaning[6] from the way it faces.

No options are provided for up / down directions, or 3D-awareness of forward/back (toward screen/away from screen). 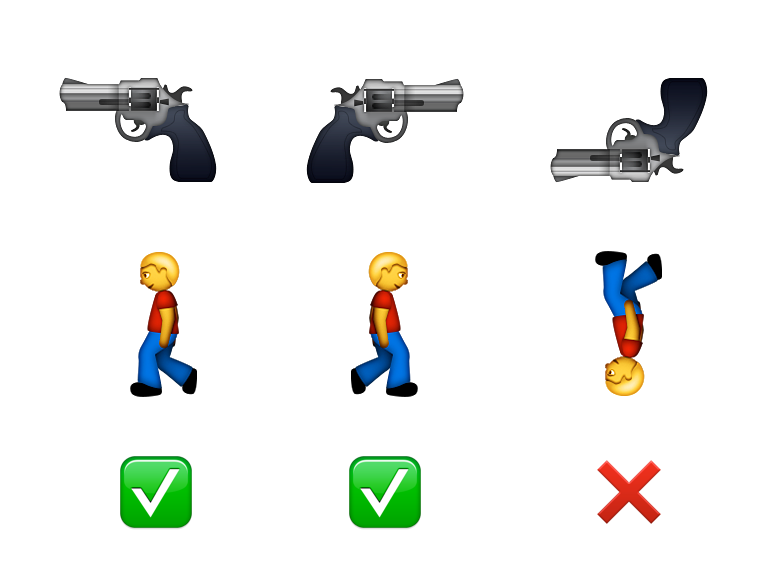 Above: Horizontal flip would be permitted, but not vertical.

There's plenty of implementation details in the technical report which cover how this would work in practice.

Much of it isn't of much relevance for those not involved with implementation details, but there are some interesting tidbits within the report.

Similar principle, but not the same implementation.

A modifier directly follows a character and changes the skin tone of the emoji prior to it.

Attributes differ in that they first specify what is to be modified - gender (G), hair (H), direction (D) or sub-region flag (F) - and then specify which attribute is to be used.

Whether these attributes are all supported by Apple, Google, Microsoft or others is completely optional. The technical report states:

This is similar to how all emoji support works right now. Unicode will approve emojis for use, but it's up to each platform to decide which characters or features they wish to include.

At the time of writing, Google doesn't support modifiers for skin tone in the latest version of Android 6.0.1, despite their adoption on iOS, OS X and Windows.

When can I get it?

This technical report is now available for public review. If it goes ahead, it's possible we could see vendors support the new attributes later in the year.

Feedback about this proposal can be directed to Unicode via Public Review Issue #321.

Update: work on UTS-52 has been temporarily suspended since the time of publishing this article. A new proposal specifically addressing flags for England, Scotland and Wales has been submitted to Unicode.