Google today launched Android 6.0.1, which is the first release from Google to include new emojis since Android 5.0 was released in November 2014.

This update contains 184 new emojis and changes to 48 existing emojis such as the celebrating hands and pile of poo.

Android now supports all approved emojis, with the notable exception of emoji modifiers which remain absent in this update.

Every emoji from the Unicode 7.0 and Unicode 8.0 updates now displays on Android. This includes all of the popular recent additions such as ice hockey, hot dog, middle finger, lion, and more.

🕴 Man in Business Suit Levitating is an emoji that has been amusing and baffling many since the release of iOS 9.1 and is now also available on Android, along with the 🕵 Sleuth or Spy and 🕳 Hole.

New emojis on Android have been designed with a (mostly) consistent shape and orientation between iOS and Android, which is a change from the previously divergent approaches. 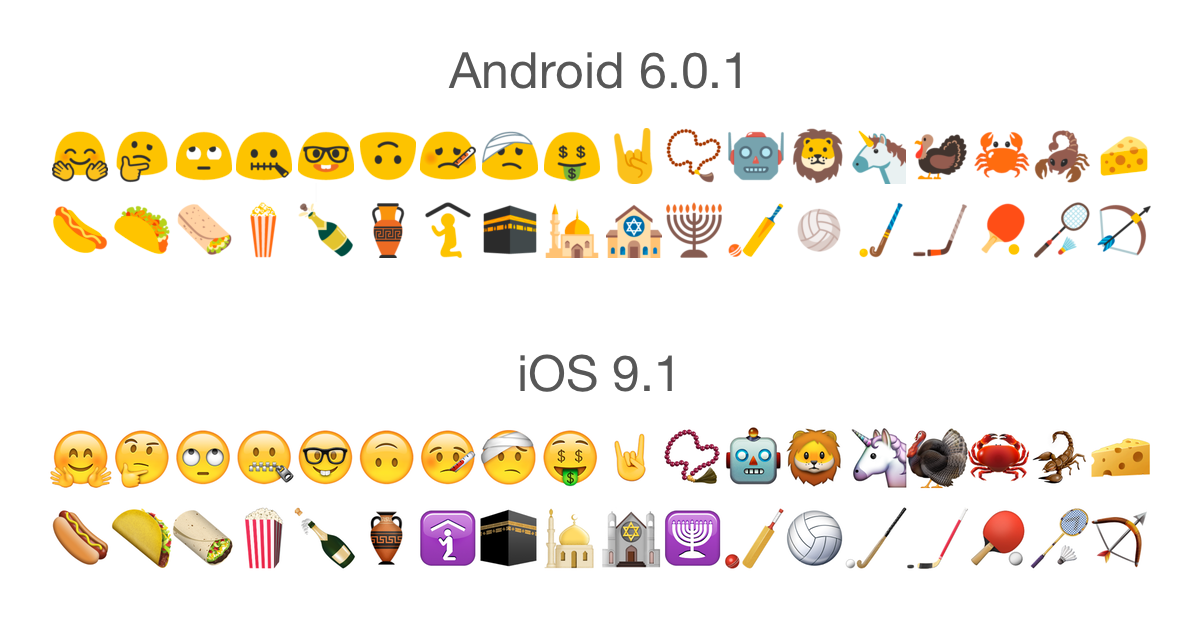 Above: Every emoji from Unicode 8.0.

Despite the similarities, the designs remain distinctive on each platform. Android continues to use mostly-flat shades and thick lines, while iOS has kept a glossy (sometimes photorealistic) appearance.

Also supported in Android 6.0.1 are retro-actively emojified Unicode characters such as the Radioactive Sign and Keyboard, and more. These mostly come from Unicode 1.1, and show on older versions as black and white glyphs.

😯 Hushed Face loses the zipper-mouth, and adopts a similar appearance to iOS - a little bit startled.

😌 Relieved Face looks less tired, and now has a drop of sweat on the brow.

😬 Grimacing Face no longer appears angry and menacing. Matches closely with the same emoji from Apple.

😳 Flushed Face gets a wide-eyed "what have I done" look, compared to the sheepish embarrassment of the emoji it replaces.

🙌 Person Raising Both Hands in Celebration removes the person from the emoji, and now only shows the raised hands gesture, minus the person.

🙏 Person With Folded Hands also takes out the person and shows an image now very similar to the iOS version of this emoji.

💅 Nail Polish displays the act of polishing nails, instead of just a nail polish bottle.

All hand gestures are no longer pink, and now use the default-yellow skin tone matching the human and smiley characters. 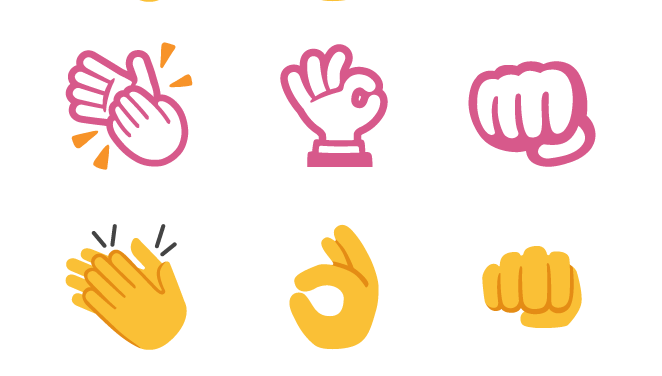 Above: Pink hand gestures (top) have been replaced with yellow skin tones in Android 6.0.1 (bottom).

💋 Kiss Mark has changed orientation, and loses the gloss mark in the lower right. 👅 Tongue and 👄 Mouth lose their pink outlined appearance. Red doesn't often appear in the Android emoji color palette, but an exception is made for the lips on the mouth. 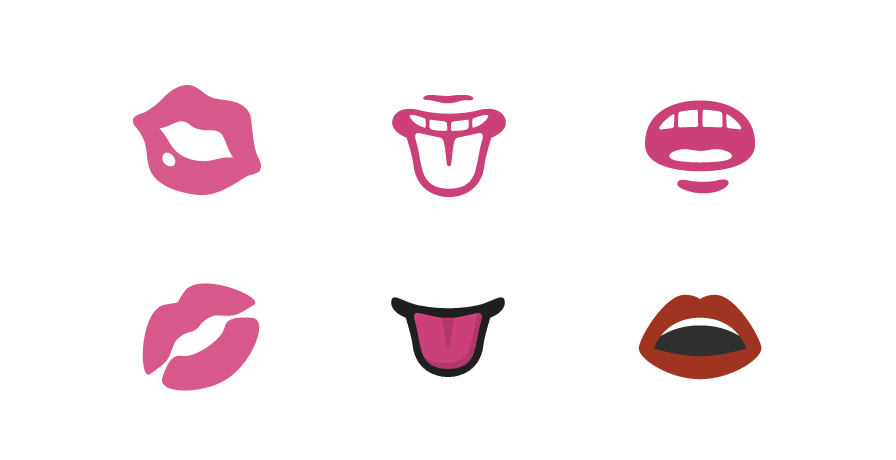 All the new gestures come in yellow right out of the gate:

At regular emoji sizes, you will be hard-pressed to figure out which families are which:

The emojis for couples have also been updated.

Previously, the 💑 Couple With Heart emoji showed as a gender-neutral "blob couple". This is now displayed as a man-woman couple, which is joined by new emojis for a man-man couple and woman-woman couple. 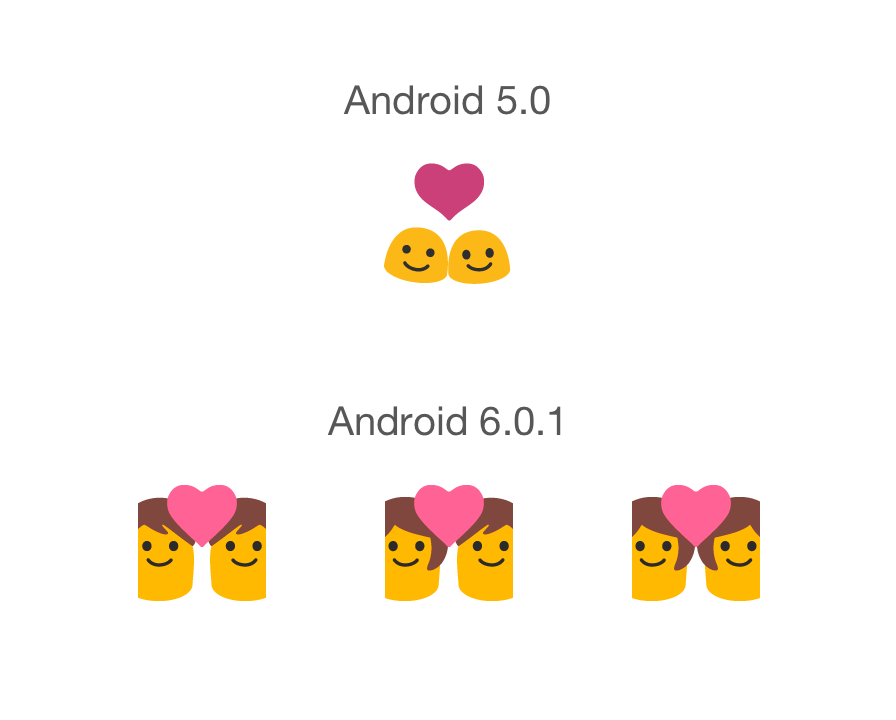 Above: The gender-neutral couple emoji of Android 5 has been replaced with three couple options. 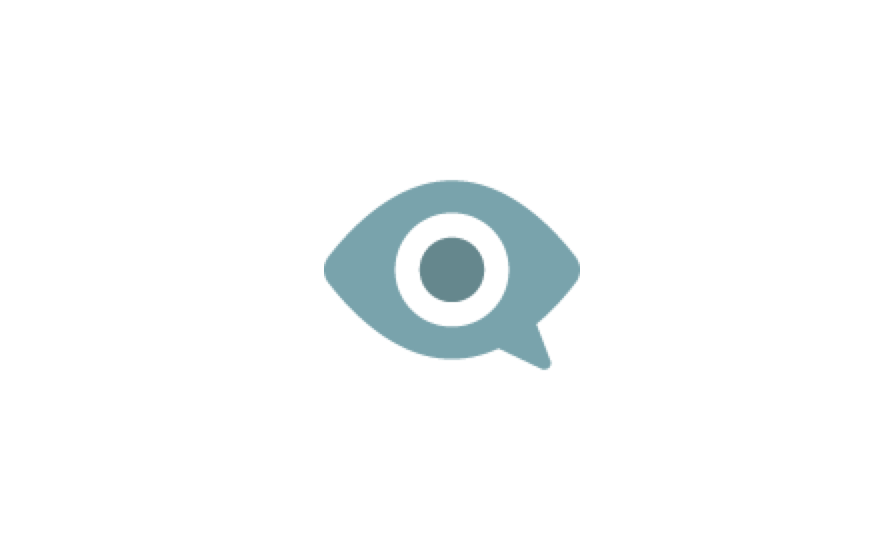 💩 Pile of Poo gets a smile! No more flies and stink lines for Android users.

🎱 Billiards now shows a single 8 ball, instead of cue and colored pool balls.

💺 Seat has changed to be closer to the intended use of this character as an airline or other transport seat.

👿 Imp takes on a more familiar shape, and matches the 😈 Smiling Face With Horns.

🎿 Ski and Ski Boot was previously a picture of two ski poles, and now shows skis with poles. Distinct from the new skier emoji.

🐭 Mouse Face got some whiskers!

📞 Telephone Receiver has been mirrored to face the opposite direction.

💘 Heart With Arrow has has the arrow pointing North-West instead of South-West.

✂️ Black Scissors now face down, and have a red handle.

🍑 Peach has been turned around the right way. It previously looked upside-down.

This is a substantial emoji update from Google, and the only obvious emoji functionality missing in this version is the diverse skin tone options.

When I asked about the omission, a Google representative told me that "[Google's] emoji faces are playful and are all about conveying the emotion you're feeling, they aren't designed to look human or reflect human characteristics".

This seems to indicate that this is not an oversight or technical limitation on Google's behalf, but time will tell if this is added in a future update.

These emojis actually hit Hangouts in advance of the Android 6.0.1 release. Gmail has also been updated now to include the latest emoji images.

Some differences exist between Android's emoji features, and Gmail/Hangouts. The web implementations of Google's emoji images don't render flags[2] on Gmail/Hangouts, nor do they support ZWJ Sequences which show the individual emojis instead of a combined character:

Above: ZWJ Sequences such as this don't render correctly on Hangouts.

For more about Android emoji, view every emoji in Android 6.0.1, or take a look at how other vendors such as Samsung, LG, and HTC are displaying their emojis.