Microsoft has added support for Emoji 11.0 in the latest update of Windows 10 known as the October 2018 Update. In addition to these new emojis, noteworthy modifications to earlier emoji designs are also included in this latest release.

Featuring 157 new emojis in total, users will find popular additions such as a mango, lobster, party face and redheads. 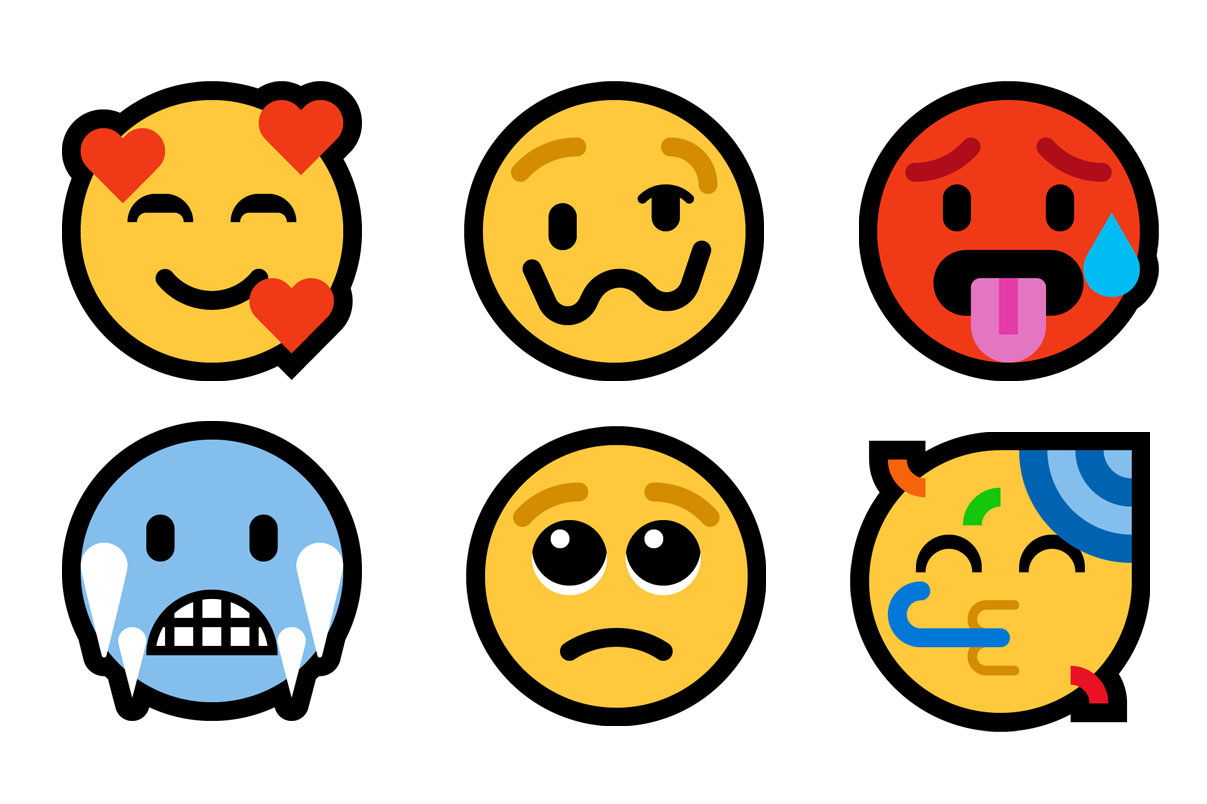 Above: Microsoft's designs for the six new smiley emojis from Emoji 11.0, including 🥰 Smiling Face With 3 Hearts and 🥶 Cold Face.

Microsoft first previewed this new set as part of the Insiders release in July 2018, and now join major vendors such as Twitter (Twemoji 11.0) and Google (Android 9.0 "Pie") in Emoji 11.0 support.[1]

Like recent updates from Samsung, Google and Twitter, this update also updates the vendor's 🔫 Pistol emoji to display a toy squirt gun / water pistol - a change which was telegraphed several months ago. 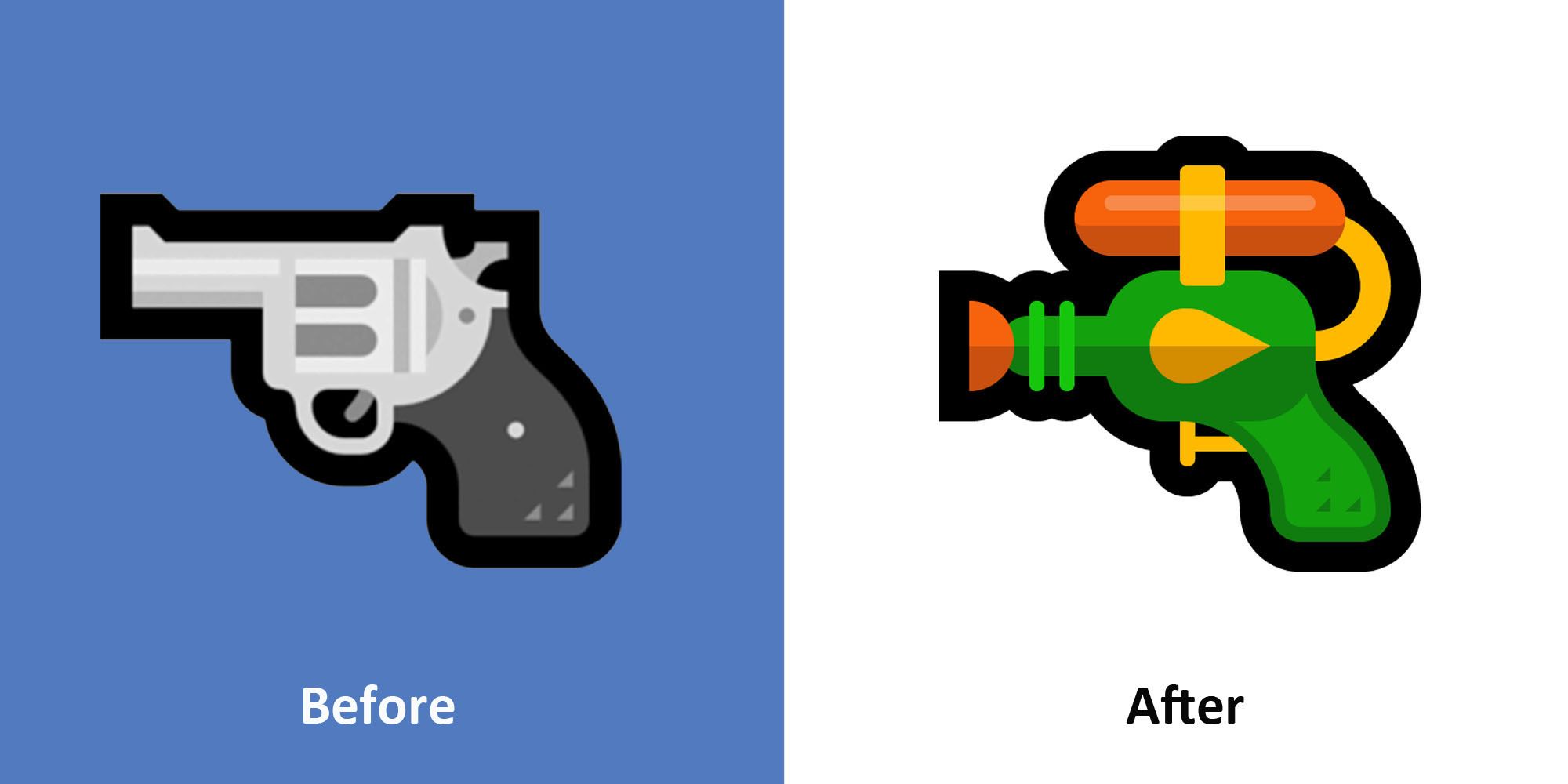 It was expected that before the end of this year all major vendors would display the 🔫 Pistol in this fashion, and with this update this expectation has been fulfilled. 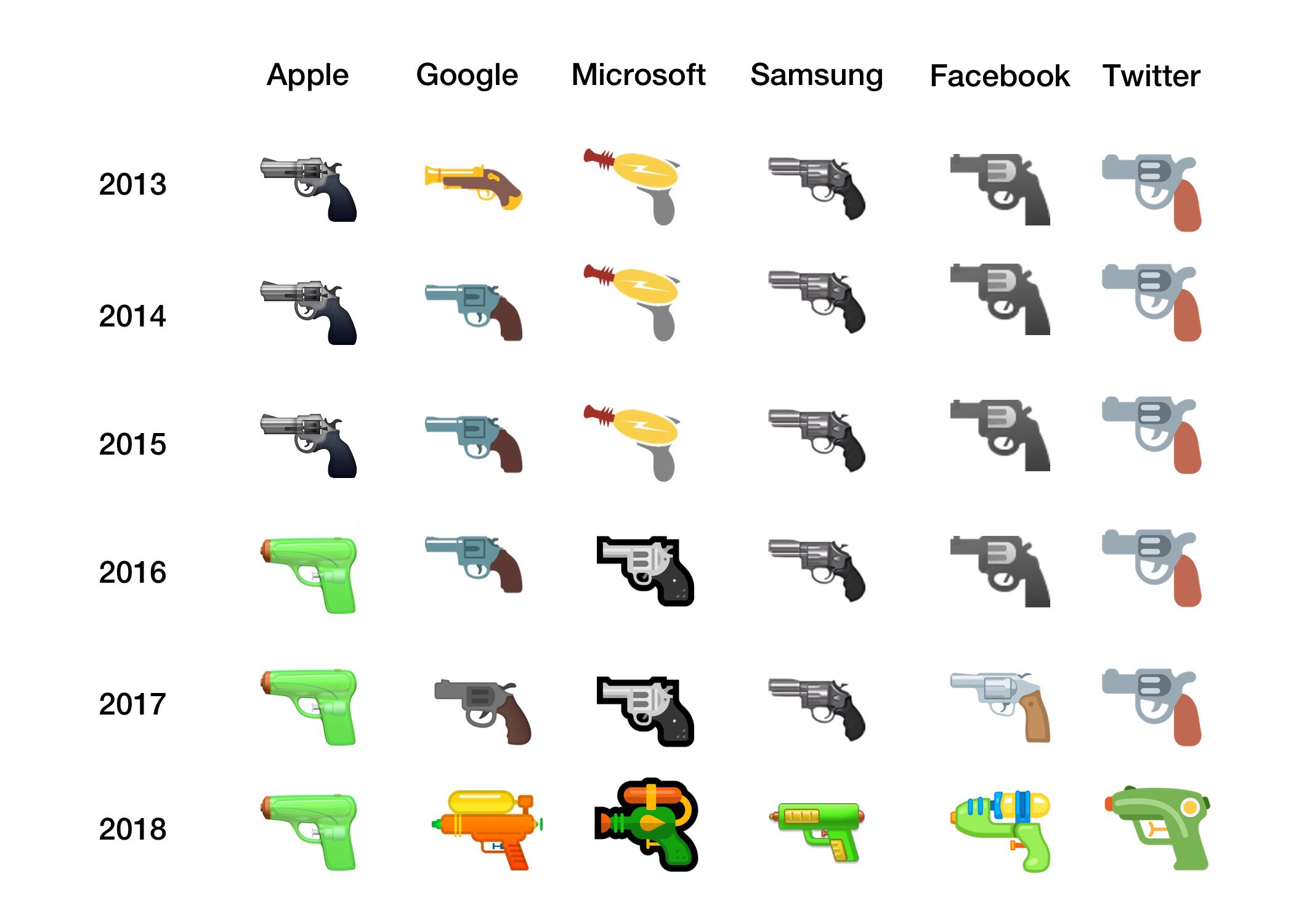 While the 🔫 Pistol is one of the biggest gestures toward emoji design convergence we have seen in 2018, it is by no means this update's only instance of attempted synchronization.

A total of 55 previously released Microsoft emoji designs have today been modified, as well as a further five changes to emojis not presently Recommended for General Interchange (RGI). Many of the design tweaks were evidently made to better align Window's emoji suite with the converging design choices made by other major vendors.

As of this update, Windows continues to lack support for the various national and subdivision flag emojis, and instead shows the various characters within these sequences (eg the letters US for the 🇺🇸 United States flag. 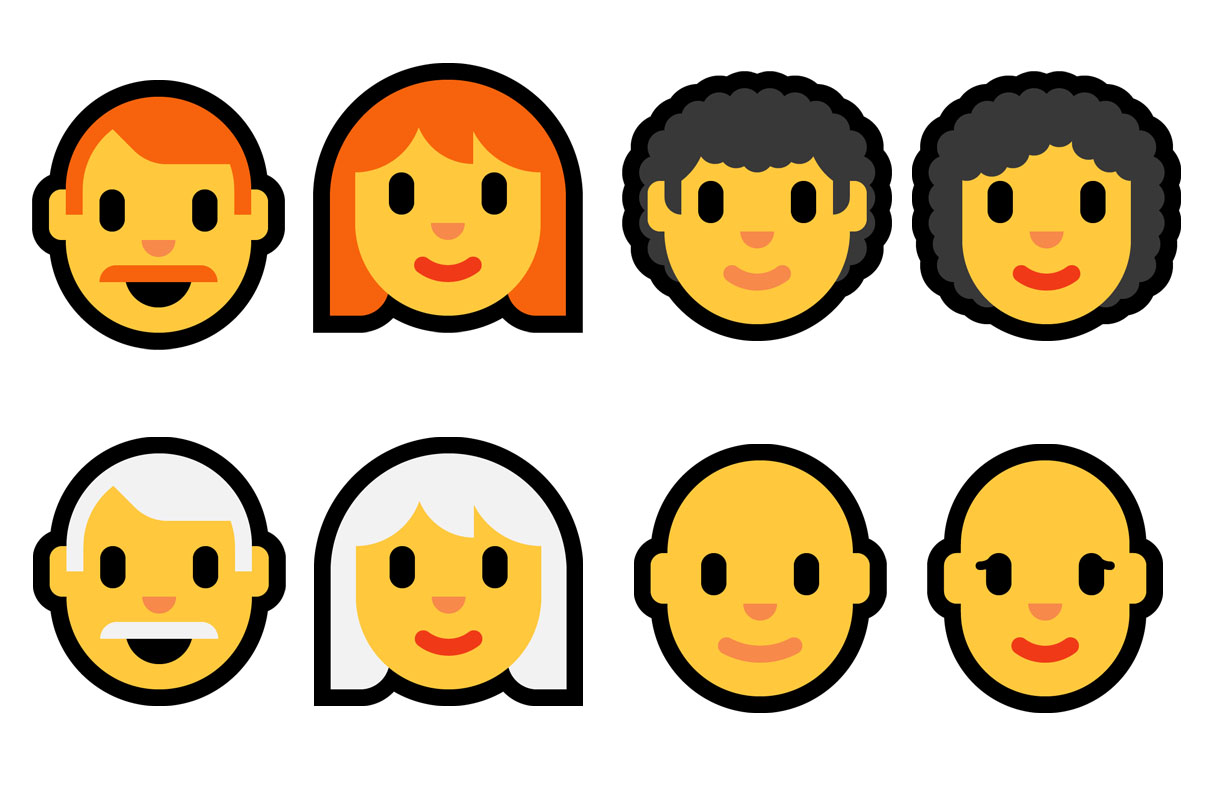 Akin to Google (unlike Twemoji), Microsoft opted to provide the four new "emoji component" code points used to create these hair style emojis with stand-alone designs, as shown below. 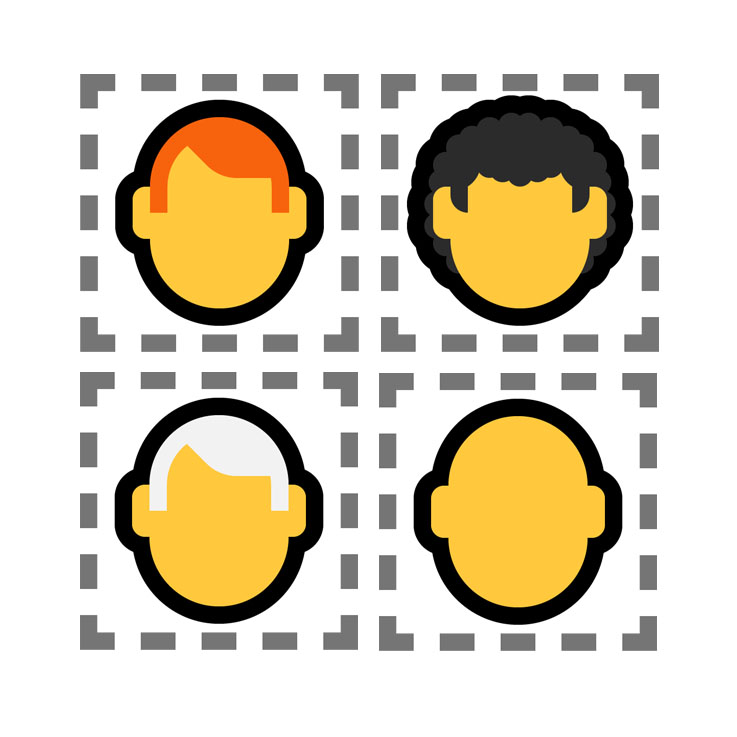 These aren't shown on the emoji keyboard and aren't intended for separate display, but may show in circumstances such as apps that don't correctly display ZWJ Sequences. 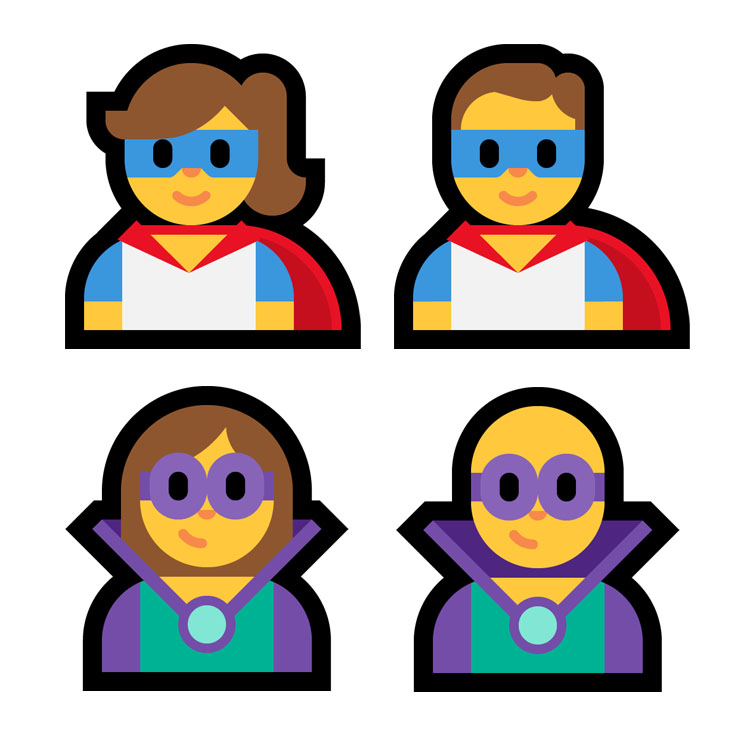 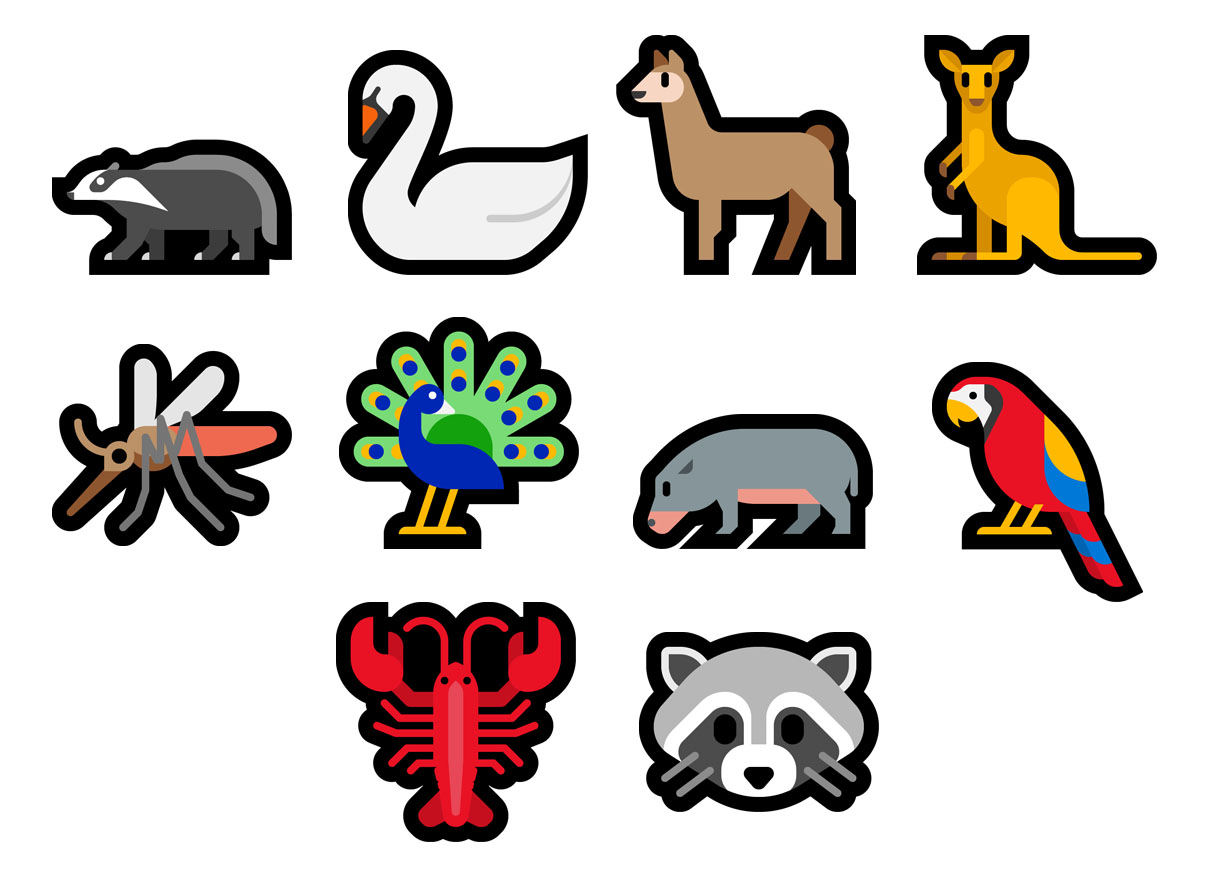 Above: The ten new animal emojis from Emoji 11.0, including 🦘 Kangaroo and 🦞 Lobster

There are six new food and drink emojis included in this release in total. 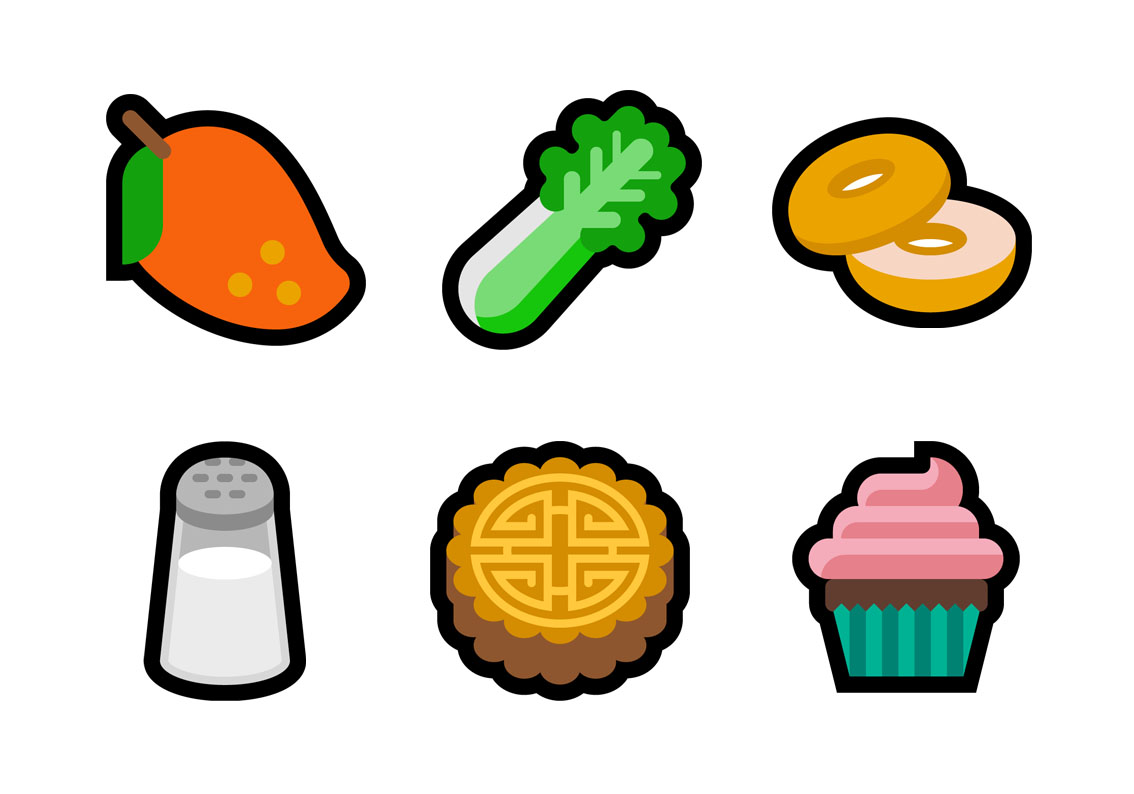 Above: The six new foodstuff emojis from Emoji 11.0, including 🥭 Mango and 🧁 Cupcake

Emoji 11.0's other features include body parts such as 🦵 Leg and 🦶 Foot, a series of scientific objects such as 🥼 Lab Coat, some new activity-based objects like the 🛹 Skateboard (notably shown from the underside) and 🥍 Lacrosse, as well as other new objects from 🧻 Roll of Toilet Paper to 🧨 Firecracker. A selection of these new emoji is shown below. 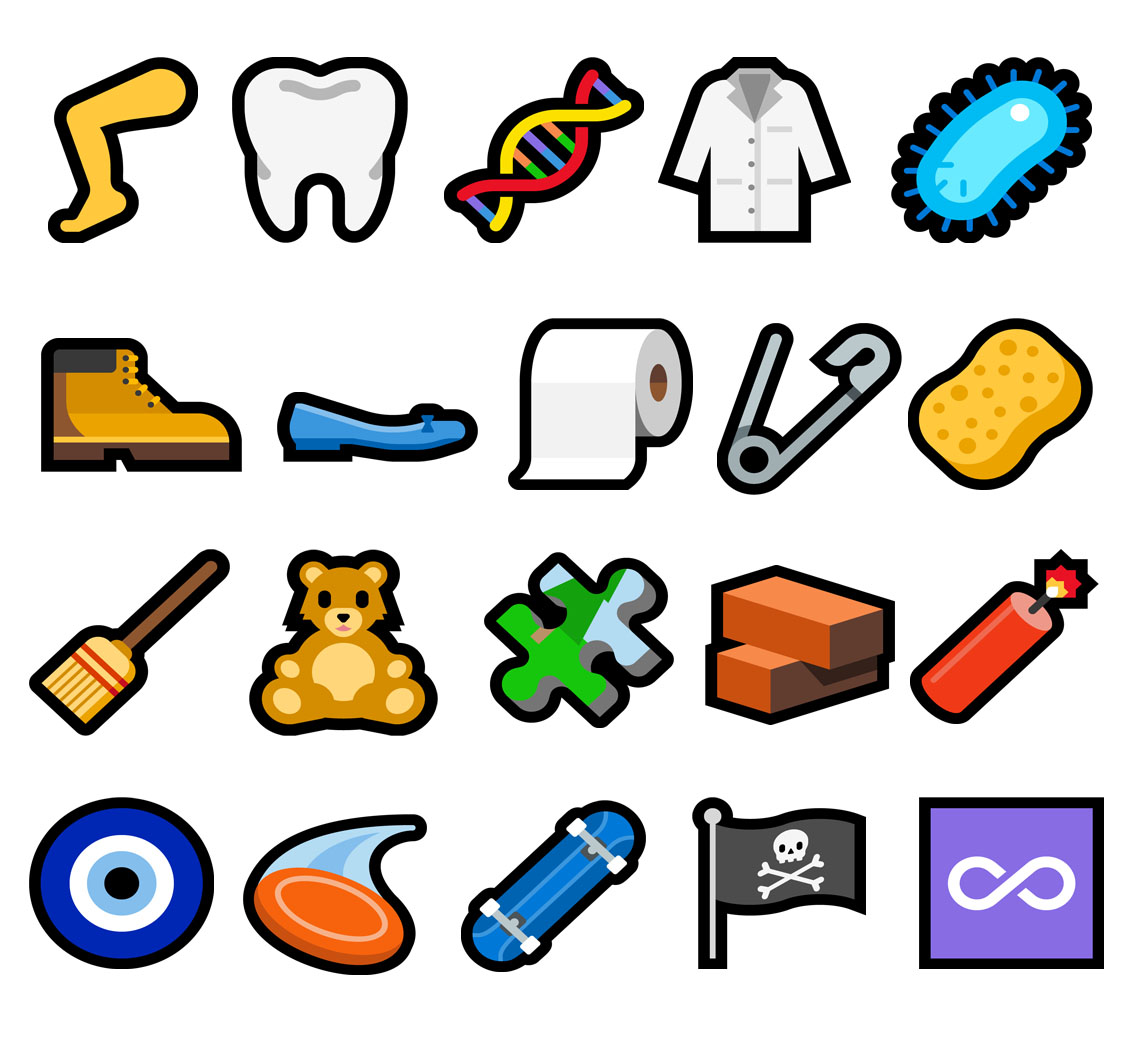 Above: A selection of Microsoft's Emoji 11.0 designs. All of the vendor's new emoji designs can be viewed here.

Design convergence with other vendors is a clear priority for Microsoft, with many changes either correcting past mistakes, tweaking designs, or often moving a design closer to how it might be displayed on other platforms.

🚯 No Littering now correctly bans littering, rather than banning putting litter in a trash can. 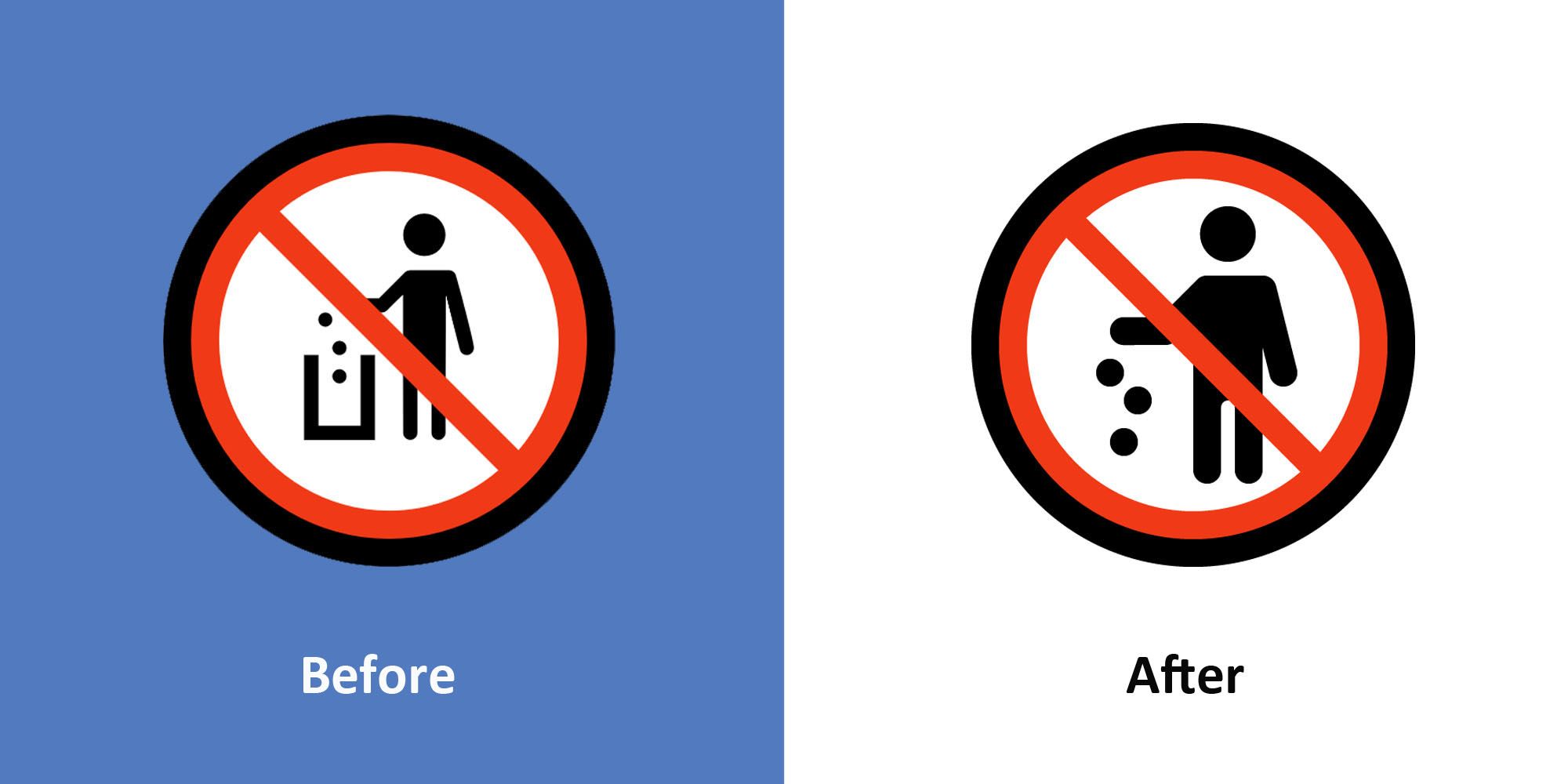 🕊️ Dove now now features an olive branch in its beak, as well as changing its directionality to be left-facing.[2]. 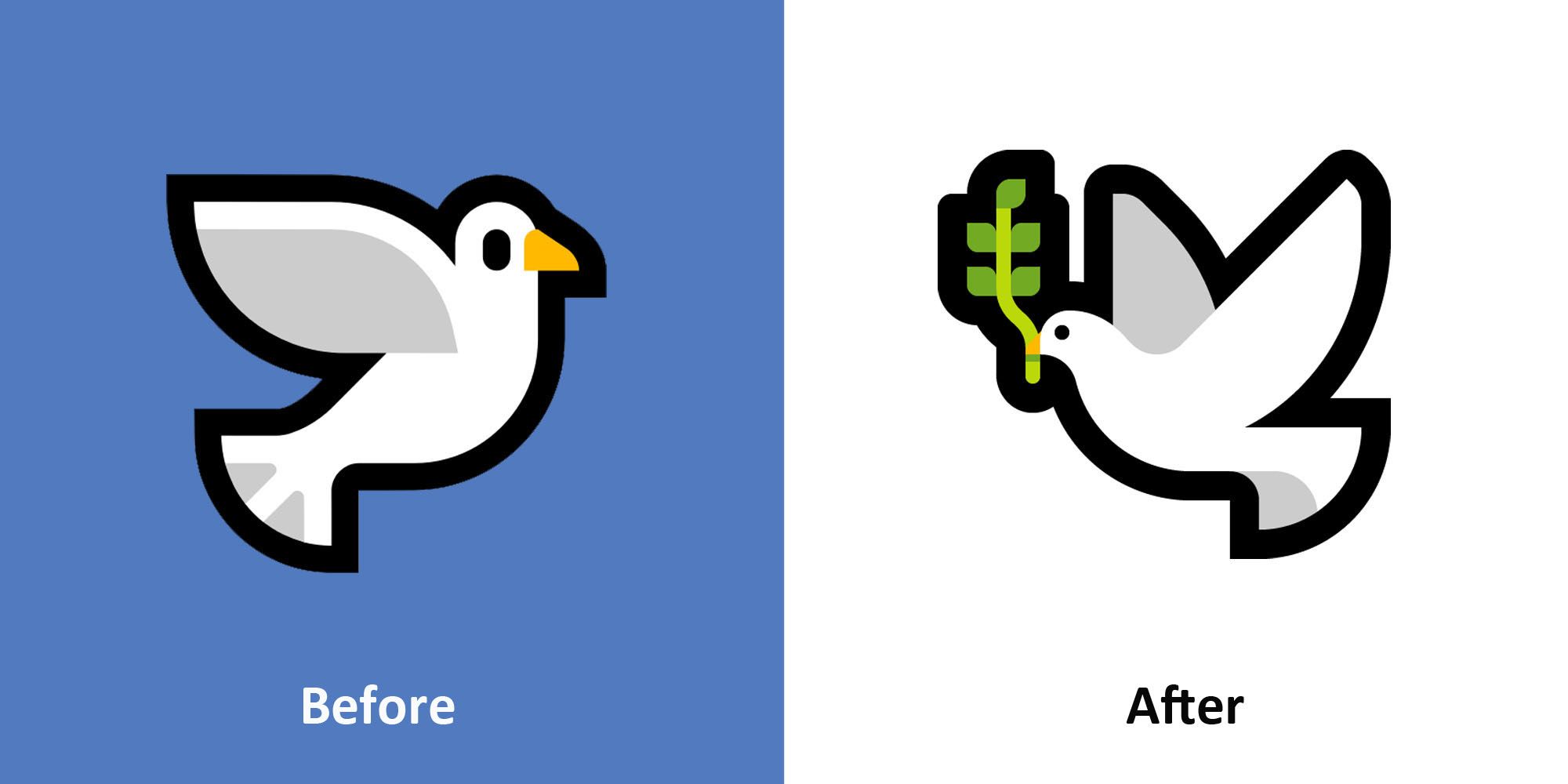 🖥️ Desktop Computer now displays as a stand-alone widescreen monitor, as is the norm across vendors. 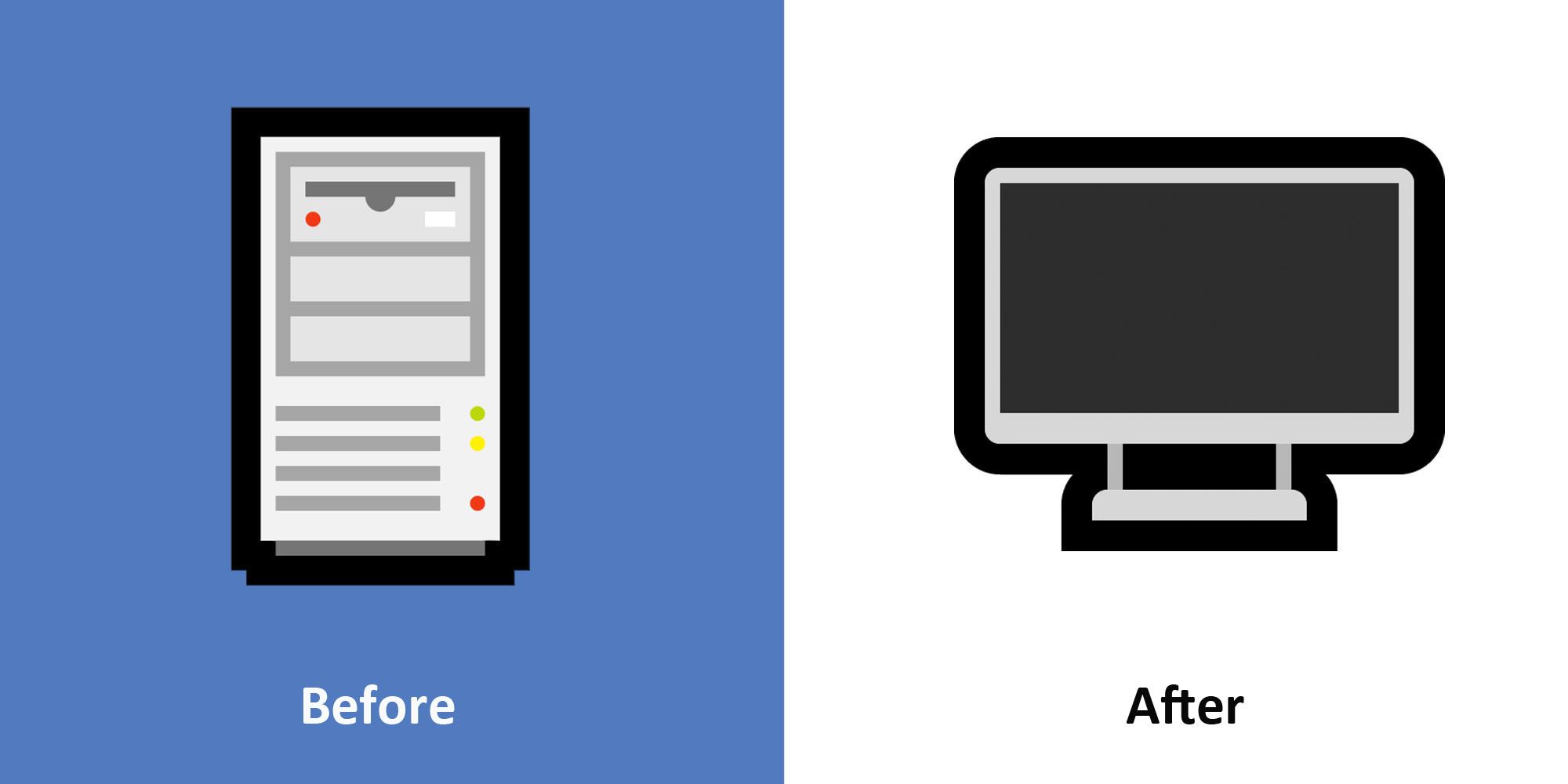 💻 Laptop Computer now faces forward displaying its keyboard in-keeping the the standard seen across other vendors and the 🖱️ Computer Mouse has had its color scheme simplified.

The 🐍 Snake now features a coiled body and a leftward-facing head, as is the norm. 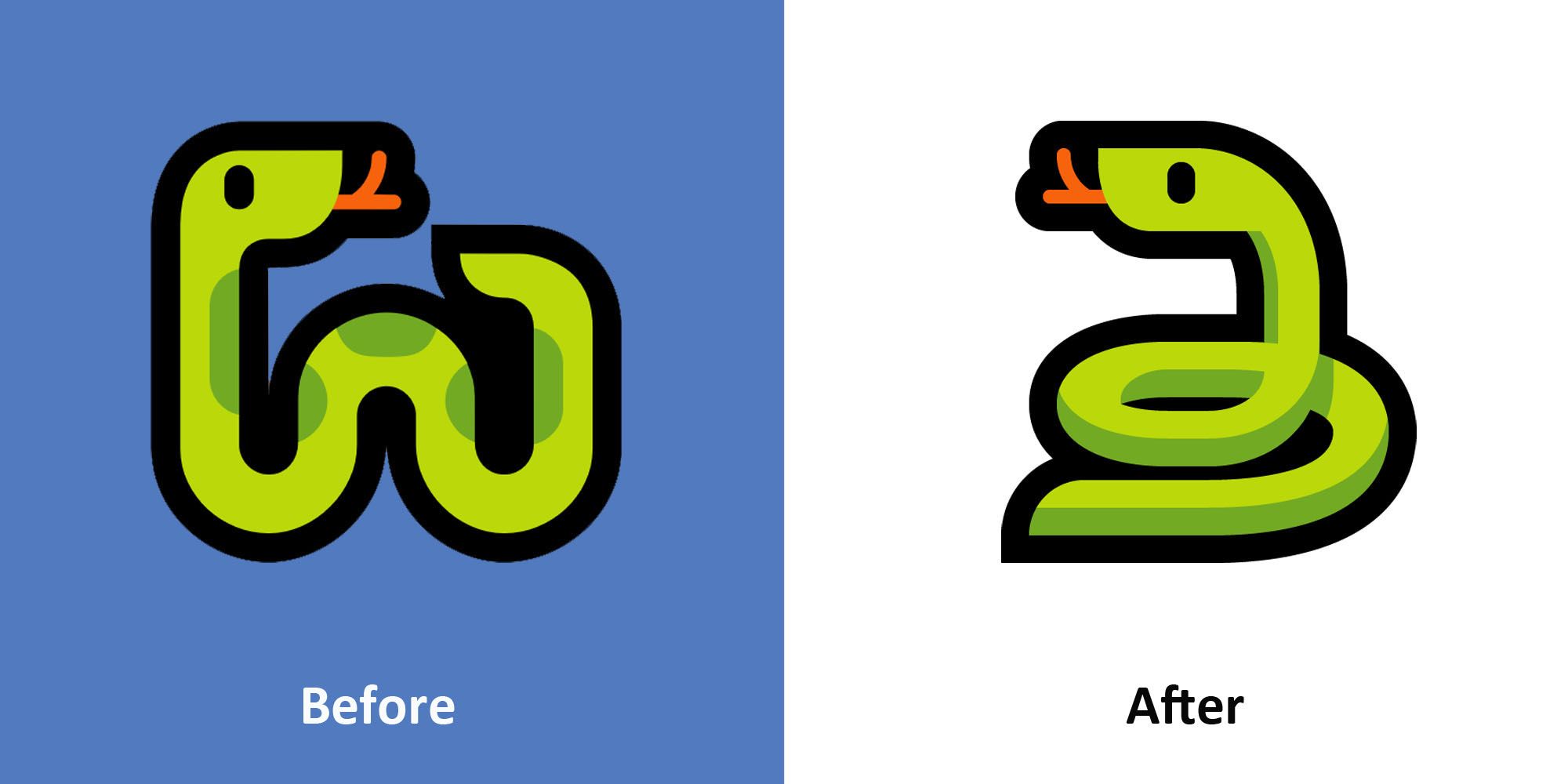 The 🥙 Stuffed Flatbread now features its ingredients emerging from the side of a round pitta as opposed to at the top end of an elongated wrap. 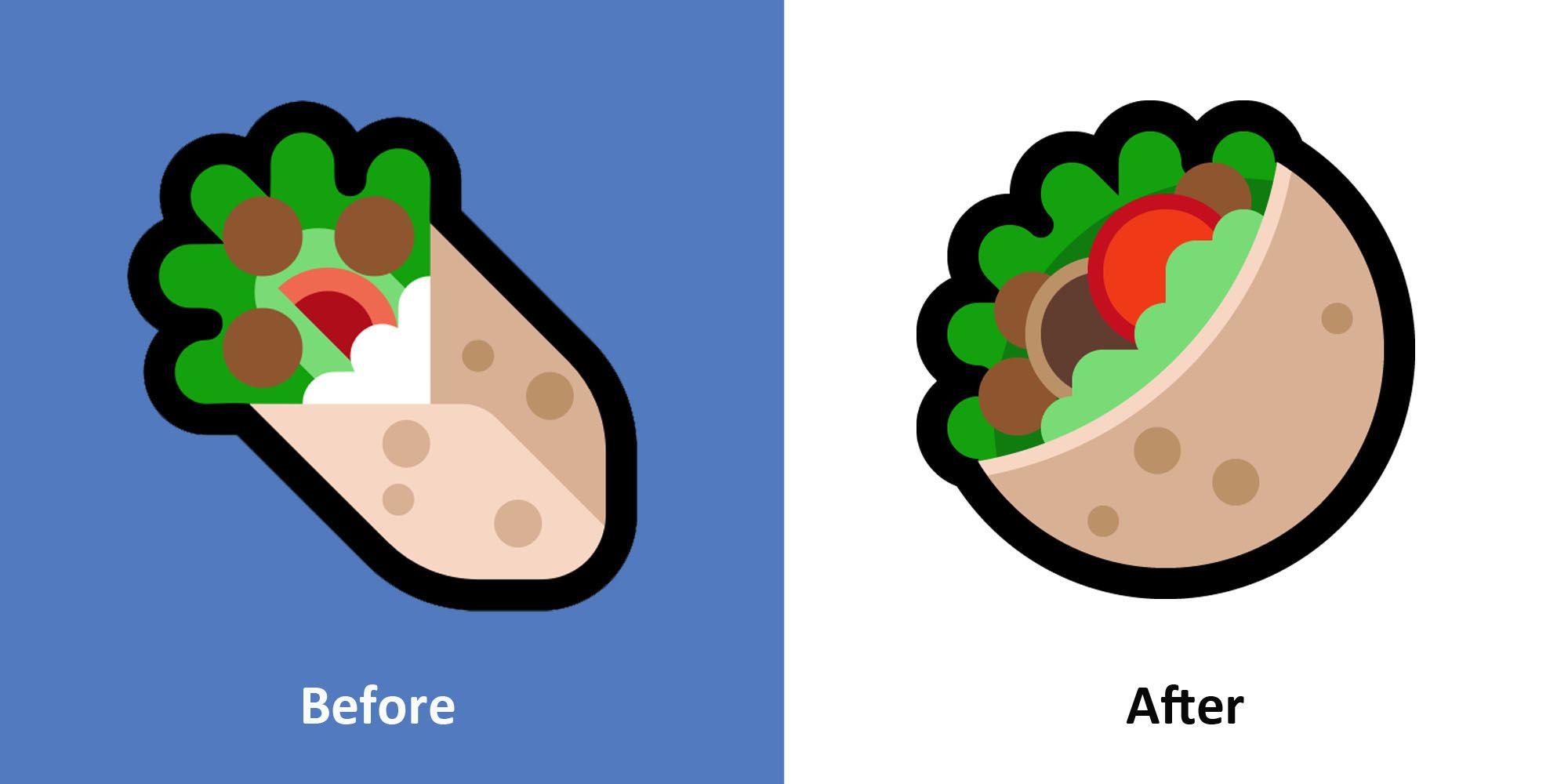 Emojis dispalying a bright beaming sun in isolation of terrain[3], such as 🌞 Sun With Face and 🌦️ Sun Behind Rain Cloud, have an increased number of radiant beams emitting from their circular centers. 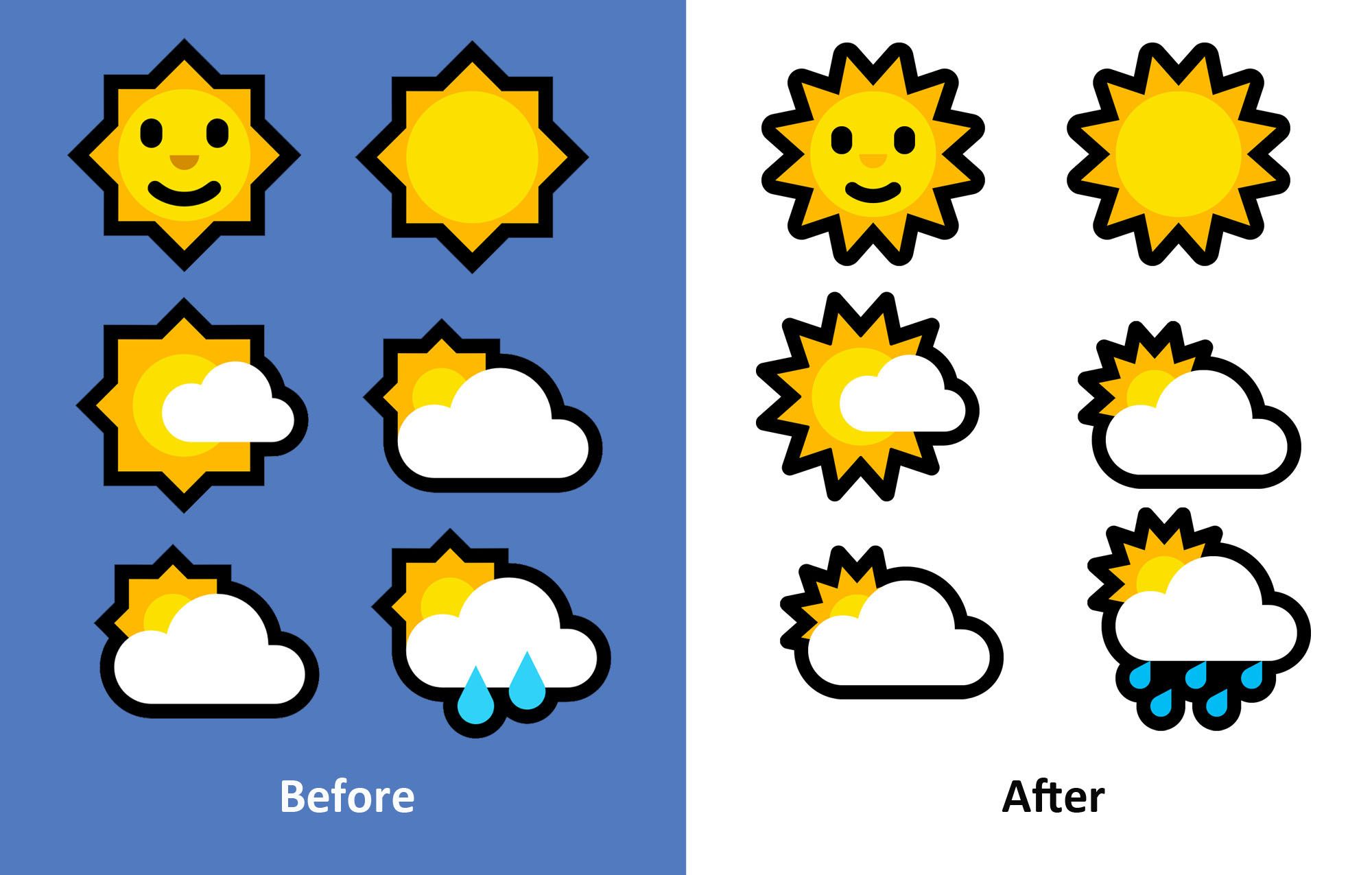 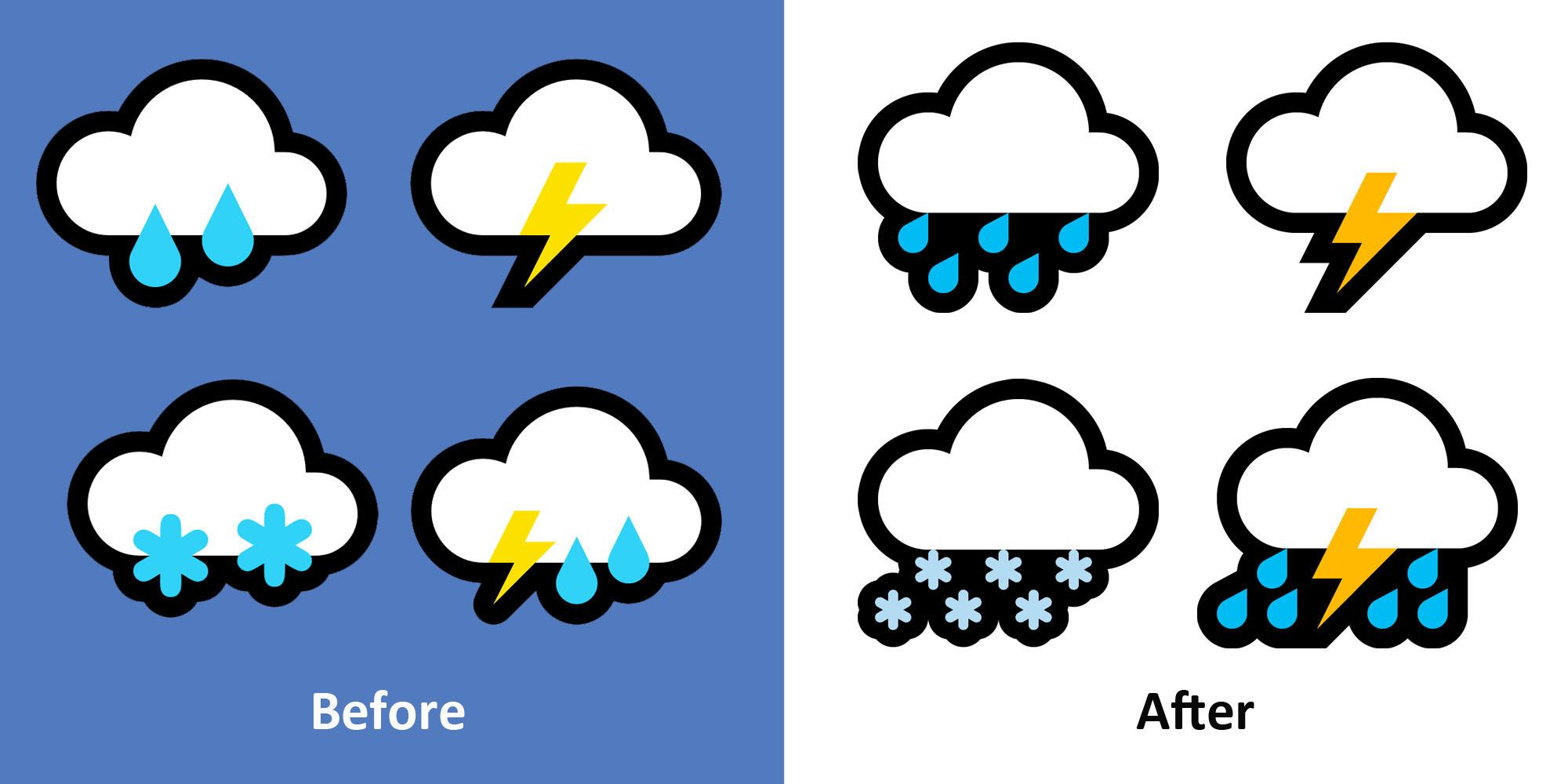 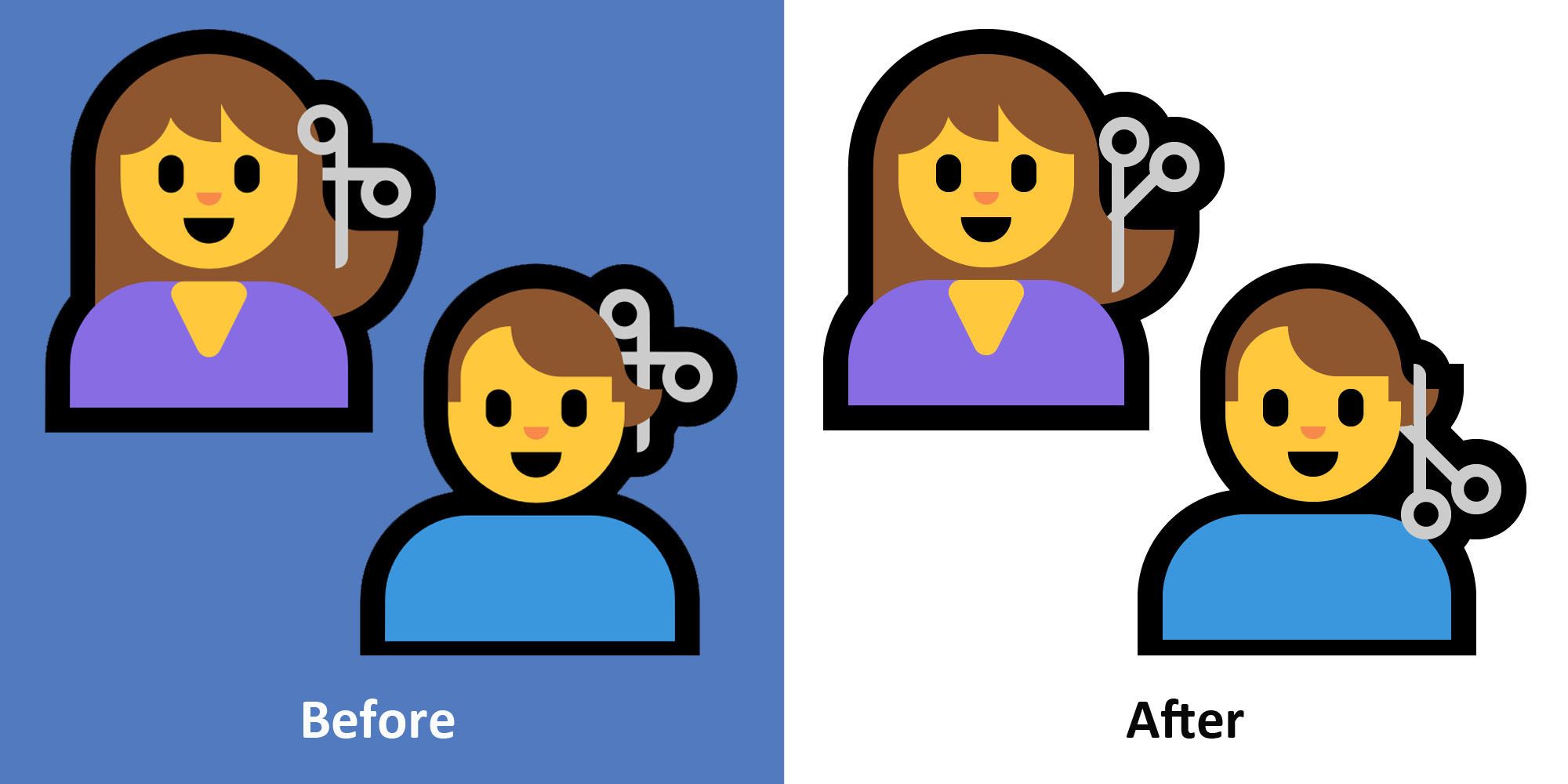 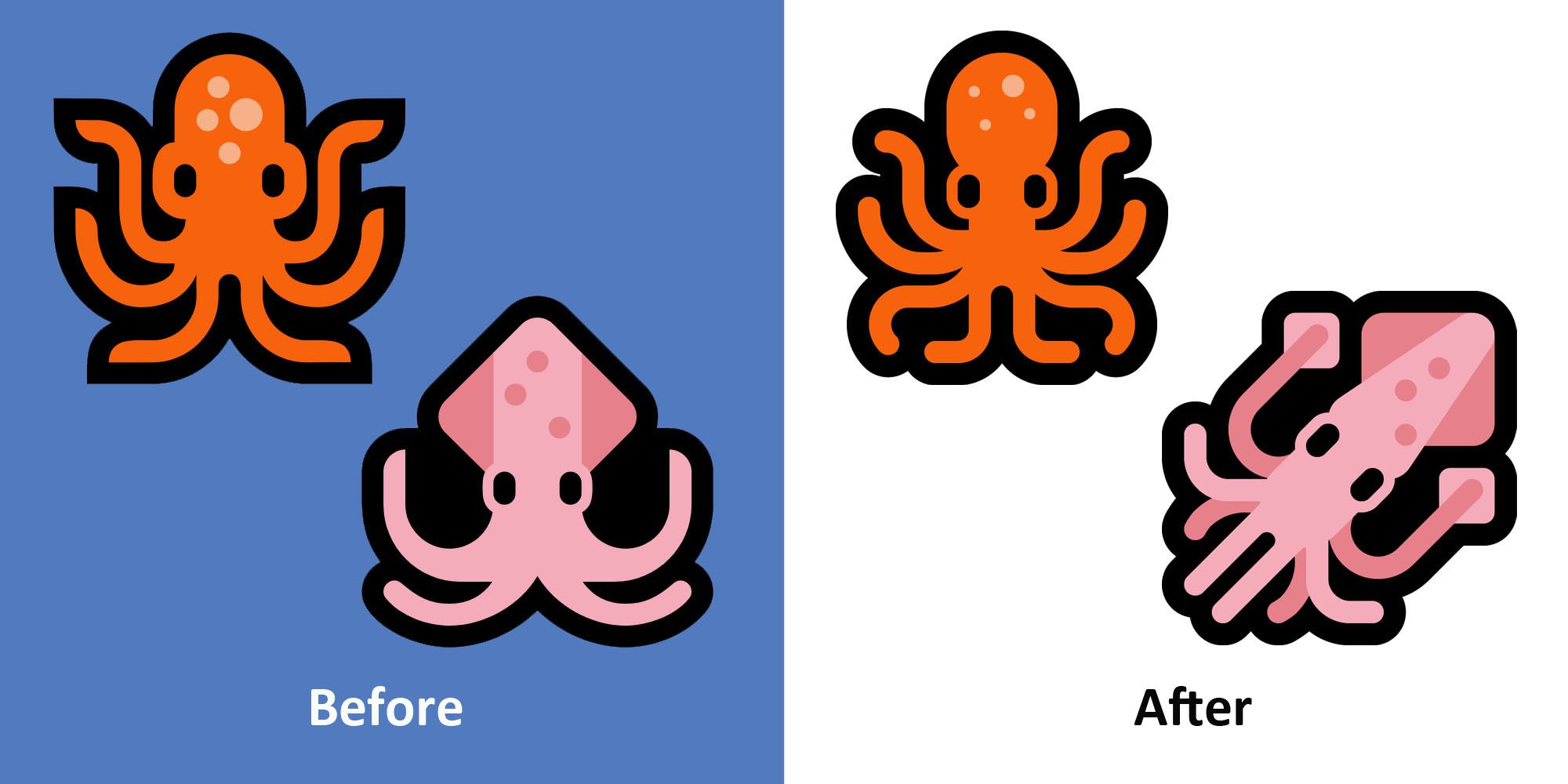 🐞 Lady Beetle and 🦂 Scorpion are also now more anatomically accurate thanks to changes in their antenna and leg structures respectively. However, unlike 🐙 Octopus and 🦑 Squid, this anatomic accuracy is congruent with other vendors' depictions.

The remaining emojis changed in this update but not not highlighted or discussed here are as follows:

Windows features a series of non-RGI ZWJ sequences based around the 🐱 Cat Face emoji. These unsanctioned ZWJ sequences all featured the character 🐱‍👤 Ninja Cat and exclusively display as single characters on Windows devices.

The non-RGI 🐱‍👤 Ninja Cat on Windows devices has had its nose and ears changed. 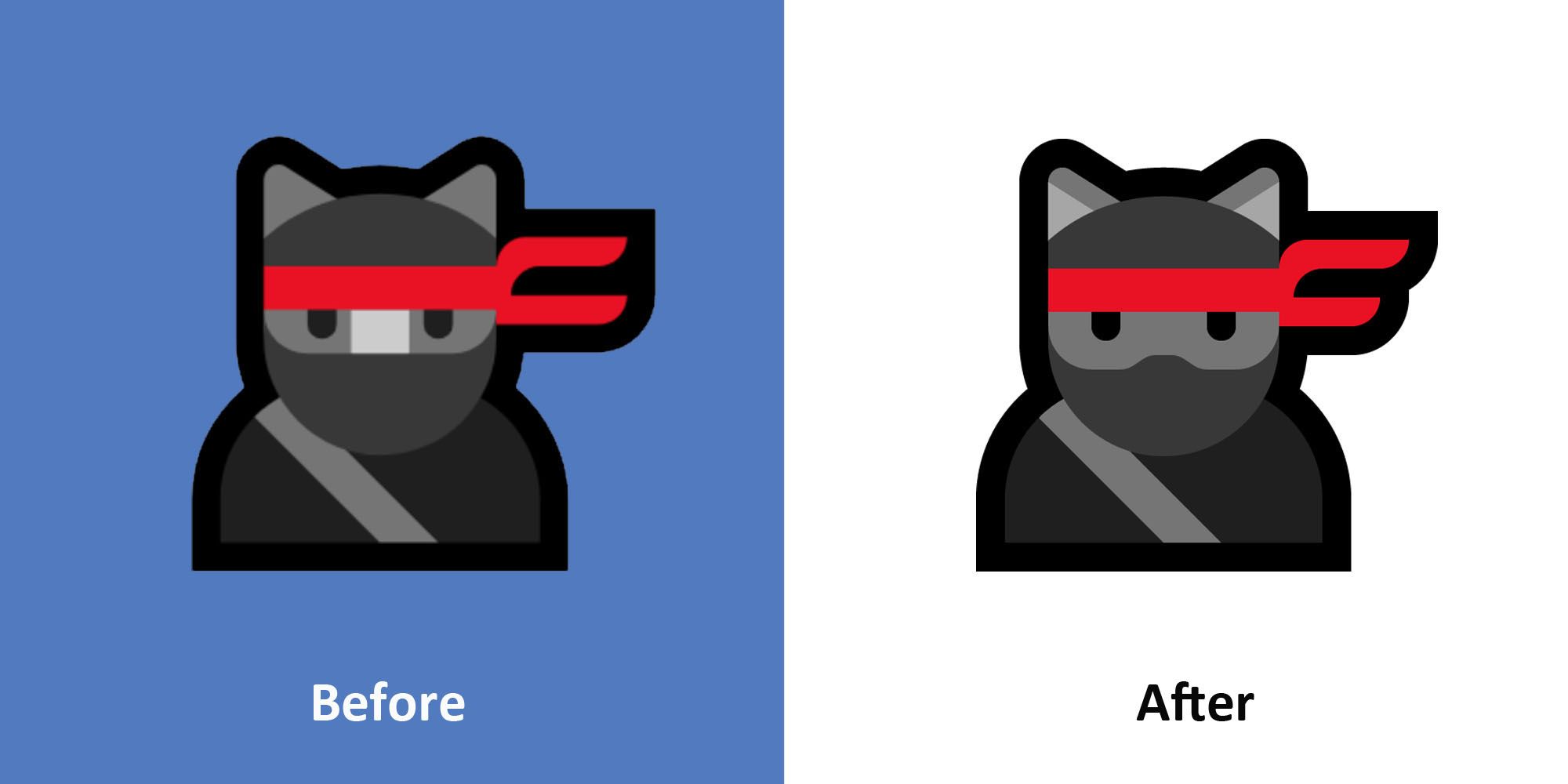 There are an additional five ZWJs which display 🐱‍👤 Ninja Cat performing various activities, four of which received design modifications in this update. 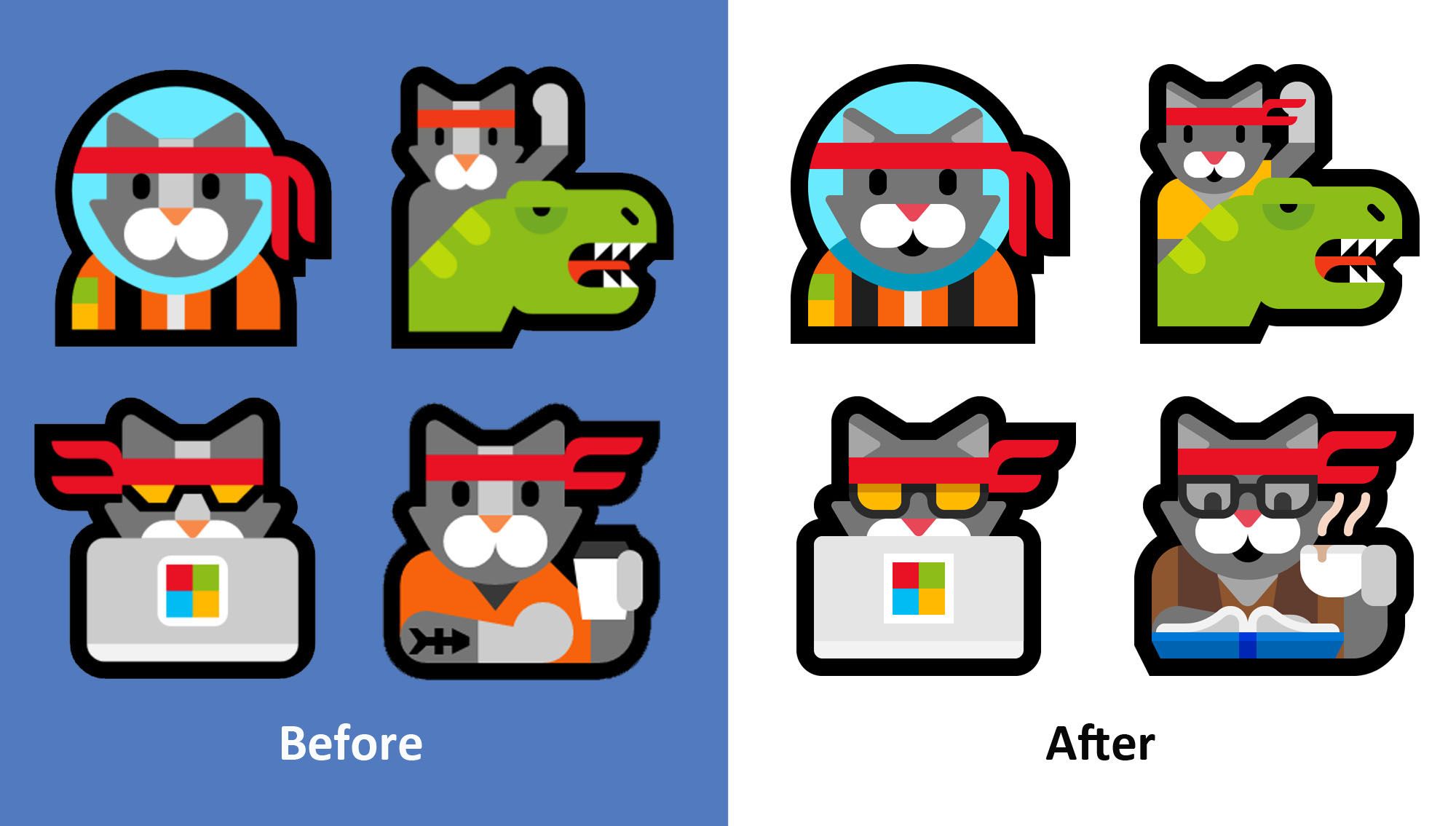 These emoji updates are coming to all Windows 10 users starting October 2, and rolling out in a staggered release.

Those using Windows Insider builds would have already received these updates at various stages over the past few months, varying based on the fast or slow ring options.