It's a small but persistent emoji query: one that finds new life whenever there's a new development in the "stonks" discourse: why is the upward line on 📈 Chart Increasing displayed in the seemingly-counterintuitive color red?

The answer to this question is actually quite simple, but is an excellent example of cross-cultural variation in color semantics and its impact on emoji design.

In Japan, the country where the first emoji sets originated, red is traditionally used to represent increases in the value of a stock.

Meanwhile, green is used to represent decreases in stock value. 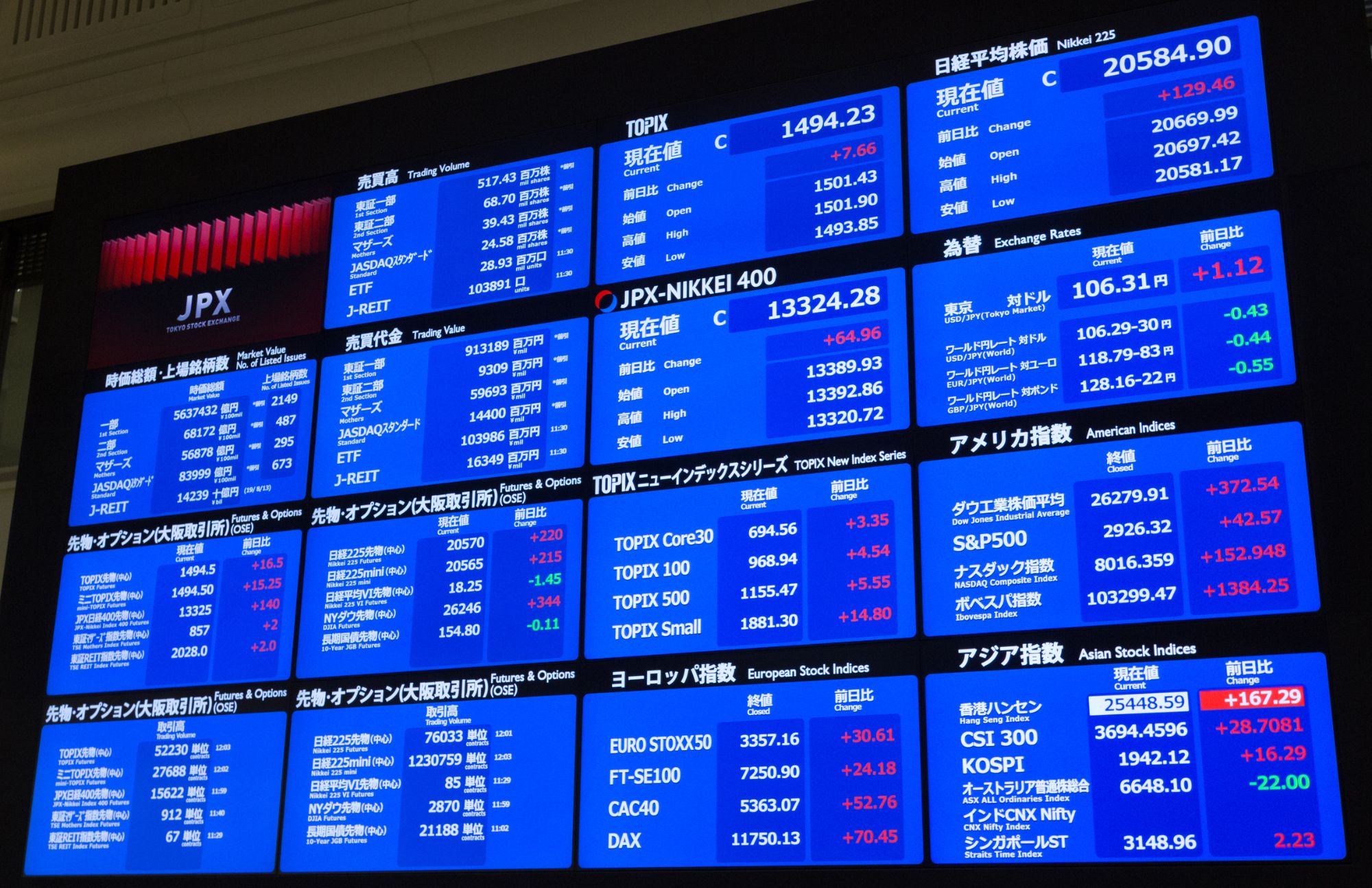 ok we don't understand stonks but we do get emojis:

Why is the 📈 Chart Increasing emoji shown in red and not 🟢 green?

This emoji originates in Japan, and is shown in red there, because that's the color used on the Tokyo Stock Exchange for increases https://t.co/lETnOR2UHg pic.twitter.com/t2LMcBJlWJ

This is in contrast to how many western cultures use the color red in financial contexts, where it represents debts, losses, and bankruptcy.

Take for example the English language idiom "in the red".

Despite this being somewhat confusing for western audiences, the red upward line has persisted across many emoji vendor updates in the name of backwards compatibility and maintaining the reference to the design's cultural origins.

However, not all of the 📈 Chart Increasing's current designs appear with a red line.

At the time of writing, 📈 Chart Increasing's line is shown in red across seven active emoji sets[1], compared to three displaying the line in green. 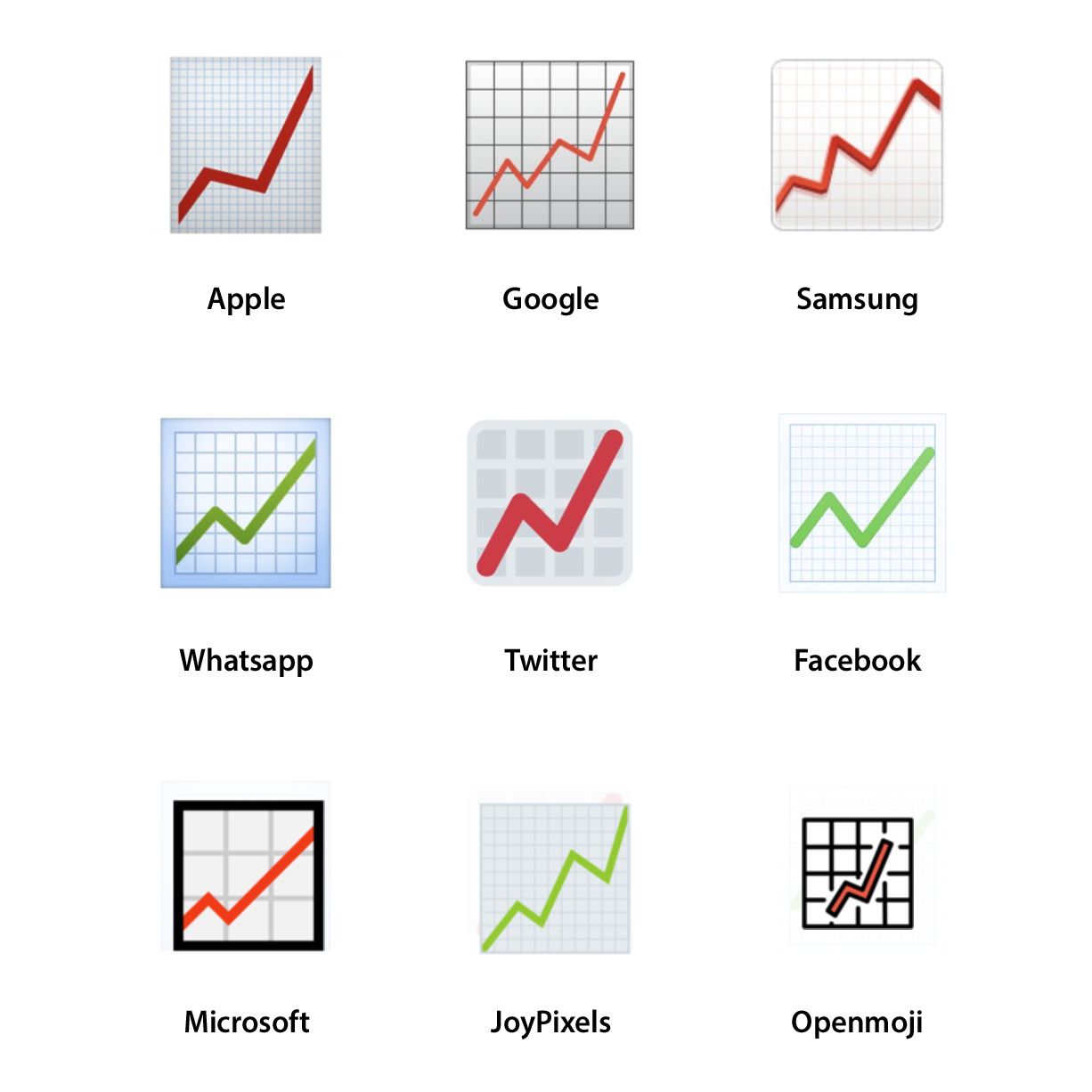 Above: a comparison of the 📈 Chart Increasing emoji across nine different active emoji vendors.

Significantly, 📈 Chart Increasing's line is red within the emoji set used within the default emoji keyboard of the majority of the world's mobile devices[2]: Samsung, Apple, and Google[3].

Apple was the first western platform to introduce the 📈 Chart Increasing emoji, with iPhones debuting the original design in 2012's iOS 5.1. 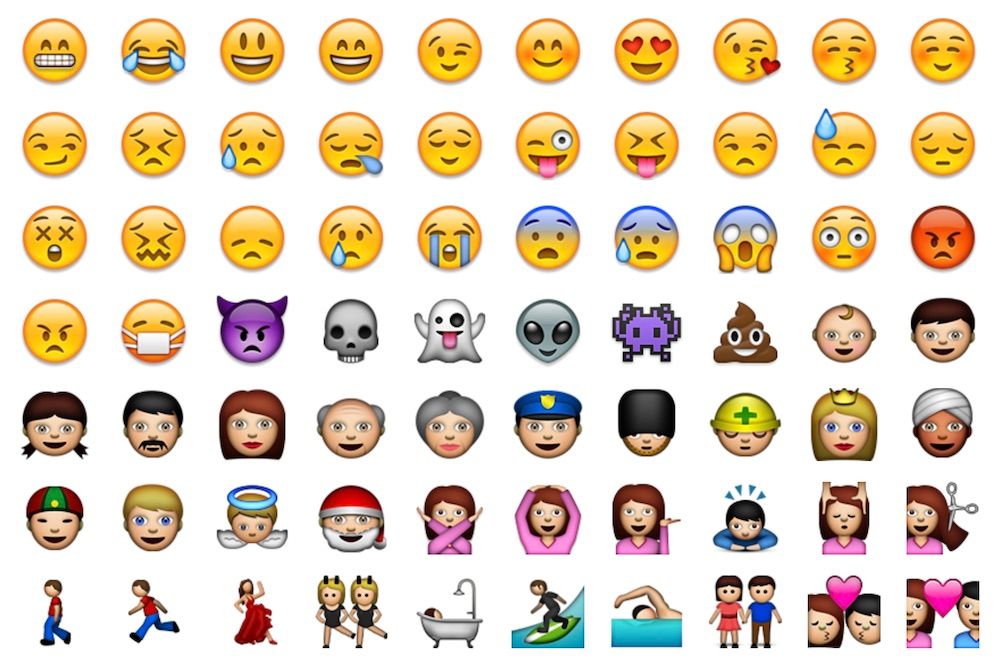 Above: a selection of Apple's original 2008 emoji set.

Above: the original proposal for the 📈 Chart Increasing emoji in Unicode's 'Emoji Symbols: Background Data' document from 2009.

📈 Chart Increasing was next introduced via Google's Android 4.3 and Microsoft's Windows 8.0 update. While neither of these designs displayed in color, both eventually choose to display the upward trending line in red in 2013 and 2018[5] respectively. 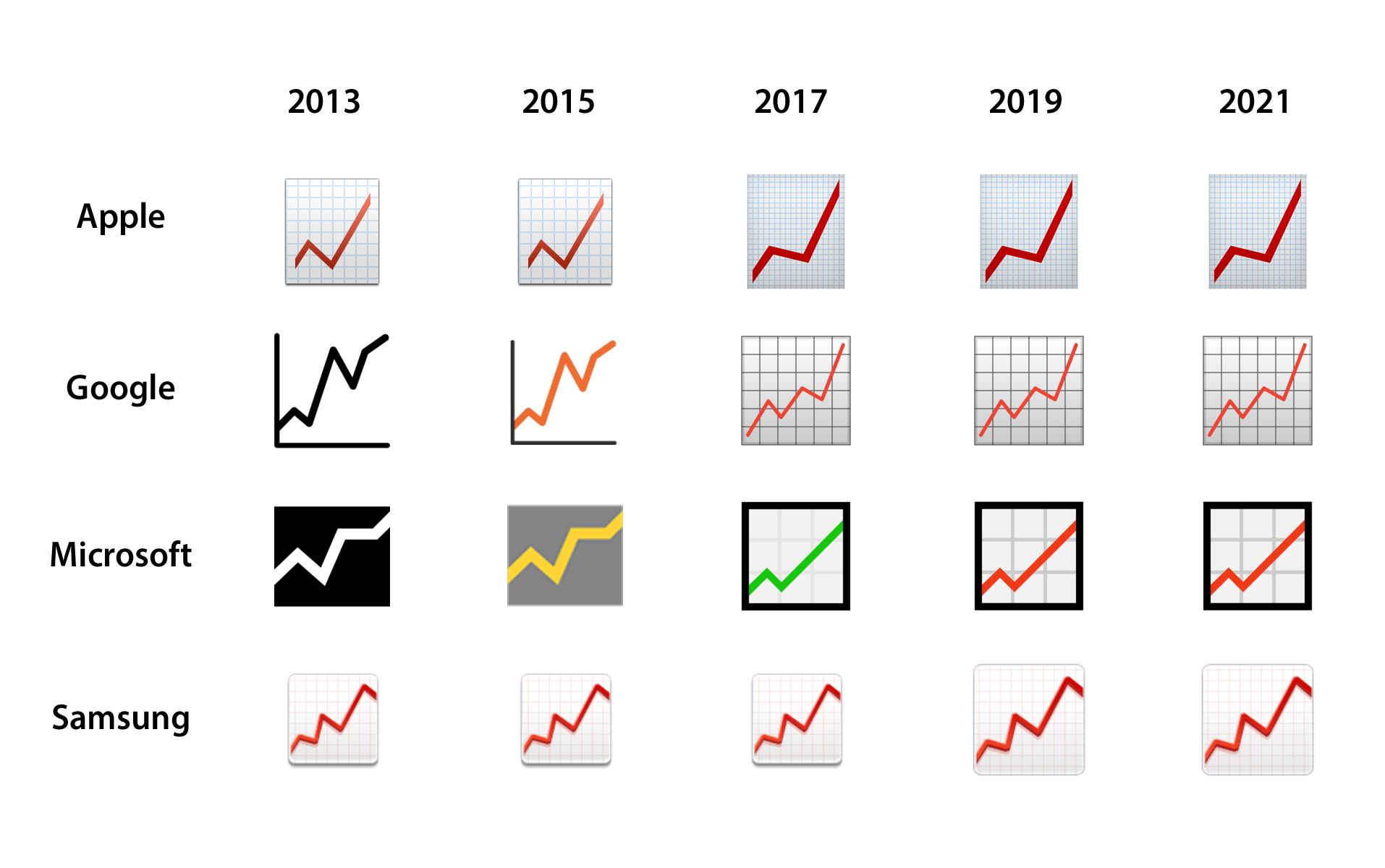 Above: comparison of the 📈 Chart Increasing emoji across Apple, Google, Microsoft and Samsung platforms.

So from 2013 onwards, Apple, Google and Samsung - the aforementioned default emoji designs on the majority of mobile devices - have left the upward trending line of 📈 Chart Increasing displaying in red.