The emoji keyboard has been a mainstay across our phones and tablets for over a decade, but today it can be easily accessed across a broad range of devices. One such platform is Sony's PlayStation 5 gaming console.

The PS5 features full emoji support via its own custom-designed emoji font.

Amongst them is a 🎮 Video Game that matches the design of the PS5 controller.

Above: a selection of the emoji designs available on PS5 consoles.[1]

PS5 owners are able to message their friends via the PlayStation Network's Game Base area. 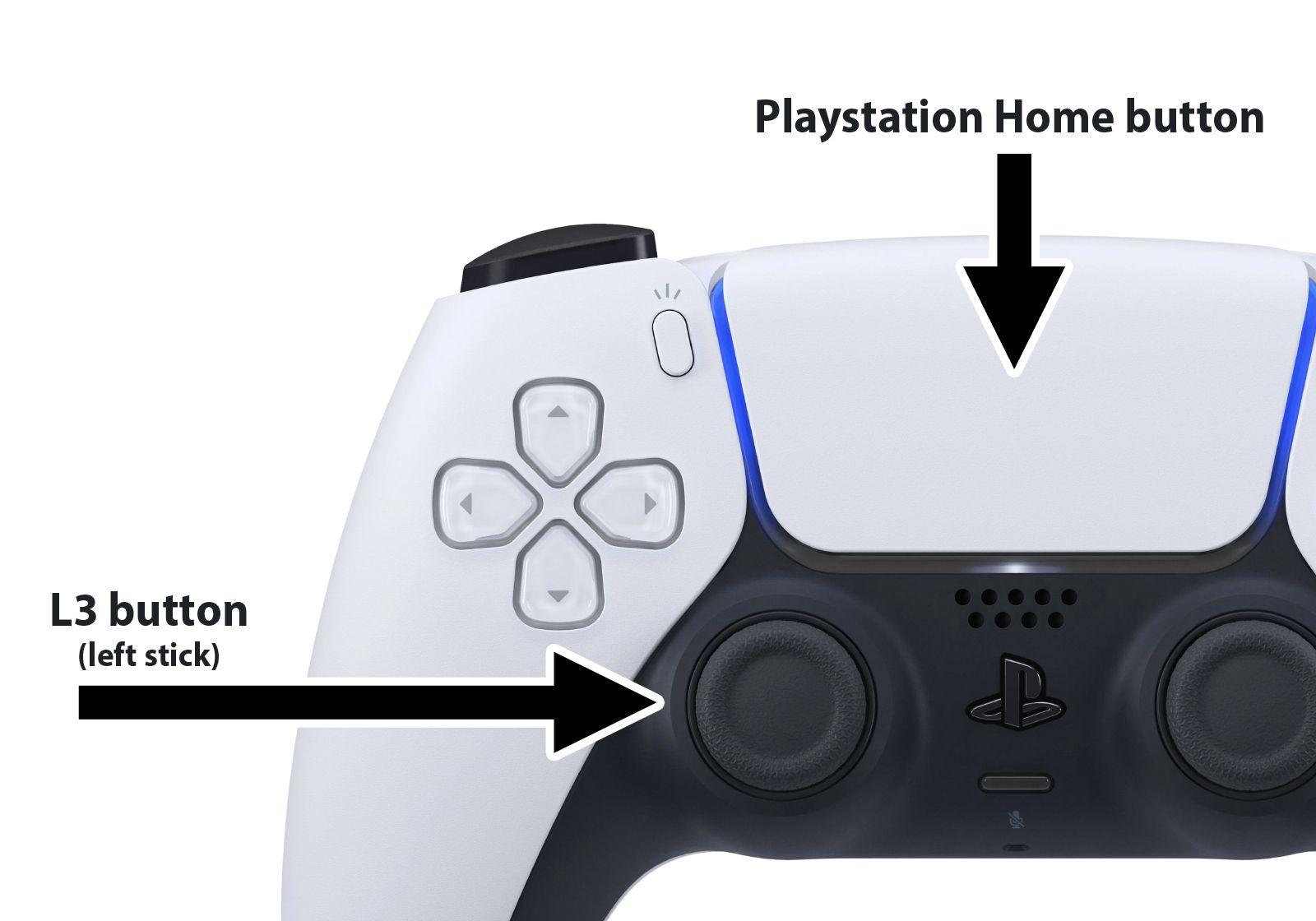 Above: the PS5 DualSense controller with the PlayStation Home button and the L3 left stick button highlighted.

The Game Base will display all other Playstation Network users that have been added as friends. Selecting a friend allows a user to type a text message to that user, and users can access the emoji keyboard simply by pressing in L3 button (left stick) when direct messaging another user. 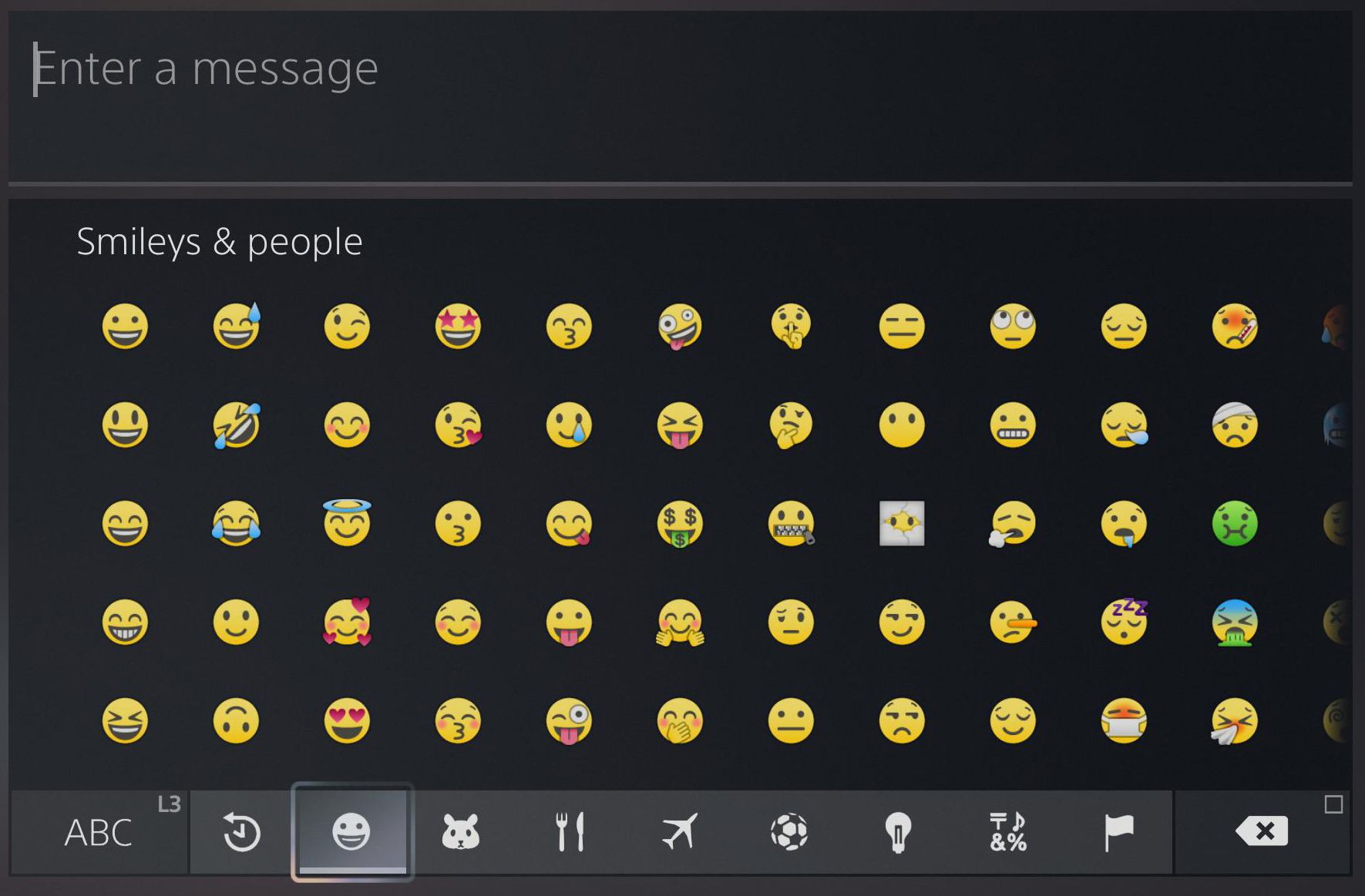 Above: the emoji keyboard as it appears on PS5 consoles.

The PS5 supports all 3,521 emojis currently approved by Unicode, including those from September 2020's Emoji 13.1. All of these emojis are displayed with custom Sony emoji designs, and this puts Sony among the most up to date emoji platforms.

This means the PS5 has better emoji support than many popular phones.

This custom emoji font distinguishes the Sony PS5 from the likes of the Nintendo Switch, which displays emojis using the the open source JoyPixels 2.0 emoji set. 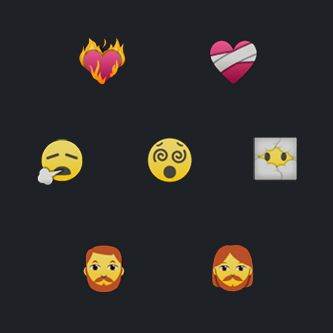 Playstation is one of the first platforms to support Emoji 13.1.

While PS5 users can send and receive emojis via the messaging platform, there is not presently any emoji support within either console’s internet browser.

Browsing the web results in any emoji showing a missing character box, otherwise known as a tofu, in Unicode parlance. 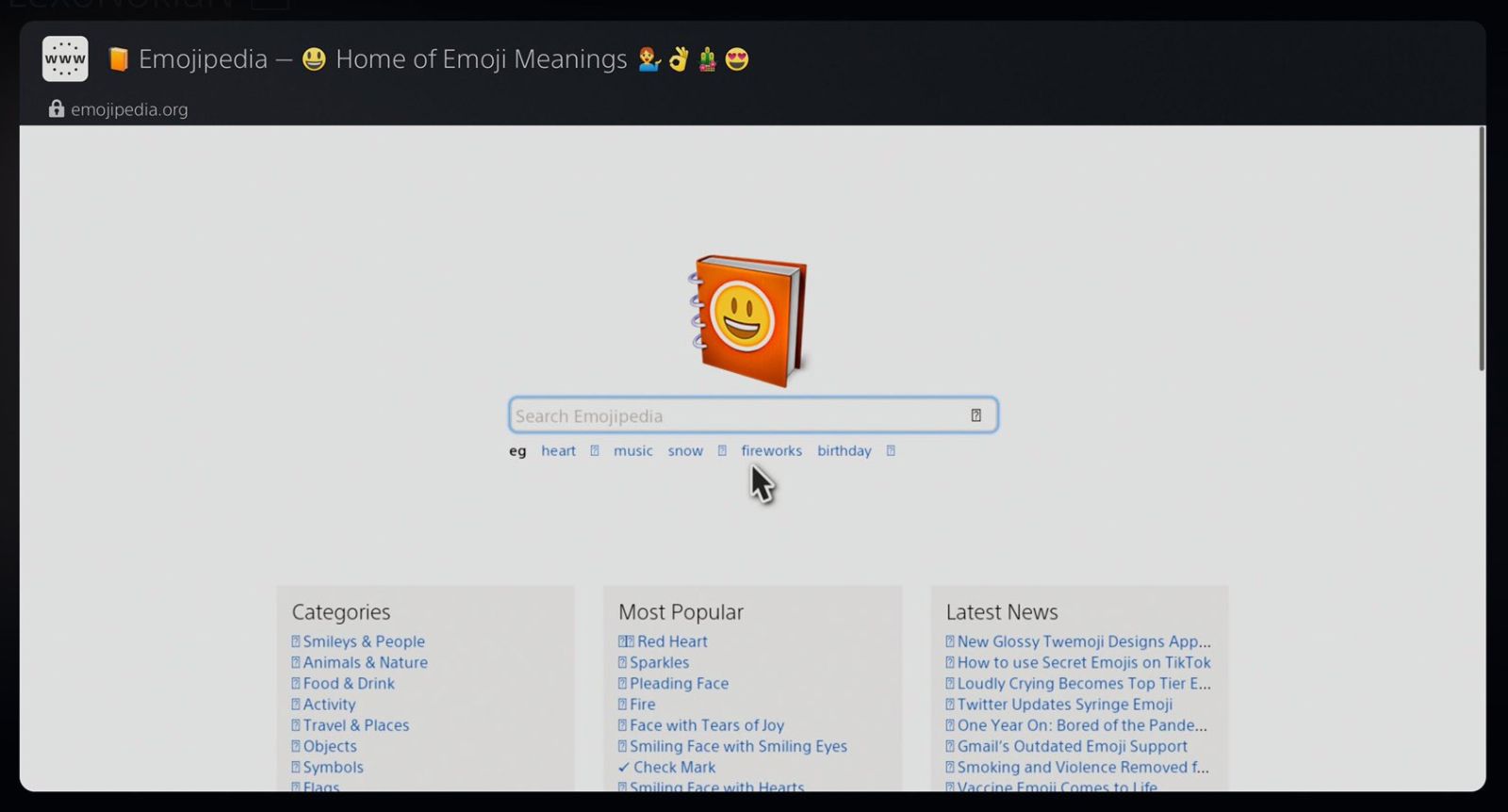 Above: Emojipedia home page as viewed on the PS5's internet browser, which lacks emoji support.[1:2]

Owners of the PlayStation 4 (PS4) console can message their friends via the Messages function. This includes messaging PS5 and PS Vita users[1:3]. Unlike the PS5, the PS4 does not provide any access to the emoji keyboard.

PS4 users can view emojis sent to them by others via either a Playstation 5 or another connected Sony messaging platform, but not send emojis of their own: there is no means through which a PS4 owner can directly insert an emoji into a message on the console itself.

Even without direct access to the emoji keyboard, the PS4 has the same level of emoji support as the PS5, displaying all emojis up to and including Emoji 13.1 in the same custom font as the PS5 when they have been sent to a users from another platform (PS5, Playstation App, Playstation website). 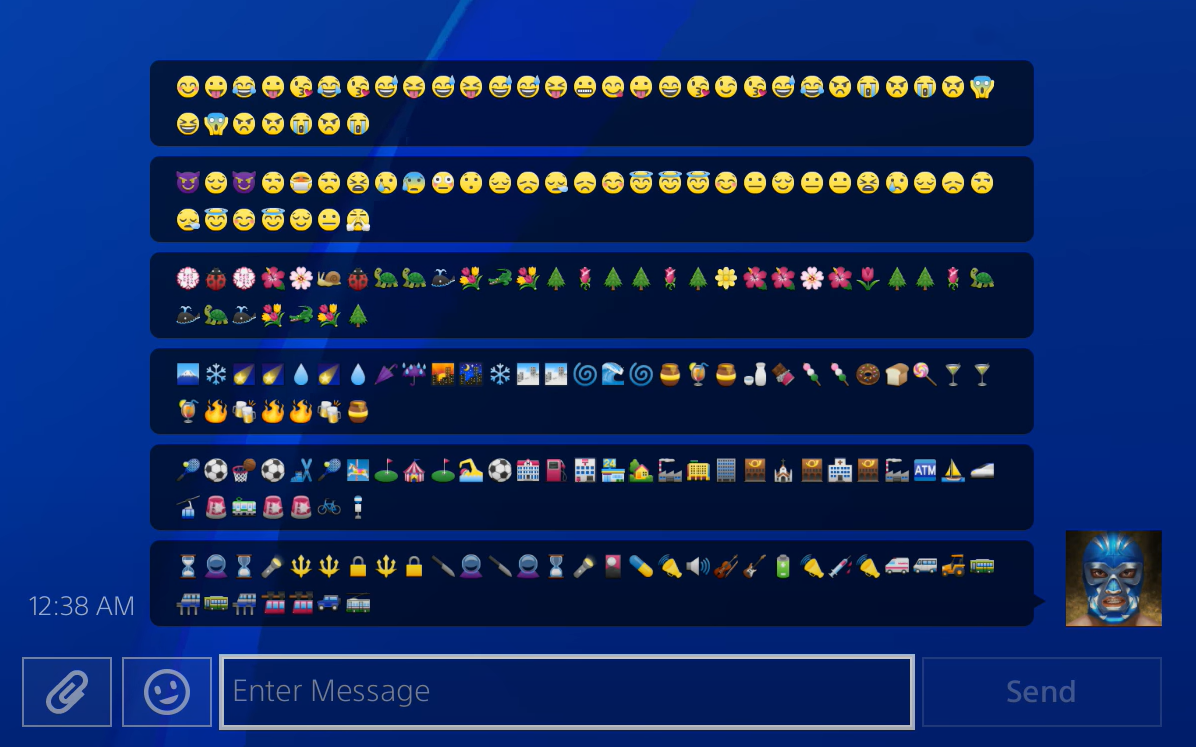 Above: emojis displayed within a PS4's Messages function.[2]

The Playstation 3 (PS3) also included emoji support in its Messages area, including access to a "symbol/emoticon" keyboard that included a selection of 274 emojis from Emoji 1.0. These emojis are presented in a custom font distinct from that seen on the PS5 and PS4.

A selection of these 274 emojis were animated - a feature not shared with their equivalent designs on the more recent consoles.

As of summer 2020, PS3 users cannot message users of the PS5, PS4, or PS Vita via their PS3 console. They can still message other PS3 users. 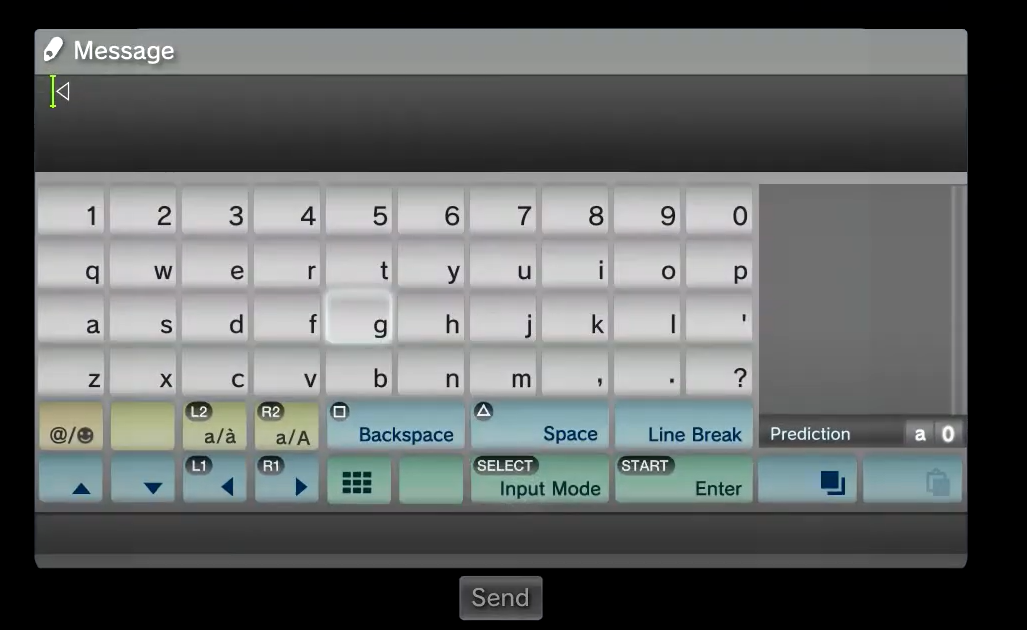 Above: the PS3's Messages keyboard, which includes an emoji keyboard icon in the bottom left.[3] 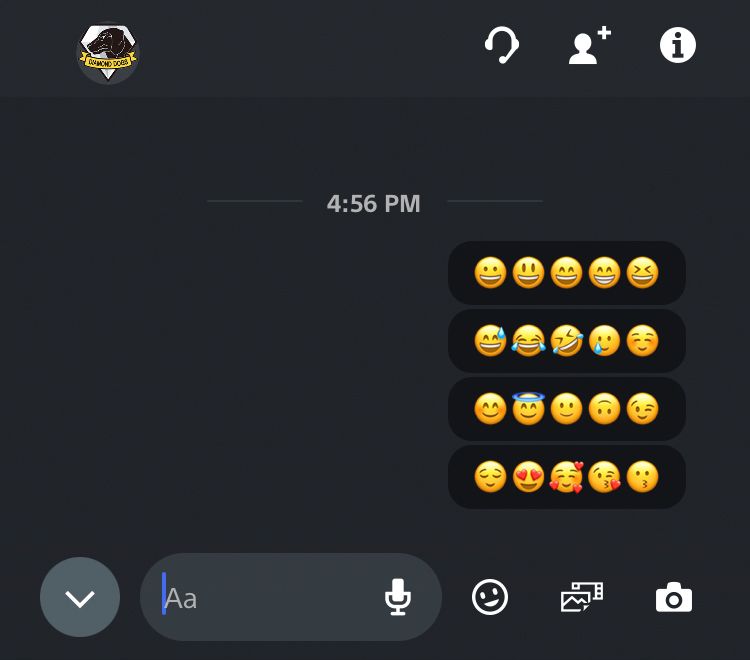 Above: Playstation Network messages as accessed via the Playstation App on an iPhone running iOS 14.5.

At the time of writing, Emojipedia doesn't display Sony emoji designs alongside those of other vendors, though we hope to add this in future.

Until that happens, keep an eye on our Sony Playstation emoji support page for the most up to date information.