Unicode 11.0 arrives on June 5, 2018. This signals the date which companies can begin supporting the new emojis.

The final emoji list for 2018 was announced back in February, and the underlying release required to make this possible is now here.[1]

Vendor such as Apple, Google, Microsoft or Samsung tends to have their own schedule for making new emojis available to the public, with most likely to support Unicode 11's new emojis by the end of 2018.

What are the new emojis? 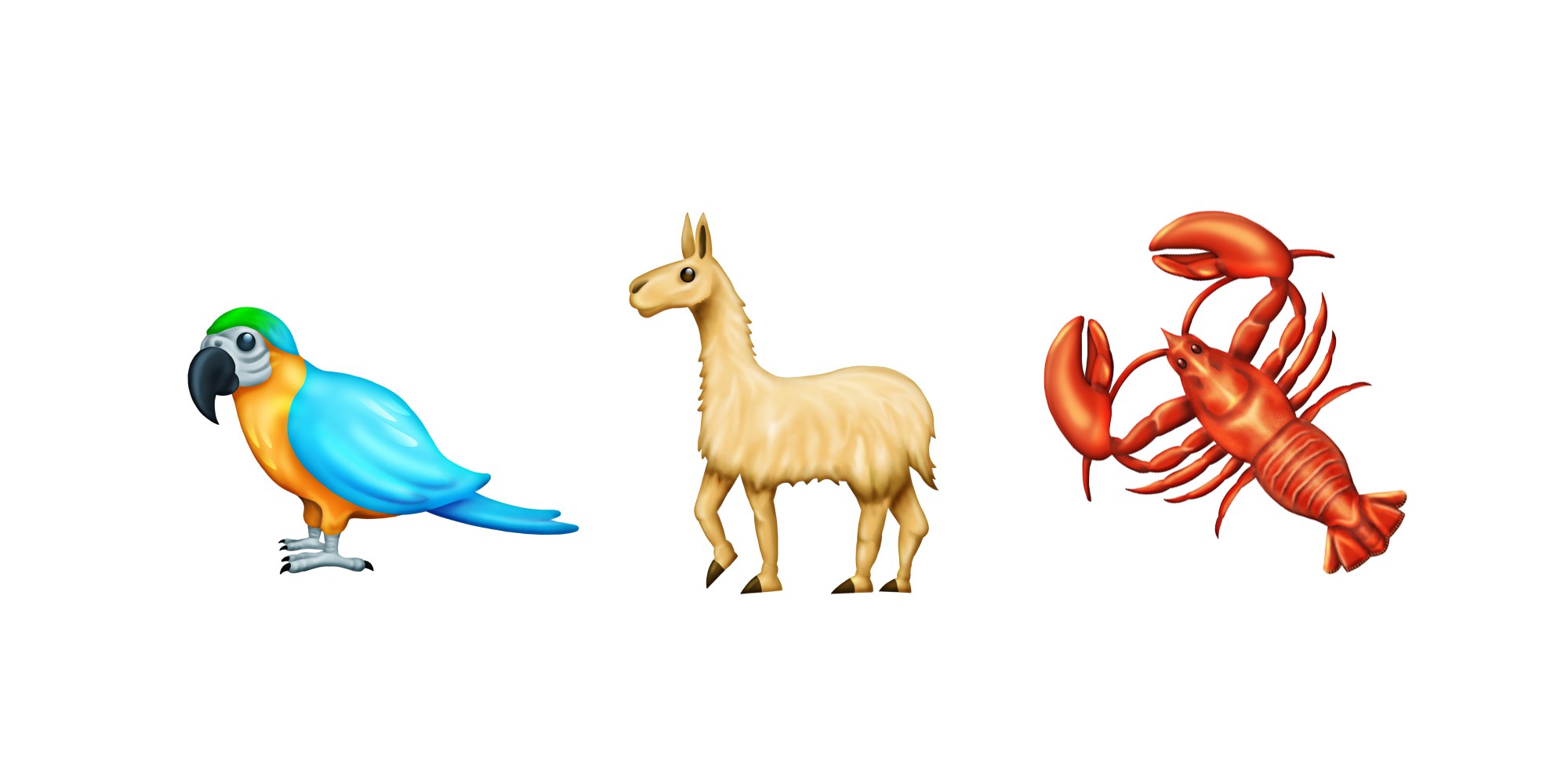 In total, 66 new emoji code points exist in Unicode 11.0. 62 of these are for emojis you'll see on the keyboard: 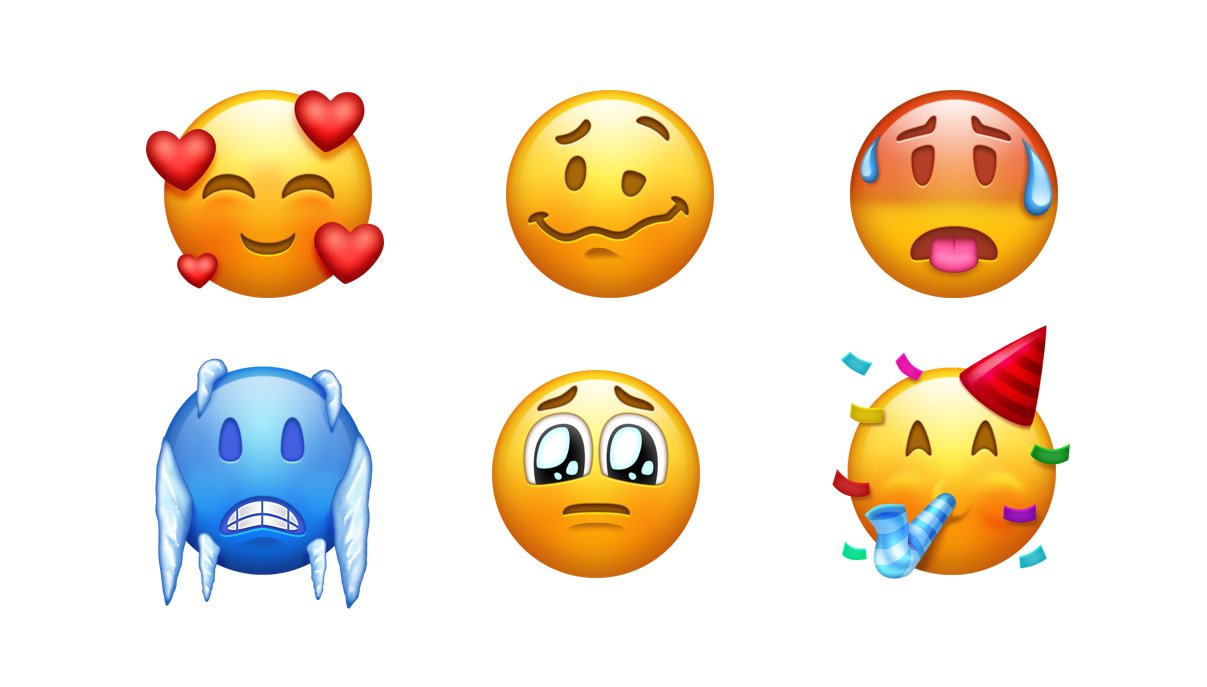 Additionally, four emoji components have also been added in Unicode 11.0. These are for use in sequences (such as a woman with curly hair or a man with red hair) but not expected to be shown as their own characters on emoji keyboards:

All the details of this release are available in Unicode's extensive documentation, but for a summary of what else is new from an emoji perspective, read on.

Unicode 11.0 contains 684 new code points, 66 of which are considered to be emoji or emoji component characters.

Emoji 11.0 includes sequences that don't require new code points, such as those for genders or skin tones:

Note: The new emoji hair components theorertically allow any emoji to have red hair, however Emoji 11.0 only lists a woman and man with red hair. Redheaded dancers, surfers or brides are not present in this list.

The last emoji release (in 2017) was named Emoji 5.0. Logically one might assume the next release would be called Emoji 6.0.

So what happened to Emoji 6.0? It was decided that as most[2] emoji releases come out at the same time as a full Unicode release, they would better versioned with the same numbers.

A timeline document published by Unicode in 2017 notes:

“This proposes ‘turning the volume up to 11’: changing the version number for Emoji v6.0 to Emoji v11.0 to synchronize major versions of Emoji and Unicode. If an intermediate version of the emoji data and/or UTS #51 is needed (adding RGI or emojification) those can use minor or update versions (such as 11.1 or 11.0.1).”

As with all emoji sets, designs vary by vendor. It's expected major vendors will be implementing their own version of these emojis in the coming weeks and months.[3]

Emojipedia creates sample images in an Apple-like style to show how we think they might look, and this is our full set of mockups for 2018:

Since posting this video, we changed the appearance of a few designs, but this video still gives a good overview of what to expect on phones this year. 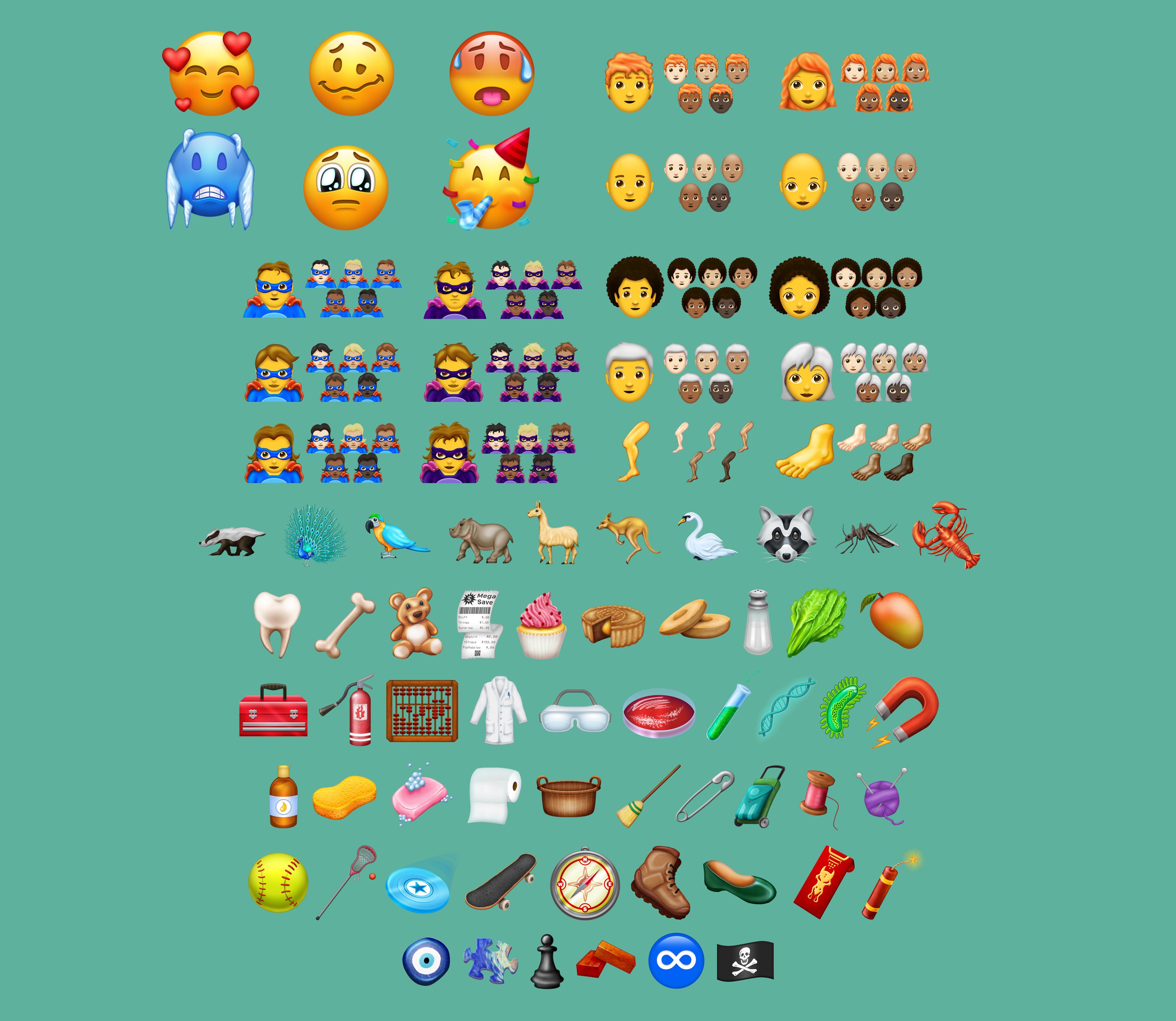 Above: Emojipedia Sample Images for 157 new emojis released in Emoji 11.0.

How do I get the new emojis?

When will each company support the new emojis?

At the time of writing, no major vendor has released their 2018 emoji updates. Based on historical trends, this is when we expect to see releases come to consumers.

What else is in Unicode 11?

Characters that are new in Unicode 11.0 but are not emojis include a series of half-stars. These allow the common method of scoring reviews as a number of stars and half-stars to use Unicode characters within text rather than images (or ★★★½).

Above: Half stars aren't emojis, but they are part of Unicode 11.0. Image: Shirriff / West Proposal.

A Copyleft symbol (looks like a © copyright symbol flipped horizontally) is also new in Unicode 11.0 as well as new scripts and characters from lesser-used languages.

Why isn't there a flamingo?

Flamingo and White Heart are two of the emojis most requested by Emojipedia users in 2018. Both are shortlisted for the 2019 release of Emoji 12.0. 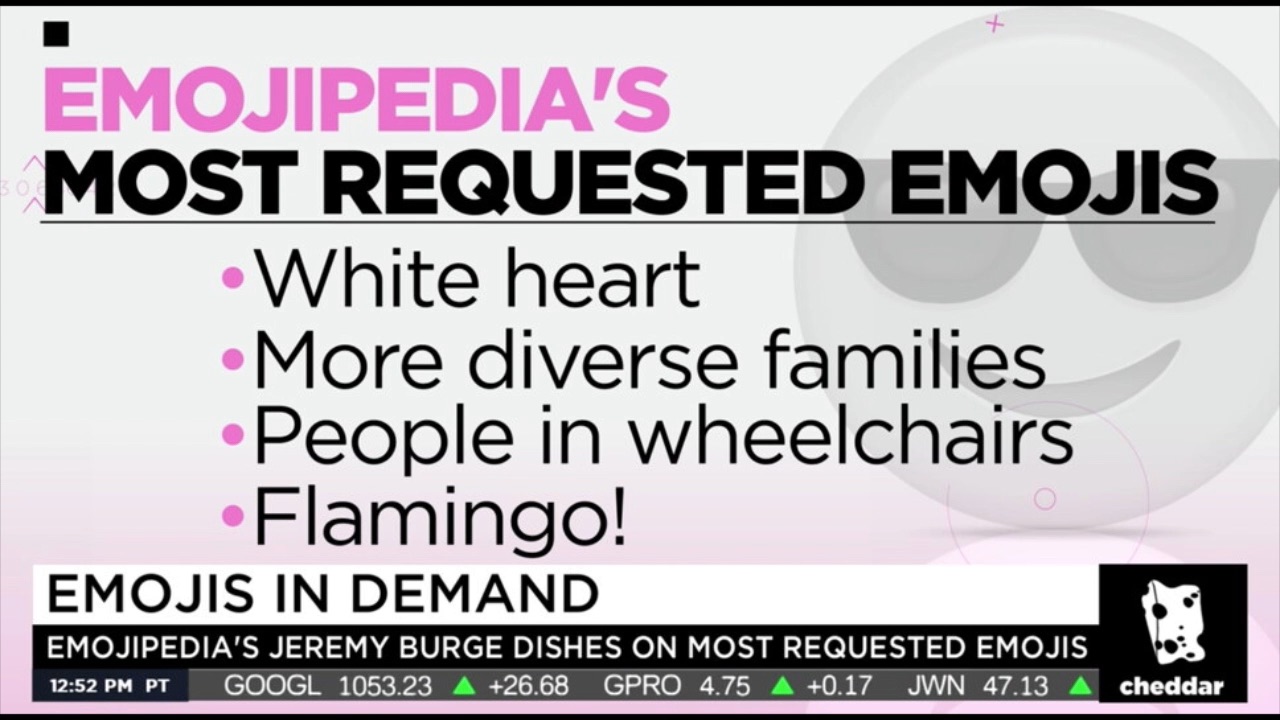 Above: Some of Emojipedia's most requested emojis are shortlisted for 2019.

The next Unicode release is planned for March 2019. Some of the draft candidates include a diving mask, axe, waffle, diya lamp and hindu temple.

Note that at this stage these are only candidates, and no decisions have been made about the final emoji list for 2019.

If you start seeing missing characters on your social media in the coming months, Unicode 11.0 could be the reason.

As platforms release their emoji updates at different times, there is often a period where some users begin sending new emojis while others cannot yet see them.

One solution to this is to copy and paste the missing character (usually shown as a box with an X or question mark in it) into Emojipedia's search field which will show you what it's meant to be. Or send it in a tweet to @botmoji for an immediately reply. 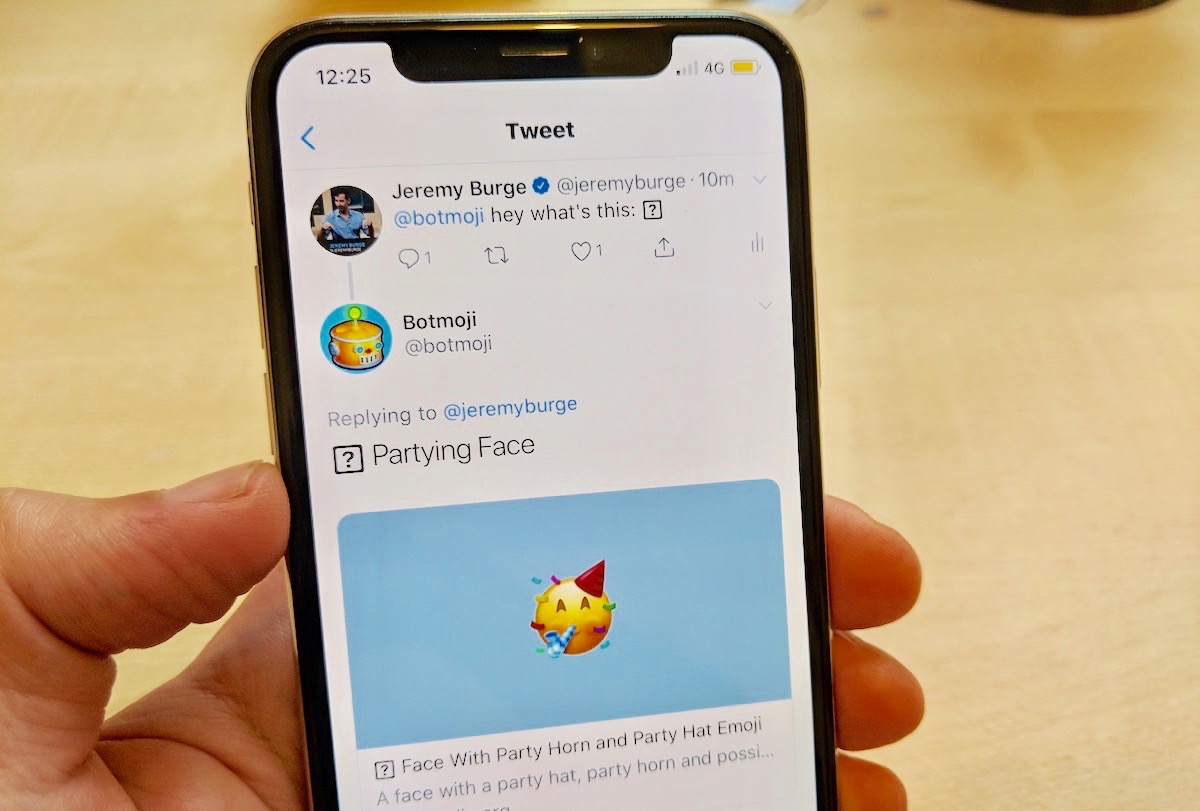 Above: Emojipedia's @botmoji Twitter account can detect any emoji sent to it. Even those not yet supported by major vendors.