Twitter on Wednesday rolled out an update to the custom emoji images it calls Twemoji. In total 787 new emoji characters are supported, and one of the more obvious changes is this:

Above: Emoji modifiers are supported in Twemoji 2.0.

Unicode 7 and Unicode 8 emojis are now supported, bringing Twemoji on par with the support that Apple includes in iOS 9.1, and has more emoji functionality than the Google Android 6.0.1 update (which lacks modifiers).

Above: Modifiers, Families, Unicode 7, Unicode 8, and ZWJ emojis in Twemoji 2.0.

These emoji images are a collaboration between Twitter's Design Team and The Iconfactory, and the project to update this emoji set was started in July of this year.

This is a feature approved in Unicode 8.0 mid-2015, and first seen in the iOS 8.3 update from Apple earlier this year. It's now also supported by Microsoft in Windows 10. 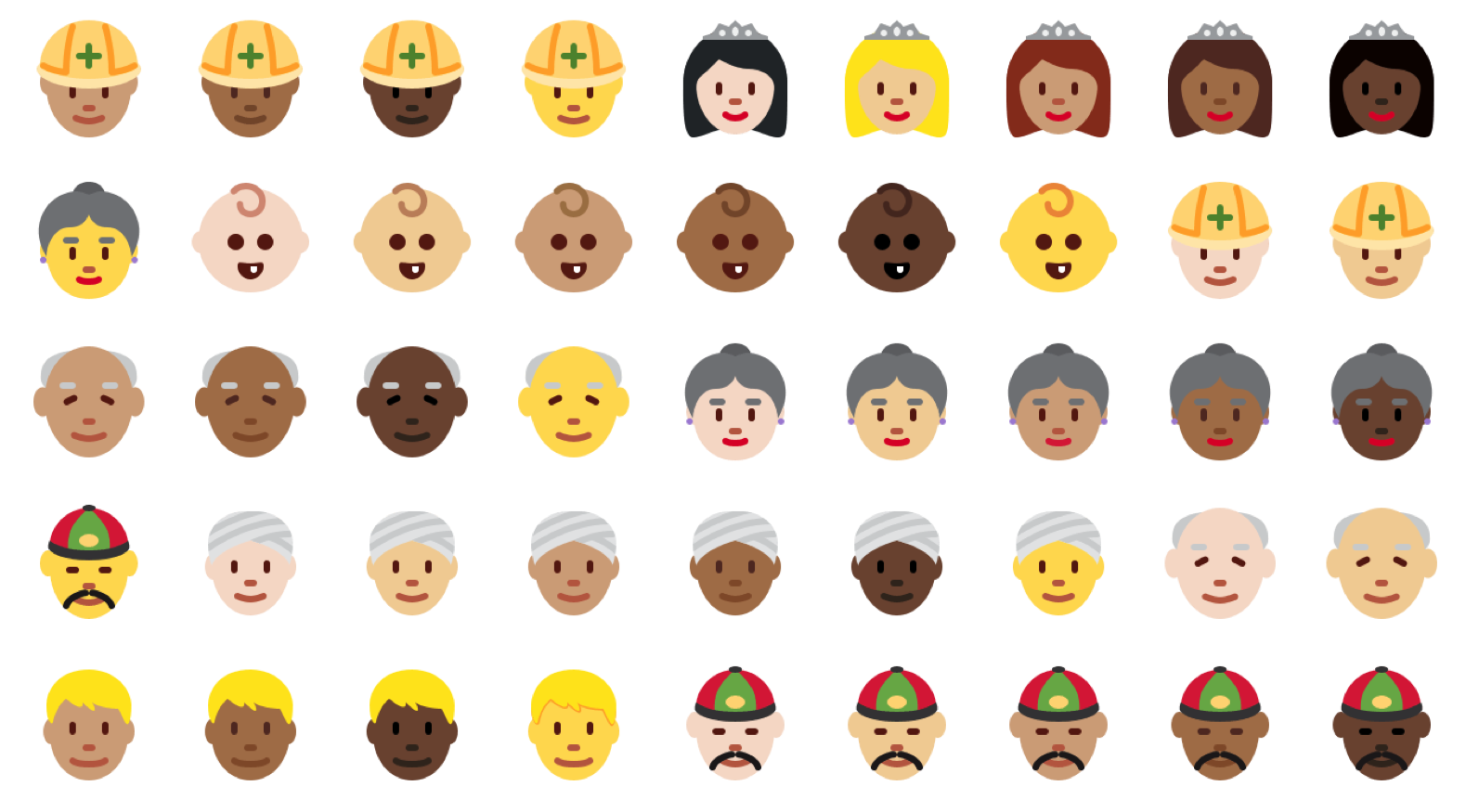 In a point of difference from other platforms, each default ("non-human" skin tone) emoji has orange hair.

By way of comparison, iOS sticks to yellow hair for the yellow faces, and Microsoft tends to use black hair brown hair (or no hair) for the default-emoji appearance. 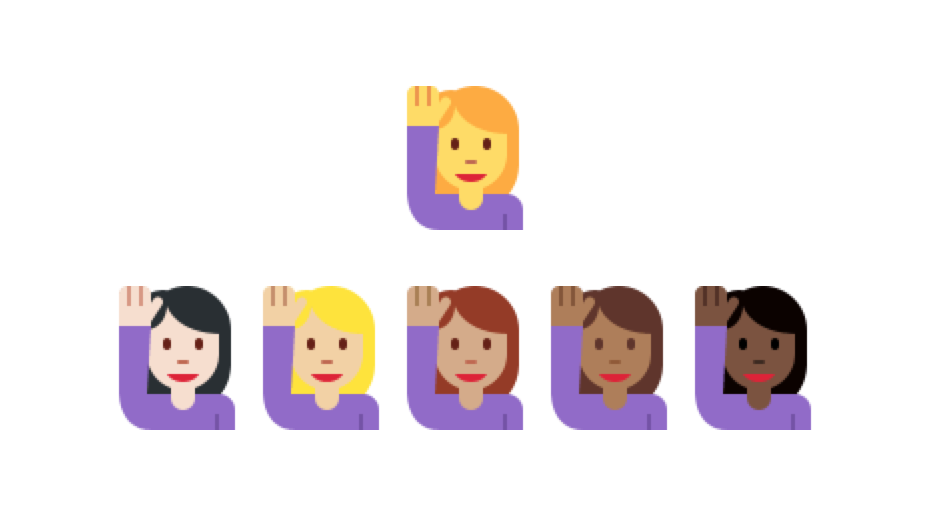 Above: Redheads get representation in Twemoji.

Twitter's design manager Bryan Haggerty reassured me that this wasn't due to any redheads on the team feeling slighted.

The choice of orange hair was to ensure the default (non-human) appearance look distinct from the emoji-modified characters.

Above: Snowboarder has multiple skin tones available in Twemoji 2.0 not present on iOS or Windows.

Zero Width Joiner sequences are a strange beast. They basically come into the world when a vendor decides to introduce one, and with no formal approval required, what we have seen in 2015 has been: 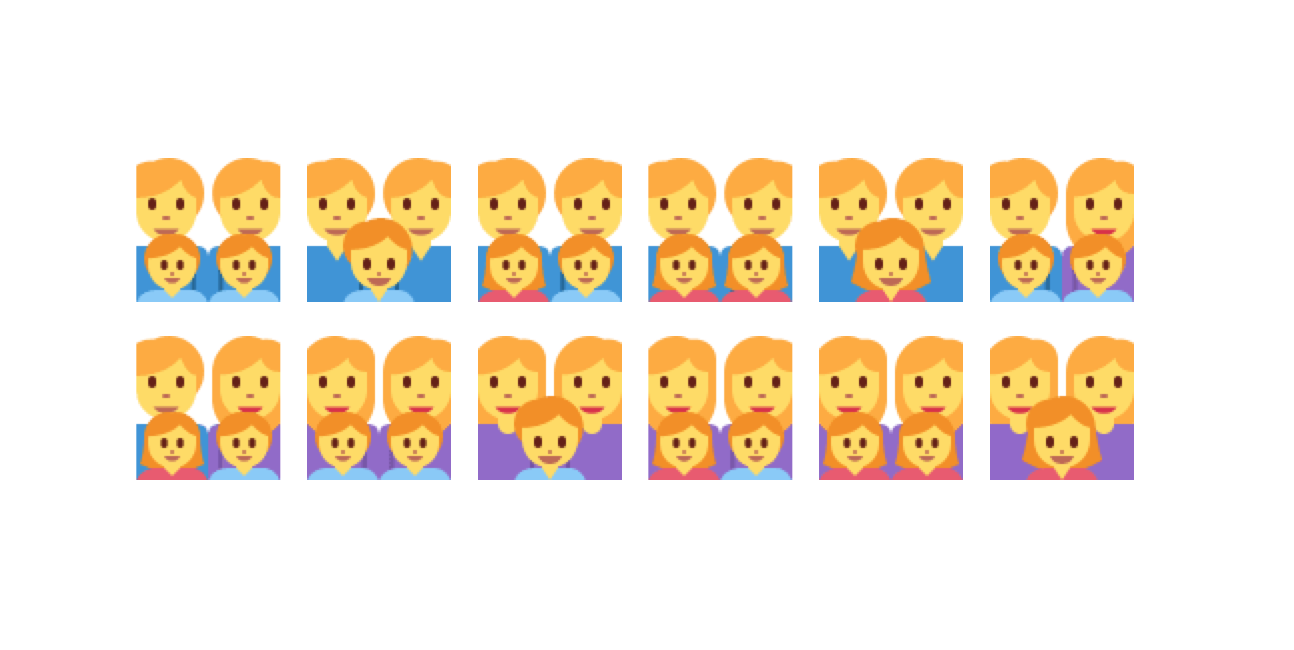 Above: Family combinations are supported in Twemoji 2.0.

Recognizing that compatibility with other platforms is key, Twemoji now supports everything that we see on iOS and Android:

Above: Three varieties of the kiss emoji on Twitter.

Lastly the ZWJ sequence of 👁 Eye and 🗨 Left Speech Bubble to create the Anti-Bullying emoji is included:

It would be interesting to see if Google or Microsoft add new ZWJ Sequences in future (for a family of five, perhaps?) and whether other vendors would in turn support those as well.

Twemoji has dramatically increased the number of supported flags, going from 10 up to 257 in the latest update.

All countries in ISO 3166-1 are included[1] in the latest flag update, including special cases like Kosovo and the European Union. 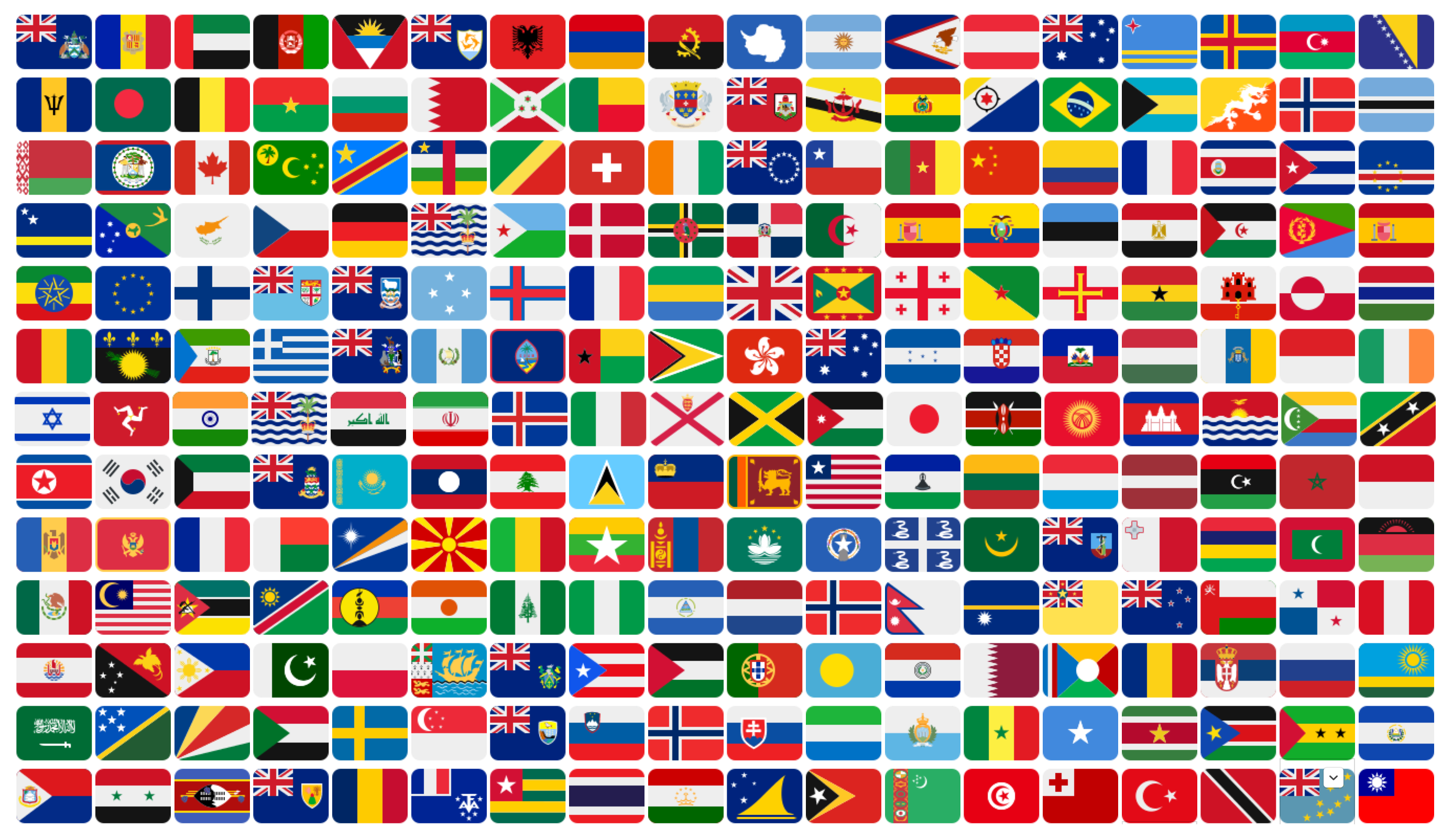 Until now, Twitter has shown two-letter regional indicator codes instead of flags for all-but ten countries. This is a huge improvement[2].

For a full list of every new emoji supported in Twemoji 2.0 check out this list for iOS 9.1, which is actually the same[3] set.

Above: New Faces from Unicode 8.0.

Of all the new faces available since iOS 9.1, Upside-Down Face has been the most popular on Emojipedia, and I suspect will be just as popular on Twitter. 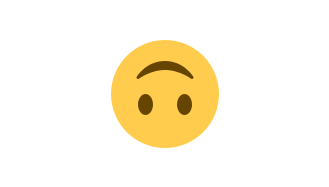 🤔 Thinking Face is pretty consistent across platforms, with only slight variations. Mostly in the eyebrows[4]. 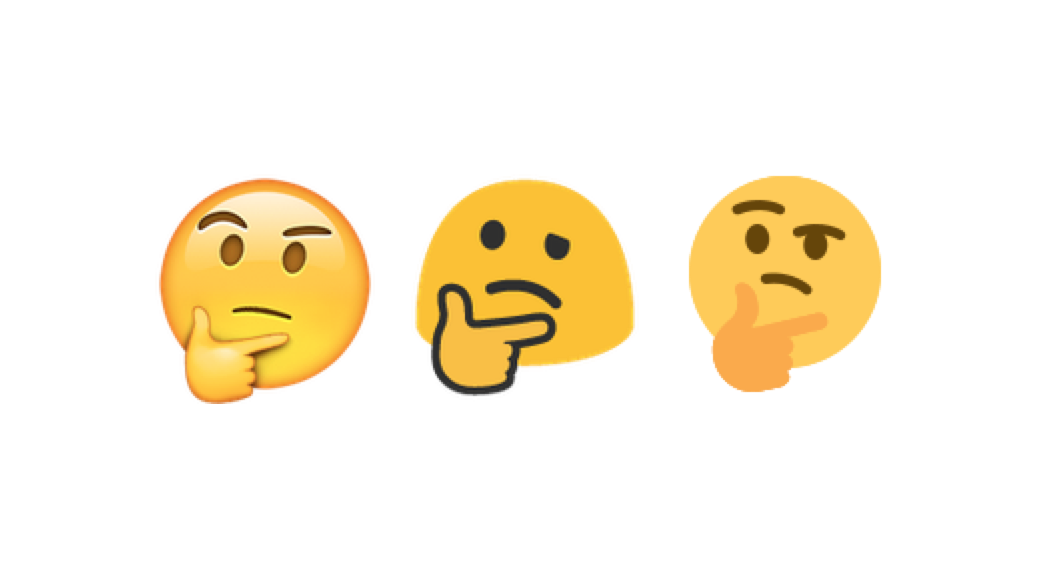 New sports also come from Unicode 8. Notably, the hockey sticks are easier to see at small sizes than the equivalents on other platforms.

And these views are courtesy of Unicode 7:

Other popular additions have been the taco, middle finger, bed, and cheese. I can't include every new emoji image here, but have a browse of Unicode 7 and Unicode 8 to see all the new emojis available.

Some older Unicode characters have also been given an emoji presentation, in line with the latest version of the Unicode standard.

Above: Older Unicode characters that have been given an emoji presentation.

📳 Vibration Mode now shows vibration lines instead of a heart: 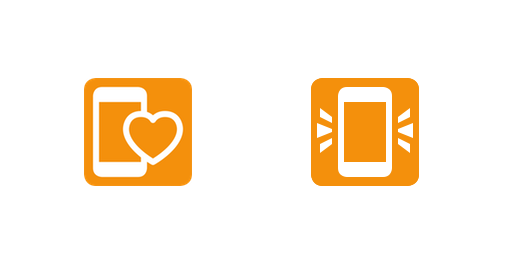 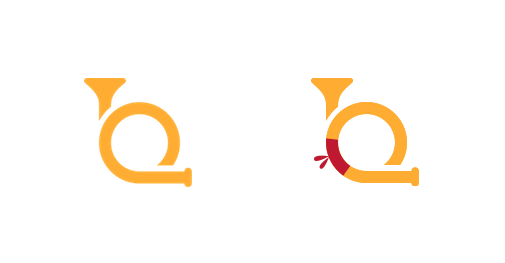 🏤 European Post Office has the postal horn added to the front: 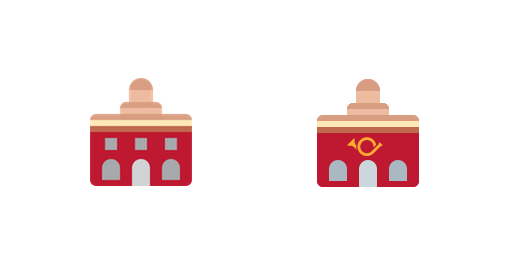 📈 Chart With Upwards Trend and 📉 Chart With Downwards Trend have changed colors - now matching those from Apple with red (up) and blue (down): 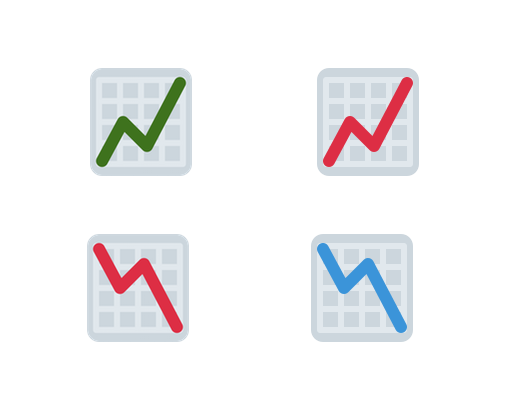 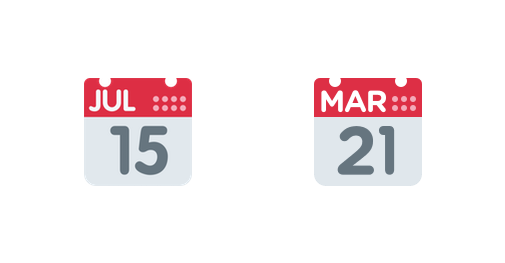 🏁 Chequered Flag gets a slight wave: 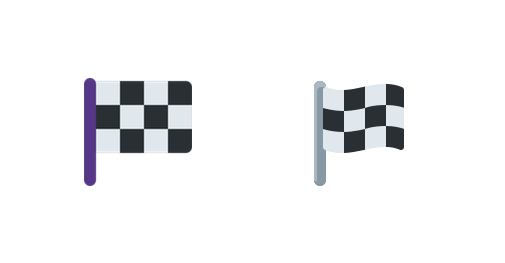 💳 Credit Card is now yellow/orange instead of gray: 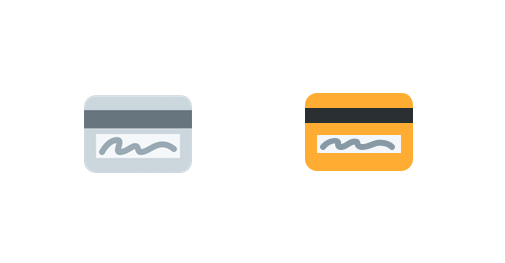 🏢 Office Building gets a makeover[6]: 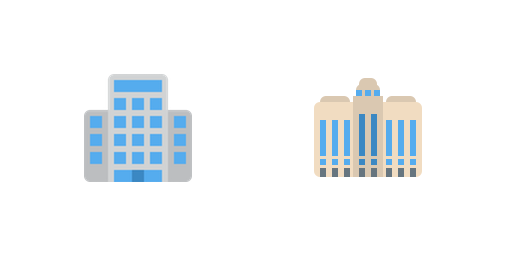 Twemoji 2.0 is now working for all users of the Twitter (desktop) website, but Vine and Tweetdeck users will have to wait for updates which are planned for release "soon".

Twitter has confirmed they will be releasing these images as part of their open source Twemoji project, but at this stage, the repository has yet to receive those updates.

View all emojis from Twemoji 2.0.