Update: Windows 10 has been released to the public as a free upgrade on July 29, 2015. All emoji updates listed below are included.

Skin tone modifiers, the middle finger, and a sassier information desk person are amongst the emoji updates in Windows 10.

Scheduled for release mid-2015, Microsoft brings a range of changes to their color emoji font, Segoe UI Emoji, in Windows 10. This includes the emojis shown above:

Some may be surprised to learn that emoji support on Windows is not new. It dates back to 2012, with the release of Windows 8. The lack of support for emoji when using Chrome for Windows may be a factor in this.

Taking on board the Unicode recommendation that the default skin tone of emoji people should be generic (nonhuman) in appearance, Windows now displays gray-skinned people as the race-neutral default. This is used when no specific skin tone is chosen.

Google and Apple use a bright shade of yellow as the default skin tone, making Microsoft the first to use gray as the default. This is the result: 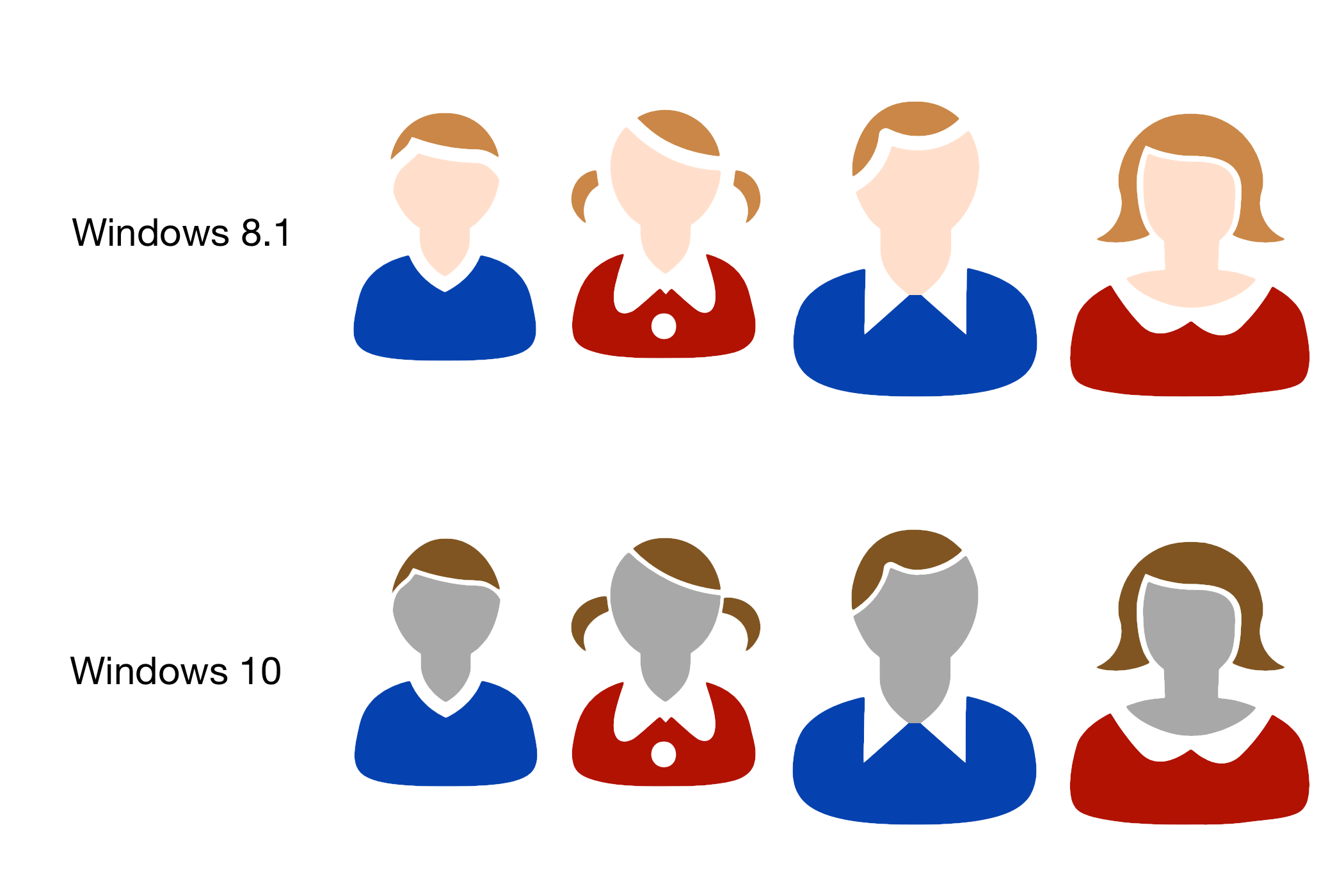 Above: Windows 8 defaults to cream/white-skinned people, while Windows 10 defaults to gray skin

A choice of skin tones is available for most human-looking emojis, which fall into the previously discussed range of five skin tone modifiers.

Many human emojis in Windows use the bald-man (?) character, which neatly avoids the issue of hair color altogether.

The Middle Finger Has Arrived

The middle finger emoji was approved as part of Unicode 7 in mid-2014, yet has curiously remained absent from iOS, OS X, Android, and Windows. Until now. 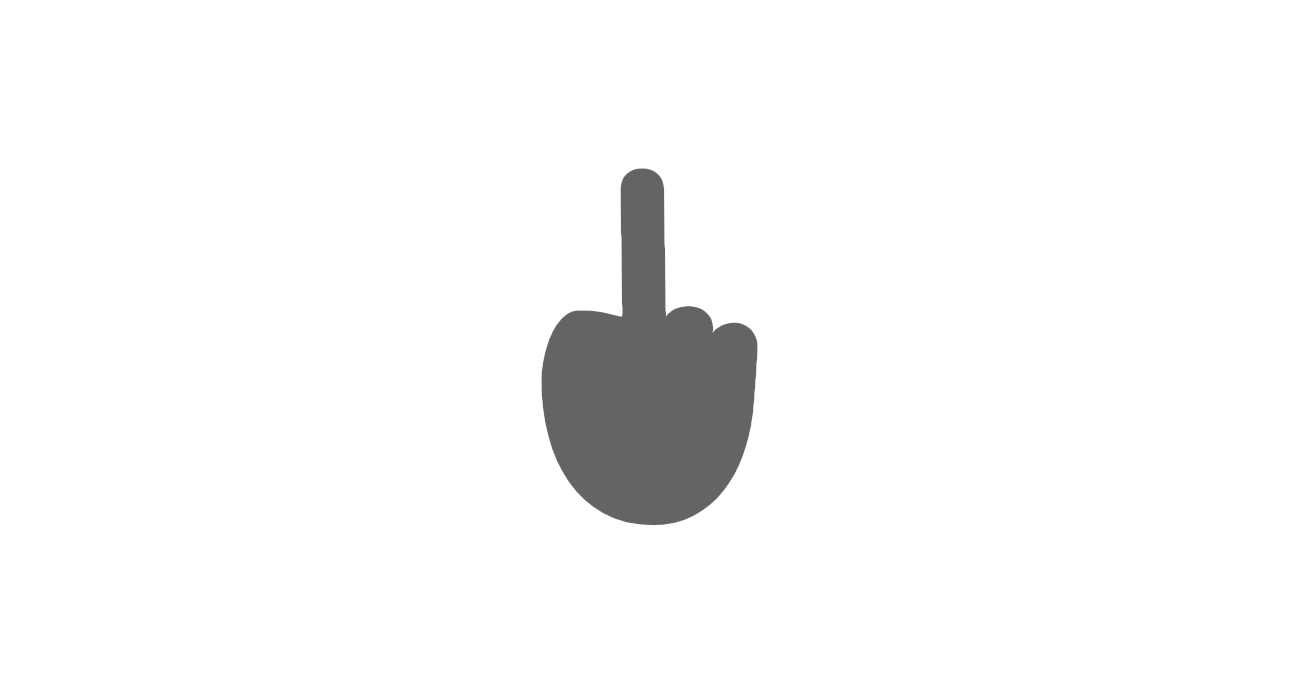 If this is not expressive enough, a range of skin tone options exist from the pale middle finger, through to the black middle finger.

Above: Middle Finger Emoji shown in default gray, next to the diverse skin tone options.

Less likely to grab headlines are some of the more subtle changes to the emojis included with Windows 10.

Most of the following updates focus on bridging the gap between how some faces appear on other platforms, and how they appear on Windows.

😤 Face With Look Of Triumph now directly matches its counterpart from Apple and Google.

😫 Tired Face has lost its quiet yawn (which would have made for a good sleepy face), and now appears tired in the context of being fed up ("I'm so tired of this!"), or exhausted:

😱 Face Screaming In Fear has hands on either side of the face, more closely resembling the artwork from iOS and Android:

😳 Flushed Face has shaded cheeks, implied to be blushing. Has black-and-white striped circles instead of rosey-red cheeks:

😷 Face With Medical Mask replaces what might have been a dust mask with a surgical / medical mask:

💁 Information Desk Person now resembles Apple's iconic version of this emoji, showing a woman with her hand out to one side. Often used as a sassy emoji, Microsoft ups the ante by giving her a wink. Too much?

🙁 Slightly Frowning Face and 🙂 Slightly Smiling Face have been added in Windows 10. Approved as part of Unicode 7 in 2014, this pair are not available on prior versions of Windows, nor iOS, OS X, or Android:

🖖 Raised Hand With Part Between Middle And Ring Fingers (aka the Vulcan Salute) has been added to Windows 10. Only just beaten to the punch by Apple in its 2015 Emoji Update:

🖐 Raised Hand With Fingers Splayed looks like a person holding up the number five on one hand. Included for the first time on Windows 10:

The full set of Unicode 7 characters are supported on Windows 10, but only the five above-mentioned emojis are given an emoji presentation. The rest appear to be black-and-white (text-presentation) glyphs brought over from Webdings. 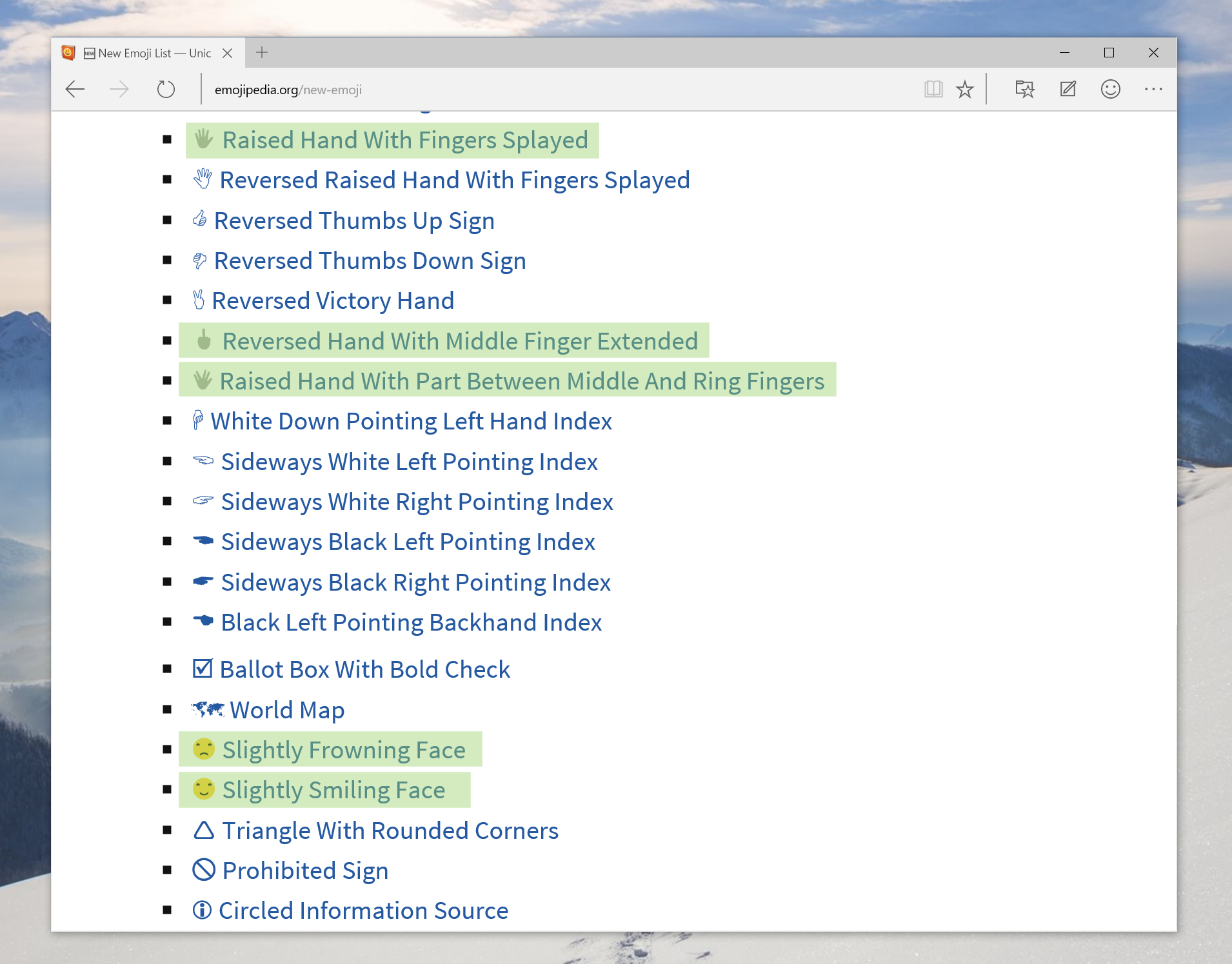 Above: Five new emojis highlighted in green. The rest are black and white symbols not yet implemented with color emoji presentations

💇 Haircut now displays a woman having her hair cut, instead of scissors and a comb standing alone:

🀄 Mahjong Tile Red Dragon gains some color with the red 中 character on the tile:

🎠 Carousel Horse now faces to the left, instead of the right. This now matches the carousel-horse direction on other platforms:

Flags remain unsupported on Windows, which instead displays the two-letter regional code for each country. 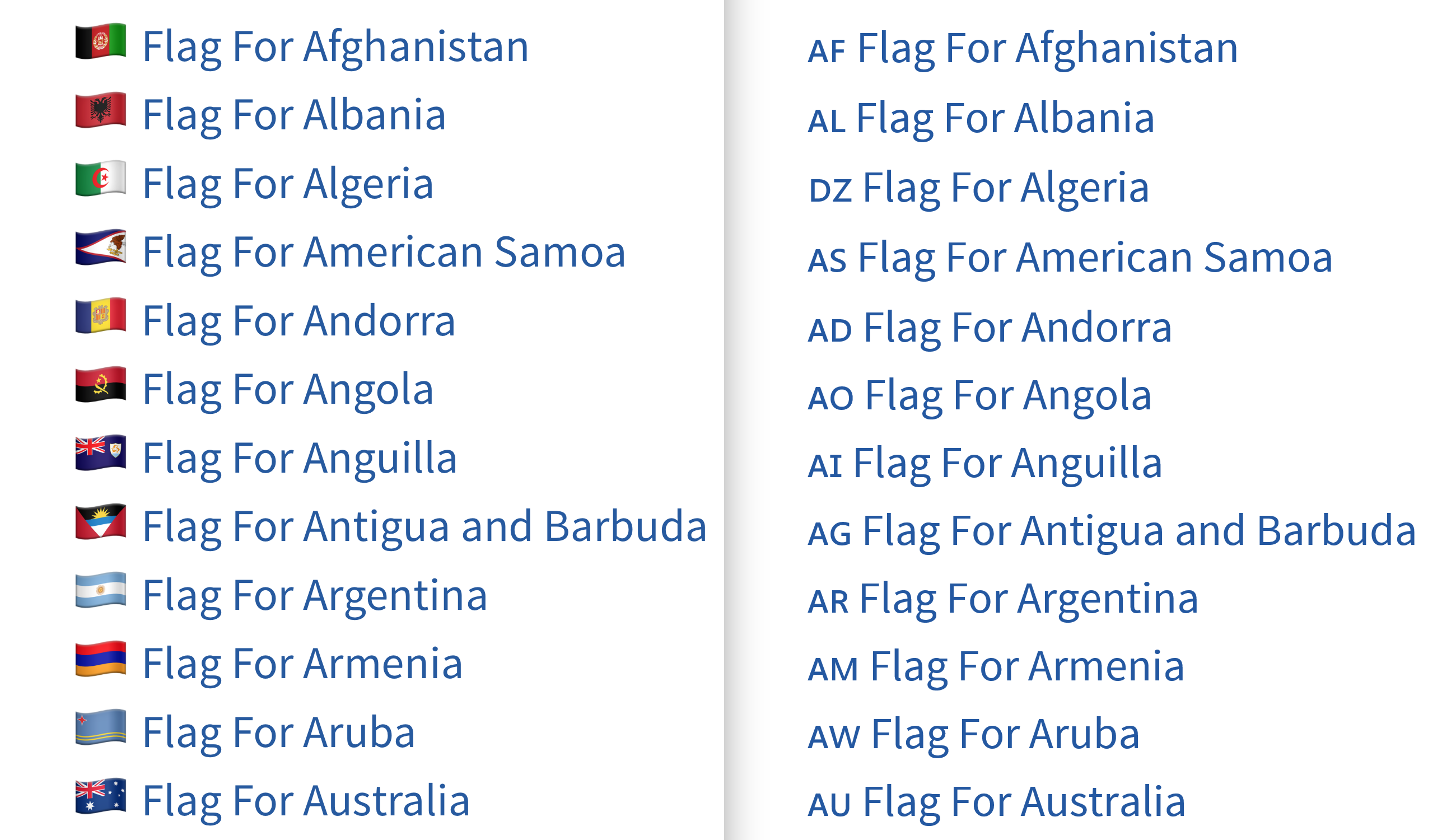 Support for different family combinations (two mothers or two fathers) and same-gender couples is also absent from this update.

Support for color emojis in Windows 10 is limited to the new Microsoft Edge browser, and these only appear when the specific color emoji font is specified.

As such, it's not uncommon to see the black and white (text presentation) variants of these emojis across many websites and in other apps, which may limit their appeal. 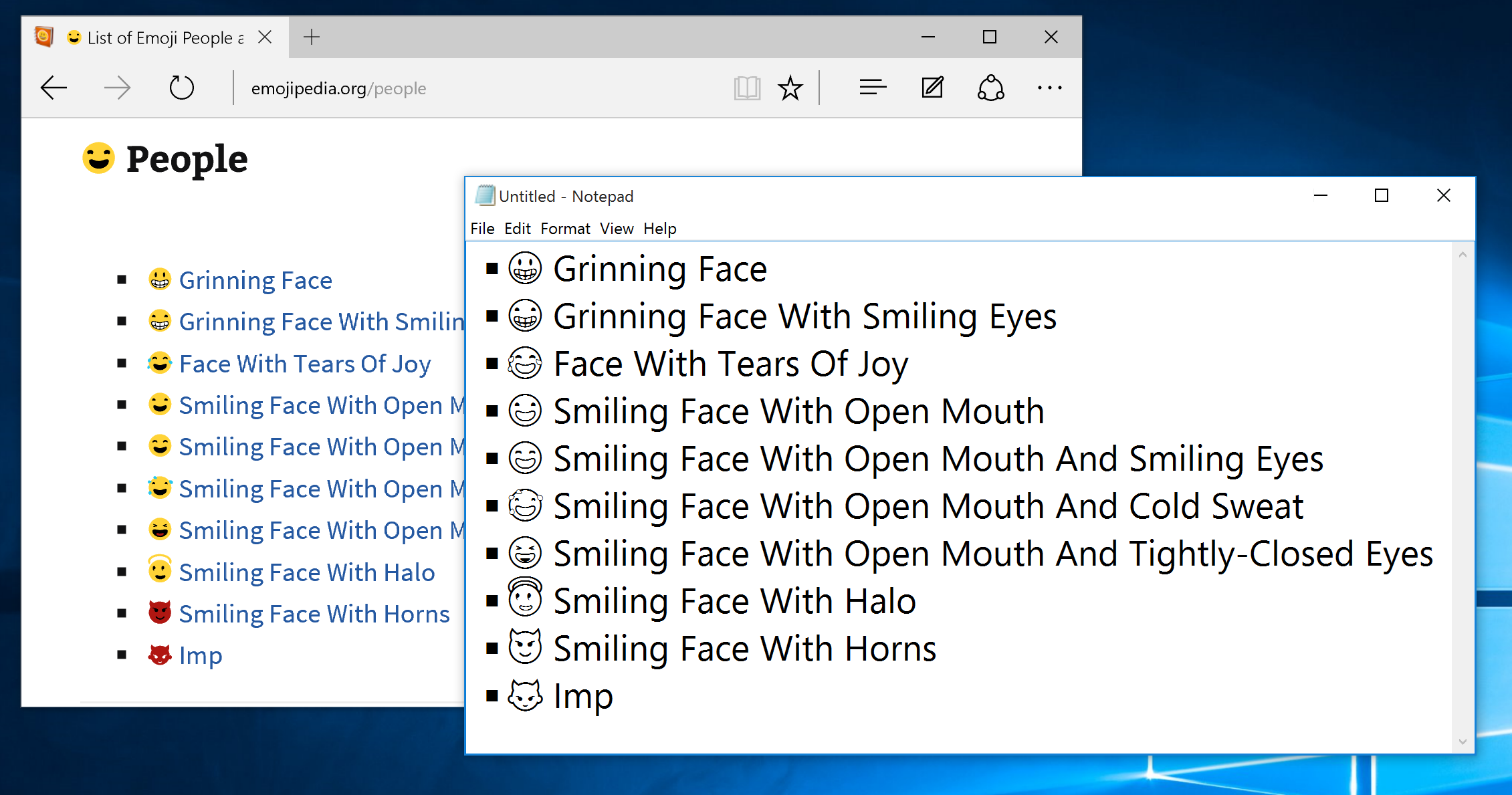 Above: Windows 10 uses black and white emojis in most apps, except Microsoft Edge

By comparison, OS X defaults to the color emoji font when a color emoji is used, regardless of browser or font. For users, this is a more consistent implementation.

For emoji fans, Windows 10 is a decent update from Windows 8.1, but plenty of room for improvement still exists.