Questions about Samsung emoji support are a frequent occurrence on Emojipedia's various social media accounts. In particular, users often want to know why they don't have emojis that other platforms include.

Samsung has come a long way to making various emoji designs closer to other platforms in the past few years, but some oddities remain when it comes to exactly which emojis are on offer.

For example, a number of emojis were removed from new Samsung devices in 2016, and Samsung confirms these will be back in a software update next year.

These three emojis were last seen on the Samsung emoji keyboard in August 2016: 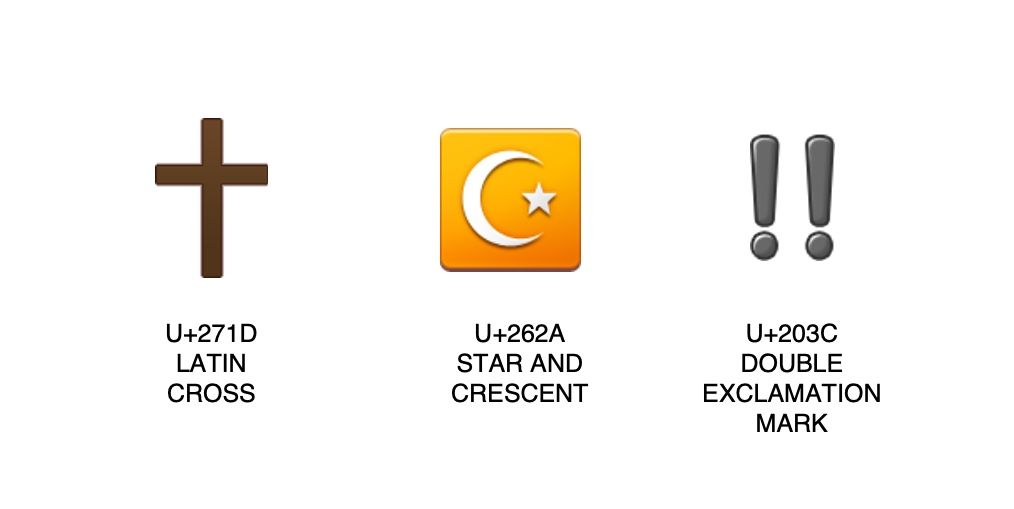 Above: Three emojis removed from Samsung devices in a 2016 software update.

The release of Samsung TouchWiz 7.0 (aka TouchWiz Grace UX 7.0 as it was known at the time) included a bunch of new emoji flags, but removed a number of emojis that had been on Samsung devices since at least 2013. These emojis were taken off the emoji keyboard and no longer included in the Samsung emoji font.

Some removals made sense. There have been a number of non-standard emojis included on Samsung phones which overlap significantly with standard / RGI[1] emoji options which really weren't necessary. The purpose of other removals wasn't as clear. 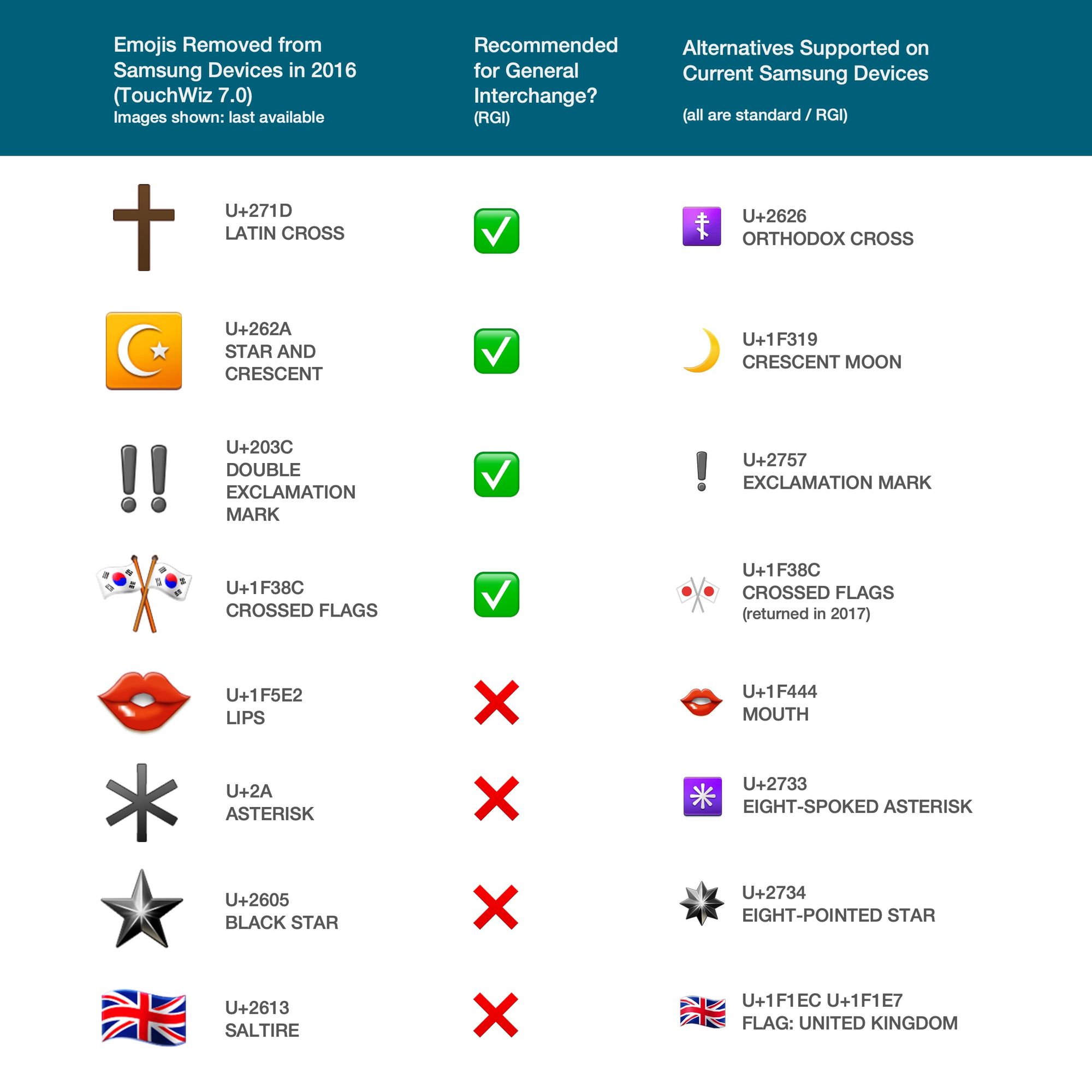 Above: Emojis removed from Samsung devices in 2016. One has since returned (🎌 Crossed Flags).

Some non-standard emojis remain supported (as in, they will display if sent from another device) yet hidden from the emoji keyboard so they are less likely to be used.

Samsung users: you might not have realized this, but a number of emojis on your keyboard didn't work anywhere else for years.

Most notably, a Unicode character known as 🖒 Reversed Thumbs Up Sign (which pre-dated Unicode emoji support) appeared on Samsung devices like any other emoji but was never supported as an emoji on other platforms.

Samsung users unwittingly trying to convey a simple thumbs up emoji ended up with a 50:50 chance of sending their friends what's known as tofu - a missing character box - in place of the standard 👍 Thumbs Up Sign.

This can happen because while Unicode sets guidelines for which characters should be implemented with emoji presentation, but these aren't mandatory. Any vendor (such as Samsung) can choose to give any Unicode character an emoji appearance and include it on the emoji keyboard. There's just no guarantee it will display as intended on a recipient phone. 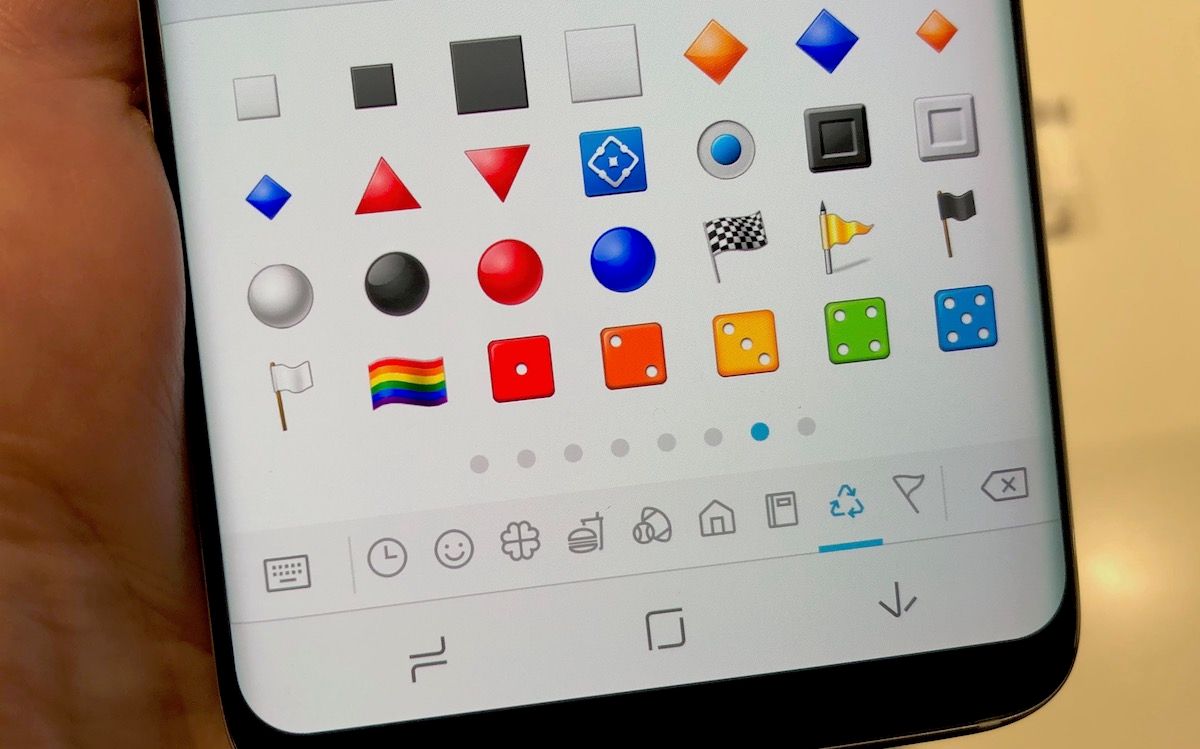 Above: A number of emojis on Samsung Galaxy devices—such as all of these dice—aren't part of the recommended emoji set, and won't display on other devices. Photo: Jeremy Burge / Emojipedia.

We recently analyzed Botmoji search data and found that 🖒 Reversed Thumbs Up Sign is the most queried non-standard emoji sent to our Twitter bot which explains what an emoji is; implying that many people have been sent this character from Samsung devices but were unable to determine what it was.

Lookups of this character are now dropping since its removal from the emoji keyboard in 2017.

I asked Samsung about the missing ✝️ Latin Cross, ☪️ Star and Crescent and ‼️ Double Exclamation Mark emojis, which remain missing on all current Samsung Galaxy series phones, and whether their removal was a bug or a deliberate choice.

The short answer is that these were removed due to incompatibilities with earlier emoji fonts on Samsung devices, and not an editorial decision relating to the content of these characters.

Regarding the ‼️ Double Exclamation Mark specifically, a Samsung representative clarified that this was originally implemented using a non-standard code point:

“We had issues where this emoji had a unique unicode [code point] of its own which overlapped with our device code for another, which didn't allow us to provide this particular emoji.”

For the ✝️ Latin Cross and ☪️ Star and Crescent another issue arose, where the color emoji implementation of these characters caused the plain text versions of these symbols (✝ and ☪︎) to appear as emojis. The workaround was to simply remove the emojis until fixed. Again, Samsung:

“We had a period where these symbols would clash with our emoji codes for these symbols, and the output would appear as emojis instead of keyboard symbols.”

The good news is that these are returning in next year's Samsung Experience 10.0 release.[2] 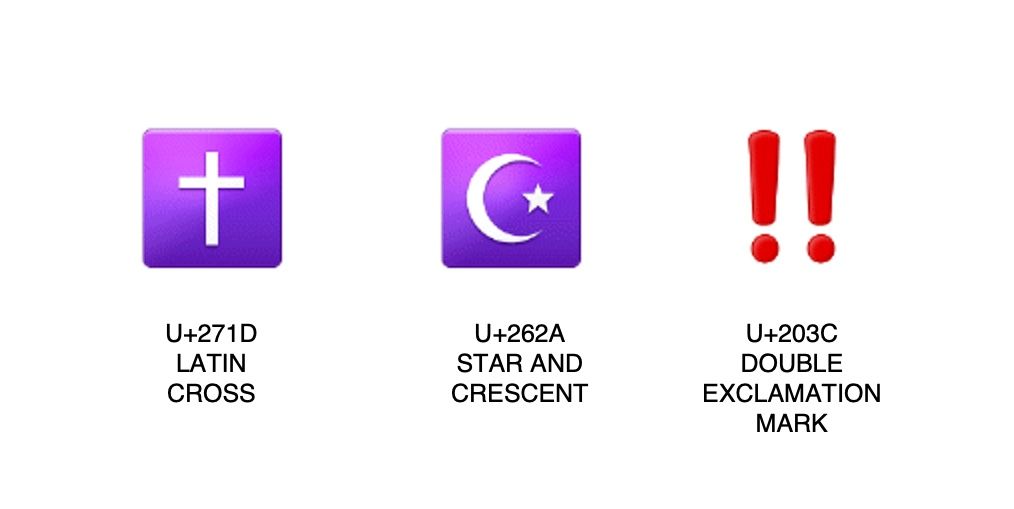 Above: These three emojis are returning to Samsung devices in a 2019 software update.

Not clear at this stage is whether any of the other non-standard emojis will remain in next year's released or if these will be removed along the same lines as the 2016 set update.[3]

Of the non-RGI emojis in Samsung Experience 9.5 (the latest public release), many appear to be misinterpretations of Unicode characters that pre-date emoji.

For example "Black Snowman" was intended as a solid snowman in a pre-emoji world but Samsung is the only vendor currently shipping ⛇ Black Snowman in their color emoji font. 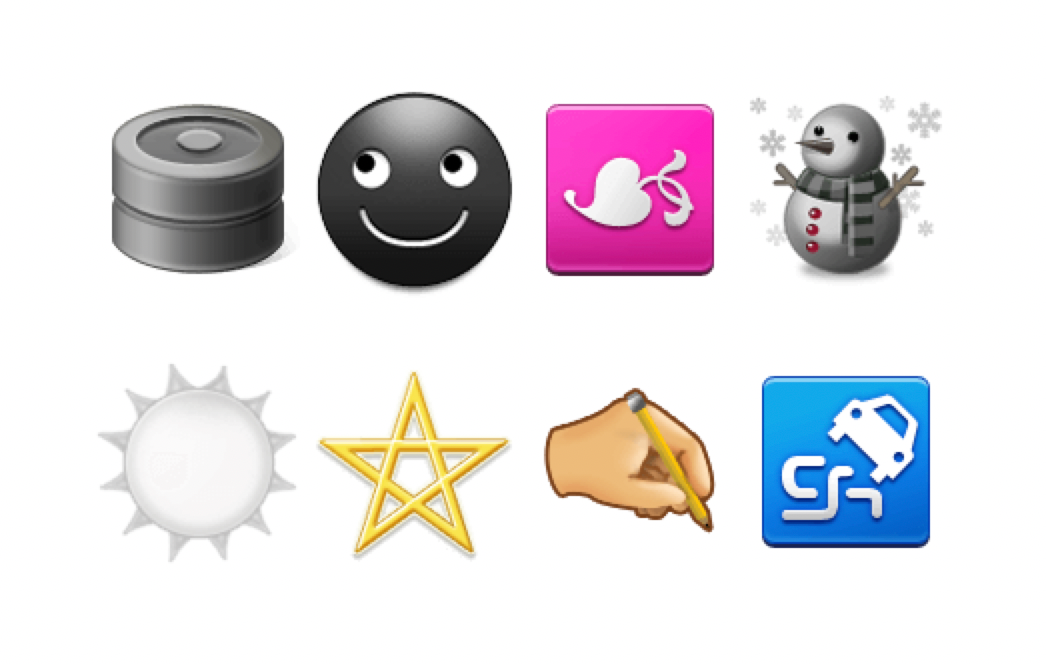 Above: Regular Unicode characters included as emojis on Samsung devices.

Rollout of Samsung Experience 10.0 (publicly being branded now as Samsung One UI) is expected to begin in 2019, and it is in beta now.

New emojis added in Samsung Experience 9.5 may also be added to the emoji keyboard in this upcoming release. At the time of writing, new emojis are supported on Samsung's latest software update, but a third party emoji keyboard such as Gboard (or copy and paste from the web) is required to input these. 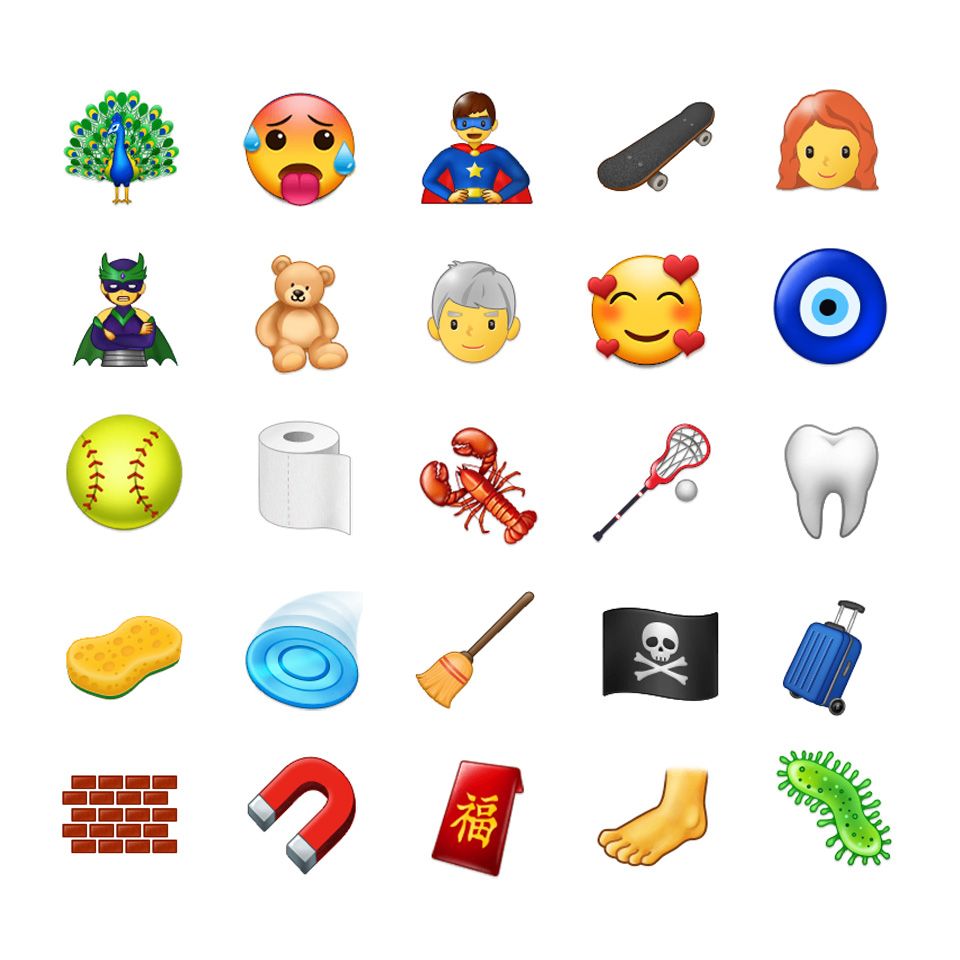 Above: New emojis added to Samsung's emoji font recently. May be added to the emoji keyboard for input in 2019.

As always, there's more than initially meets the eye when it comes to emoji compatibility.