Samsung has begun rolling out another set of updates to its emoji set. These changes contain design revisions which give further credence to 2018 being a year of increased emoji convergence.

Samsung’s last emoji update was in February of this year, when Samsung Experience 9.0 introduced Emoji 5.0 characters such as 🤩 Star-Struck and 🤪 Zany Face to Samsung devices.[1]

While this new update does not introduce any new emojis, the noteworthy changes littered amonsgt the 519 (most minor modifications) continue the emergent trends of Samsung Experience 9.0: faces being revised to better match other vendor designs.

An example of this is the 😎 Smiling Face With Sunglasses, which has now total abandoned its Squirtle Squad leadership vibes in favour of a more standard depiction.

The size of this sunglass-adorned emoji's head has also been increased in size to be more in line with that of the other smileys.

Other emojis which have undergone this mild augmentation along with other minor tweaks include 🙄 Rolling Eyes, 🤬 Face With Symbols on Mouth and 😏 Smirking Face.

However, the 🤔 Thinking Face and 😔 Pensive Face have probably experienced the most significant changes of the facial icons.

🤔 Thinking Face has had its hand decreased in size, placing more emphasis on its facial expression which now has larger eyes and more pronounced eyebrows.

Meanwhile, 😔 Pensive Face is now facing forward as opposed to tilting itself off to the side - a frequently seen modification in the Samsung Experience 9.0 update that this icon had oddly escaped.

Other mild changes to the faces include the 😐 Neutral Face, 😑 Expressionless Face, 😖 Confounded Face and 😕 Confused Face all losing their eyebrows (with the latter's eyes also ballooning). Additionally, 😥 Sad but Relieved Face and 😓 Face With Cold Sweat are more standardised in their design, as is 😪 Sleepy Face now that its little snot bubble is aiming downwards [2].

Moving away from the smileys, the 👻 Ghost has experienced an additional update.

After getting a major re-design in February which retired its long-standing shy yellow-eyes, the little specture's eyes are now full-on 🤪 Zany Face, bring Samsung's design ever more closely in line with Apple's design.

As for other character face icon the 💩 Pile of Poo has had its happy mouth made brighter and therefore more visible and the 😈 Smiling Face With Horns has lost its little snaggletooth.

This colour standarisation has also now been applied to the orientatation variants of both 💑 Couple With Heart and 👫 Couple Holding Hands, as well as the various 👪 Family depictions. 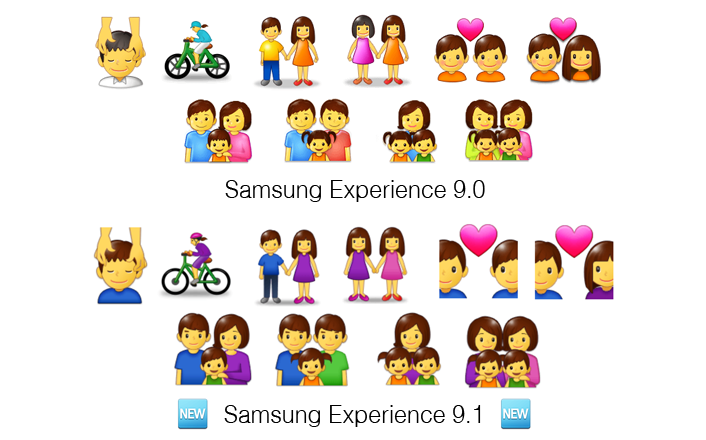 The rosey cheeks previosly seen on the variants of 🙆 Person Gesturing OK, 🤦 Person Facepalming, 💇 Person Getting Haircut and 🤷 Person Shrugging have been removed amongst other design tweaks clearly motivated by a desire for further inter-vendor convergence.

🙅 Person Gesturing No icons has had their arms modified and the lower part of their torso removed. In fact, the 👳 Person Wearing Turbans variants and all of the variants of the 💏 Kiss icon have also lost their torsos in favour of head-only depictions.👨‍✈️ Man Pilot has also lost his moustache, going against the trend seen with other vendors.

Meanwhile, 🛀 Person Taking Bath has had the direction of the person flipped to having their head placed on the left hand side of the bath, and the shower head featured by other vendors added on the opposite end. 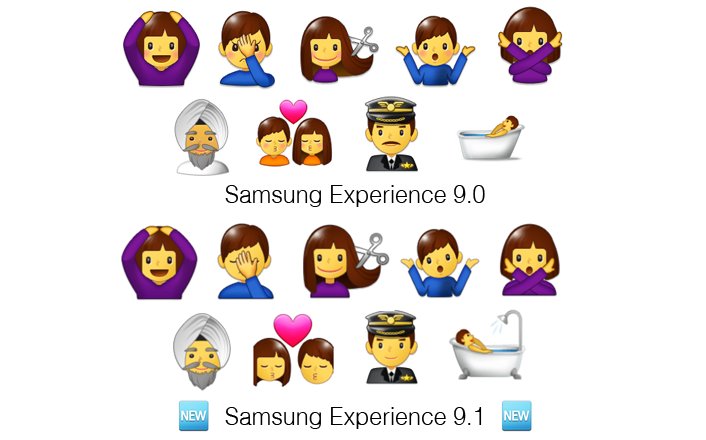 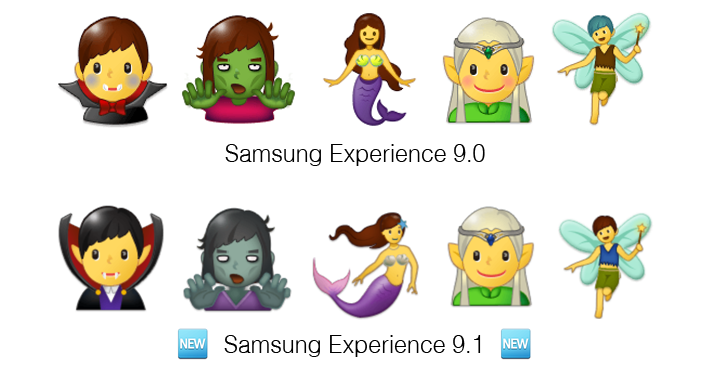 The colour standardization seen across the human icons is also display amongst the fantasy creatures: the 🧝 Elves gems are coded to their Samsung gender colour, while 🧟‍♀️ Woman Zombie is now wearing purple.

Interestingly, 🧚 Fairy designs have had their hair changed from reds and blues to the standard human browns, a move which increases internal colour consistency but actually marks a step away from aping the Apple designs' hair colours.

💟 Heart Decoration no longer features its tartan-like pattern and instead now features the more standard white heart on a coloured block design.

💣 Bomb has had its fuse moved over to be at an angle as opposed to at the very top of the dark black sphere. 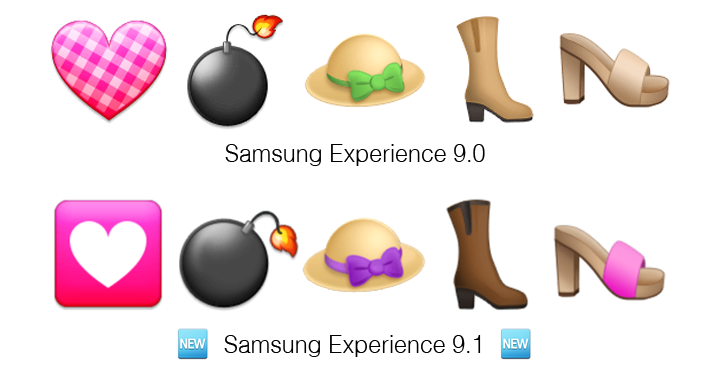 This update has begun its rollout across Samsung devices this month, and is expected to be included as part of the next revision to Samsung Experience - presumed to be Experience version 9.1.

Access to this update will vary by region and carrier, as is the norm with Samsung updates. At the time of writing, some users of Experience 9.0 will be already seeing these changes in newer builds, while others will still see the original 9.0 set.[4]

Are you seeing this latest update as part of Samsung Experience 9.0? Let us know!