Unicode today announced a proposed update which adds support for regional flags[1] such as England, Scotland, Wales[2], or states of the USA.

Above: Flags for England, Scotland, and Wales proposed in July 2016 may soon be possible. Image: Emojipedia.

Labelled as Emoji 5.0, this update to Unicode's emoji documentation provides the functionality required to support these new flag types, but stops short of recommending specific flags for vendors to support.

Regarding which flags vendors should support, Unicode stays neutral on the matter:

There is no requirement that any be supported, and no expectation that more than a small number be commonly supported by vendors.

Any region which has an ISO 3166-2 code would be eligible, such as: 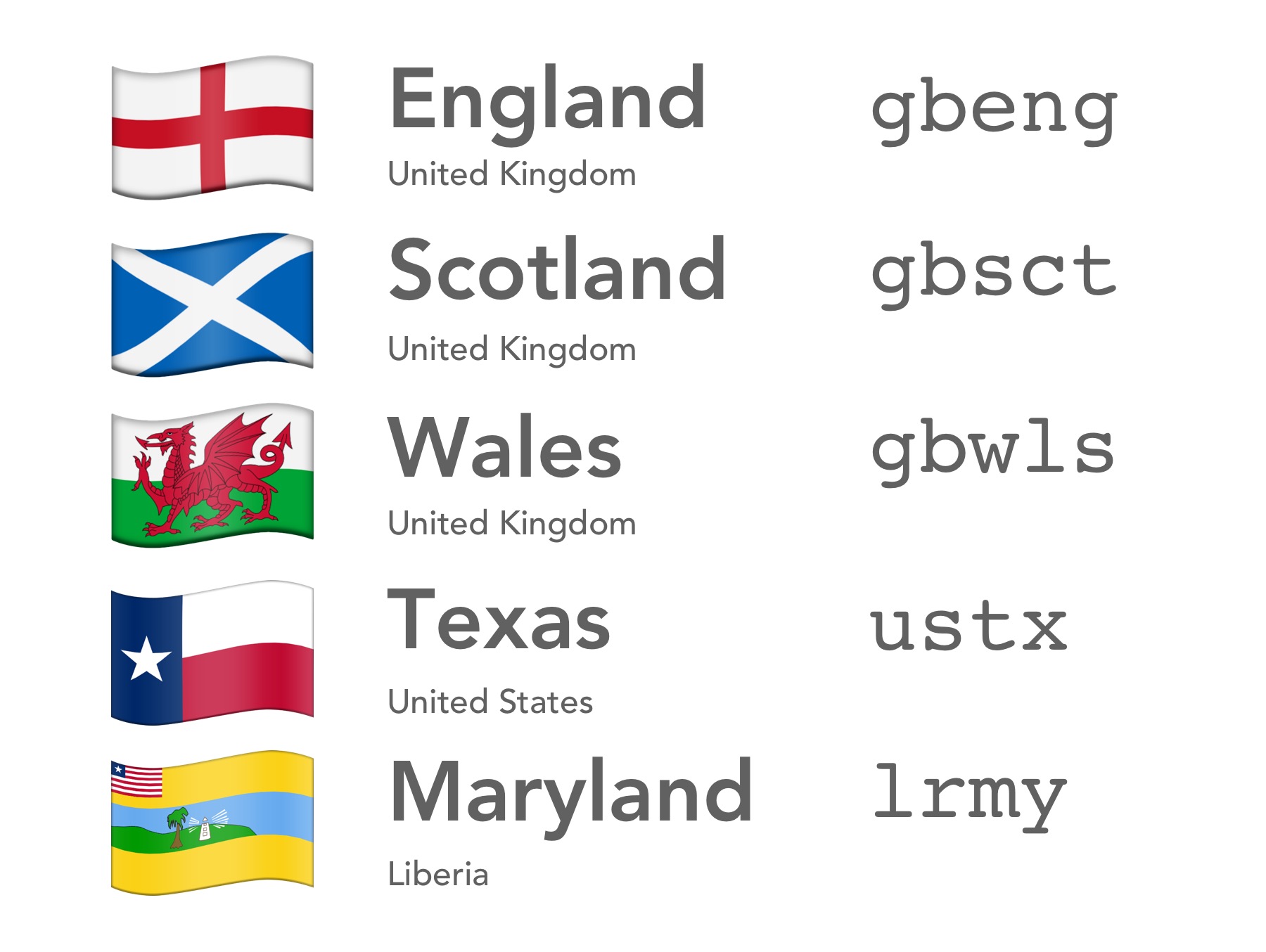 Above: Flags that vendors could choose to support after this update. Image: Emojipedia

While there would be nothing stopping a vendor adding all states of the USA, Canadian Provinces, and Liberian Counties; in practice it's likely a small set would be used — such as the home nations of the UK.

Emojipedia statistics show the most frequently requested regional flags are, in order:

Notable in this discussion is that WhatsApp already supports flags for England, Scotland, and Wales, but using "made up" country codes (such as XE for England, or XS for Scotland) that do not follow Unicode specifications.[3]

While this is not reason alone for Unicode to support these flags, it is an issue of compatibility if a major app is working around the current standards due to no means of doing so in a supported way.

Above: WhatsApp Web works around current Unicode Standards to support flags of England, Scotland, and Wales.

Platforms without an emoji picker (such as Twitter) may choose to support a much wider range of regional flags than other vendors, making these available if users choose to copy and paste.

Other vendors may have to choose their own balance between more flags, and an unwieldy interface if too many are supported.

Above: US State Flag emojis would be permitted, if vendors wished to support them. Image: Emojipedia.

The shorthand version how how these regional flags will work is to combine a country code with a region code, which will output a flag emoji. An example of this would be:

This chart from TR-51 lists possible options, with examples of valid and invalid tag sequences: 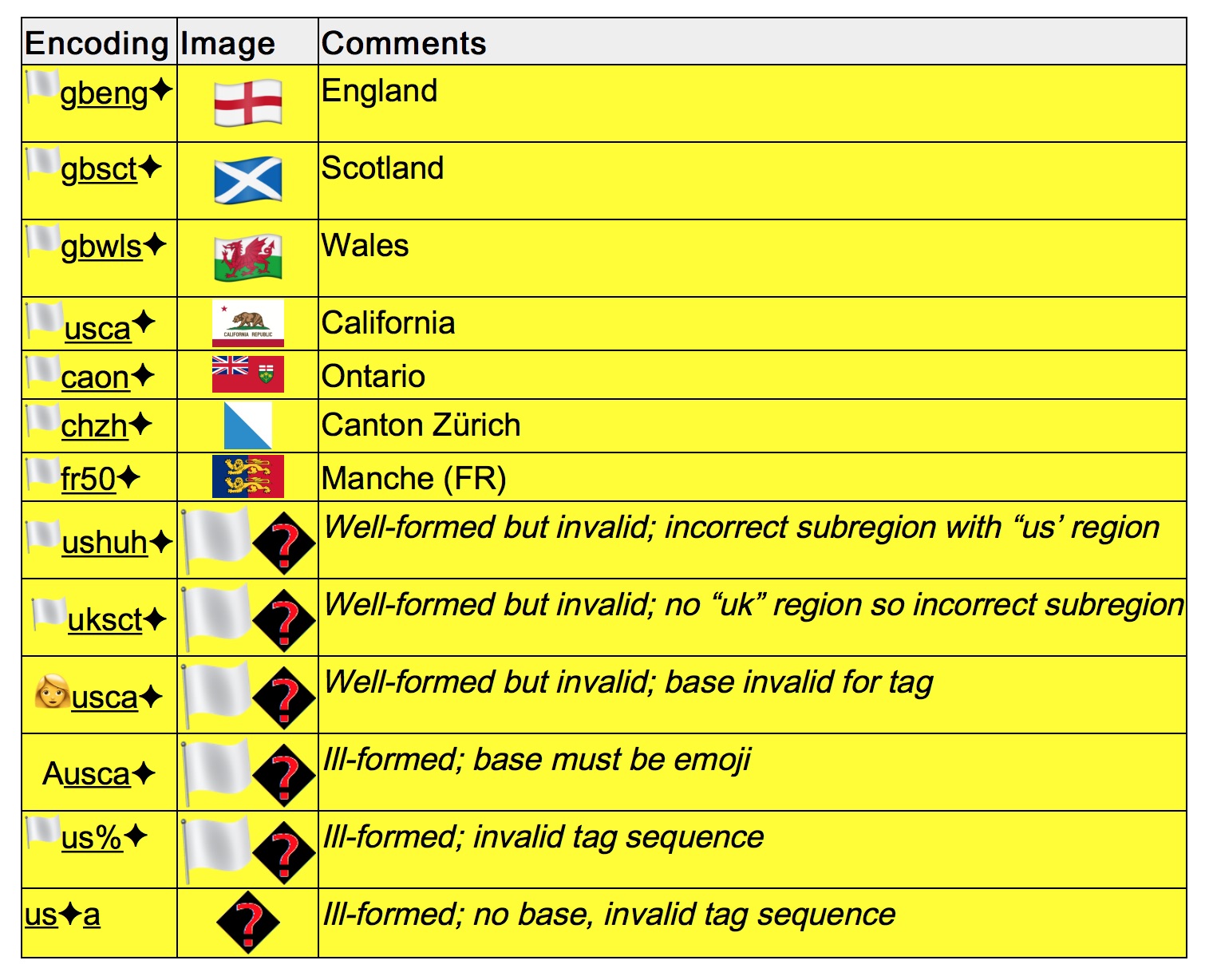 Above: Regional flags would include a 🏳 White Flag emoji + country and region code. Image: Unicode.

For end-users, the details of how these flags are created behind the scenes is of little relevance.

In practice, these emoji flags would all appear on emoji keyboards in the same way as any other flag.[4]

Prior to this proposed update, the most recent proposed regional flag mechanism was known as TERIS, and published in August 2016.

This implementation supercedes work on TERIS, and is the recommended approach from the Unicode Emoji Subcommittee[5]. All implementation details listed within Technical Report #51.

Emoji 5.0 is now available for public review. A release date has not been specified, but is likely to be in the first half of 2017.

If this goes ahead in the current form, the choice will be then over to vendors which regional flags to support. Stay tuned for more on that.