This release (iOS 10.0.1) contains a total of 37 new emojis, or 632 emoji updates in total. This latter figure includes completely new characters as well as redesigned images for existing emojis.

Women, your time has come.

No longer relegated to haircuts, sassiness and pouting, iOS 10 supports women in activities such as running, surfing and swimming.

In addition, female versions of police officer, construction worker and sleuth are also available for the first time. 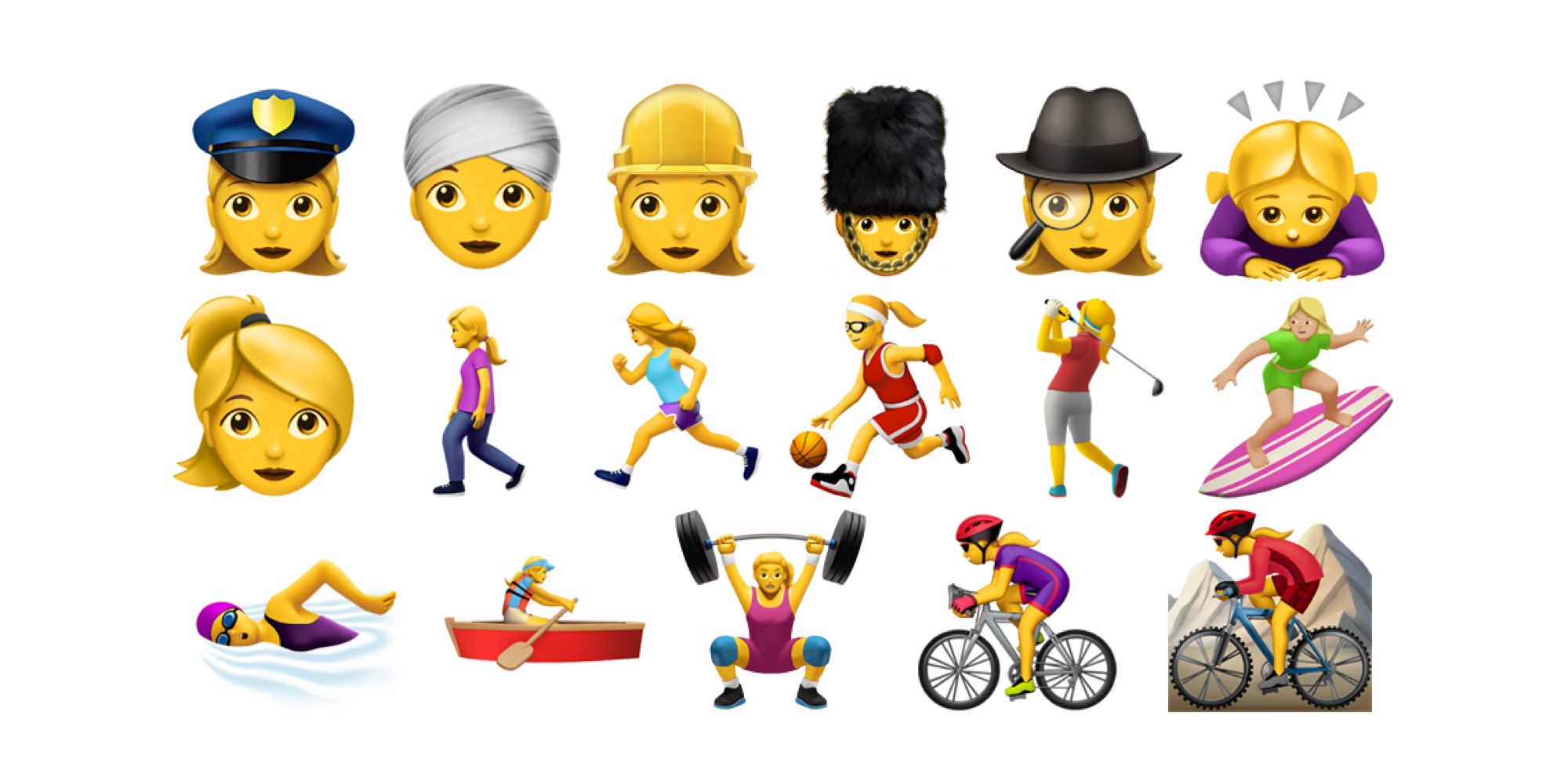 In total there are 17 New Female Emojis in iOS 10:

Every male emoji has a female equivalent in iOS 10, with the exception of 🕴 Man in Business Suit Levitating and 👲 Man With Gua Pi Mao.

Female emojis have been created by the addition of new Emoji ZWJ Sequences which consist of a"base" emoji plus a ♀ Female Sign. When displayed in iOS 10, these sequences appear as unique emojis no different to any other on the keyboard.

The key differences in this implementation are:

Sending, for example, the 🏃‍♀️ Woman Running Emoji to an iOS 9 user, or someone on another platform, looks like this: 🏃♀

Incidentally, at these small sizes it can already be a challenge to determine which version is being sent, regardless of platform.

As with other human emoji characters, each supports modifiers to provide 5 x additional skin tones:

And just like regular emojis, each of these displays on the keyboard with a tap-and-hold. Basically, treat these new Emoji ZWJ Sequences no differently to other emojis. On supported systems, it's near impossible to tell the difference[2]. 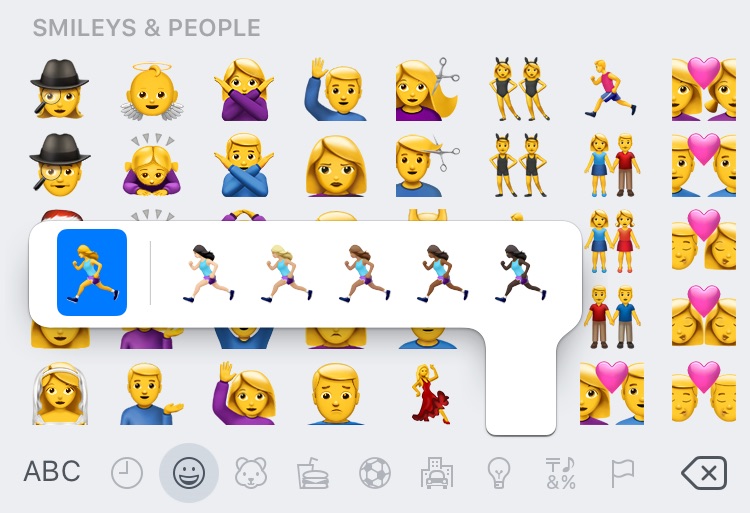 Above: 🏃‍♀️ Woman Running on the emoji keyboard of iOS 10.

This means emojis with a female appearance such as such as 💁 Information Desk Person and 🙋 Happy Person Raising One Hand now have male equivalents. 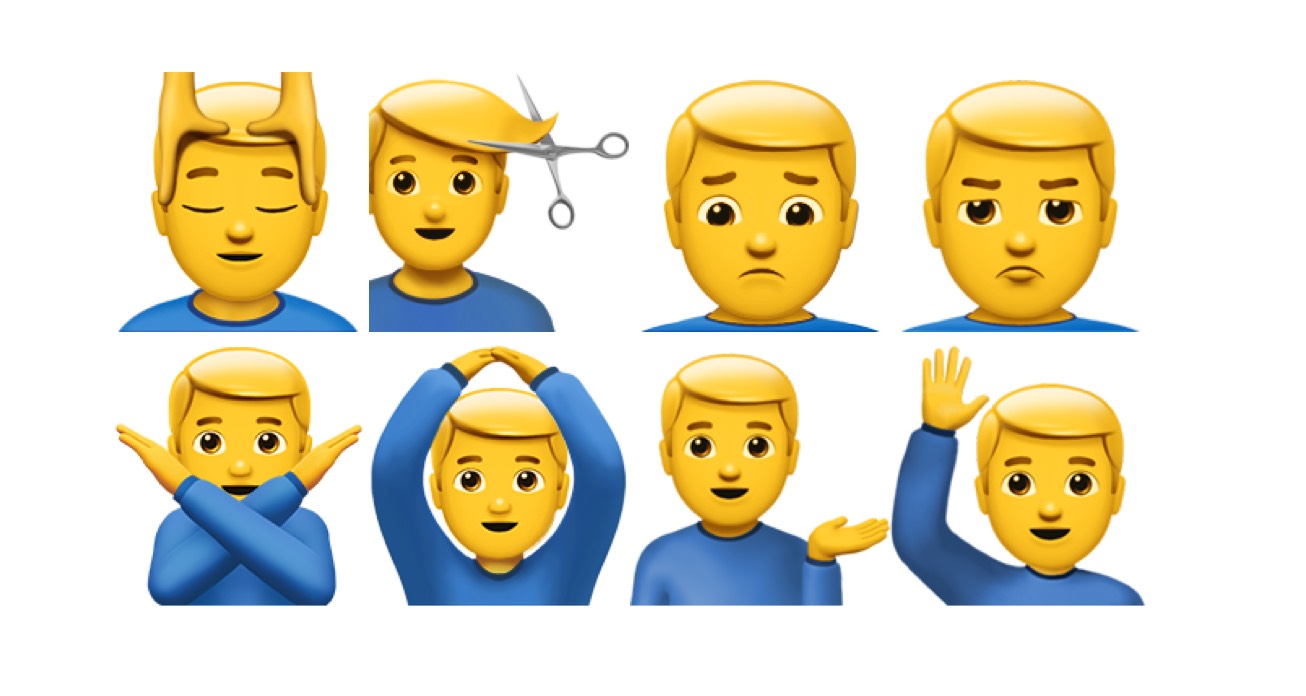 This even goes so far as to include a 👯‍♂️ Men With Bunny Ears emoji[3], which is one of my favorites.

There are nine new male emojis in iOS 10:

The way that female and male emojis are created means that there are now three states for a human emoji:

In iOS 10, the base characters for each human retain the gender-appearance chosen previously. This keeps the additions entirely optional extras, and assists with backward compatibility. 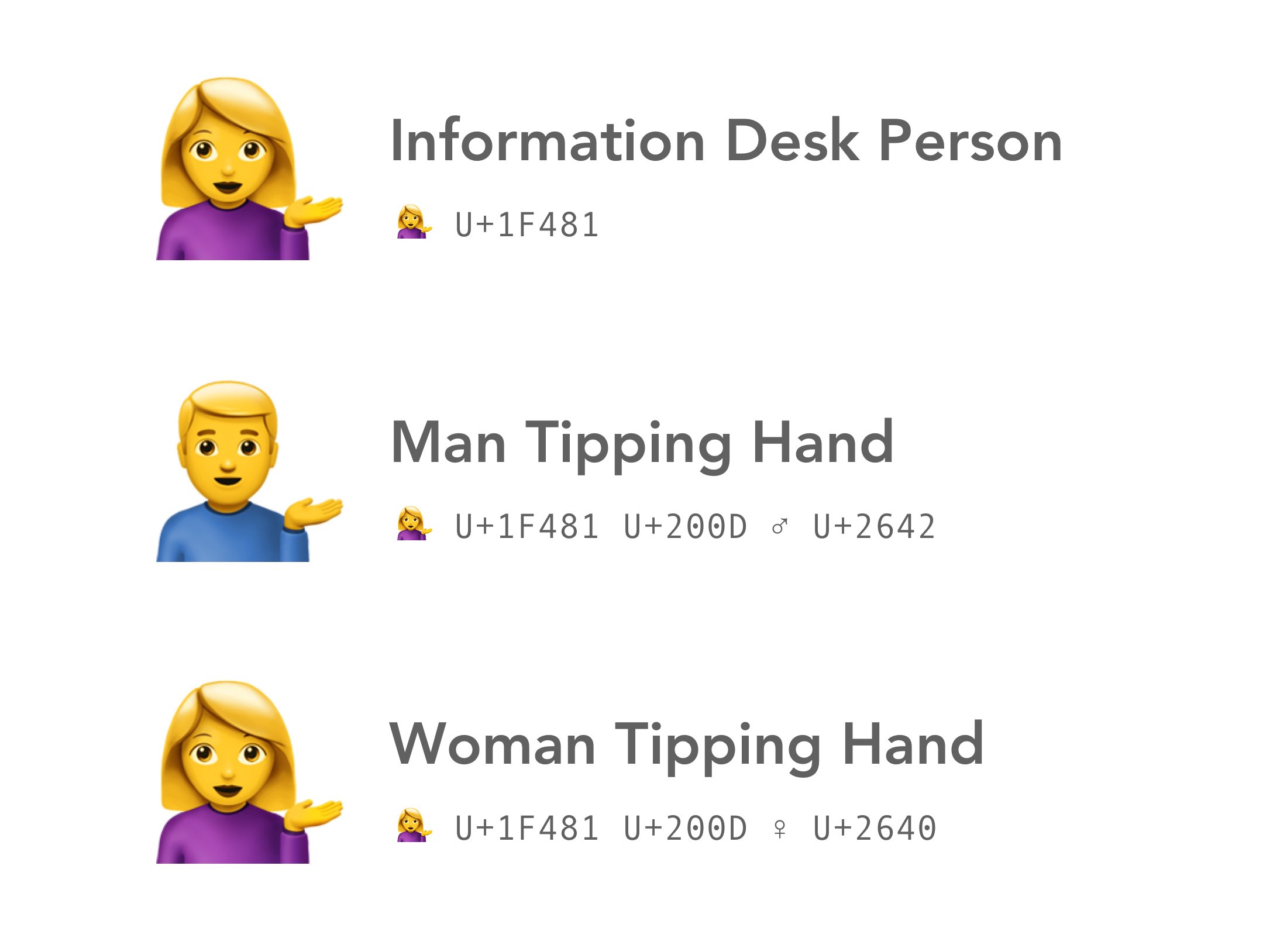 Above: Three states exist for each human emoji in iOS 10, though only two images are used.

Apple could update the base character to have a more gender-neutral appearance in a future release if they wished.

iOS 10 brings new single parent family combinations including one female parent or one male parent, with one or two children.

These new family combinations will be a welcome addition, and are a frequent request.

Rainbow Flag is a new emoji that makes its debut on iOS 10. This comes after it was documented by Unicode in July 2016.

Above: Rainbow Flag Emoji is now supported on iOS.

Hundreds of emojis have had a makeover in iOS 10, with a completely new design that is sharper, more detailed, and less glossy. 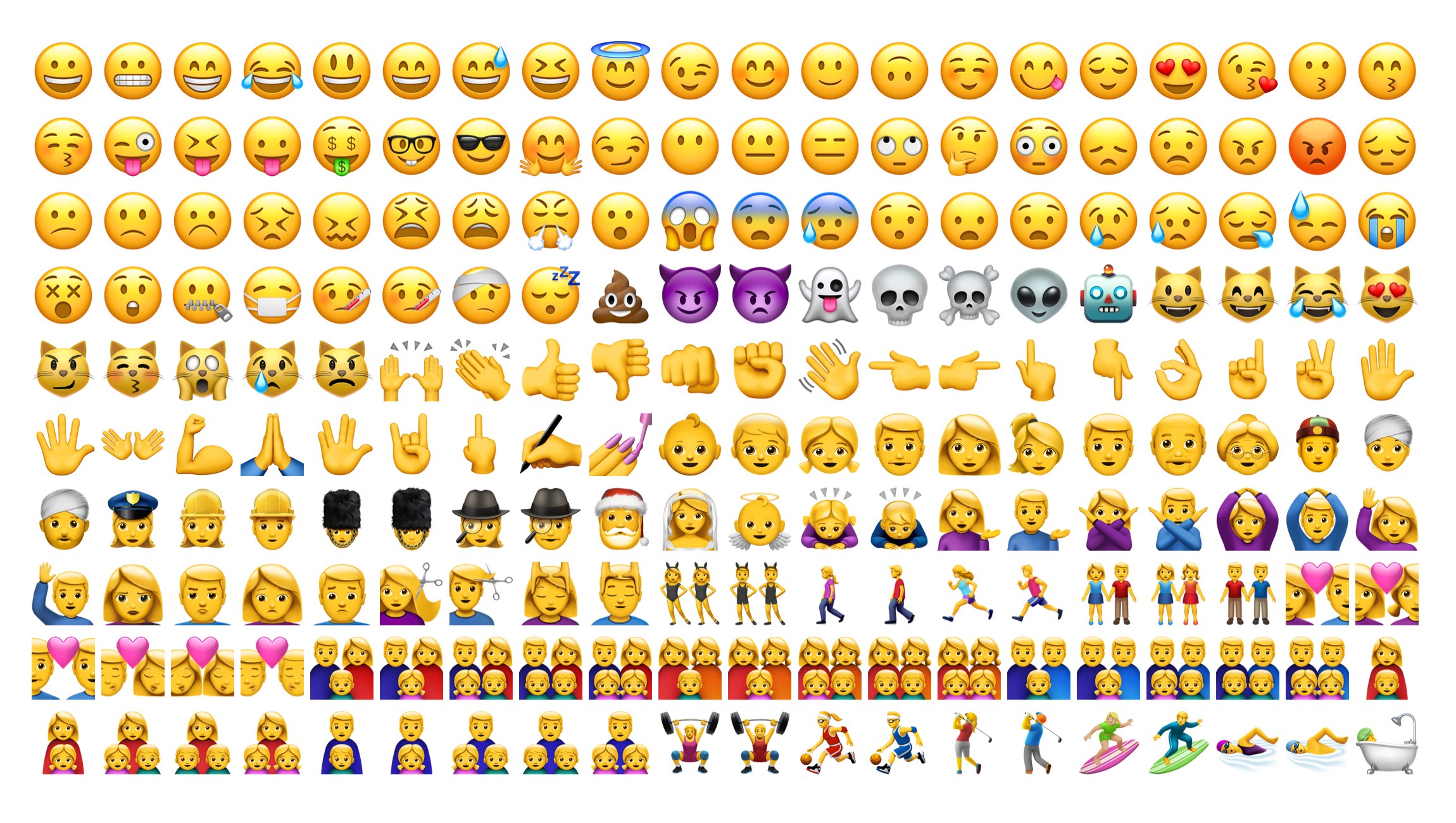 It's refreshing to see the gradual updates to the emoji set in iOS 10.

😈 Smiling Face With Horns is an example where it's clear to see the type of changes included, with the gloss removed from the top, the drop-shadow also removed, and some of the bevel effects around the mouth and eyes gone too: 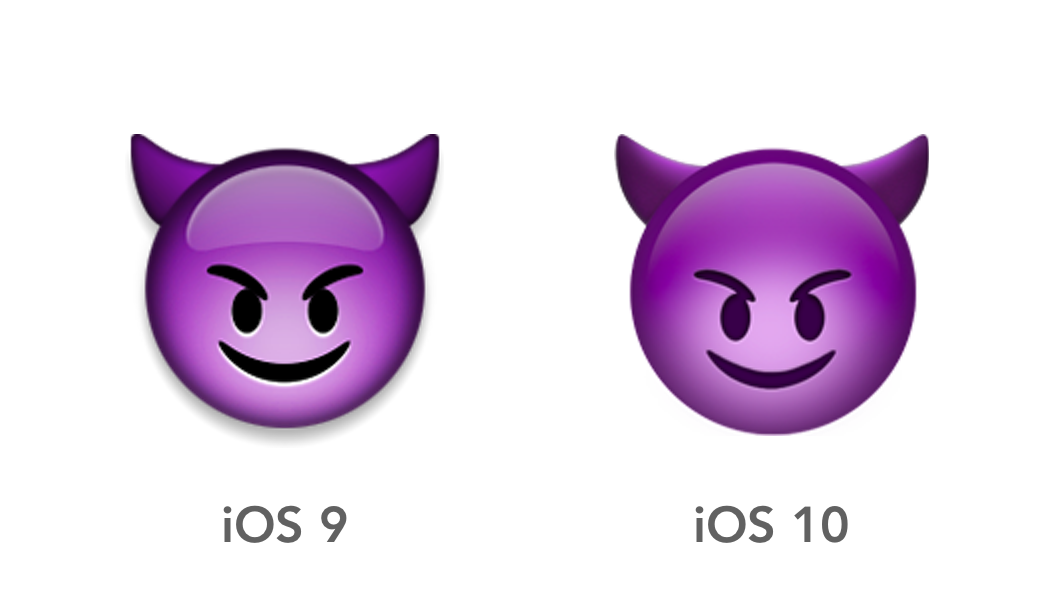 Another good place to see the design changes is in the people, which look great when shown at these larger sizes: 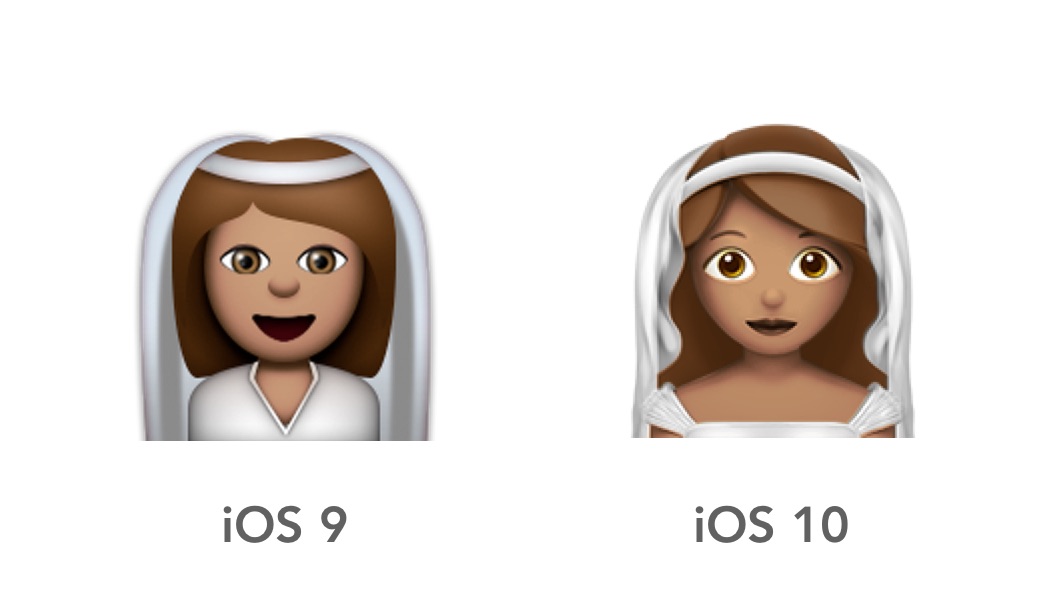 Apple hasn't been known to change the appearance of its emoji characters frequently, but it does happen. The 👯 Woman With Bunny Ears is now on her fourth iOS update:

🔫 Pistol has changed from a realistic weapon into a water pistol / squirt gun[4]: 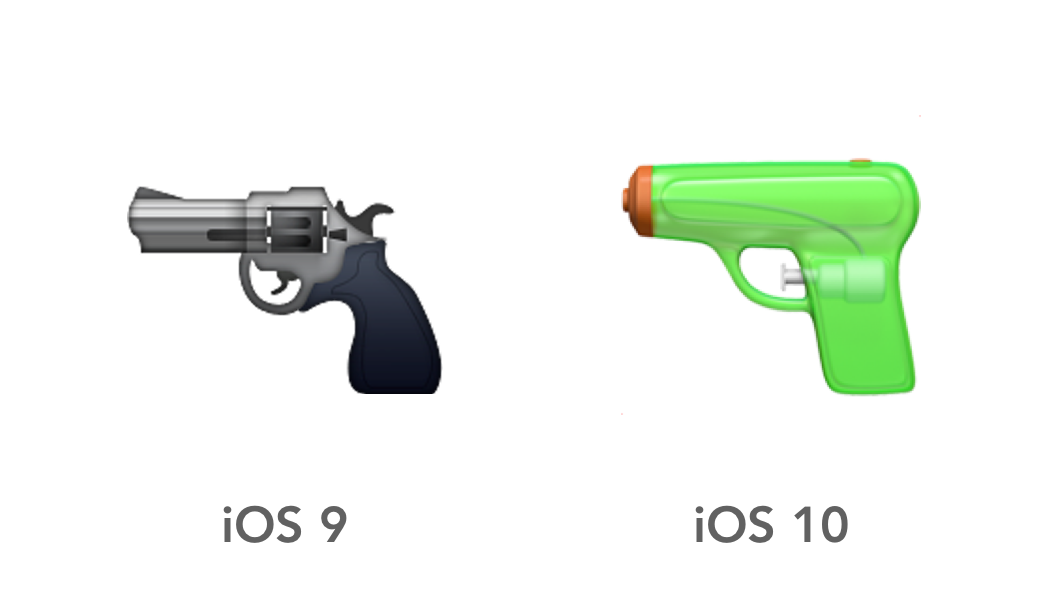 😁 Grinning Face With Smiling Eyes has updated to now show a real smile rather than the quasi-grimacing variation it had previously. Don't worry, 😬 Grimacing Face remains available for those awkward moments). 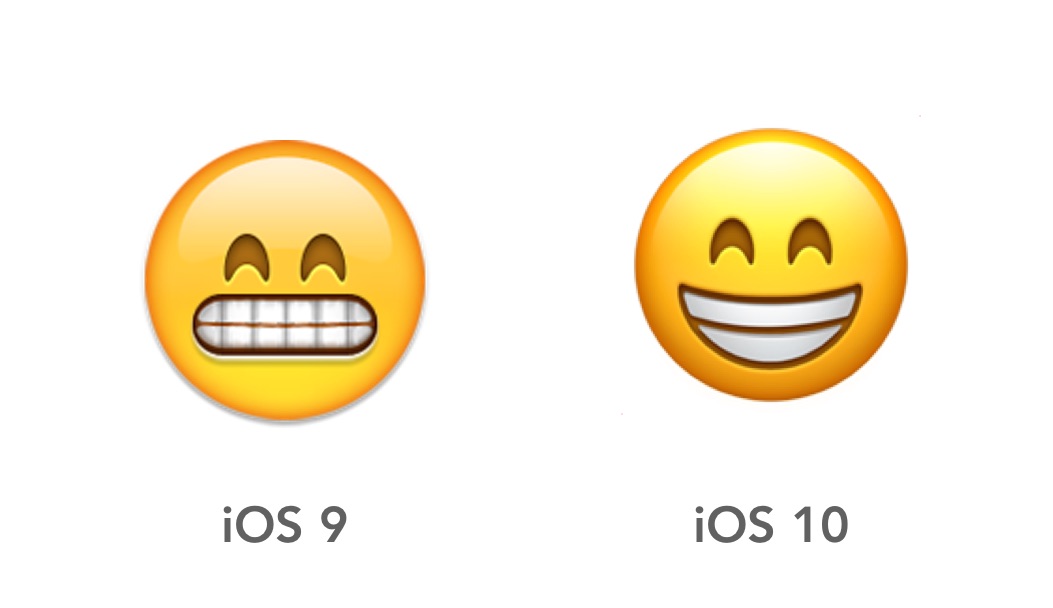 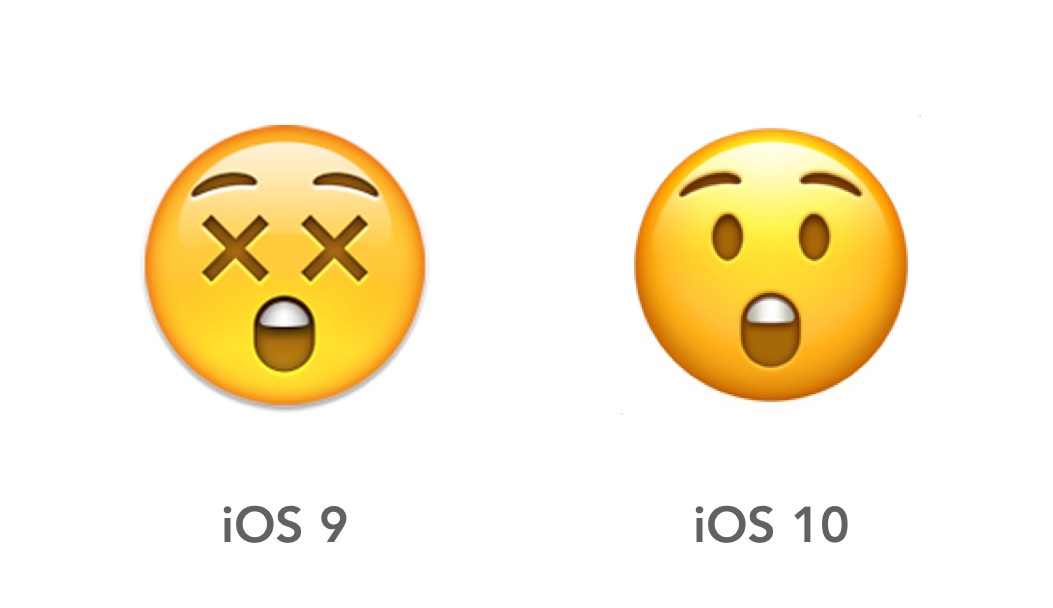 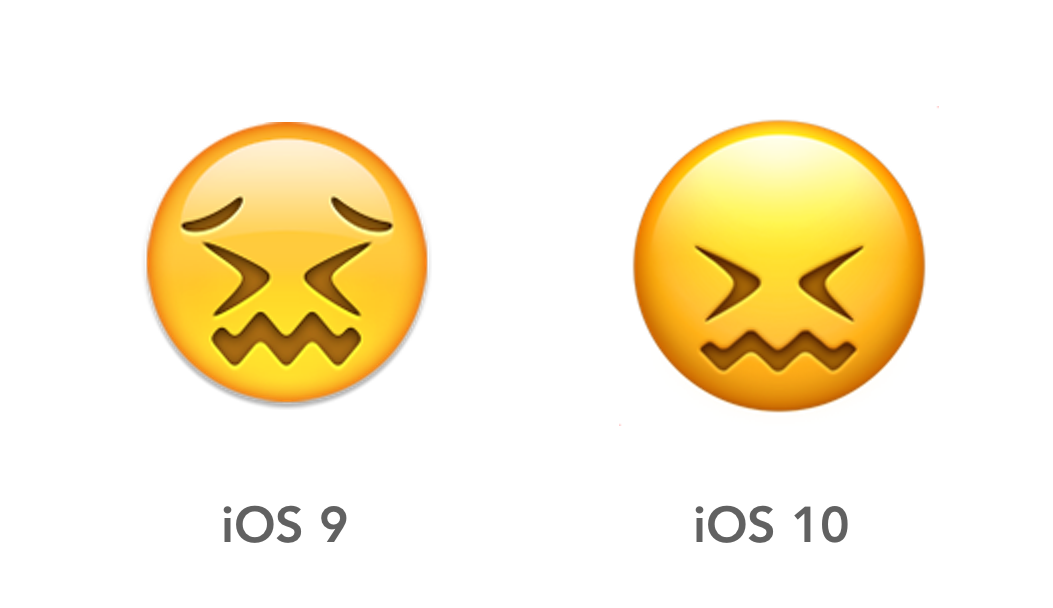 👳 Man With Turban becomes the first[5] iOS emoji to sport a beard. Particularly noticeable when any of the non-default skin tones are used: 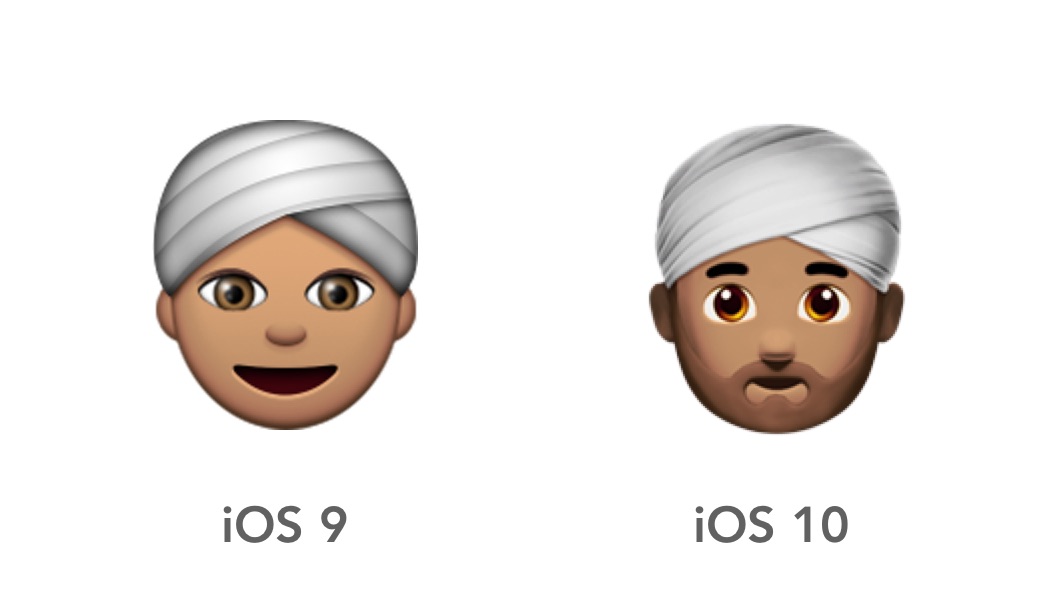 🛁 Bathtub is now filled with bubbles: 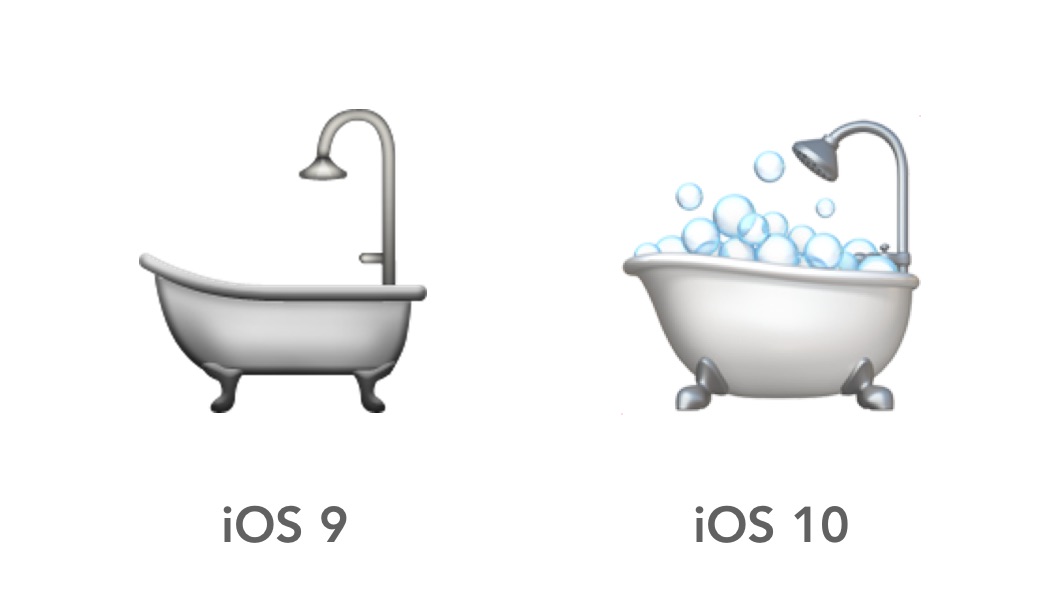 🛀 Bath now provides a shower cap to the person bathing: 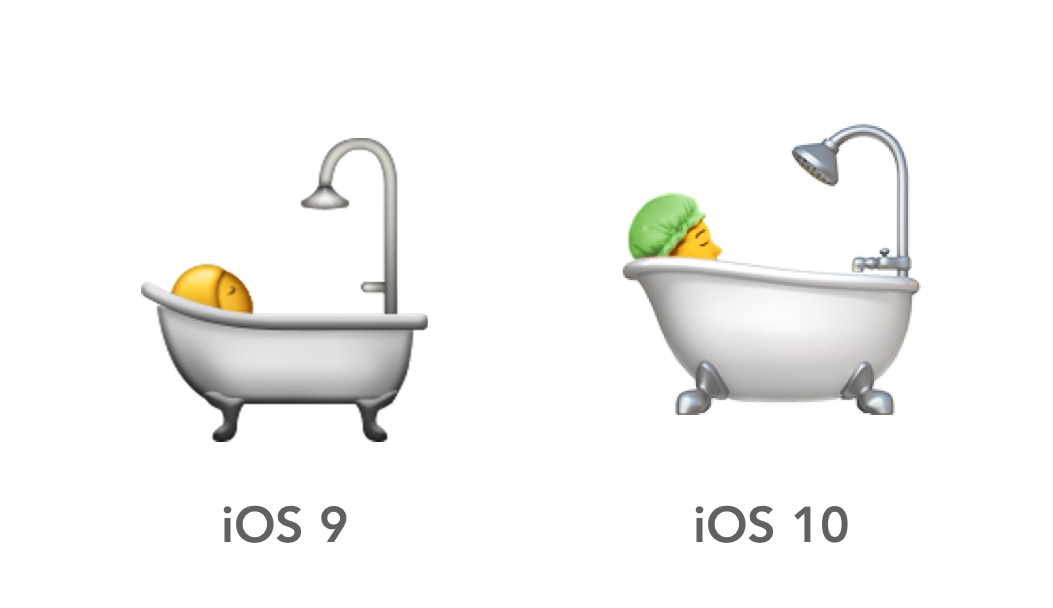 🇷🇪 Flag for Réunion used an unofficial flag proposal in iOS 9. A "more official" (yet still unofficial) flag is shown in iOS 10: 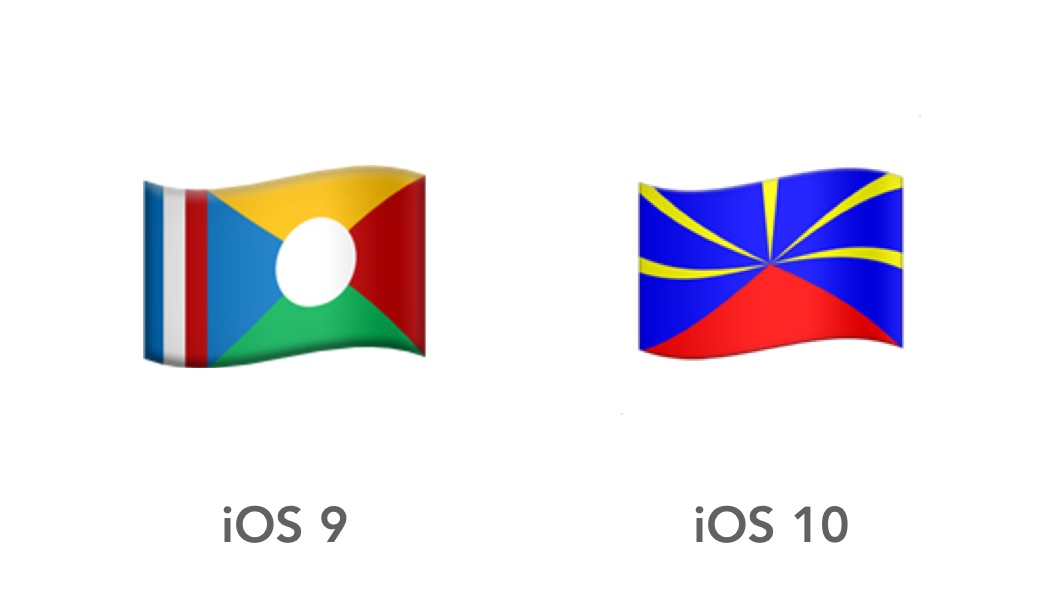 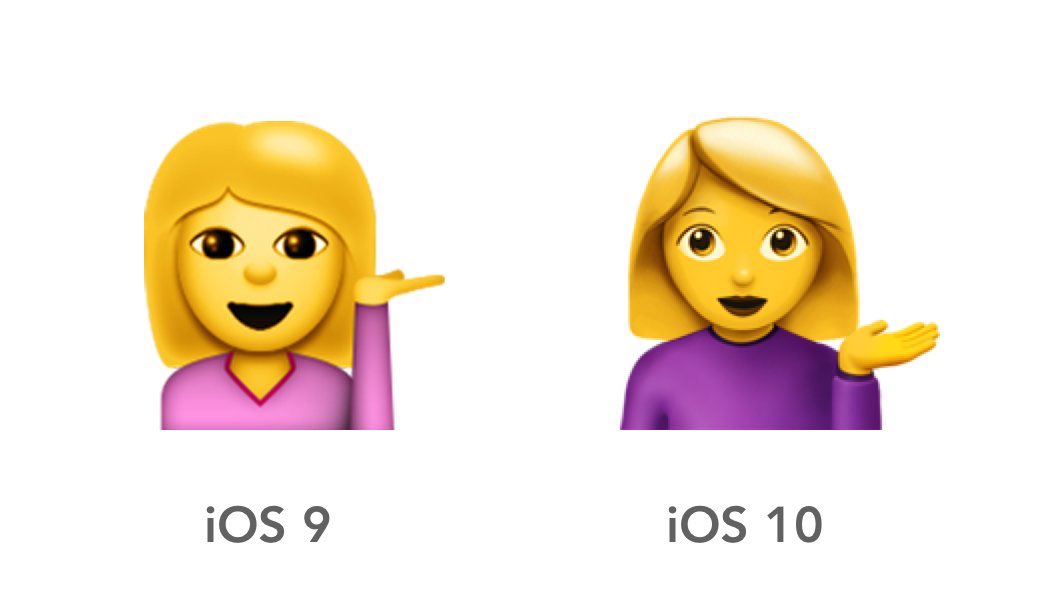 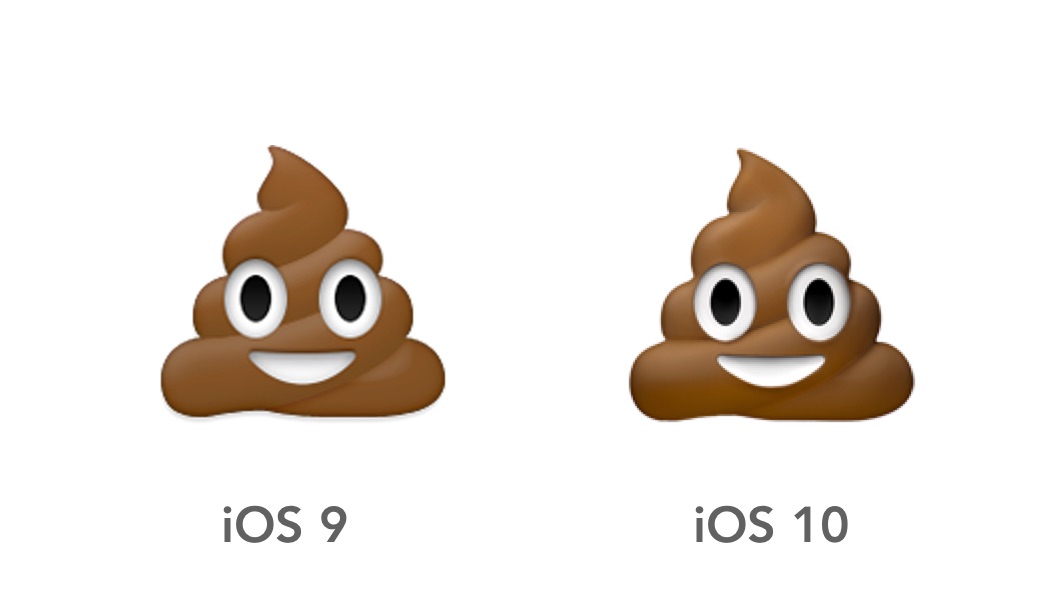 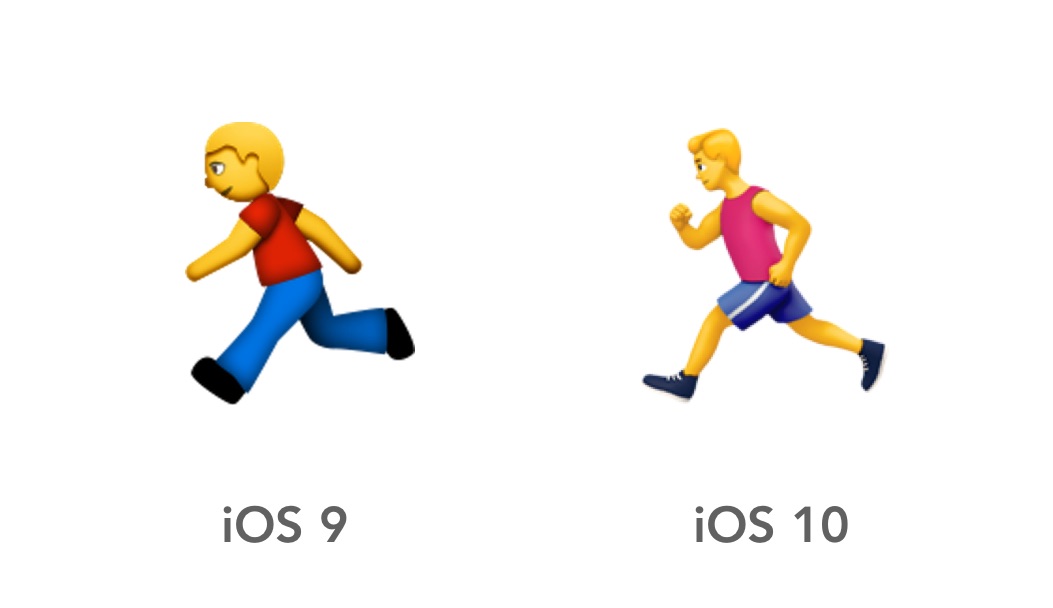 🎅 Father Christmas looks more like his jolly old self and less like one of the other emojis in disguise: 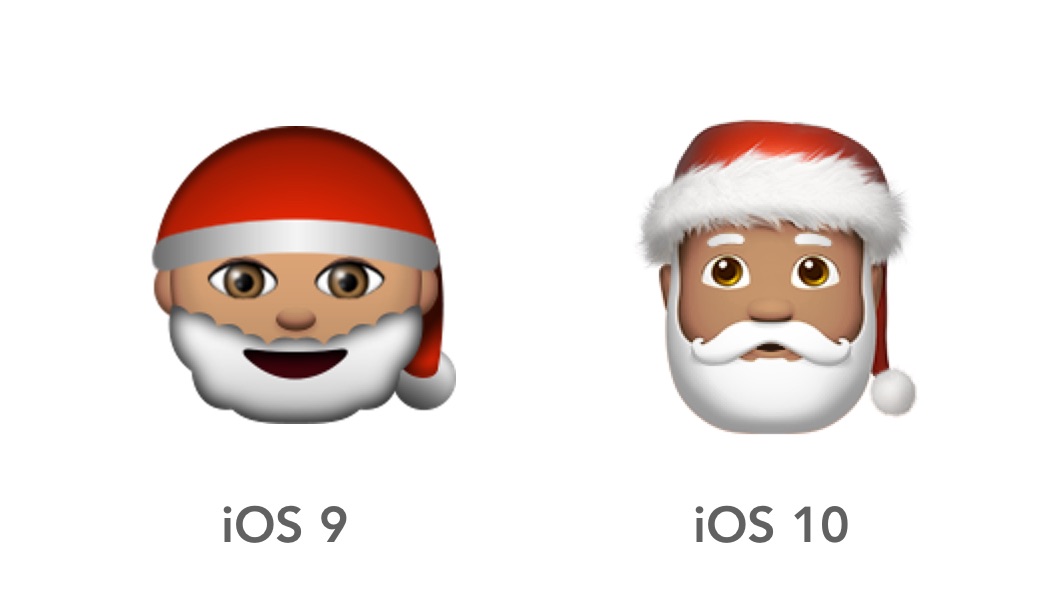 🏌 Golfer was previously showed no skin, which meant no skin tones[6] required. Skin is now shown, but this emoji still has no skin tone support. 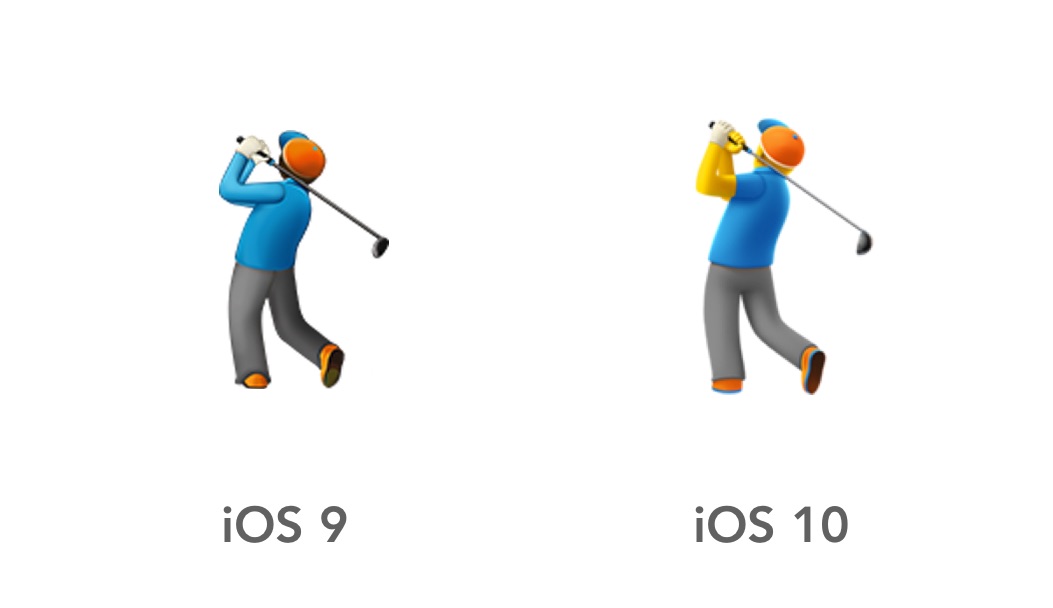 😾 Pouting Cat Face (aka grumpy cat) no longer faces to the right. Joins the other cat faces 🐱😺😸😹😽😻😿😾😼🙀 in facing forward. 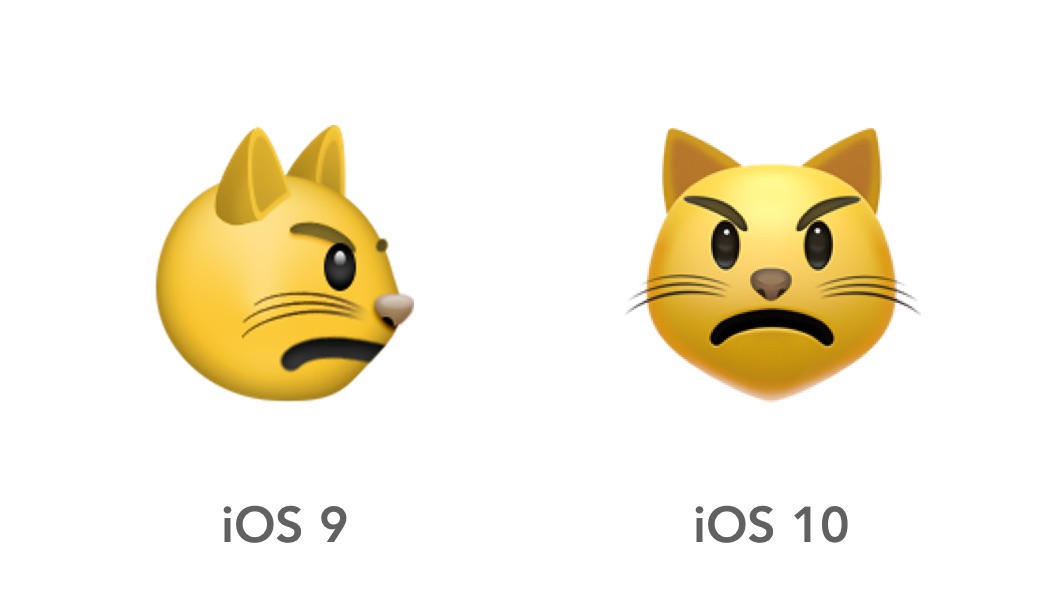 The 72 new emojis approved as part of Unicode 9.0 in June are nowhere to be found in iOS 10.

These include popular additions such as the shrug and face palm, which are now supported on Android and Windows.

I suspect we may see these come about in a point release for iOS later this year. Interestingly, Apple chose to go ahead with part of the draft Emoji 4.0 spec, but not all of it. As such we may also see new emoji professions coming out in an iOS 10.x release, too.

iOS 10 was released on September 13, 2016. All emoji updates listed here were automatically available for those receiving the software update from Apple.

macOS 10.12 Sierra is planned for release later this month, and includes the same emoji updates as iOS 10.

If you're new to iOS emoji updates, here's a look back:

This is the state of play today: 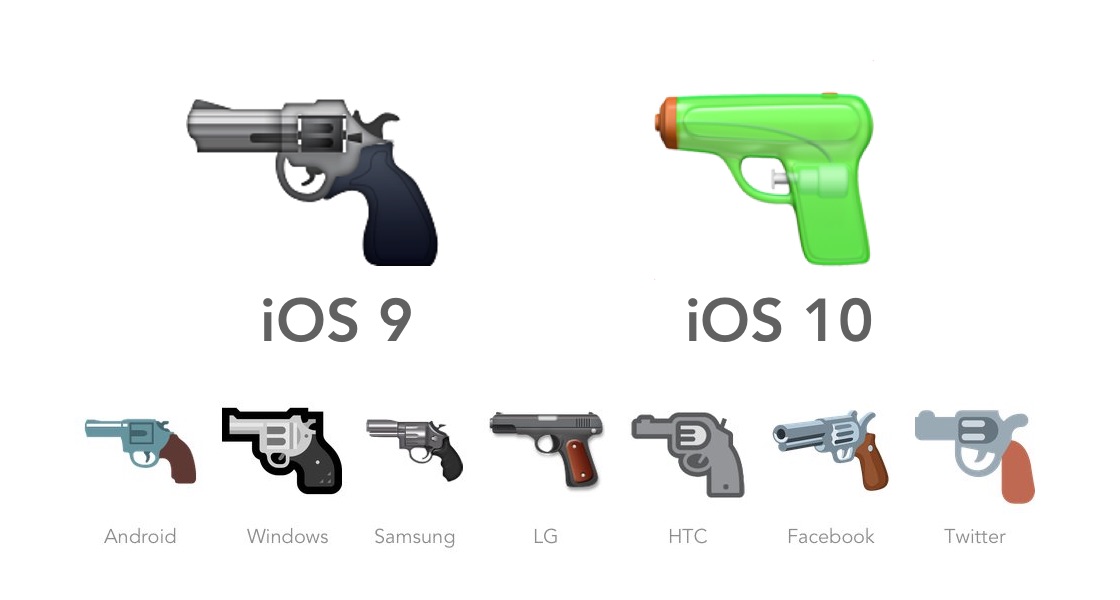