😍 Smiling Face with Heart-Eyes has a winning smile, to be sure, but its popularity may be due to the cross-cultural familiarity of those throbbing peepers. Where do they come from?

The objects of its passion are many and various, ranging from people to possessions, and its tone can be romantic or platonic depending on context.

We’ve been taken with 😍 Smiling Face with Heart-Eyes since 2010, when Unicode 6.0 approved it for use on a variety of modern platforms.

Apple incorporated it as part of its early, limited-release emoji implementation for Japan in 2008, and the original incarnation from Japanese carriers dates back to as early as 1999. 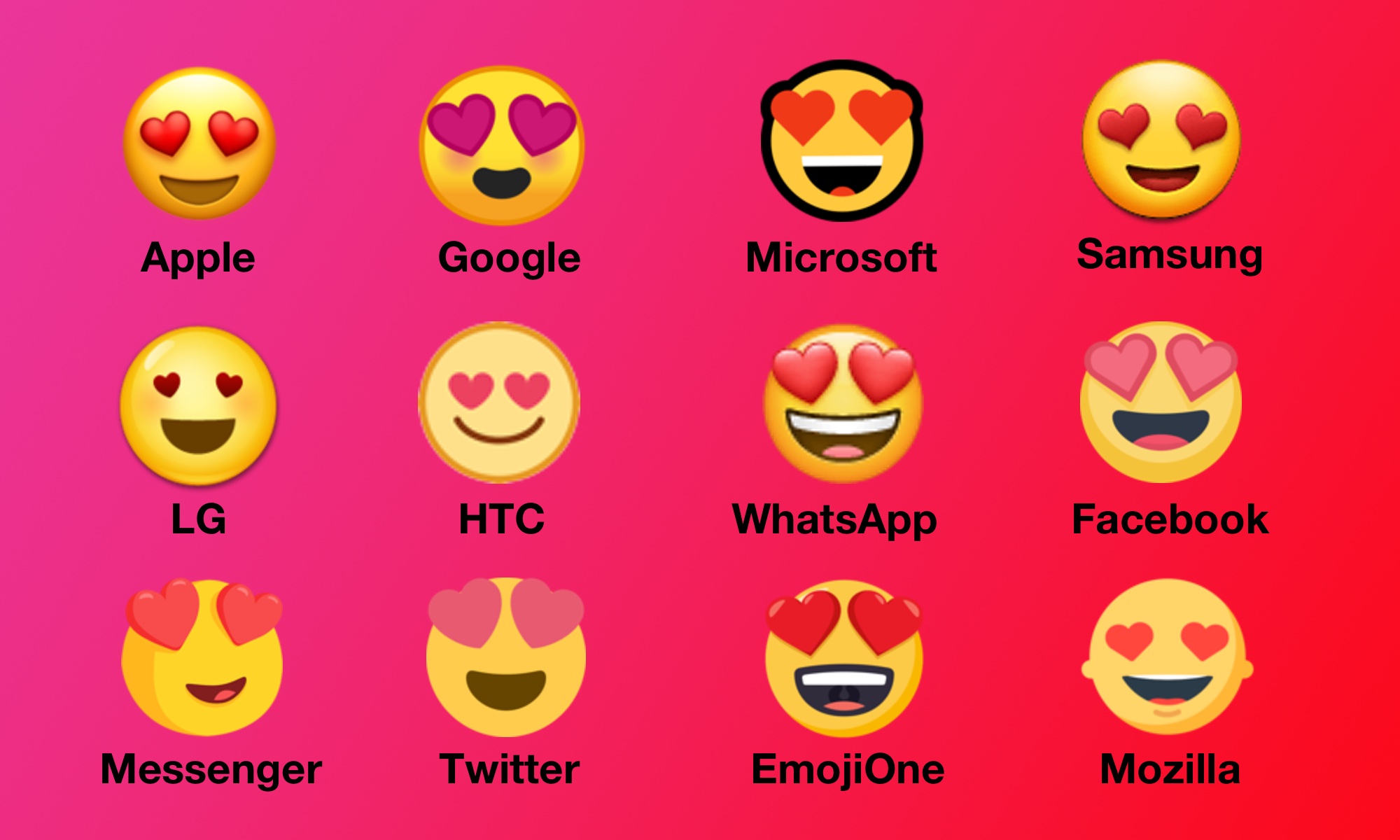 Above: The Heart-Eyes Emoji is very consistent across platforms, mainly varying by teeth and tongue. Only HTC's has a closed mouth.

Across platforms, 😍 Smiling Face with Heart-Eyes has a fairly uniform appearance. Except for HTC, the emoji boasts a full, slack-jawed smile, sometimes flashing teeth and tongue, as we see on Microsoft. And most distinctively, of course, two red or pink hearts burst with love as the emoji’s eyes.

The consistency of 😍 Smiling Face with Heart-Eyes joins a growing convergence of emoji design, particularly noticeable after Google retired its “blobs” and Samsung started hewing to the look of other vendors. 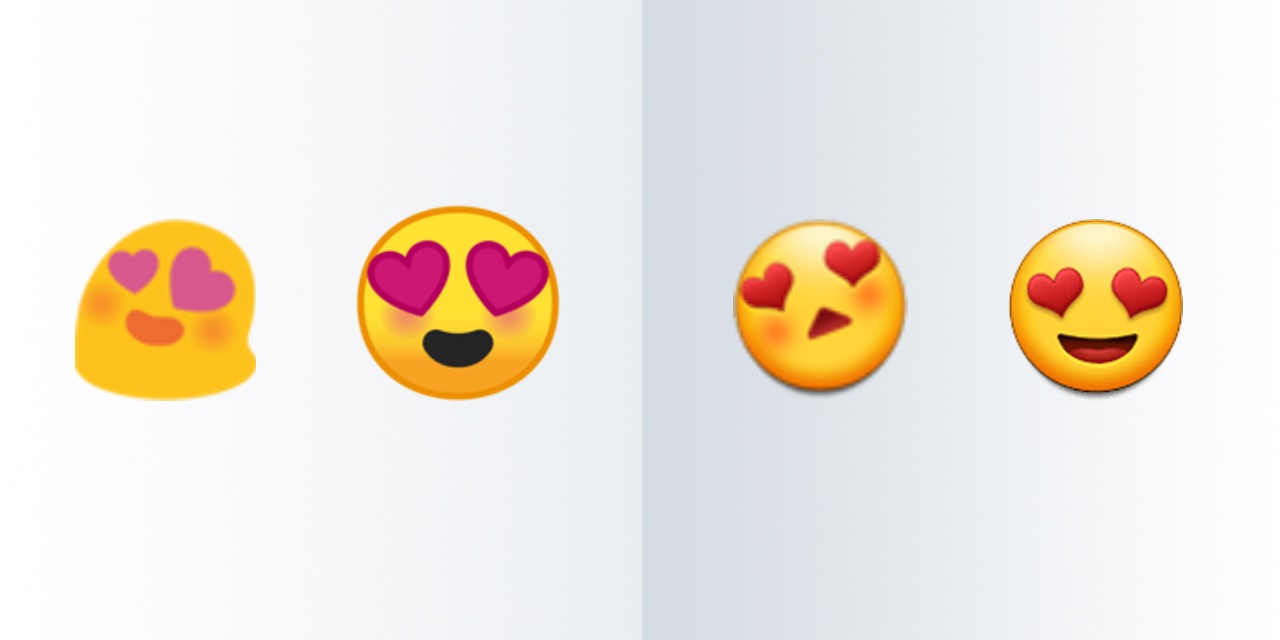 History, though, is instructive here.

Before Samsung Experience 9.0 and under Google Android 4.4 and 5.0, the two tech giants featured 😍 Smiling Face with Heart-Eyes emojis that keeled back, as if literally love-struck. Their design is more dynamic, even more cartoonish—and for good reason. Artists have long inked heart-shaped eyes as a visual shorthand for love in both Western and Japanese comics and animation.

In Western cartoons, we can find classic characters like Donald Duck, Tom Cat, Penelope Pussycat, and Snoopy swooning with hearts for eyes when smitten by a sweetheart. The convention apparently draws on the use of floating, free-form hearts to convey love as well as eyes popping out of a character’s head to portray extreme emotion. More contemporary Western cartoon characters, from the Animaniacs’ Dot to SpongeBob SquarePants, continue the heart-eyes trope while also nodding to its history in cartoons. 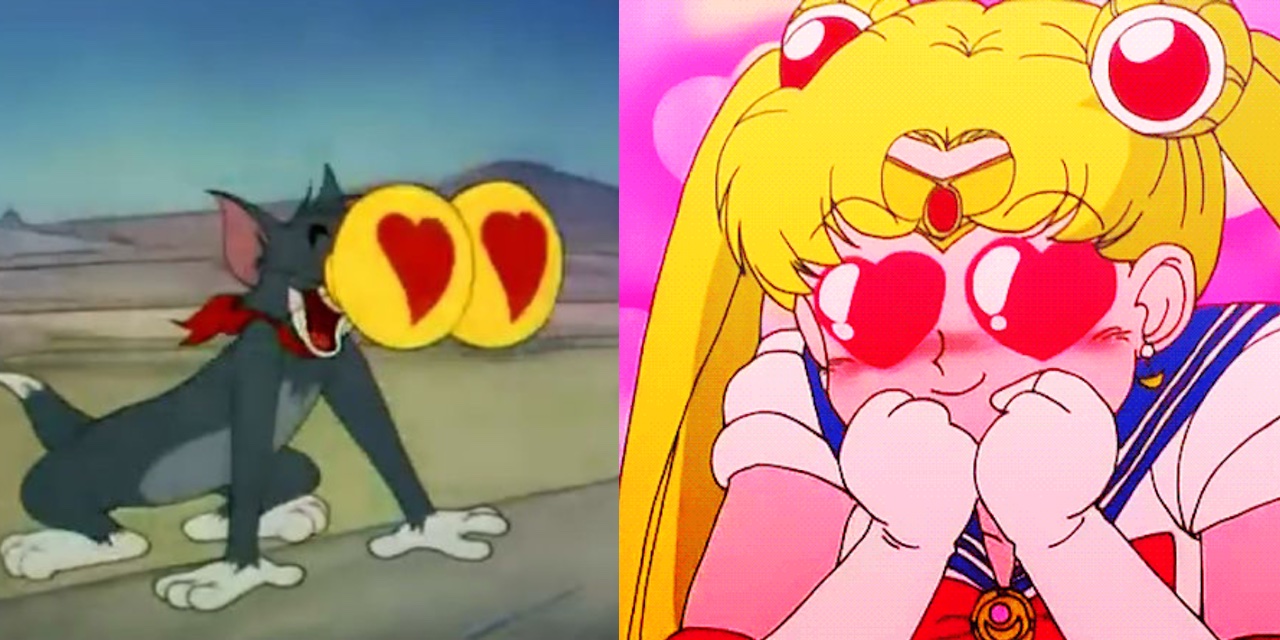 Above: The Heart-Eyes emoji takes its inspiration from cartoons, as seen in Tom Cat from "The Tom & Jerry Show" (left) and beloved anime character Sailor Moon (right).

The Japanese counterparts, manga and anime, use a special system of symbols to depict various emotional and physical states. One is the snot bubble, which supplies the tear-drop shape in the oft-misleading 😪 Sleepy Face, whose emojiology we previously explored. Another includes heart-eyes, representing infatuation or adoration. The eyes of character Sailor Moon, of the series of the same name, notably pulse with plump, pink hearts when she’s enamored. The style of her hearts also evoke kawaii, the Japanese pop-culture phenomenon of “cuteness” that gave us Hello Kitty.

The particular oversized, "gaga" hearts on 😍 Smiling Face with Heart-Eyes bears close resemblance to heart-eyes in manga and anime, as does the exaggerated, gasping mouth. This suggests emoji designers may have been influenced by a more Japanese aesthetic. Unlike with 😪 Sleepy Face, however, Westerners, already familiar with them from their Saturday morning Cartoons or Sunday funnies, needed no education on what heart-eyes signify.

When it comes to using 😍 Smiling Face with Heart-Eyes, we might say it was indeed love at first sight—for East and West alike.

While 😍 Smiling Face with Heart-Eyes may originate in depictions of romantic love, it has proven itself a versatile and go-to emoji, employed as a fun and energetic way to fawn over some object of affection, including:

Quick video as we stopped for a run for Our Miss Brooks at the Dallas City Park before going on errands. #ilovethisplace 😍🌲😍 pic.twitter.com/PAIhKFmdpU

My wife just gets prettier and prettier😍 pic.twitter.com/HT5HLxNMI6

A few of our favorite things

As @shopDisney’s tweet shows, we are increasingly using 😍 Smiling Face with Heart-Eyes not only to mark tone, but also in playful substitution of love words themselves, e.g., “I 😍/am in 😍 this!” or "He/she/they are my 😍!"

😍 Smiling Face with Heart-Eyes might owe much of its success to its mix of two qualities in great demand in our digital age: It’s both personal and exclamatory.

😍 Smiling Face with Heart-Eyes is a like button with an exclamation point.

Because it’s a smiley, 😍 Smiling Face with Heart-Eyes has subjectivity—it has an “I,” it signals there is a person behind the screen. Its bouncy and bubbly hearts, meanwhile, are dramatic, emphatic, and obvious, leaving no room for the ambiguity that ruins many a text or tweet.

Maybe it’s that balance, personal but not too personal, that makes us all so 😍 😍 😍 about 😍 Smiling Face with Heart-Eyes.