You might have scrolled past this emoji—😪—and puzzled about what it means, exactly. Tucked in a column with 🤤 Drooling Face and 😵 Dizzy Face , it's a smiley with closed eyes and a slack jaw. A blue droplet drips from the middle of its face. Is 😪 crying out of its...nose?

What does this emoji even mean? Let's do a little emojiology. 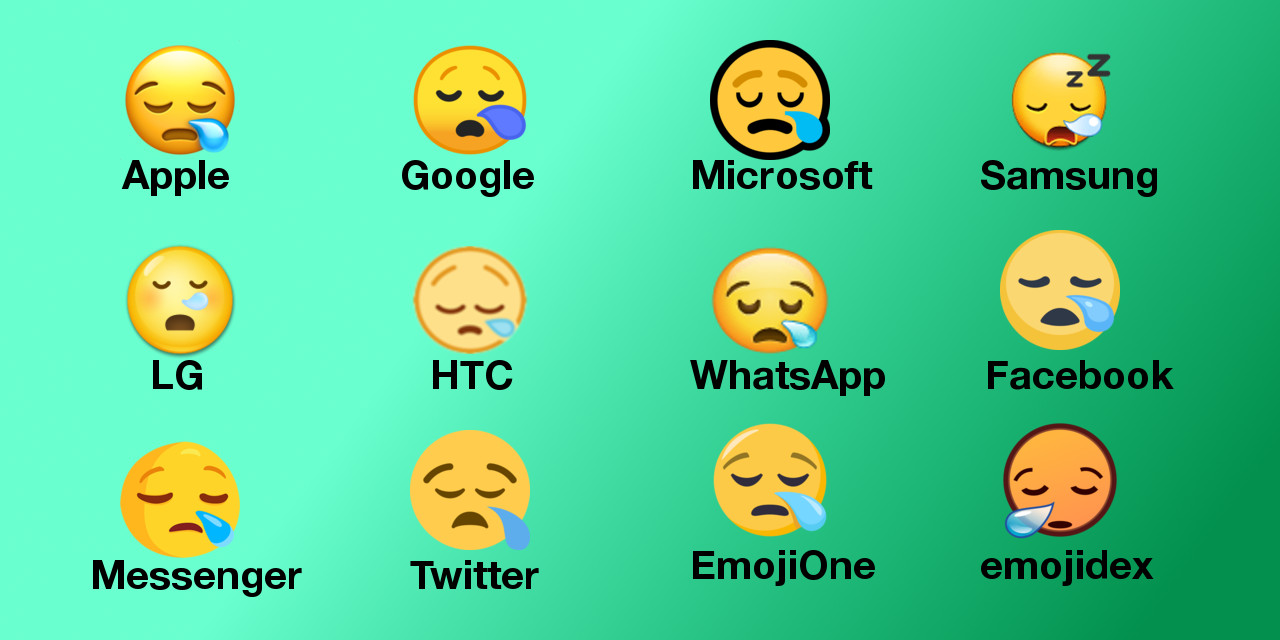 Above: How the Sleepy Face emoji displays across platforms. Note that the only emojidex has the snot bubble facing left.

The 😪 Sleepy Face Emoji is used to convey someone is tired or sleeping. Due to confusion over the meaning of its signature droplet, the emoji also popularly represents sadness or illness.

The Unicode Consortium released 😪 Sleepy Face as part of its 6.0 version in 2010. This was the first release of the Unicode Standard that incorporated the majority of Japan's existing emojis.

As with many of the earliest emojis, it was inspired by Japanese manga and anime, which employ a set of visual shorthands in their comics and cartoons to communicate characters’ various emotional and physical states. One is the snot bubble, which symbolizes that someone is feeling sleepy or has actually fallen asleep.

Artists widely stylize the snot bubble as a light blue, oversized teardrop ballooning out of the side of the nose. Westerners may find this convention more unusual, more accustomed as they may be to head-hovering ZZZs to illustrate snoozing, like 😴 Sleeping Face—which is indeed easily confused with 😪 Sleepy Face.

But the snot bubble is perceived as cute and comedic in manga and anime culture. As the website TV Tropes observes, snot bubbles may, well, bubble up when a character conks out at n incongruous or inopportune time, swelling and shrinking with their breath and popping upon waking.

Above: The "Sleepy Face" emoji, as Samsung's version (shown here) makes clear, comes from the use of snot bubbles to depict sleep in manga and anime, as shown above in One-Punch Man and Akara Azaka from YuruYuri.

Japanese and other East Asian keyboard communicators—not to mention the voluminous fans of manga and anime across the globe—may punctuate their tweets and texts with 😪 Sleepy Face to express sleepiness, often an endearing drowsiness or pleasant, well-deserved rest.

Westerners will make use of 😪 Sleepy Face for tiredness, but its tone often suggests exhaustion or fatigue, frequently due to overwork.

glad school is over for the day and i am almost home. mentally and physically exhausted. just really ready to fall into bed and binge on some criminal minds. 😪😪

Folks unaware of its origins understandably mistake 😪 Sleepy Face's snot bubble for a tear, earning it reference as the "Side-Tear" emoji. A 2015 survey by YouGov found, in fact, that 780 out of 1,000 Americans interpreted 😪 Sleepy Face as “sad” or “crying”—and marking, ironically, the greatest agreement in meaning for all the emojis they polled. So construed, 😪 Sleepy Face is used as a tone marker to express varying degrees of sadness and frustration.

my biggest fear is love being lost 😪

😪 Sleepy Face’s associations with crying means it can represent joyful tears as well:

Other meanings of 😪 Sleepy Face include being literally, figuratively, and slangily "sick,” as the snot bubble conveniently resembles a runny nose. As illness is unpleasant, the emoji might have an overlapping suggestion of "unhappines." “Boredom” is another extended sense of 😪 Sleepy Face, playing on the expressions “bored to sleep” and “bored to tears”—and drawing on the two main meanings of the emoji we've seen.

I always seem to get sick at the worst times.. 🤒😷😪

When emphasizing “sadness,” users often string the emoji with 😢 Crying Face, 😭 Loudly Crying Face, and 😂 Face with Tears of Joy, among other such tearful smileys.

One of the delights of emojis, no doubt, is how creatively we use them, but don't 😪 at the emoji wheel: Misunderstandings can arise with 😪 Sleepy Face due the divergent senses the emoji has developed.