In our Emojiology series so far, we’ve clarified the confusion of 😪 Sleepy Face, reconciled the conflicts of 😭 Loudly Crying Face, and unpacked the complexities of 😏 Smirking Face and 😬 Grimacing Face. But emojis, lest we forget, aren't all trouble and strife. They are fun and playful, too, like this bouncy buckaroo: 🤠.

So, giddy-up! This Emojiology is going out on the range of the 🤠 Cowboy Hat Face emoji.

Depicting a smiley wearing a cowboy hat, 🤠 Cowboy Hat Face marks a wide range of content in country and Western culture, from music and movies to rodeos and ranching to Texas and El Norte. Thanks to the cowboy hat's popular associations with "yee-haw" exuberance and Wild West sheriffs, the emoji can also express whimsy, confidence, or adventure.

Called Face With Cowboy Hat by the Unicode Standard, 🤠 Cowboy Hat Face was approved under Unicode 9.0 in 2016, debuting with other expressive faces such as 🤣 Rolling on the Floor Laughing, 🤢 Nauseated Face, and the equal parts cheeky and creepy 🤡 Clown Face. 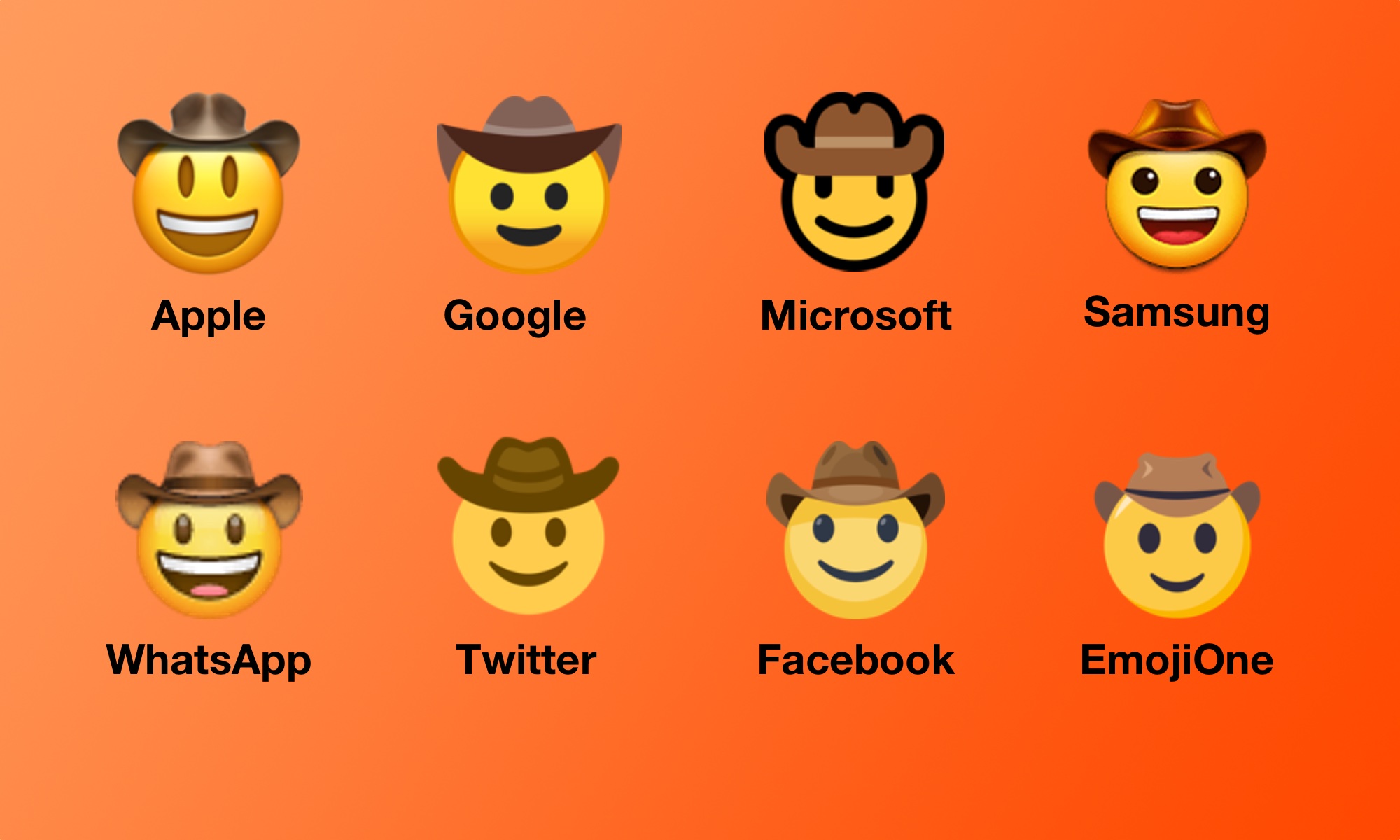 Above: Differences in the Cowboy Hat Face emoji across platforms come down to the style of smile and the hat. Google's hat, for instance, calls up Indiana Jones's fedora.

Across platforms, 🤠 Cowboy Hat Face features a grinning face sporting a high-crowned, wide-brimmed, brown-leather cowboy hat, suggesting the iconic Stetson of the 19th-century American frontier—though, for some, it doubles as the thrill-weathered fedora of Indiana Jones. Several vendors, including Apple, Samsung, and WhatsApp, repurpose for its face their 😃 Grinning Face With Big Eyes. Consistent with other changes in recent years, Google and Samsung have fashioned their 🤠 Cowboy Hat Face to more closely resemble Apple's design, shading the hat from a softer tan to a nuttier brown. 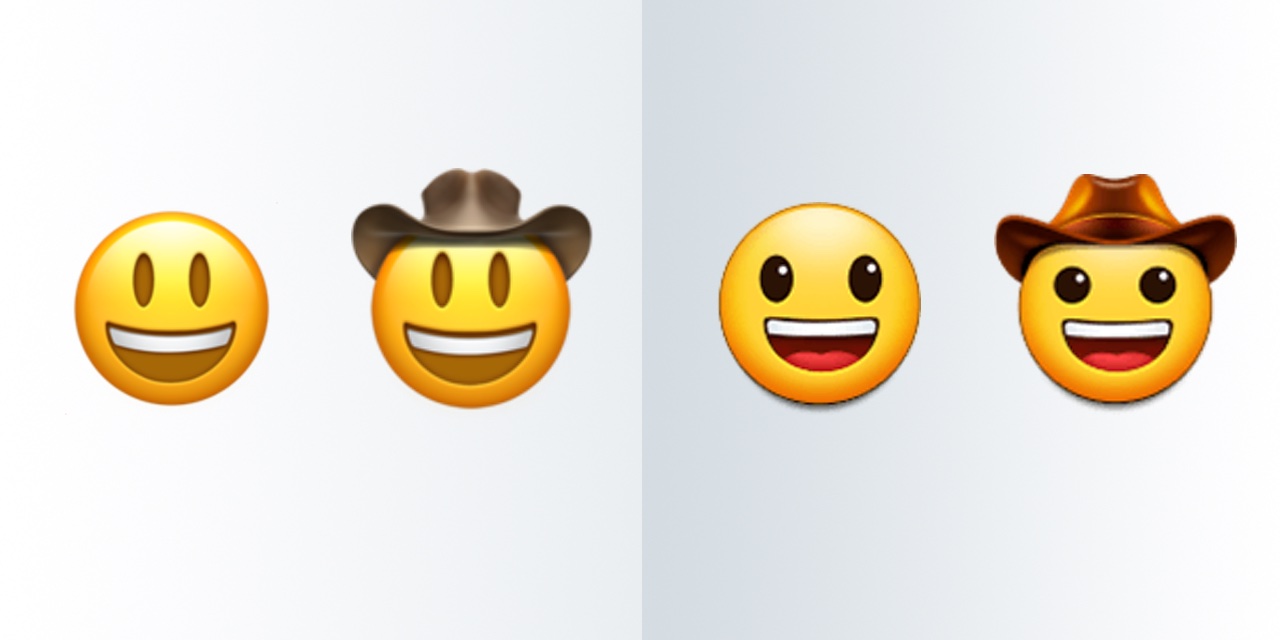 Above: For their Cowboy Hat Face emoji, major vendors like Apple (left) and Samsung (right) have simply put a cowboy hat on their Grinning Face With Big Eyes emoji.

It didn't take long for the root-tootin', sassafrasin', lassoin' 🤠 Cowboy Hat Face to capture the internet's imagination. Two notable memes emerged in summer 2017. The first was Twitter's Emoji Sherriff, the brainchild of comedian Brandon Wardell. In June 2017, Wardell tweet-constructed a sheriff whose head was the 🤠 Cowboy Hat Face, hands were the trigger-ready 👇 Backhand Index Pointing Down, feet were the cowboy boot-esque 👢 Woman's Boot, and whose body was 💯 Hundred Points. He captioned his creation (warning, adult content ahead): "Howdy, I'm the sheriff of sucking you off. im gon suck u off."

Wardell's absurd figure spawned counteless spin-offs on Twitter, with its body and bailiwick swapped out for other emoji. Some takes were just silly, others satirical, and yet others meta, snidely commenting on the state of emojis and memes themselves. That July, the meme even inspired an emoji bot, @emoji_sheriff, which cycles through the full lexicon of emojis for its law-enforcers.

howdy. im the #bancars sheriff. im here to crush your car into a cube.

Like a sad, she-left-me-but-the-bottle-didn't country ballad, the 😔 Penisve Face version especially resonated online. Later in 2017 and early 2018, a few tweeters memorably used the image, by then nicknamed Sad Cowboy Emoji, to make some humourous observations for when you're feeling like you've been knocked out of the saddle.

For all the virality of 🤠 Cowboy Hat Face, though, its greatest success lies in its creativity and personality.

🤠 Cowboy Hat Face sees widespread use, of course, for all things more literally associated with cowboys, from Toby Keith to the Calgary Stampede, but users often stage colorful emoji hoedowns to do so. They paint evocative secnes by pairing 🤠 Cowboy Hat Face with the 🌵 Cactus, 🐎 Horse, 🐄 Cow, 🌽 Ear of Corn, 🔫 Pistol, and 🌇 Sunset emojis, among others.

But, true to its name, 🤠 Cowboy Hat Face all comes down to that hat. Hats are fun. Hats are irreverent. Hats are performative. As costumes, they let us escape ourselves and play at other characters. As symbols, they confer on us authorities – think of the power of a crown. Make that hat a cowboy's ten-gallon top and cap it on a big, eager smile, and the 🤠 Cowboy Hat Face lends itself to all sorts of idiosyncratic expressions, from the goofy cheer of a paint-the-town-red yee-haw to a gritty sort of take-charge, like a lone-star sheriff.

Let's try to herd together, here, some of the many ways people use the 🤠 Cowboy Hat Face.

It turns out 7th July is a good day for country music 🤠🎸🎤 last year we saw @theshiresuk and today me and the children are going to see @Jeannine_Barry and @wardthomasmusic 👍🏻🤠 pic.twitter.com/vYf2trrook

some might say I’m out of my element 🤠👢 pic.twitter.com/yJAQjbevP1

YEE-HAW! 🤠🌵Get ready for the first-ever Edmonton First Responders Rodeo! All proceeds go towards the Zebra Child Protection Centre and TEMA in order to support kids and First Responders in our community. #EFRRA2018 pic.twitter.com/8rGUD6SdoO

So do fans of the western-themed sports teams like the Dallas Cowboys or Oklahoma State University Cowboys and Cowgirls.

So proud of them @dallascowboys! Amazing season! Heads up boys!! #DallasCowboys 🤠🏈

🤠 Cowboy Hat Face has strong regional identity, especially embraced by Texas. But much of cowboy culture is owed to the vaqueros of Northern Mexico, where many people sport the 🤠 Cowboy Hat Face with pride.

Mi vaquero lindo 🤠 😍 getting in touch with his roots #Yaqui #Norteño #guapo pic.twitter.com/uV3OpiuivO

🤠 Cowboy Hat Face also has a national identity, with many at home, and more stereotypically abroad, associating the rugged individualism of the U. S. of A.

Cowboys loom large in the popular imagination, too, especially as romanticized on the screen or stage. Enter 🤠 Cowboy Hat Face.

Oh what a beautiful Prom 🤠🌽🎶 #OklahomaPromhttps://t.co/UZvt25pwdv

Some instances of 🤠 Cowboy Hat Face channel the can-do spirit of the cowboy or its cowboy-hat-donning kin, the Old West sheriff, for when they're feeling tough, empowered, "like a boss."

#InYear2018 I will live like a #boss and #Celebrate every day 🤠 pic.twitter.com/yLhQ3pVxE0

Others channel simply channel the fun of the 🤠 Cowboy Hat Face Face's smile and hat for a little, giddy-up whimsy. Because hats and cowboys!

Mane I’m so happy i released girasoul man. Keep listening to these songs and i get inspired. Next wave is going to be something serious. 🤠🐤🐴 pic.twitter.com/OyNO0fI7qc

Finally, yet others don't see a cowboy 🤠 Cowboy Hat Face at all. They see the whip-slinging archaeologist Indiana Jones, and use 🤠 Cowboy Hat Face to convey a sense of exploration, daring, and adventure—and another dash of whimsy for good measure.

Whatever path you choose this weekend we hope its full of fun & adventure! 🤠#HappyFriday #weekend #weekendfun pic.twitter.com/FBynJKFKuE

As the examples make clear, 🤠 Cowboy Hat Face has quite the range. If you want to add some country flair of Western waggishness to your texts or social media posts, he's your guy. And unlike a semantically moodier 😏 Smirking Face or 😬 Grimacing Face, we might say 🤠 Cowboy Hat Face is a pretty, er, straight shooter. 🤠🐎🌇