You know something’s up when the dictionary is at a loss for words. “We’re gonna be honest with you,” an article on Dictionary.com admits. “Even the dictionary can have a hard time putting things into words 😬.”

What tongue-tied the dictionary? 😬.

That little teeth-clencher, officially known as 😬 Grimacing Face, hasn’t just stumped lexicographers. It’s also challenged its coders and designers and plenty of texters and tweeters, too—it’s really tricky, it turns out, to capture the complexities of facial expressions in emojis.

But relax your jaw. We have some fresh emojiology to help you figure it out.

😬 Grimacing Face conveys a wide range of moderately negative emotions, including disapproval, discomfort, and disgust. It especially communicates tense feelings, including nervousness, embarrassment, ambivalence, and awkwardness, including on Snapchat, where the emoji displays next to a friend who sends the most messages to the same person you do.

Because its toothy mouth can resemble a grin from a distance, 😬 Grimacing Face is occasionally used to show—or confused for—excitement, laughter, or happiness.

Debuting under Unicode 6.1 in 2012, 😬 Grimacing Face is all about the mouth. Across platforms, the emoji depicts a yellow face with a rounded mouth baring gritted teeth. It’s the emoji embodiment of that cheek-stretching contortion of the countenance we call a grimace—hence its name, though sometimes 😬 answers to Awkward, Eek, Foot in Mouth, or Nervous emoji. 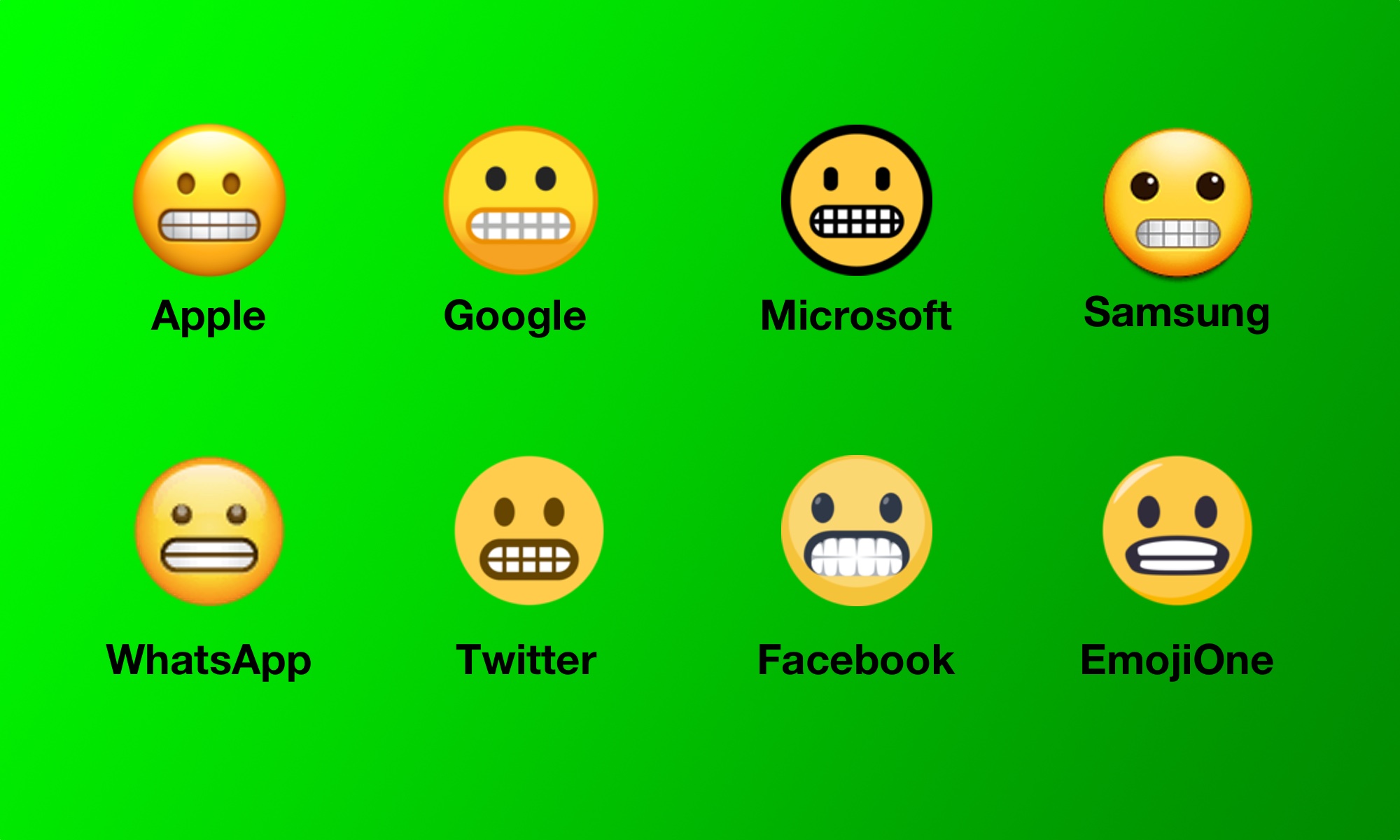 Above: As we've seen with Smiling Face With Heart-Eyes and Loudly Crying Face, the look of Grimacing Face emoji is converging across major platforms.

Most platforms, including Apple, Samsung, Facebook, and Twitter, outline the individual teeth of 😬 Grimacing Face, which emphasizes that they are clenched. EmojiOne and WhatsApp leave out that detail but still illustrate both rows of teeth pressed together. Either way, the emoji’s mouth helps make its small, dot-like eyes look pinched, pained, or peeved.

Outside its name, the visual intent of Apple's 😁 Beaming Face with Smiling Eyes just wasn’t clear. 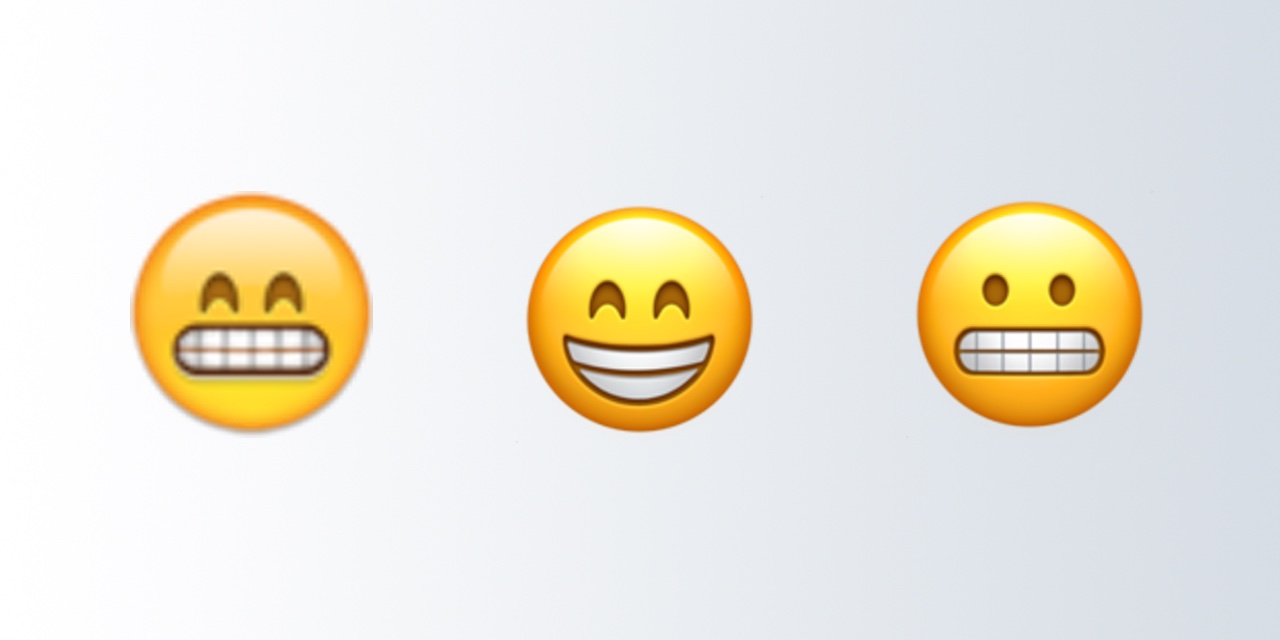 Wisely, Apple repurposed that mouth for 😬 Grimacing Face. With its release of iOS 10.0 in September 2016, it gave 😁 Beaming Face with Smiling Eyes a makeover, turning up its smile and smoothing out its teeth to make it look happier than its oft-conflated keyboard companion.

Other vendors, meanwhile, struggled to get early iterations of their 😬 Grimacing Face just right. On Android 4.4 and 5.0 between 2013–15, Google’s expression seemed to be scowling or glowering. On Windows 8.0–10.0 between 2012–16, Microsoft’s grimace looked more distressed or even whiney. And it’s hard to say just what Samsung was going for up to 2018, as its 😬 Grimacing Face appeared to be sucking on some sour candy. But, as part of a larger 2018 trend of emoji convergence, all three vendors brought their 😬 Grimacing Face in line with Apple’s round-lipped, lattice-toothed, dot-eyed expression. 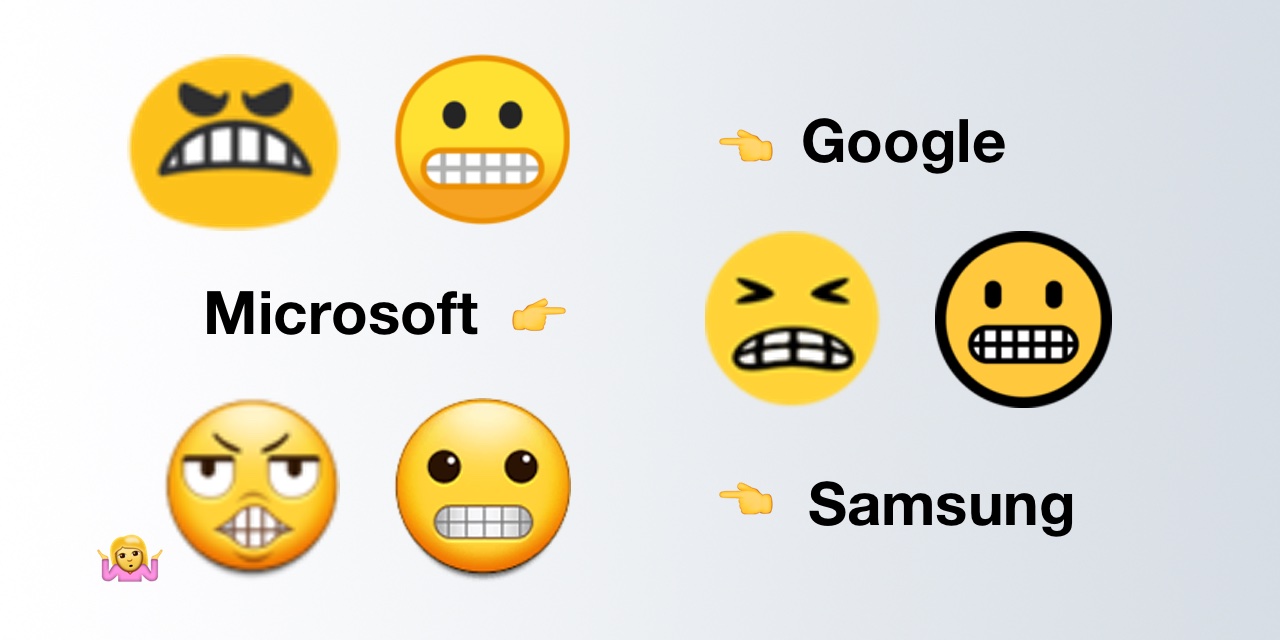 But let's not lose sight of the big picture here. Over the course of hundreds of thousands of years, we humans developed astonishingly sophisticated abilities to form and interpret facial expressions that communicate subtle but distinct emotions. And think just how good—how instantaneously—we can read meaning from faces in the flesh. The task of replicating those facial expressions in code, like with 😬 Grimacing Face, can make one veritably 😬.

So, what do we read in 😬? A whole lot of feels. Enough, in fact, to put those meaning-mavens at Dictionary.com to work trying to cover them all. Let’s sample some here.

😬 Grimacing Face can wince at another’s mistake or misfortune:

Or, embarrassed, cringe at our own:

Uh I think I just hurt my friends feelings 😬😬

Oops! 😬 only I could forget that guys were coming over to look at the roof. When I go outside to look at garden in only a t-shirt on. 😁

The 😬 Grimacing Face can issue a grossed-out “Yikes!” or “Bleh!”:

Don’t let the eyes fool you, he’s got a chops full of needles which he loves to test out on; feet, toes, hands, chins, hair etc etc #ouch #carpetshark #lovehimreally 💙🦈😬🐾🐾 pic.twitter.com/yleXxWN6pz

Or shout a disbelieving “Oh my!” or discomfited “Oh no!”:

oh no,,ive ruined the neighbours plants ive had them for 2 days!! i have 2 more to spruce them back !!😬🌼🌺 pic.twitter.com/zArRzBldJW

But 😬 Grimacing Face isn’t all about uneasiness. Because of its toothy grin, it can also squeal an elated “Eee!” or exclaim a cheerful “Smile for the camera!”:

Not sure exactly how you’re feeling? Nervous but also excited? 😬 Grimacing Face is perfect for communicating those mixed feelings:

I just put an offer in on a house😬😬 never been this happy and stressed at the same time.

That’s a lot of feels, indeed. But that’s a good thing, if you’ll remember from the emojiology we did on 😭 Loudly Crying Face.

Emoji, like the words, gestures, and objects they were created to represent, can and do have more than one meaning—they’re polysemous, to get all dictionary about it. And like grimaces in real life, 😬 Grimacing Face is versatile, though, as we've seen, most commonly grounded in some sense of mild tension or self-conscious unease.

Such emotional range has its pitfalls, of course, with misinterpretations causing some real-life grimaces of their own. But while imperfect, that range also has its advantages. Very often in our texts and tweets, we just can’t exactly put into words what we’re feeling. If only we had some sort of tool for that 🤔😬.