In the beginning Shigetaka Kurita[1] created emoji on NTT Docomo phones in Japan. Now the emoji was limited and small, text was still pervasive, and the upcoming influence of the people was hovering over the waters.

And the people said, “Let there be more emoji,” and emoji was added to other carriers. The people saw that the emoji was good, and separated the emotions from the text.

And the people said, “Let there be a way to include emoji on phones in other lands.” So emoji made the transition to Unicode. And it was so.

And the people said, “Let the emoji be more representative so the people aren't all white.” And it was so.

We called the default skin tone a “non-human shade” which was generally yellow. And options were added for diversity and this was called "skin tone modifiers.” And the people saw that it was good. 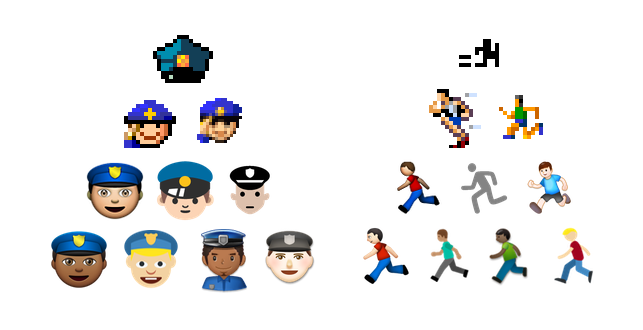 Then the people said, “Let us make emoji in our image, in our likeness” and we added gendered versions of each emoji; male and female we created them. 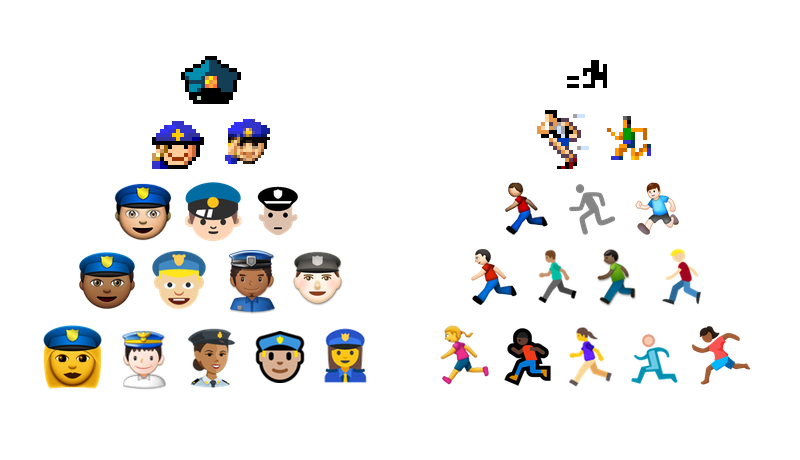 We blessed them and said to them, “Be fruitful and increase in number; multiply to include more occupations, especially for women who are under-represented.”

The people saw all that we had made, and it was very good.

A list of new female and male emojis was published by Unicode earlier this month, which paves the way for vendors to support these in late 2016.

The list is effectively the last two verses of the emoji creation story[2] above. These are:

Unicode itself does not normally specify the gender for emoji characters: the emoji character is 🏃 Runner, not Man Running; 👮 Police Officer not Policeman.

Despite the intention for most current emojis not to specify one gender or another, the document goes on to state that:

To get a greater sense of realism for these characters, however, vendors typically have picked the appearance of a particular gender to display. This has led to gender disparities in the emoji that people can use.

Particularly called out is the fact that while vendors are free to choose which gender they display any emoji as[3], it remains true that:

Vendors cannot have both a male and female version of each one.

Having greater representation of women in meaningful roles in emoji has been widely welcomed, but not by everyone.

As part of Unicode's efforts to diversify the emoji range to include more female representation, feedback can submitted.

One item of feedback sent in response to this Unicode proposal is from Charlotte Buff who writes:

I firmly believe that Unicode should refrain from adding any more emoji with explicit gender and I'm not the only person to do so.

The reasoning here is that we cannot change that some emojis already exist with gender, but adding additional gendered emojis is not advisable. This feedback goes on to state:

I want to make it very clear that there are still fundamental flaws in [these] documents affecting men, women and people with non-binary genders alike

Particularly highlighted is the fact that some emojis are excluded from list of gendered emoji additions such as 👰 Bride With Veil, 👲 Man With Gua Pi Mao and 🤰 Pregnant Woman.

If the Unicode Consortium wants proper gender representation in emoji, it needs to be able to represent pregnant people who aren't female

I suggest reading the full feedback for a more detailed view.

Some notes on the current plans for gendered emojis:

While I have focussed on some of the gender issues raised here — and these are valid and succinctly written — the broader issue of representation in emoji remains.

Foods, objects, clothing, gestures, sports: there is so much diversity in the world, yet there are real technical and practical limitations surrounding just how many new emojis can be supported in future.

The most pragmatic approach is about priorities. Start with the most pressing issues, and then address the next.

Just because increasing representation in emoji can be difficult to do, it doesn't mean we shouldn't try.

The longer-term goal for implementations should be to support embedded graphics, in addition to the emoji characters.

That's a topic for another day, but it does indicate a potential future where anything and anyone can be represented.

Until then, stay tuned.

Note: The first footnote in this article below was updated in March 2019 to reflect the fact that the NTT Docomo emoji set was not the first, though it arguably might have been the first widespread emoji set in Japan.