iOS includes a wide range of emojis — 2,373 at the time of writing — yet sometimes that's not enough.

inTextMoji, a rebranding of the EmojiXPress app, is aiming to fill this gap with the latest release which includes a new way to send custom emojis inline with text, in all apps.

*Above: inTextMoji works as a third party keyboard and font on iOS.*

One key selection factor for Unicode emoji approval states that the following are not permitted for encoding:

"Images such as company logos, or those showing company brands as part or all of the image, or images of products strongly associated with a particular brand."

A range of solutions have cropped up to fill this gap prior to this; including sticker packs for various platforms like iMessage, or custom Twitter emojis (nee Hashflags).

inTextMoji differs from other so-called "custom emoji" solutions in that it's a downloadable app, yet:

Given inTextMoji works outside of Unicode emoji approvals, it's able to include real people, logos, and other characters that might not otherwise be eligible for Unicode encoding.

After the initial setup, this is how it looks to use inTextMoji on iOS: 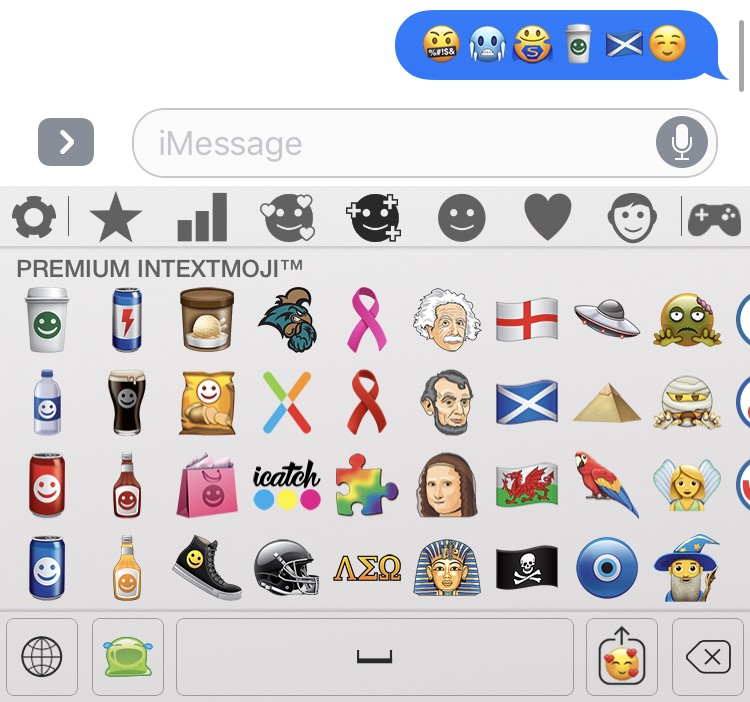 Above: inTextMoji sending custom emojis in Messages app on iOS.

As this works system-wide, it doesn't matter which app you use. The keyboard can show the options to insert, and the font does the rest. 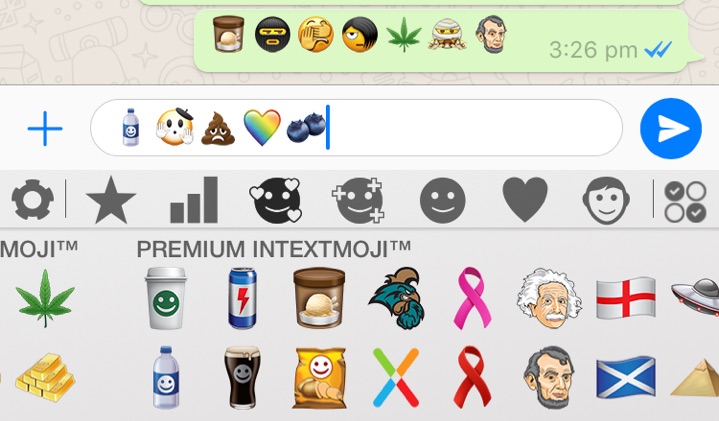 Above: inTextMoji being used in WhatsApp for iOS.

After downloading the app, a (not insignificant) number of steps are needed to enable inTextMoji system-wide:

The app provides plenty of prompts to get users through these steps. 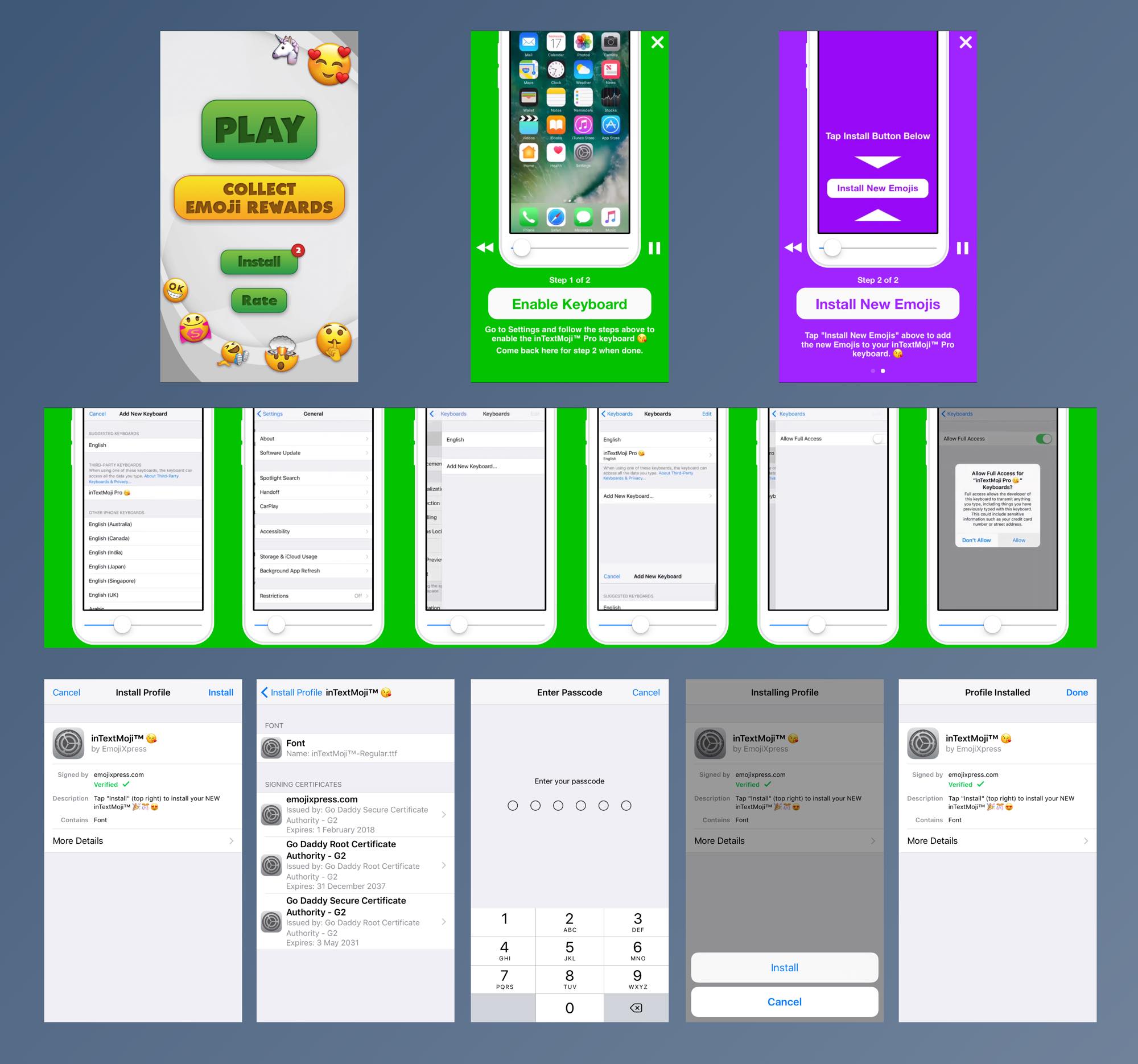 Above: Steps required to setup inTextMoji on iOS.

The lengthy setup isn't specifically a fault of the app - it's just how keyboards and fonts are installed on iOS - but it certainly does delay instant gratification for interested users.

In practice, it takes just a few minutes to get all of this underway.

Once the keyboard is enabled and the font is installed, access is via the input switcher - like any other third party keyboard: 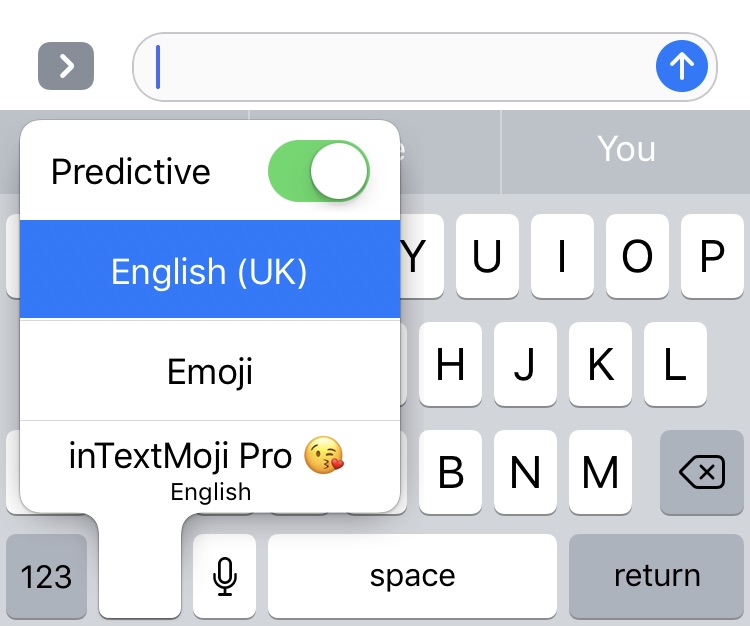 The difference is that at this point most apps either resort to copy and pasting images; or stick to the regular Unicode emoji options.

After the installation is over, what users are really here for is the custom emojis.

These vary from new types of smileys, custom colors on hearts and dresses, and a "Premium" section hints at your brand could be here.

Some of the options are for already-approved emojis from Emoji 5.0 that haven't yet come to iOS; like Face With Symbols Over Mouth or Flag for Scotland. I should note these aren't using the standard Unicode codes for these emojis - they just look like the new approvals. More on this in a moment.[1]

Regular emojis sit down the other end of the keyboard and do use the regular Unicode characters: 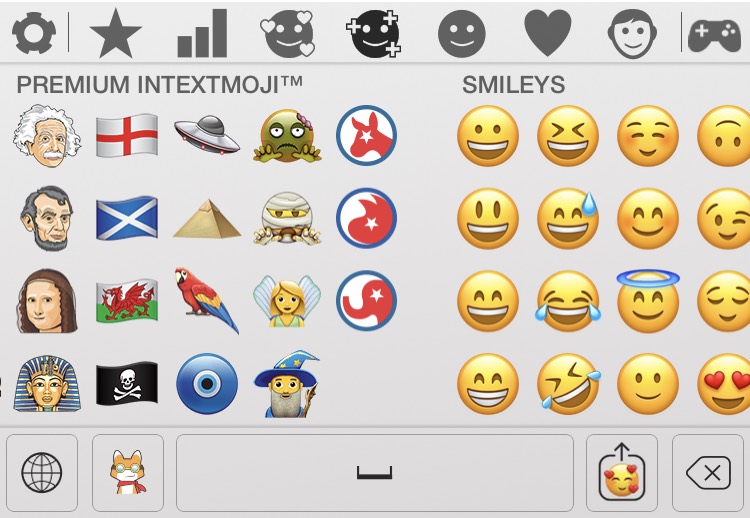 These all look well designed to fit in alongside Apple-designed emojis, and have a wide selection that will appeal to a lot of users.

And while Unicode could never encode a Superman emoji or a Starbucks emoji; an app like this is free to do as it pleases. 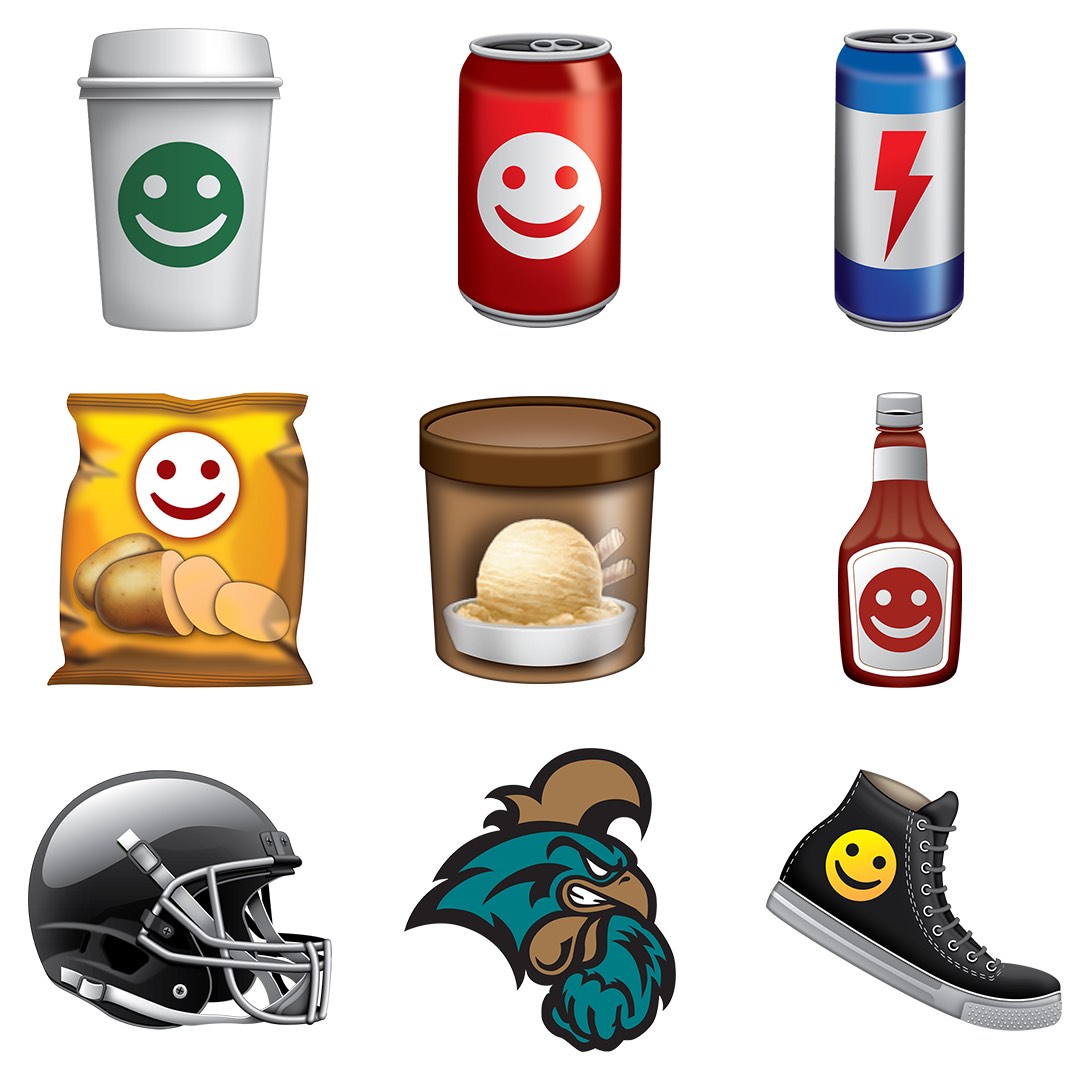 For users, the experience feels just like sending a regular emoji.

Just like traditional emojis, the image itself isn't sent over the air, but this does mean that both sender and recipient need the font installed to see any of the custom emojis. 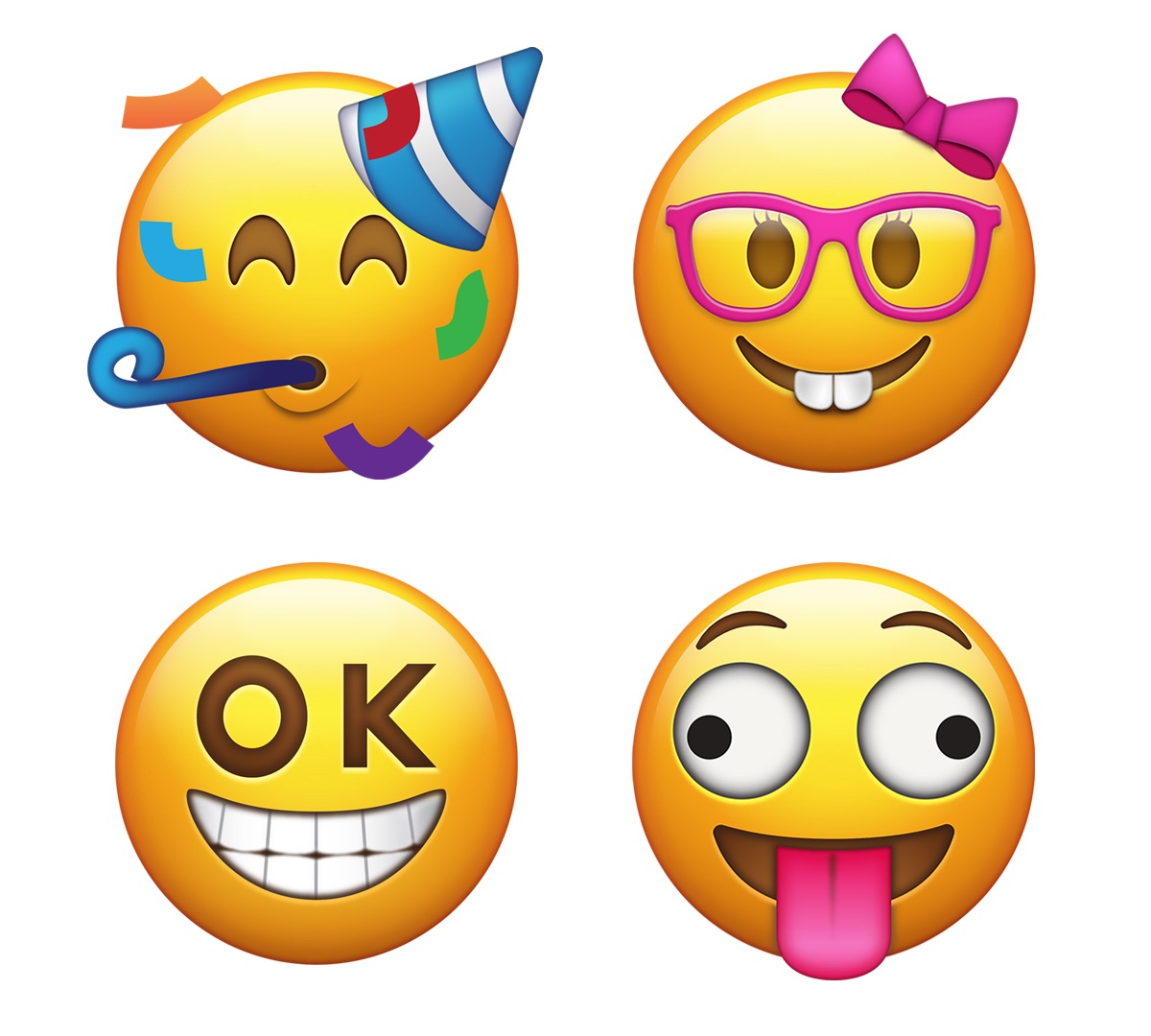 At launch there are 187 custom emojis in the app. It's likely that more will be added over time.

At first I was puzzled about how this works.

Many apps claim to install custom emojis but really use some variation of stickers where the image is sent as an attachment and not in-line with text.

inTextMoji definitely allows the characters to sit alongside any text, in any app.

Here's how it looks to send a string of inTextMoji characters from one device to another: 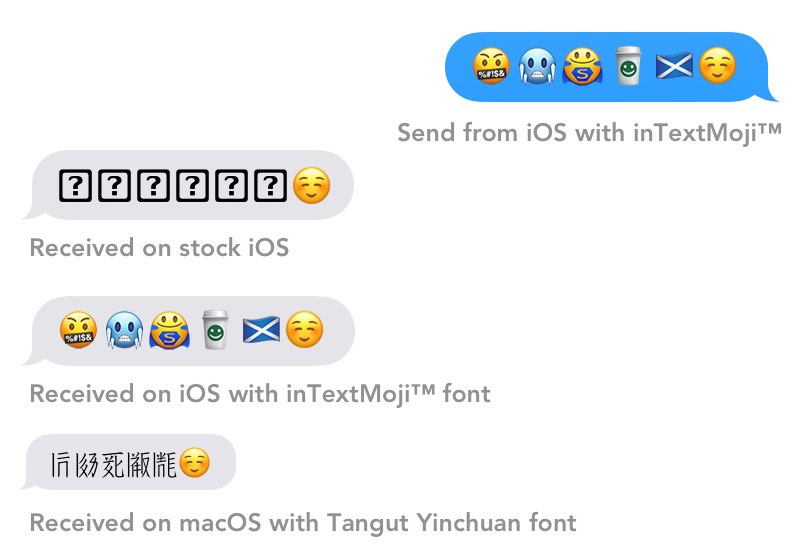 Above: inTextMoji received on various devices.

The first bubble shown above is iOS device with inTextMoji installed, sending five custom emojis, and a regular one on the end in Apple's Messages app.

The recipient bubble is an iOS device showing "question mark boxes" in place of any inTextMoji character. That's what is shown for users that don't also have the font installed. It's the same missing character symbol users might be familiar with when new emojis are available on platforms other than iOS.

Then you see another iPhone with the app and font installed, showing the emojis as intended. As a user it's impossible to tell these are any different to a regular emoji.

Lastly you see something different altogether on macOS.

inTextMoji sends somewhat obscure Tangut characters as its way of getting a custom emoji from one phone to another. These aren't supported by any font that comes with iOS by default.

When the inTextMoji font is installed, it becomes the the only font which registers as having glyphs available for character such as 𗀰 or 𗁀 or 𗀑.

It's sort of like Wingdings - where the letter J shows a smiley face - but for 2017.

I happen to have the Tangut Yinchuan font installed on my Mac, which means I see those characters as originally intended when sent from iOS to macOS.[2]

A similar "missing character" box would normally appear for other users on macOS, unless they also have a Tangut-supporting font installed: 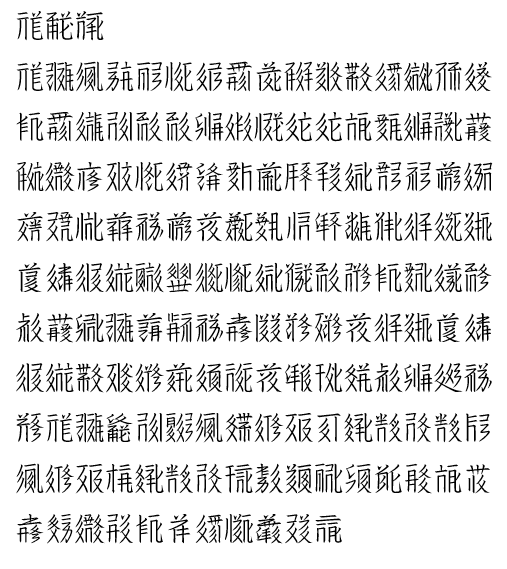 If you start seeing Tangut characters appearing around the web out of context, this could be why.

Here's the same tweet from above, shown on iOS with the inTextMoji font installed: 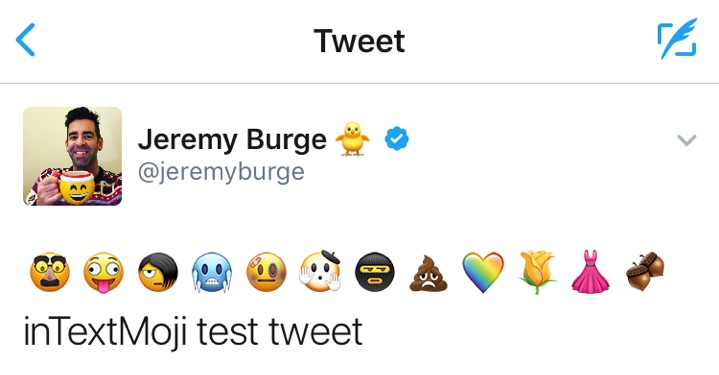 Users who have downloaded the EmojiXPress app in the past will notice the latest update renamed the icon on the home screen to inTextMoji.

New users can download inTextMoji for free from the App Store and follow the prompts to install the keyboard and font.

An Android version is not available at this time.

Update 26 May 2017: EmojiXPress have stated that the use of Tangut characters was unintentional and that a fix will be available as soon as possible.

Update 13 June 2017: There have been no further updates to this app as yet, and Tangut characters appear to remain in use in the inTextMoji font. As such, we cannot recommend this in any way.