Microsoft's Windows 10 “April 2018 Update” (most commonly referred to as Spring Creators Update until now) has been released today with 104 emoji changes.

Whilst there are no new additions to the set,[1] tweaks and iterations are a definite nod in the direction of artwork on other platforms whilst still adhering to the distinct design language.

It's worth noting up front that the recent pistol emoji redesign previewed by Microsoft is not a part of this release. It's likely this will come as part of a future update later in the year.

The group shot below shows the highlights the subtle changes that have occured since the Windows 10 Fall Creators Update in 2017 and how designs in general are starting to align with other platforms, particularly iOS.

In 2016, Unicode added support for new professions, and ensured that existing emojis that showed as a man had a woman counterpart, and vice-versa. These additions formed part of Emoji 4.0 and included a woman guard, woman police officer, woman construction worker and a new woman cook and man cook. 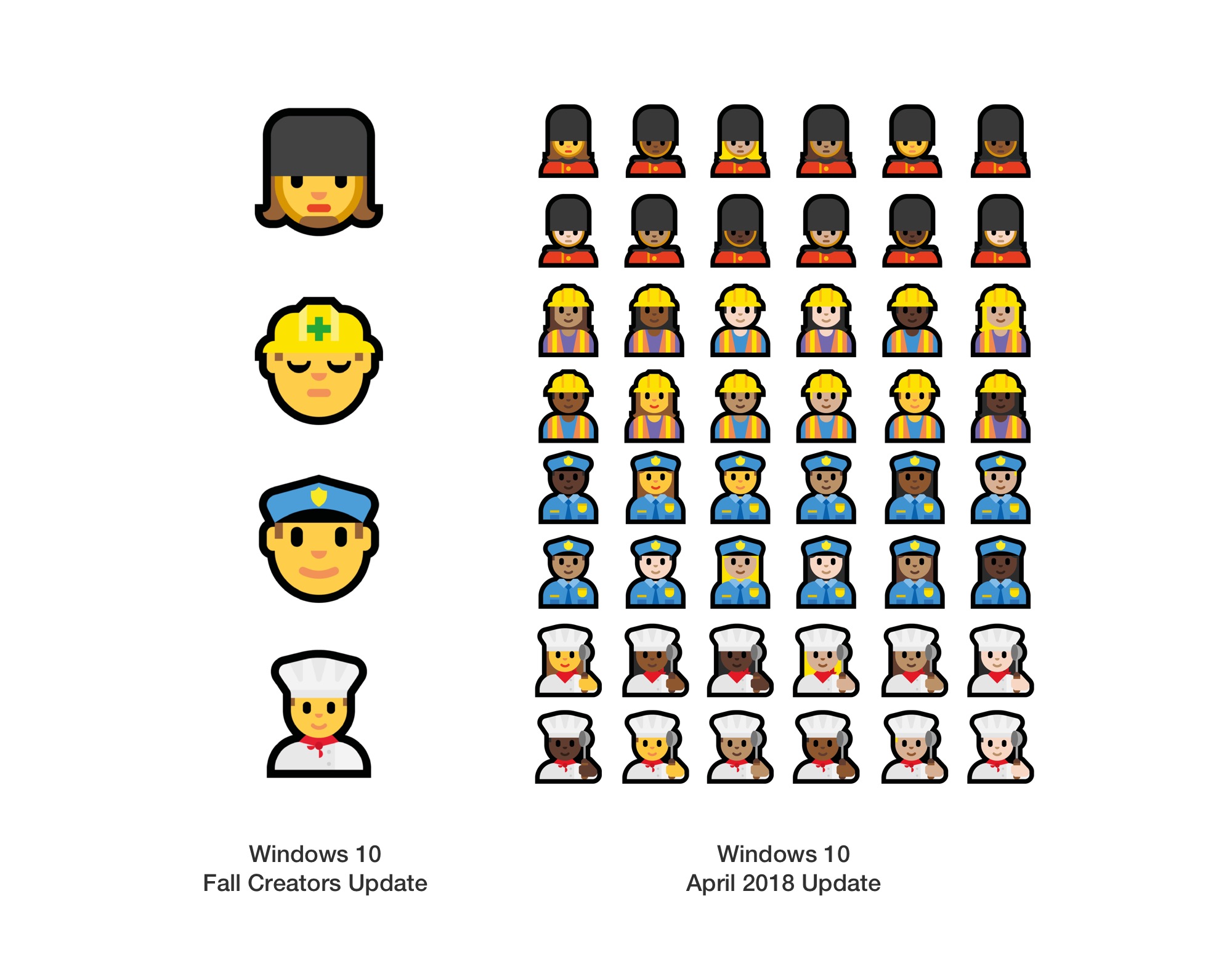 In Windows 10 April 2018 Update the most notable changes for these groups are that we are now able to see the workers' shoulders and uniform visible on other platforms.

The cooks look more ready for action with a spoon as utensil of choice.

All are drawn with the distinct thick outline used in the entire Segoe UI Emoji font.

A number of emojis have changed appearance in this update. Most are minor tweaks that either make existing images clearer, or to bring them closer to the display shown on other platforms.

😍 Smiling Face With Heart Eyes appears more loved up with heart shapes leaning-ever-so-slightly left and right of centre, matching most other platforms. The mouth shape is also now more distinct, gaining its own thick outline. 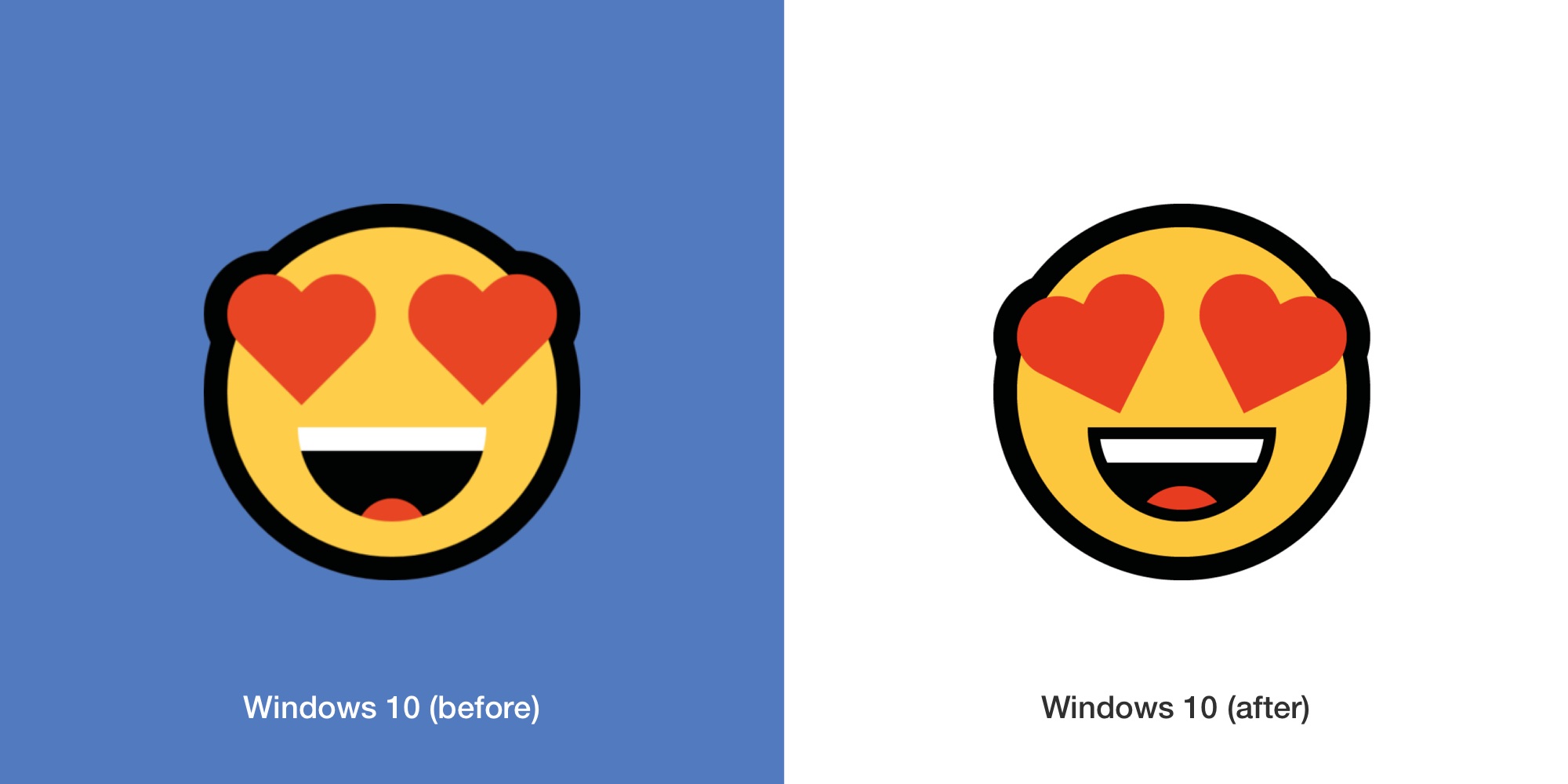 😰 Anxious Face With Sweat appears with a blue forehead only and a sweat drop dripping down its cheak, now matching all other platforms. This could help differentiate it from Cold Face coming later in the year. 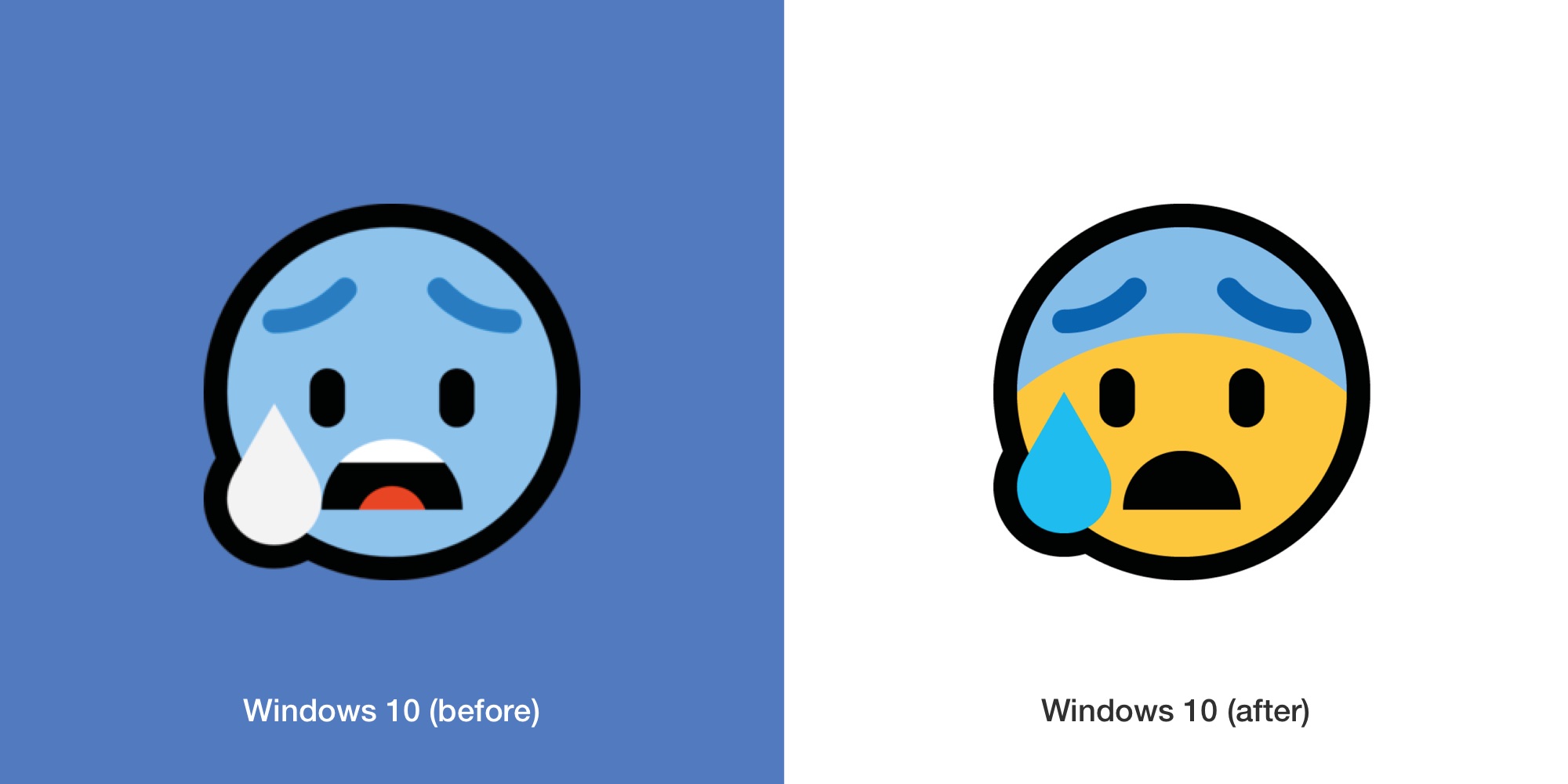 😂 Face With Tears of Joy is now such an iconic emoji that the appearance of two tears from the eyes more closely marching other platforms is an important factor in how it should be displayed. 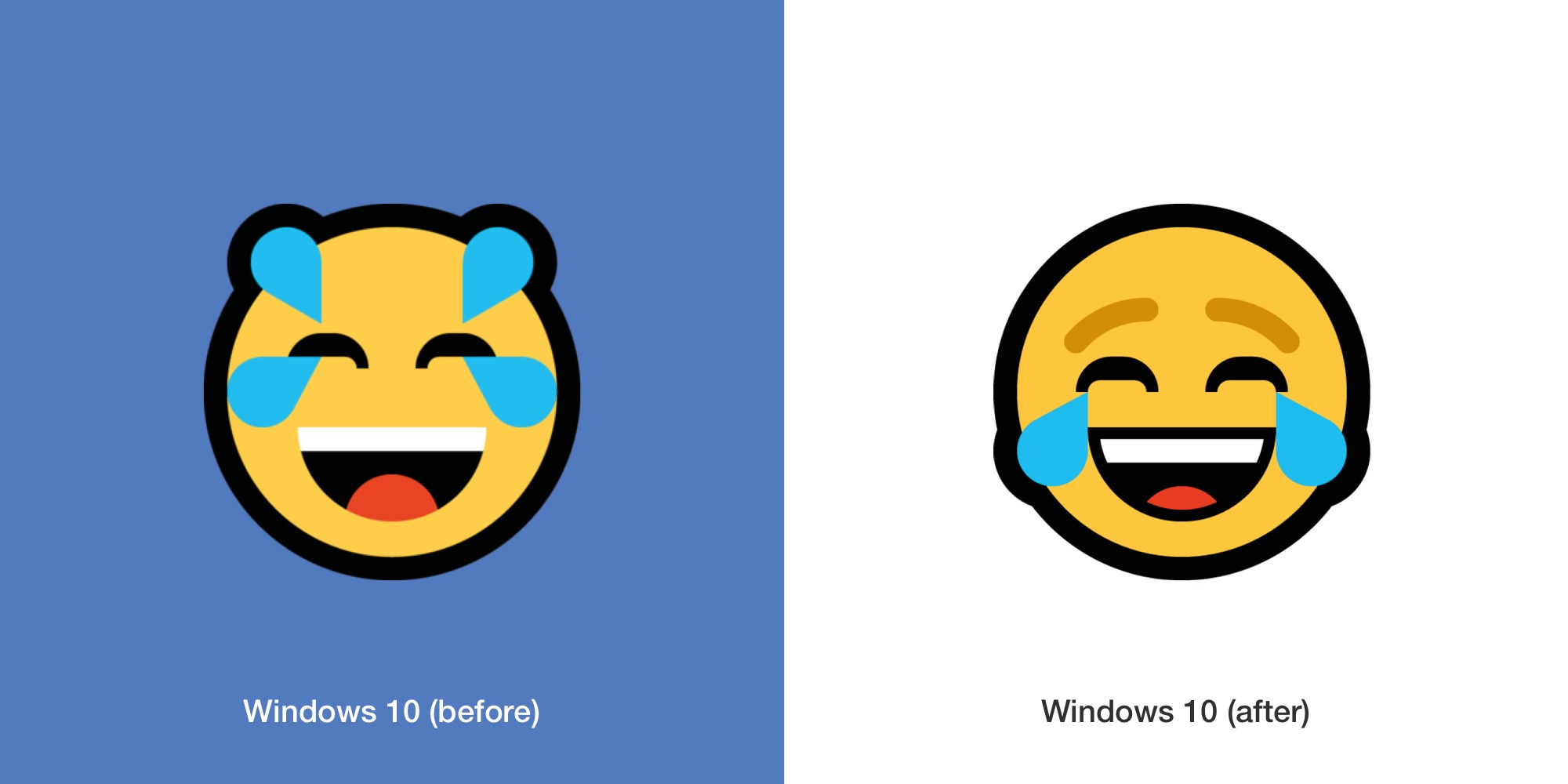 😨 Fearful Face looks even more shocked with the addition of blue to its forehead, closer to the appearance on other platforms. 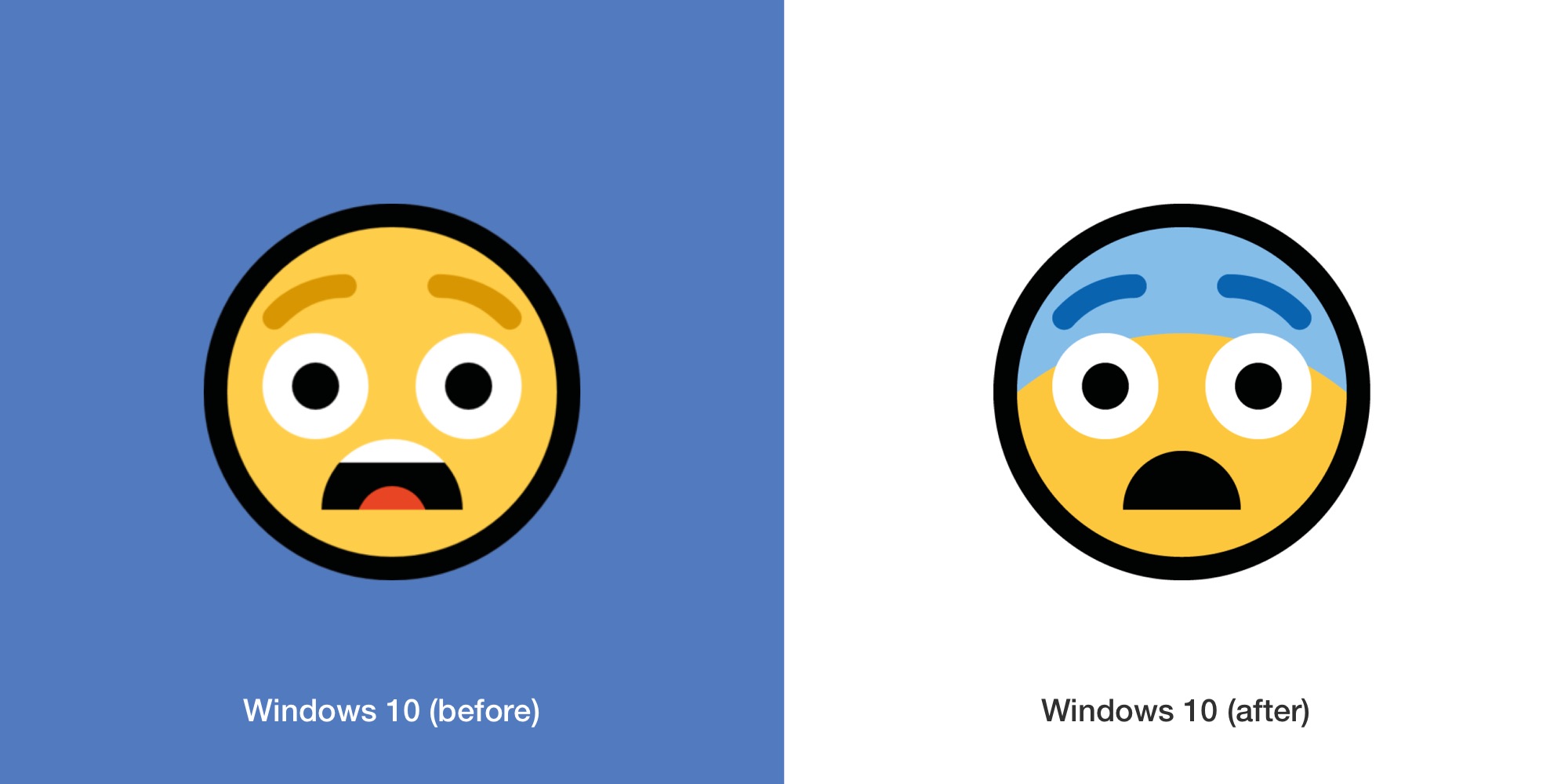 😵Dizzy Face keeps the spiral eyes, however the spirals have been simplified for a clearer display at small sizes. Visible tongue and teeth have also been removed. 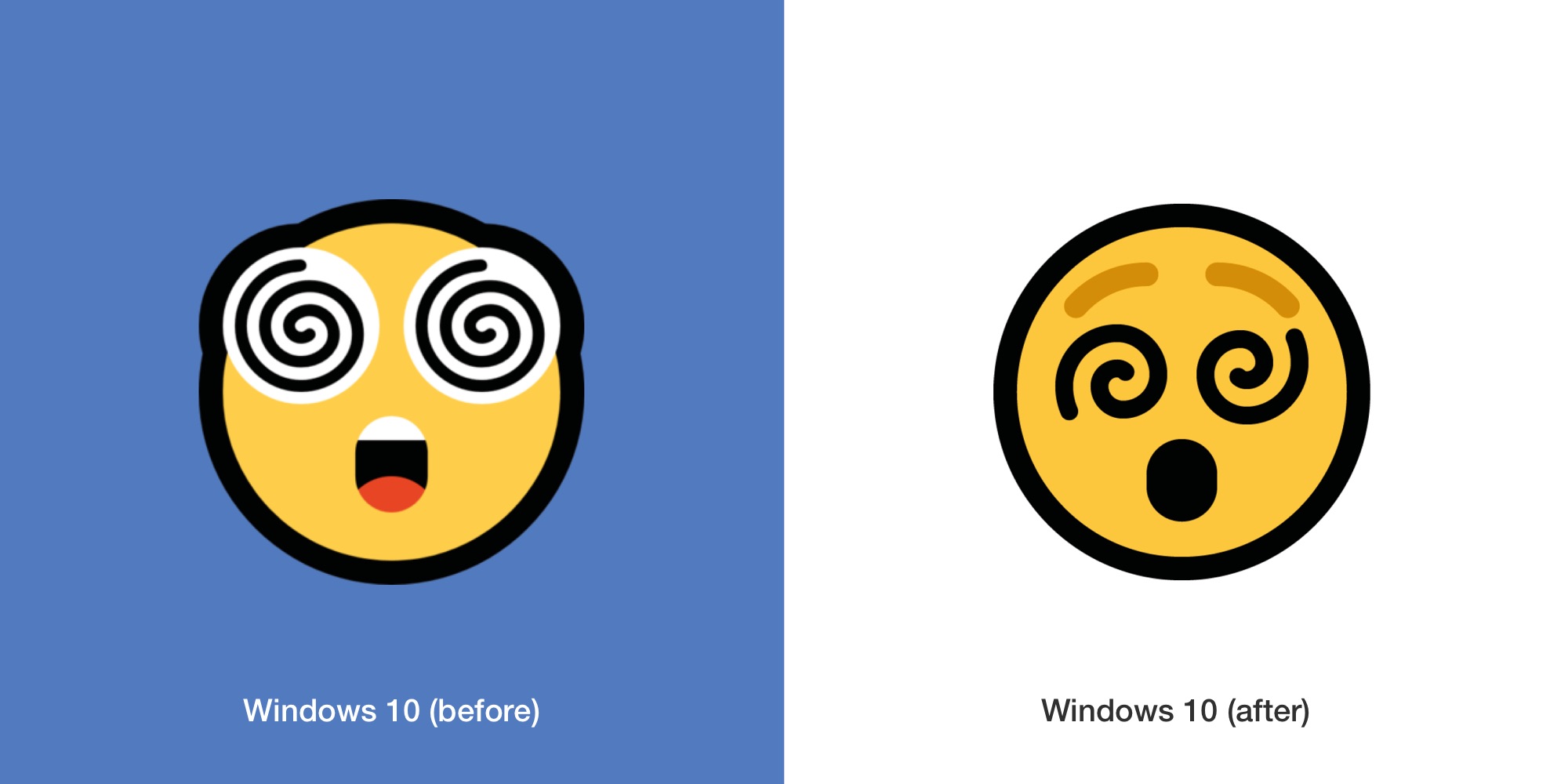 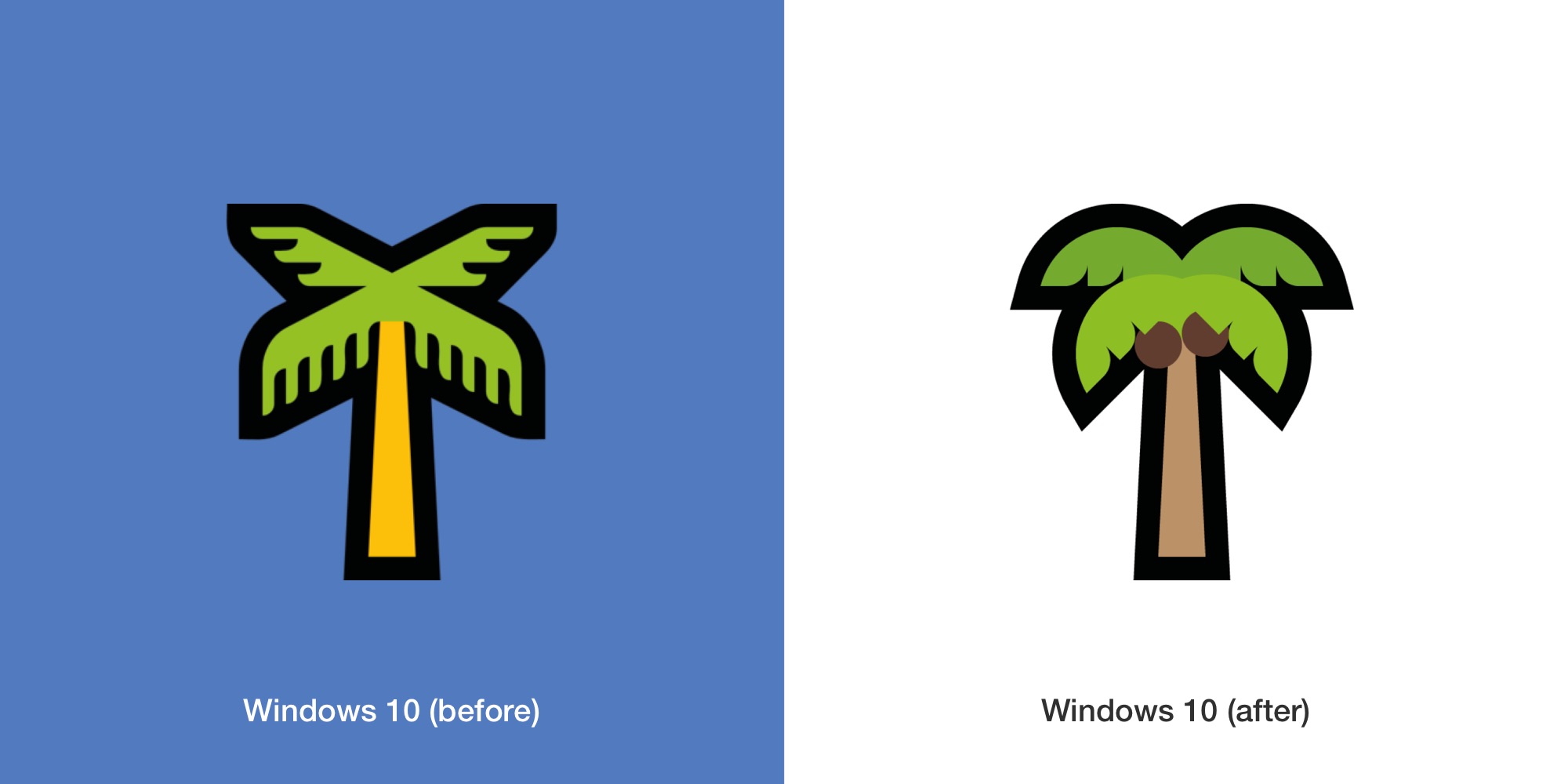 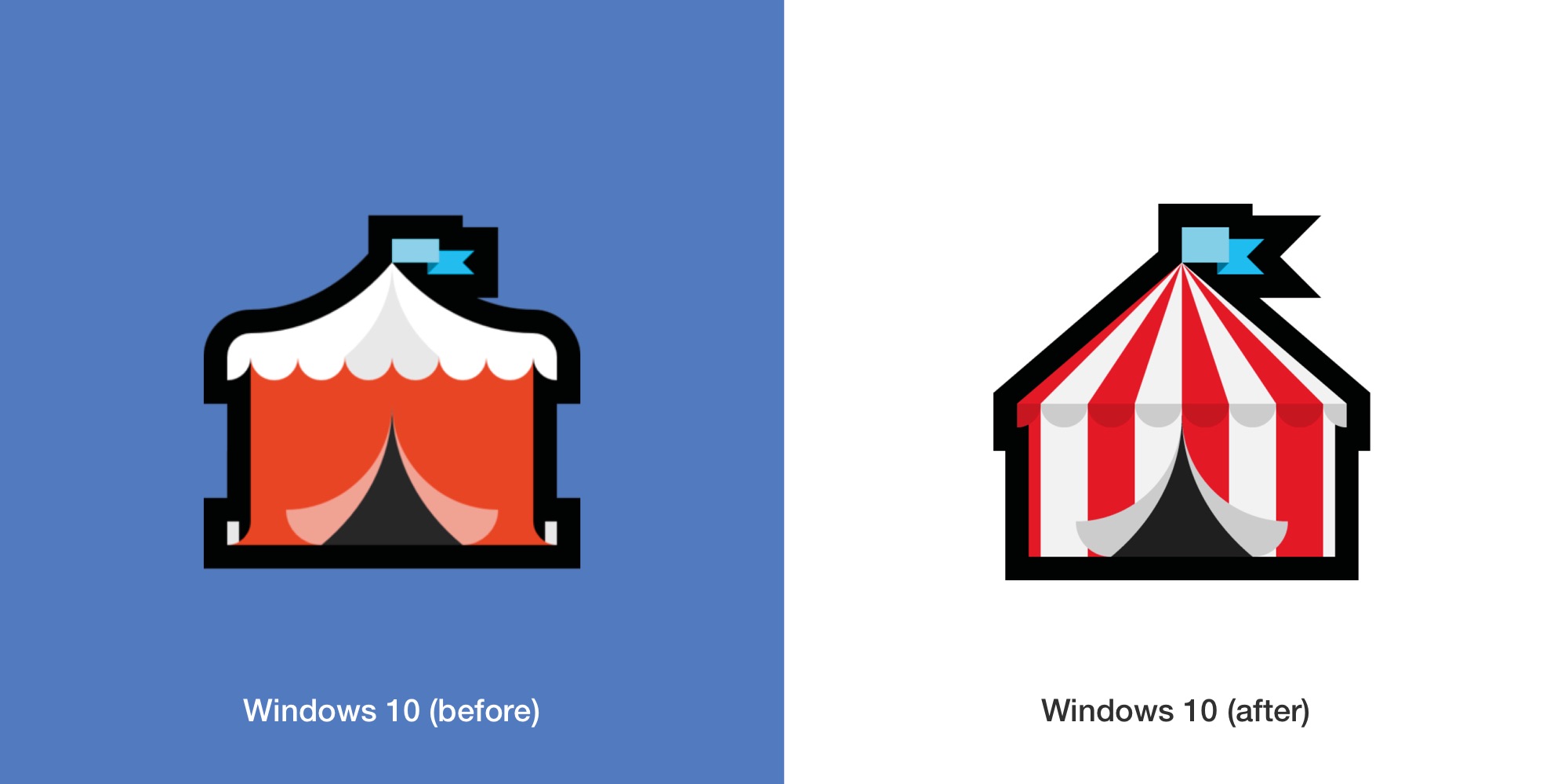 🎦 Cinema is no longer a design of literal cinema. This is now a symbol of a project, which is how this is displayed on most other platforms. 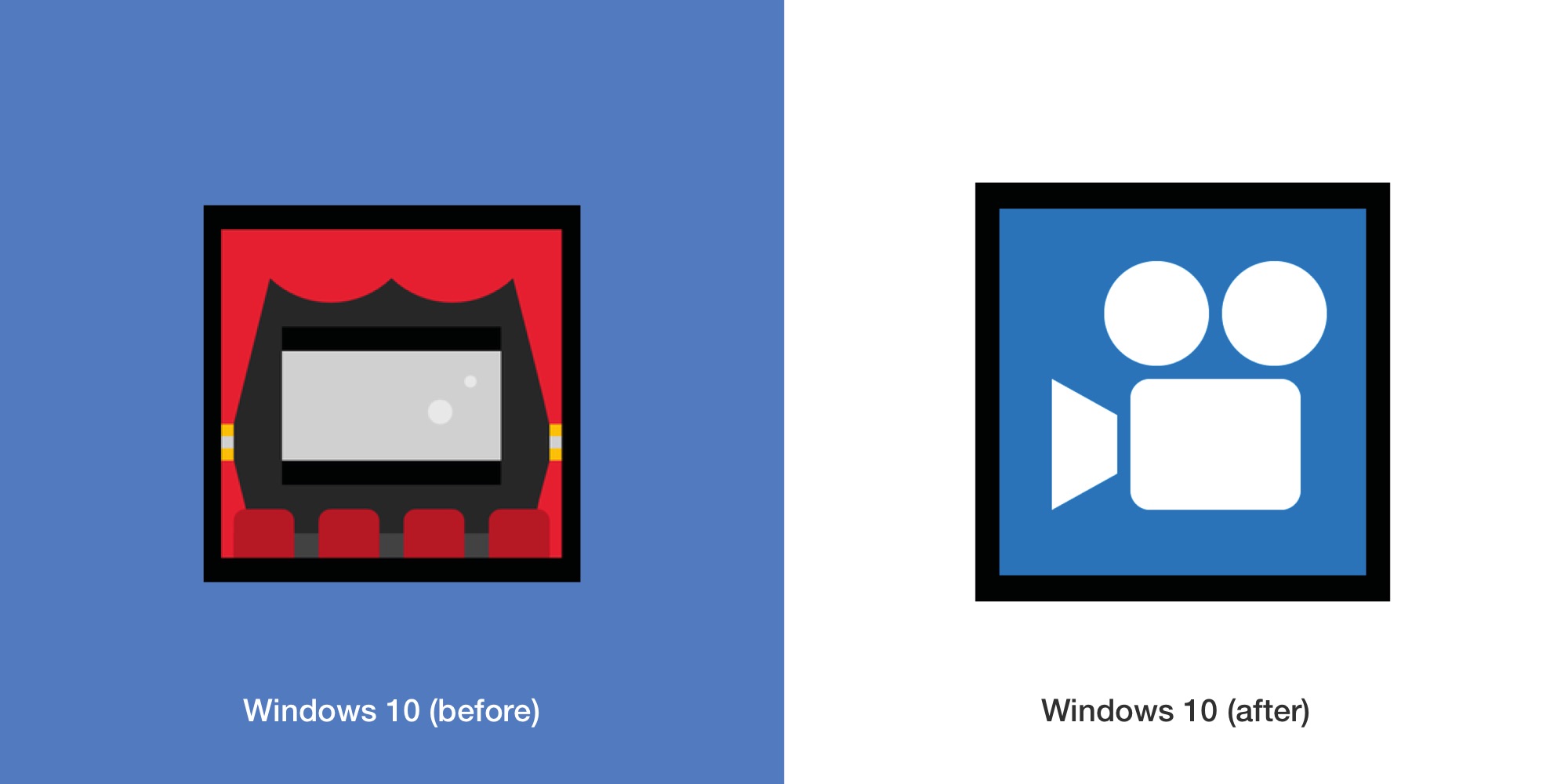 ☠️ Skull and Crossbones now shows bones laying behind the skull, rather than underneath the skull. 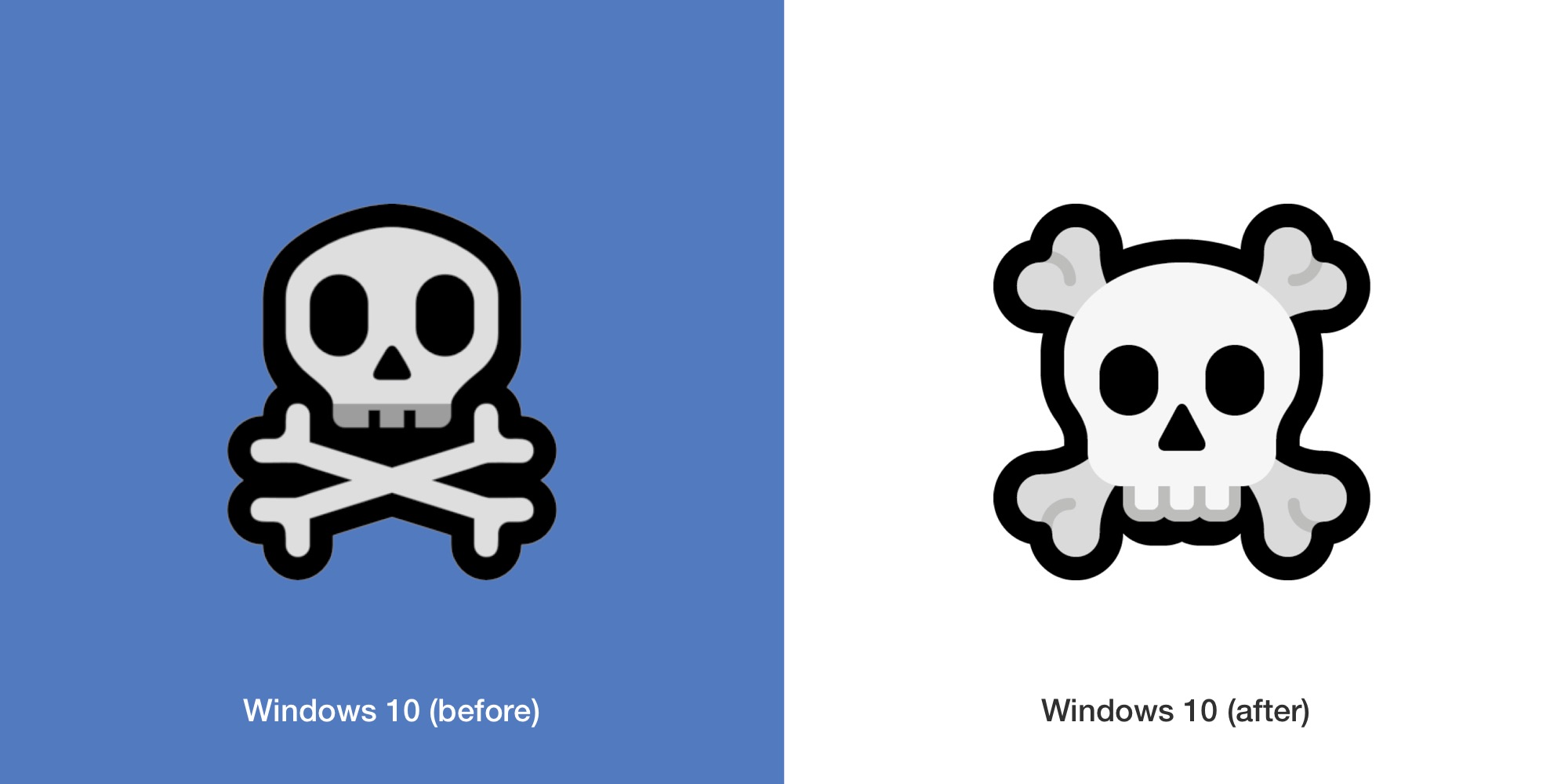 🙀 Weary Cat Face looks like it really has seen a ghost, with a wider mouth and white eyes. 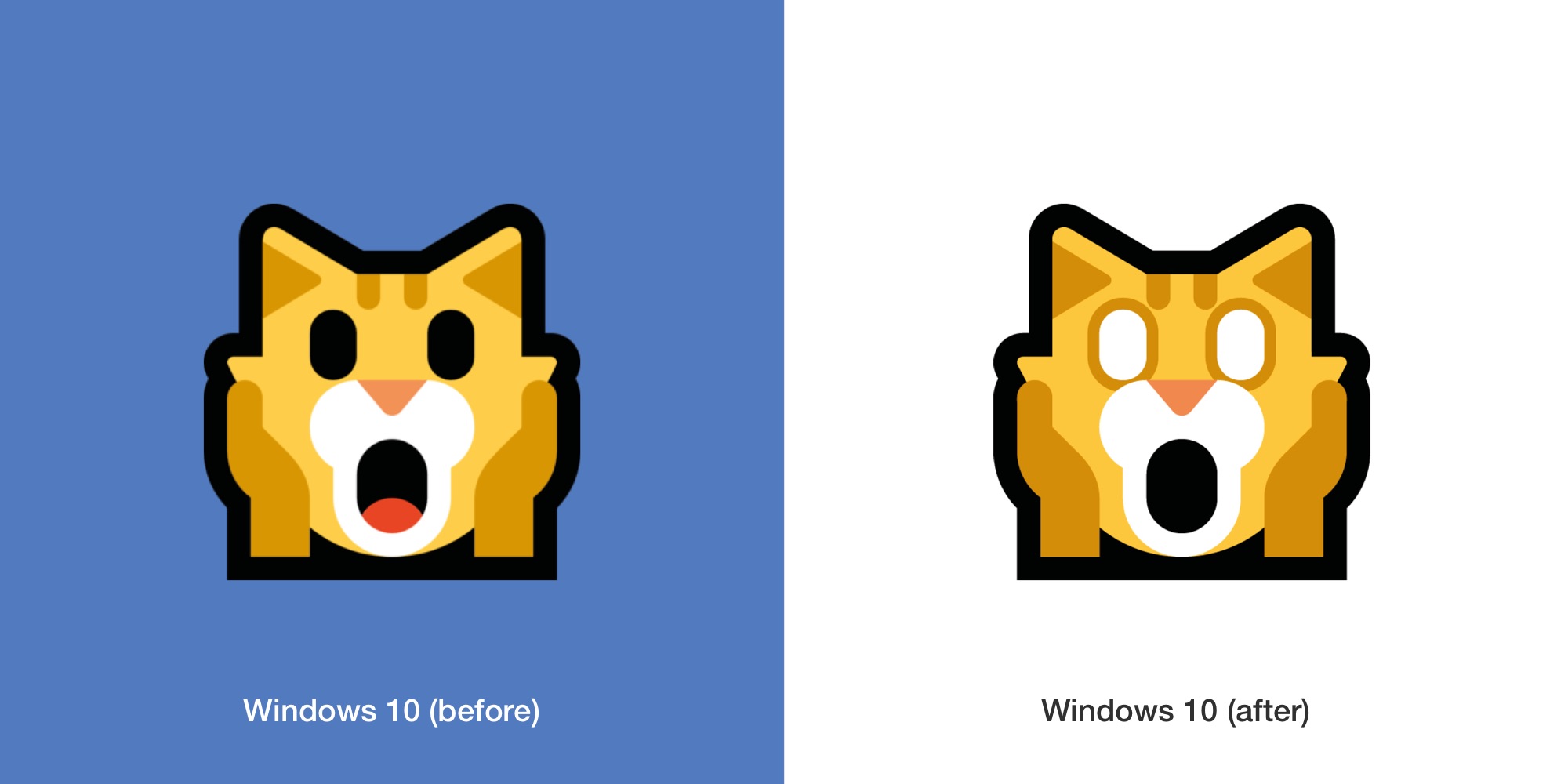 ✂️ Scissors now point downwards, which is the direction most platforms display them (for some reason). 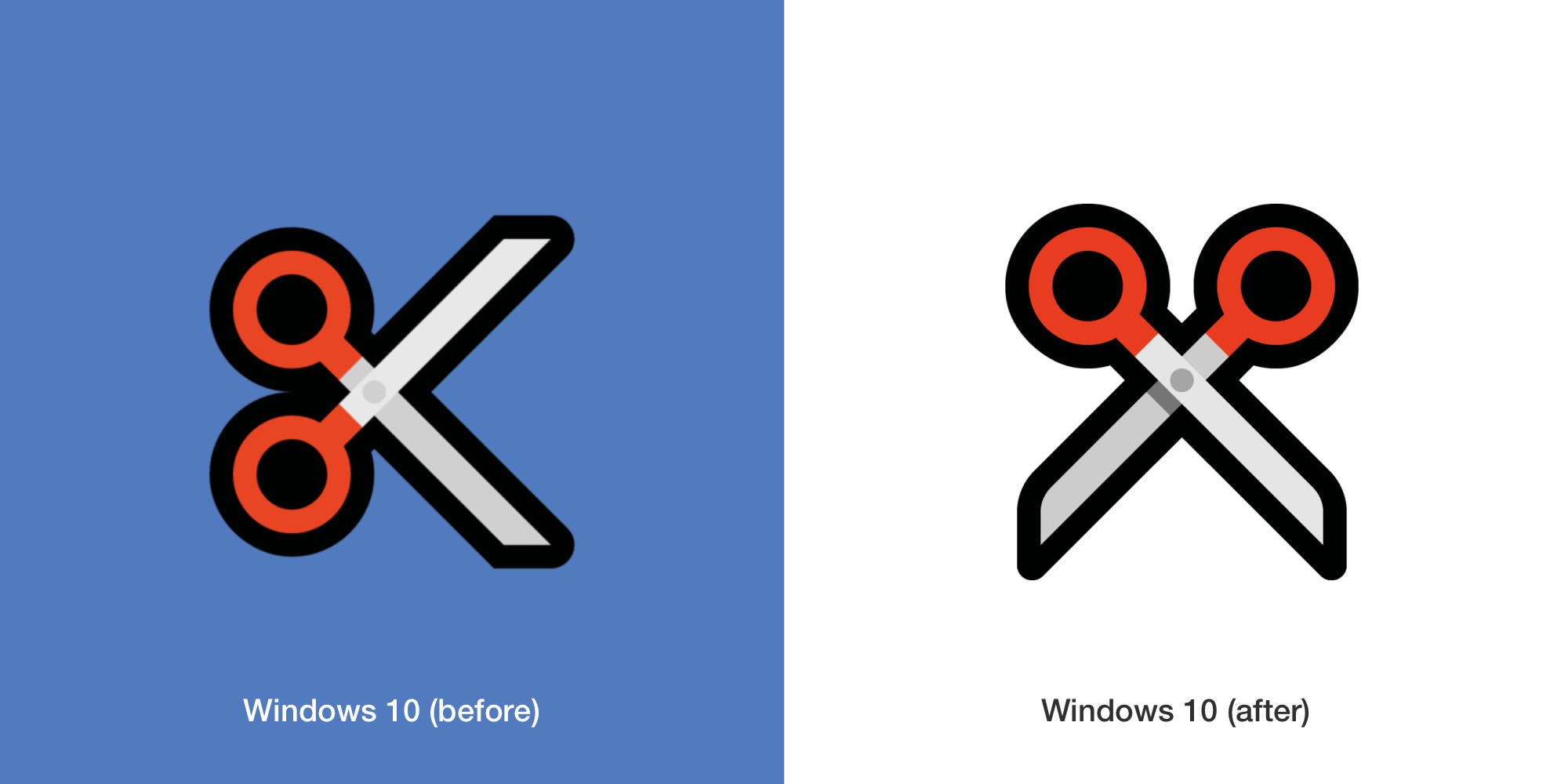 🍑 Peach now faces right and adds a second leaf, matching most other platforms.[2] 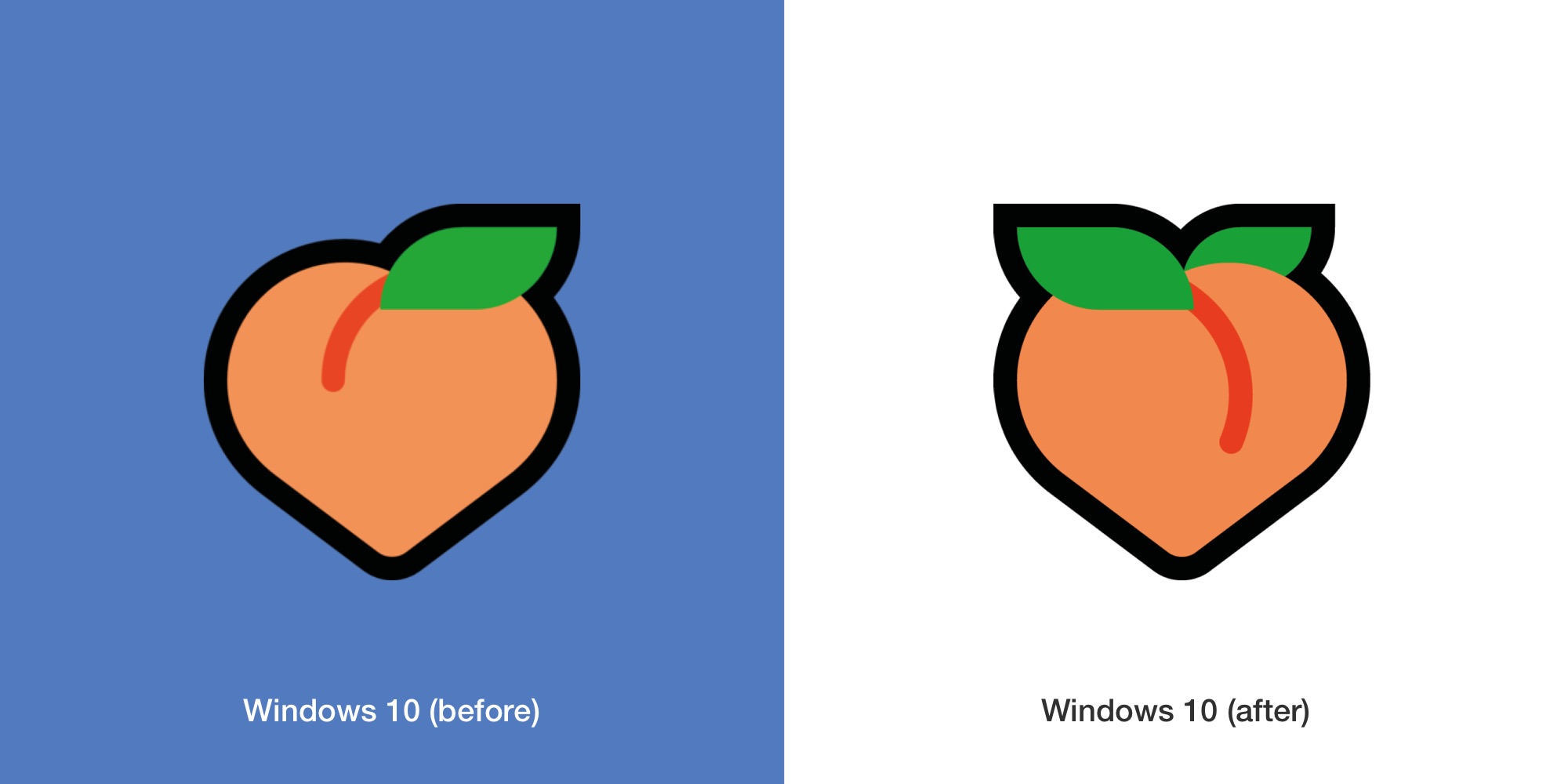 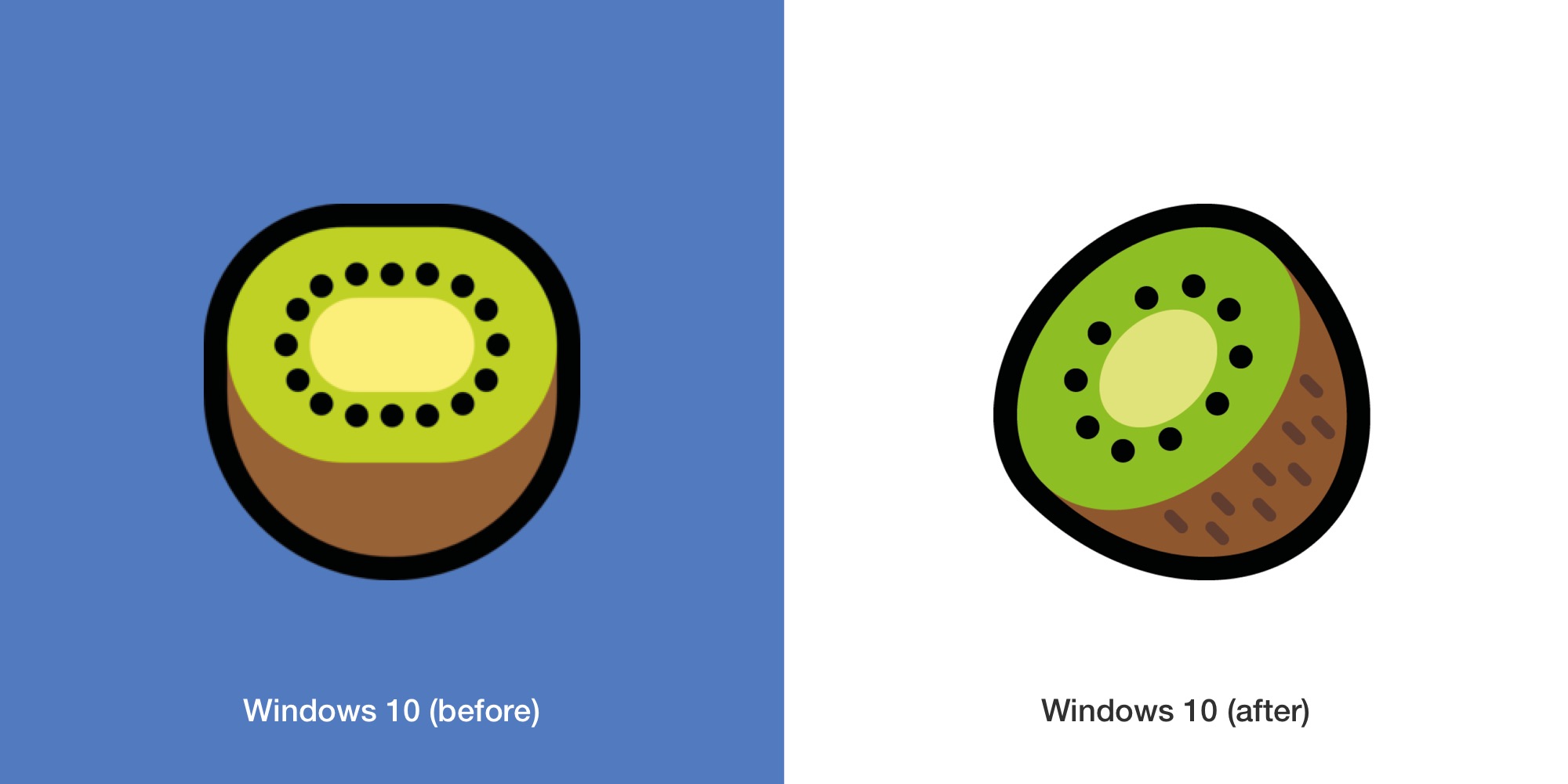 🥔 Potato looks less like an abstract dinosaur egg in this release. 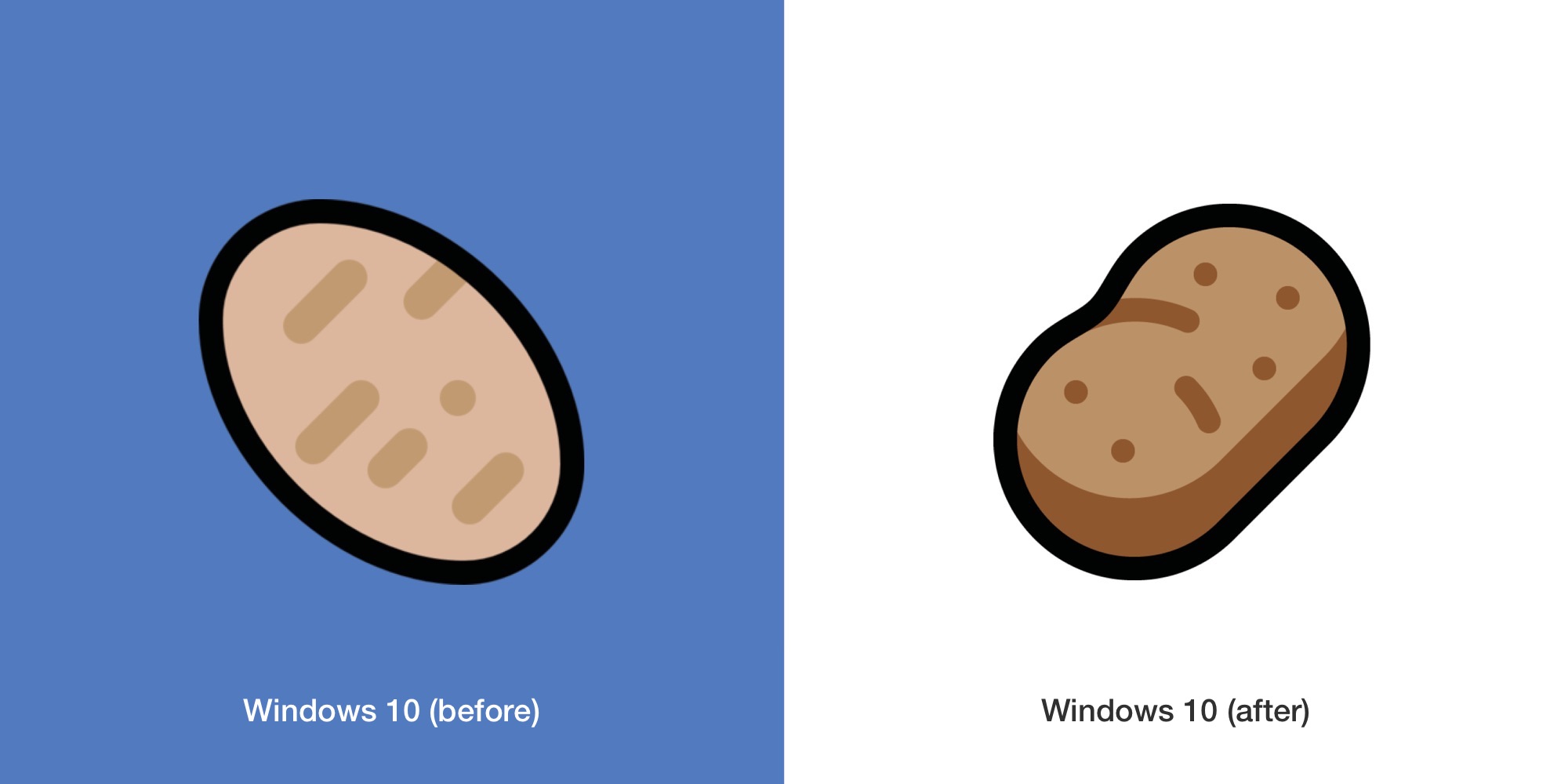 🥒 Cucumber lost reduced the distinctive bumps on the outside and switched the direction which now matches the majority of vendors. 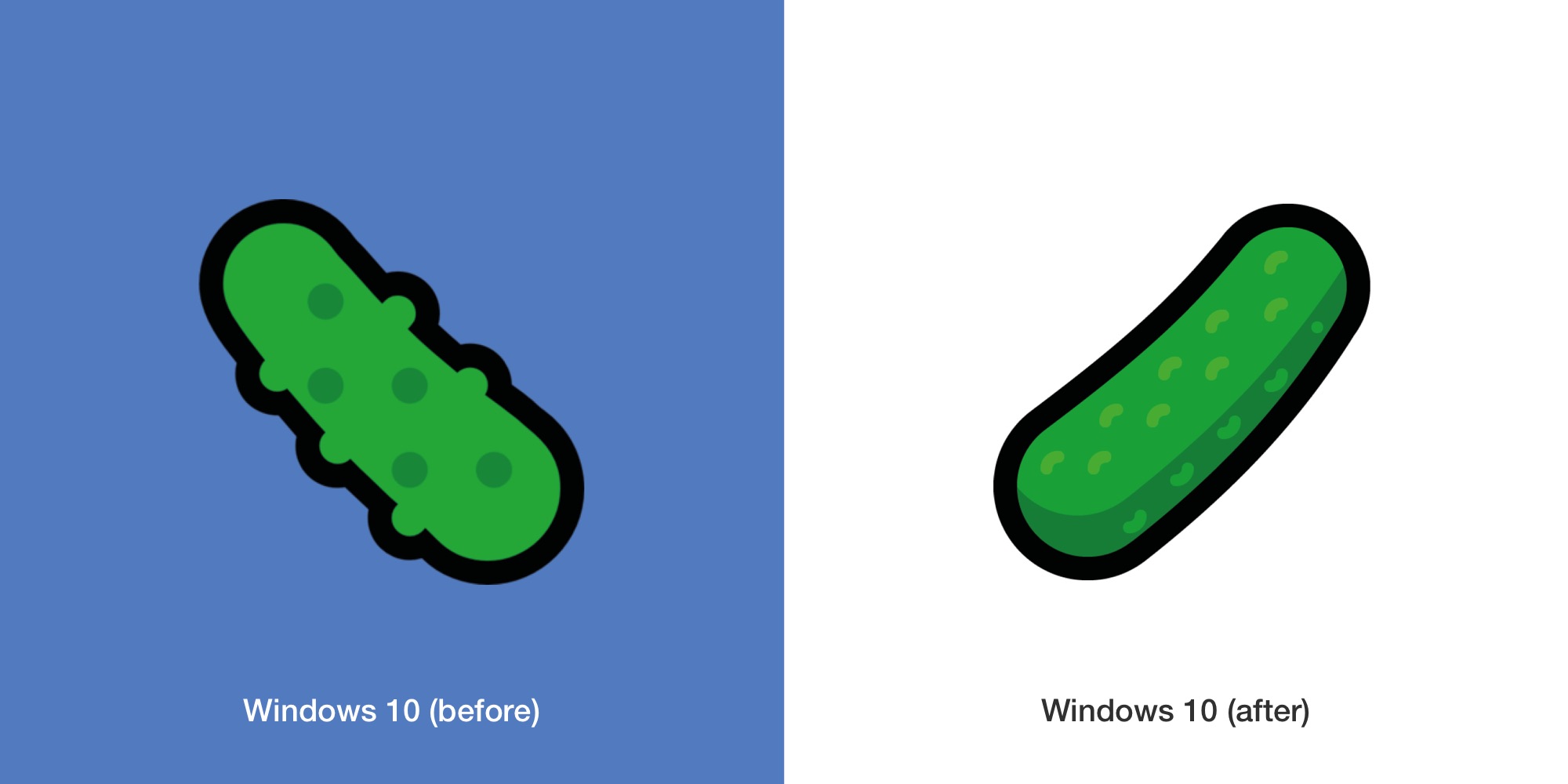 🛐 Place of Worship now has a roof over its head, more clearly showing this is intended to represent a building rather than simply a person praying. 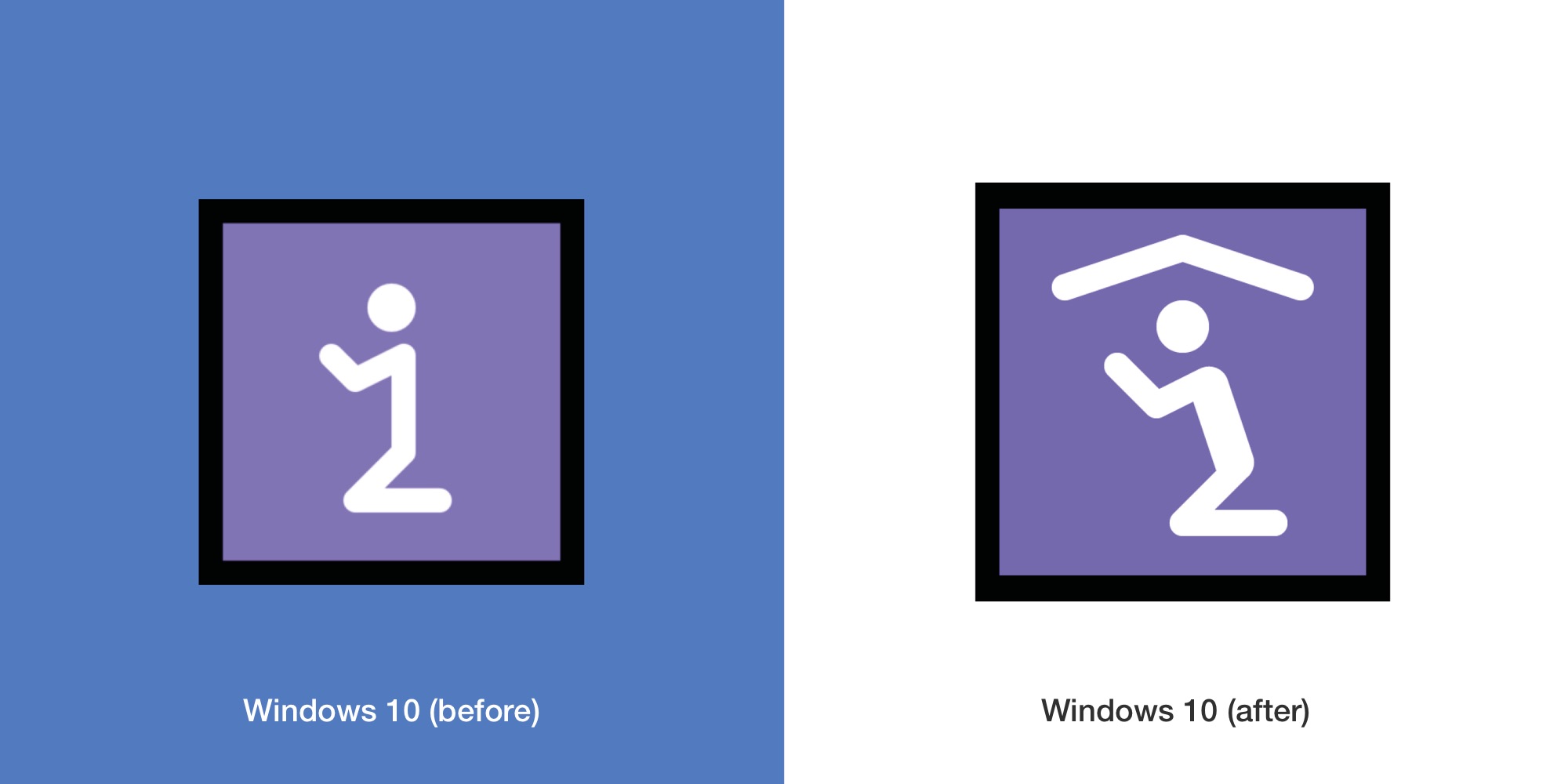 📈 Chart Increasing now appears with a red line, as used on most other platforms. 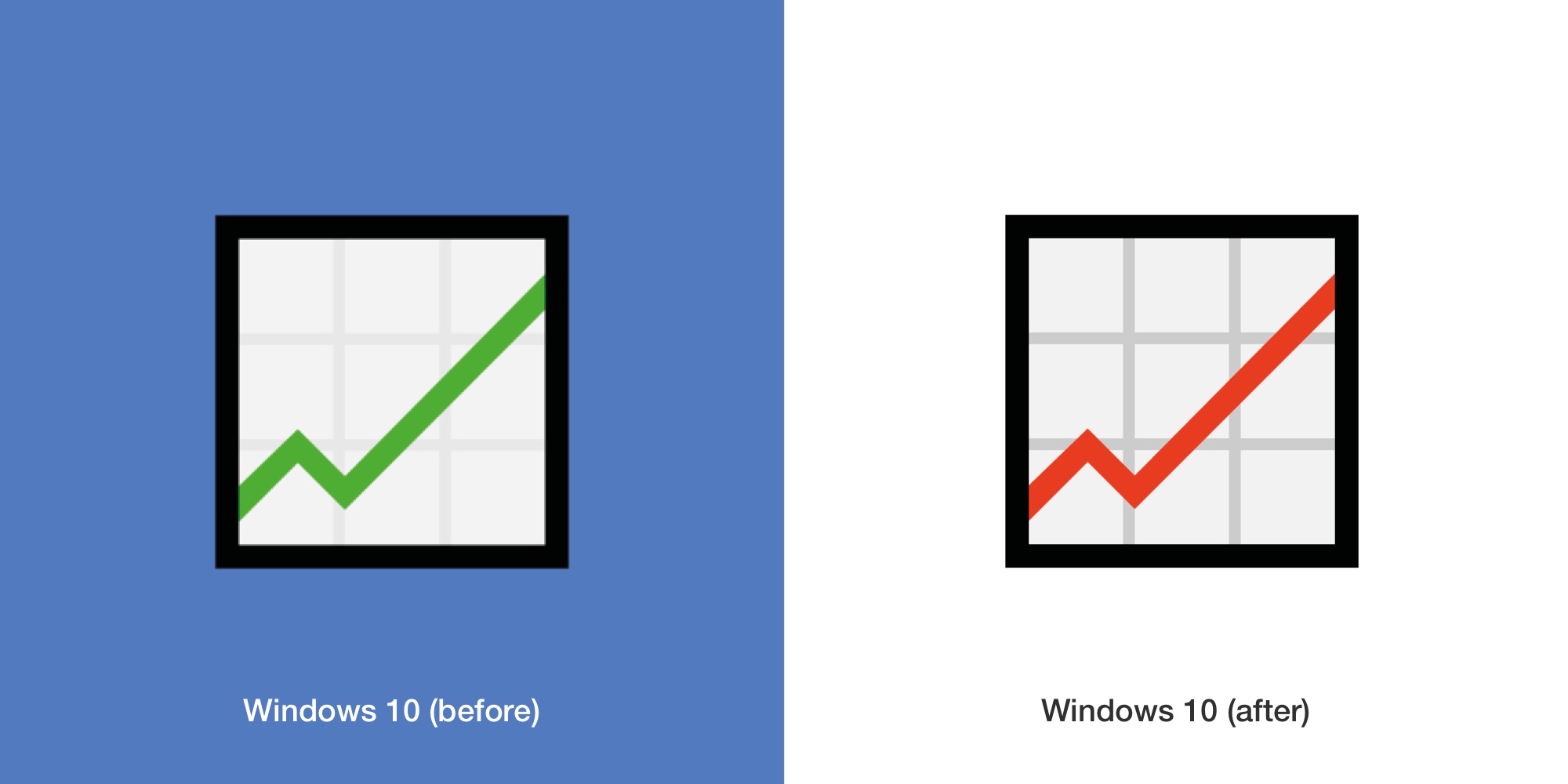 📉 Chart decreasing now appears with a blue line. also used on most other platforms. 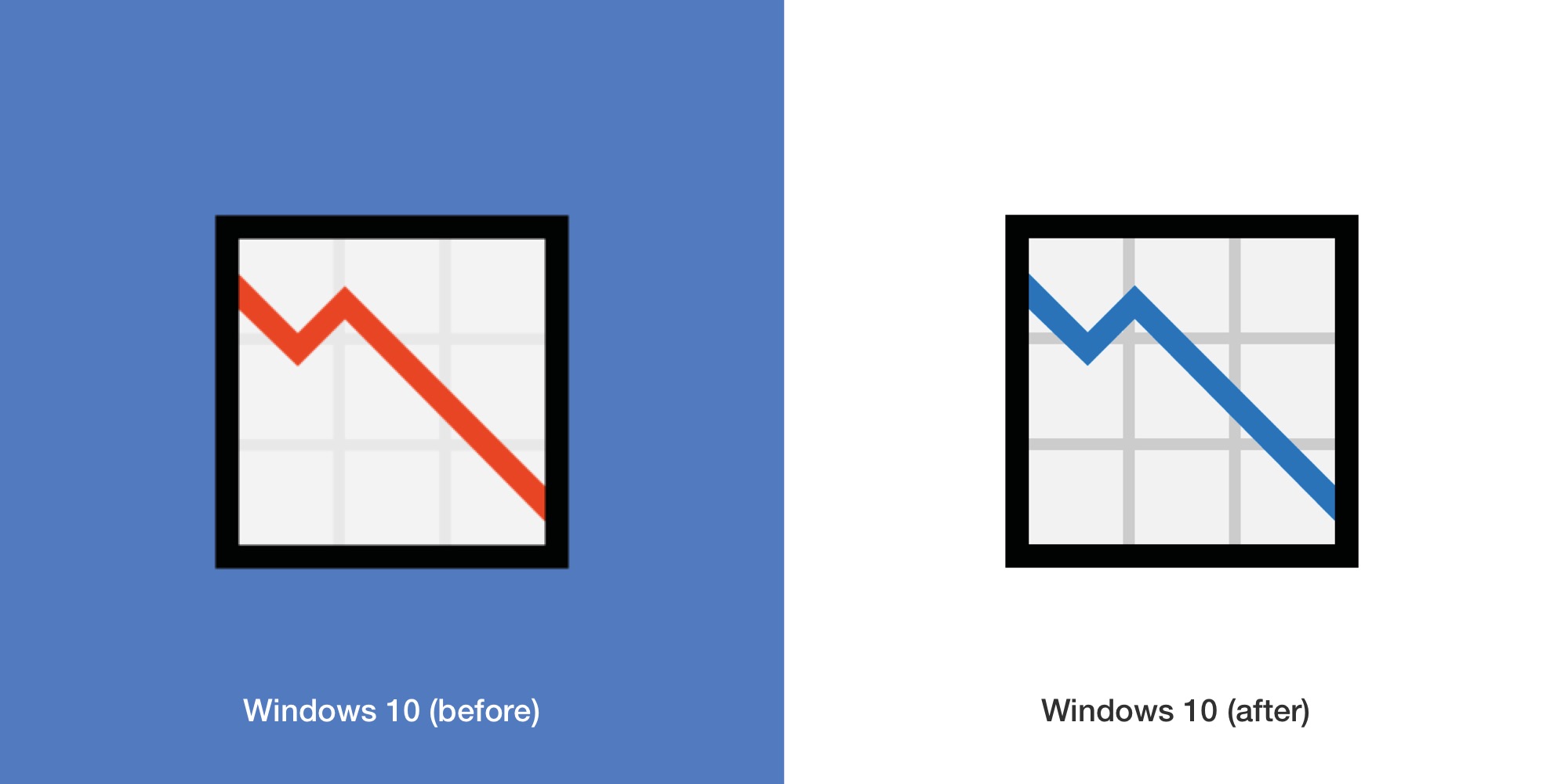 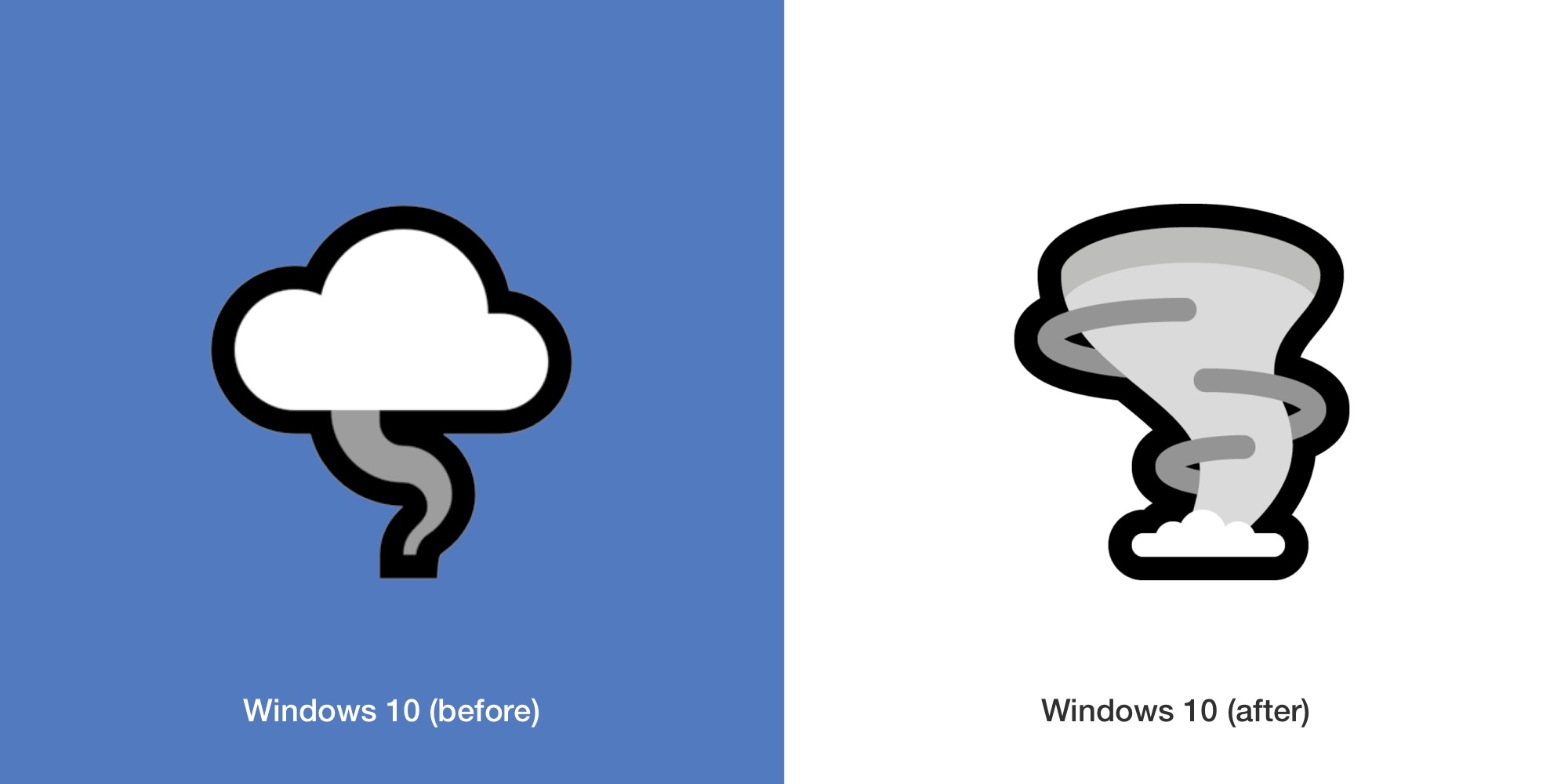 🎭 Performing Arts is more theatrical, now including ribbons alongside the redesigned masks. 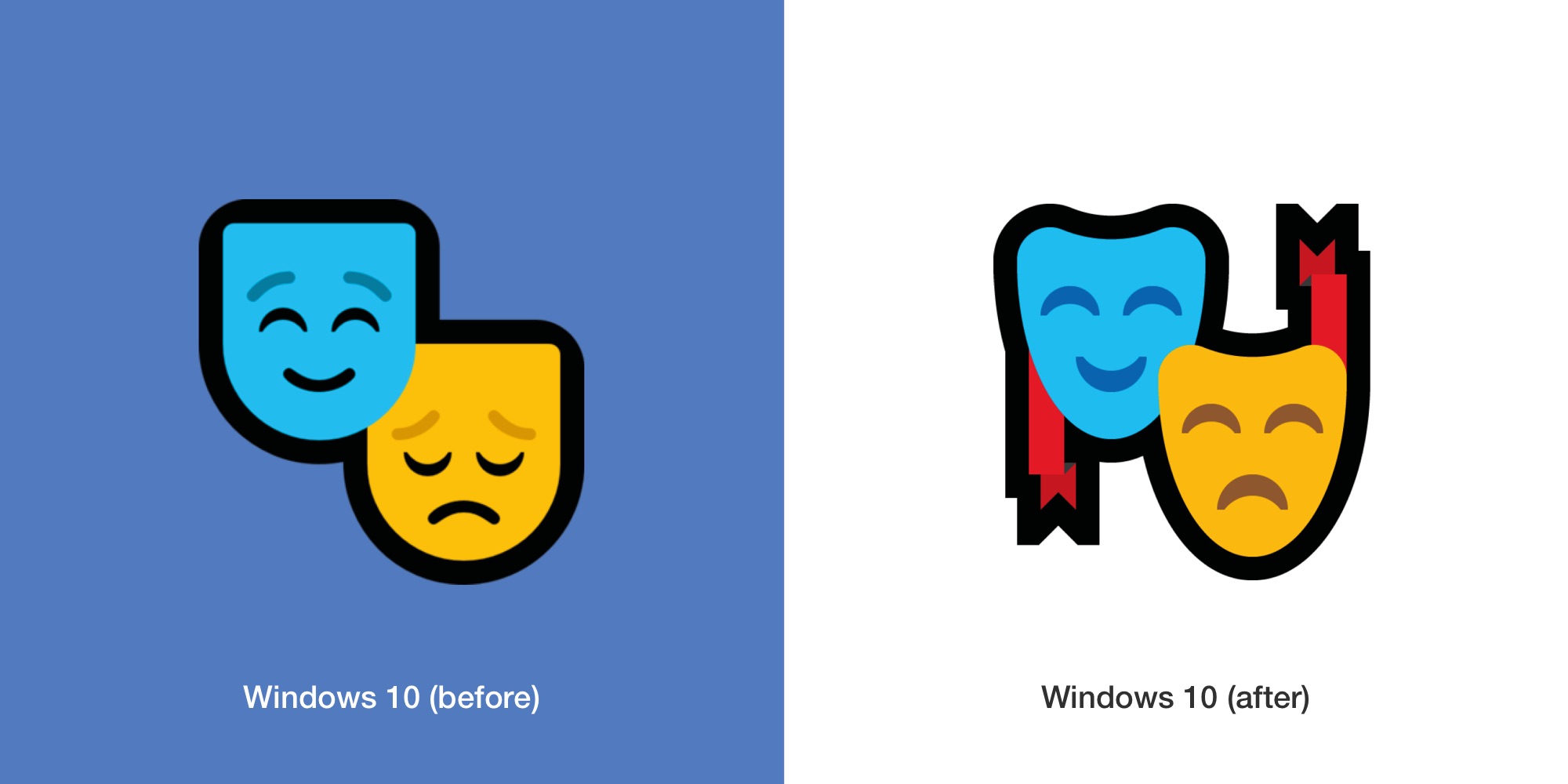 🥛 Glass of Milk now appears as a glass of milk instead of a bottle of milk with a straw.[3] 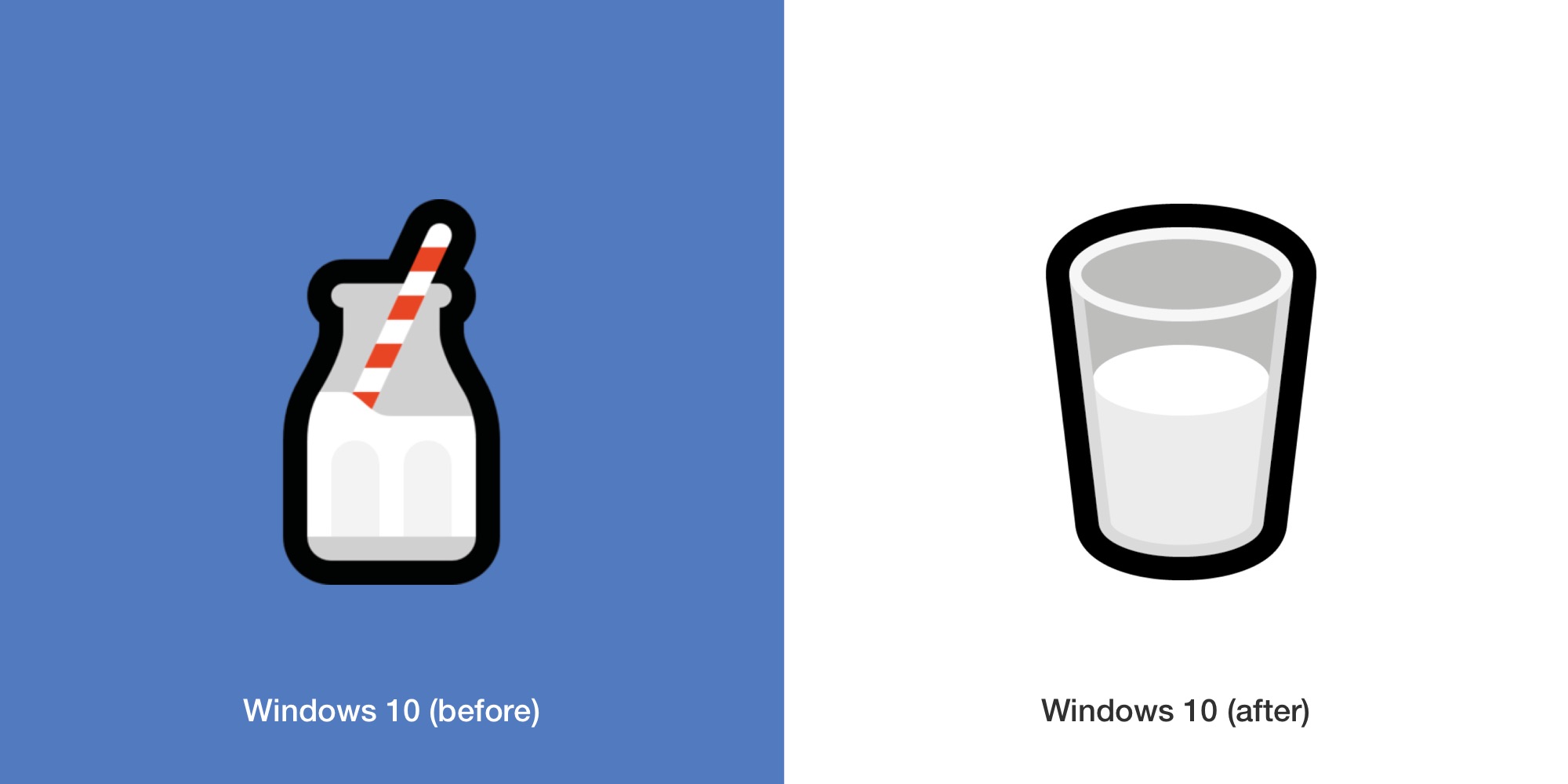 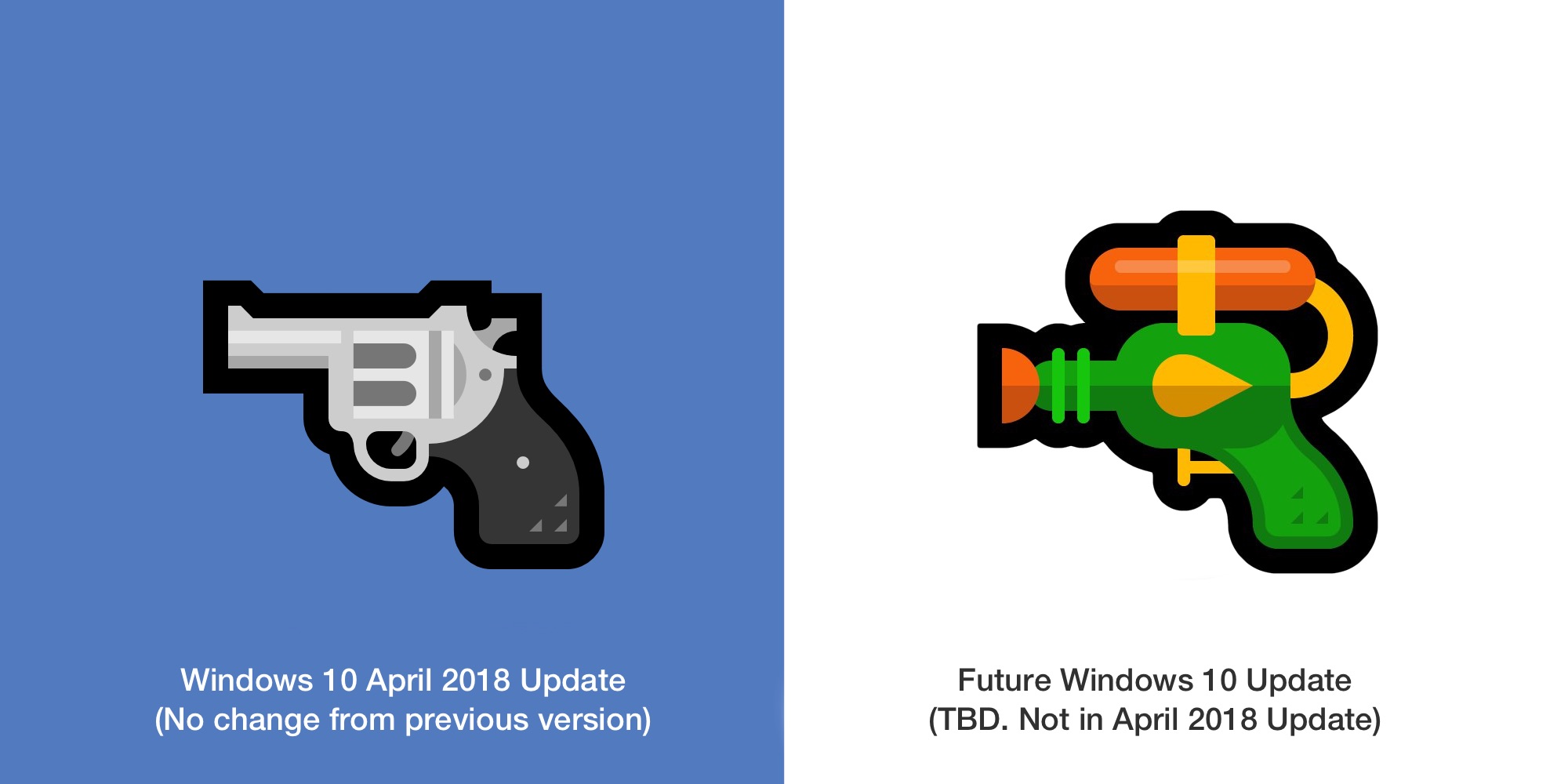 This new water pistol design is not included this Windows release. Given the timing of Microsoft's announcement, it's likely this change will come later in 2018.

Windows 10 April 2018 Update is out now, and users should start seeing the update rolling out over the coming days or weeks.