Over the past year, we've applied emoji data science to studying topics ranging from Brexit to the death of Fidel Castro to the true meaning of the peach emoji. (Hint: 🍑 almost never refers to the fruit.)

Naturally, for World Emoji Day, we wanted to go meta and look at the top emojis used throughout the day.

We turned to the Twitter Search API and downloaded English-language tweets mentioning #WorldEmojiDay on July 17. After removing retweets and deduplicating by user name, we ended up with a dataset of 40,123 tweets.[^1] 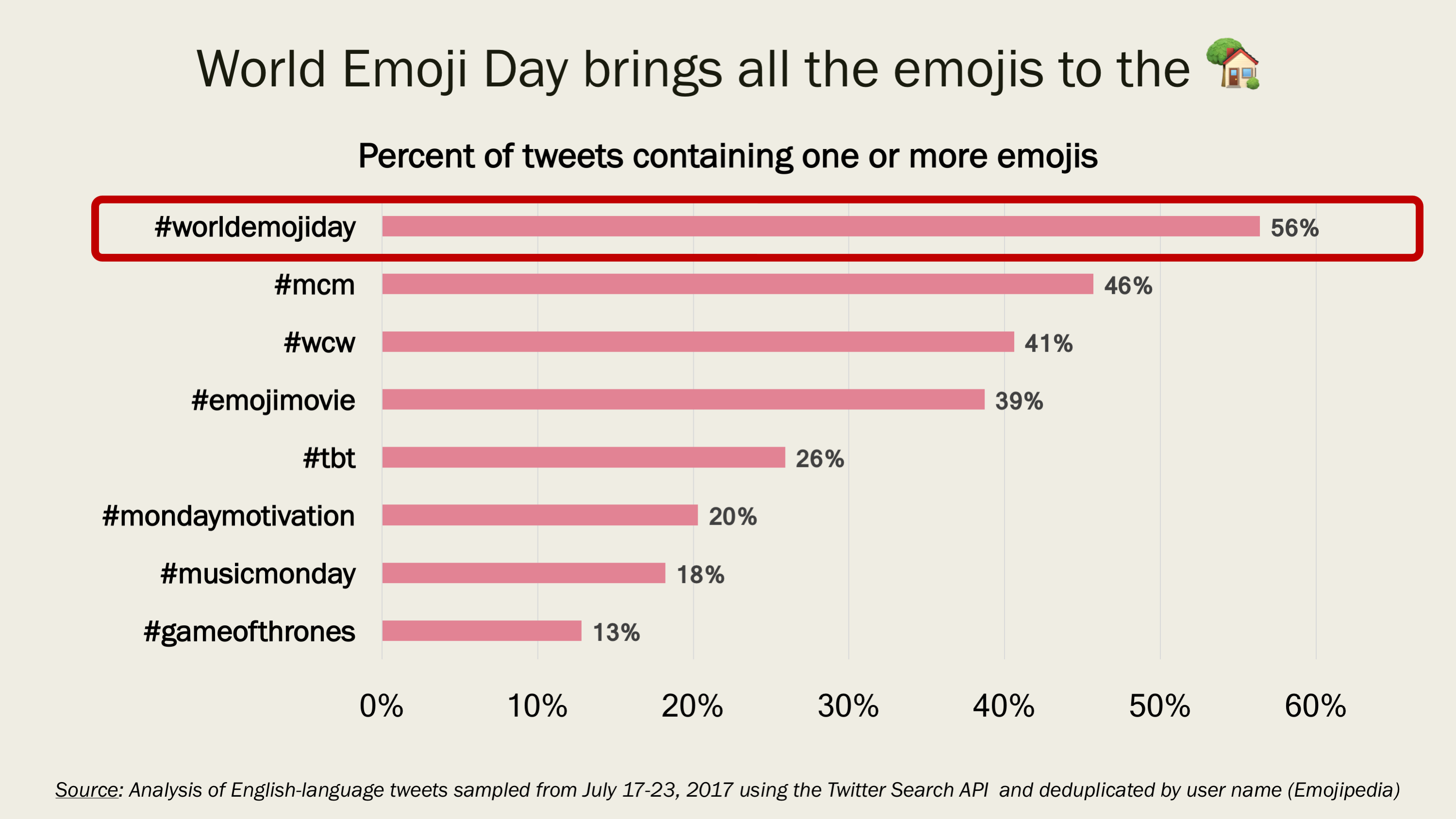 The first thing we notice is that World Emoji Day brings all the emojis to the yard.

A record 56% of tweets with the #WorldEmojiDay hashtag include one or more emojis. For reference, the percent of tweets including emojis is usually less than 20%, for a typical hashtag.

In order to make a more robust comparison, we also looked at seven other popular hashtags from last week to assess how commonly people used emojis with them. 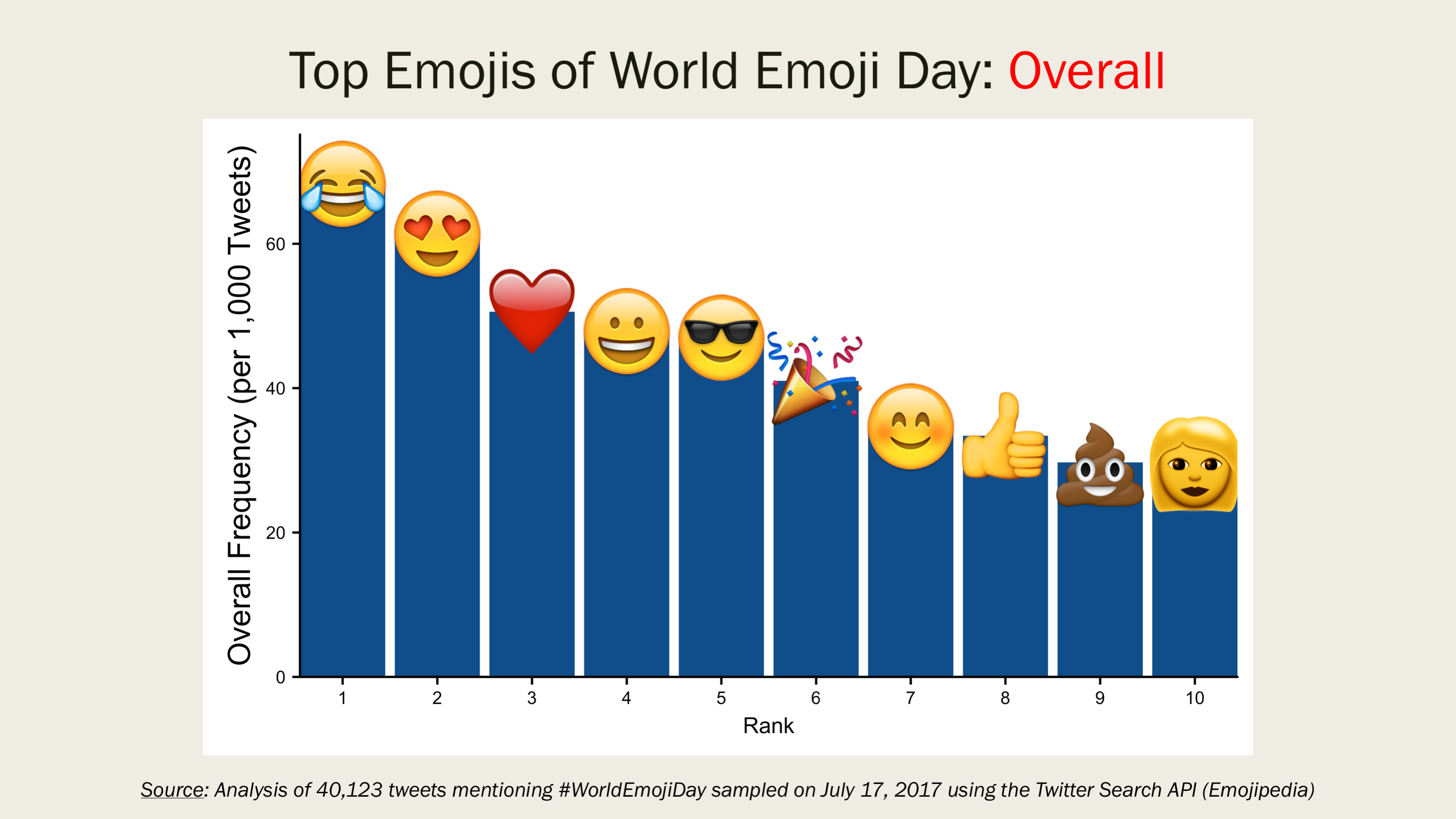 When looking at the most commonly used emojis in tweets mentioning #WorldEmojiDay the top results were:

Interestingly, 👩 Woman also makes the list in the tenth position. Due to the way Unicode codepoints are constructed, this reflects the frequent use of female-gendered emojis, e.g. 👩‍🔬 woman scientist, rather than the specific use of this exact emoji.[1]

How many different emojis does a tweet about #WorldEmojiDay typically have? 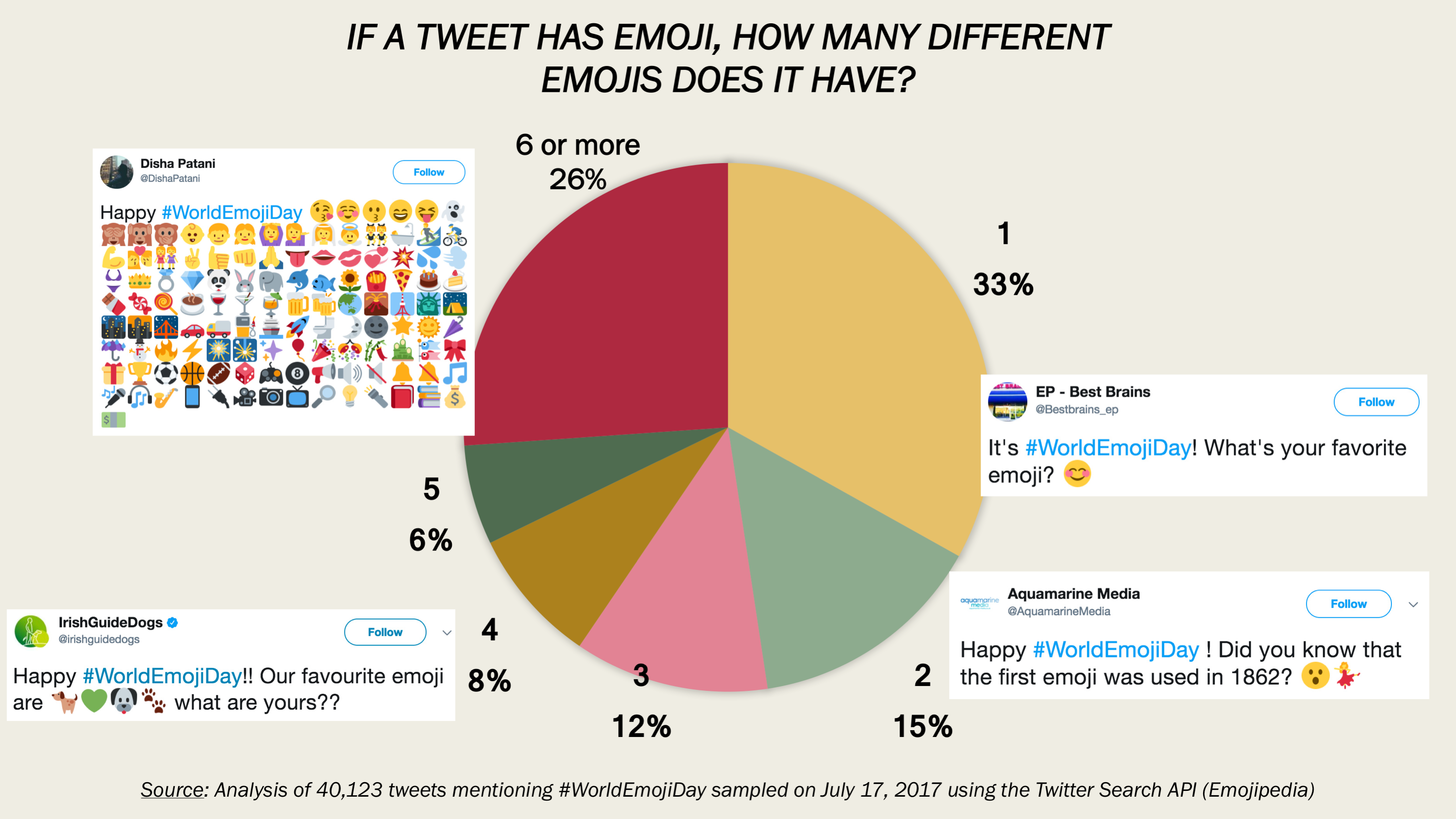 One third (33%) of tweets with emojis mentioning #WorldEmojiDay contain one distinct emoji, while another 15% contain two different emojis. The remaining 52% of tweets contain three or more unique emojis. Thus, we find that in contrast to typical emoji usage on Twitter - where emojis are often used to modulate emotions and replace specific words - on World Emoji Day, people are more likely to be a little extra in their emoji usage. In fact, over a quarter of tweets (26%) include six or more emojis!

Which tweet in our dataset has the most number of distinct emojis?

The above tweet, which in all fairness might be from a bot account, takes the 🎂 with 119 distinct emojis (!). Since the 140 character limit on Twitter applies to text and emojis, and #WorldEmojiDay takes up 14 characters, this is only a hair's width from the theoretical maximum of 126 emojis that is possible in a tweet in our dataset.

Are certain emojis more likely to be used by themselves versus in a sequence with other emojis? 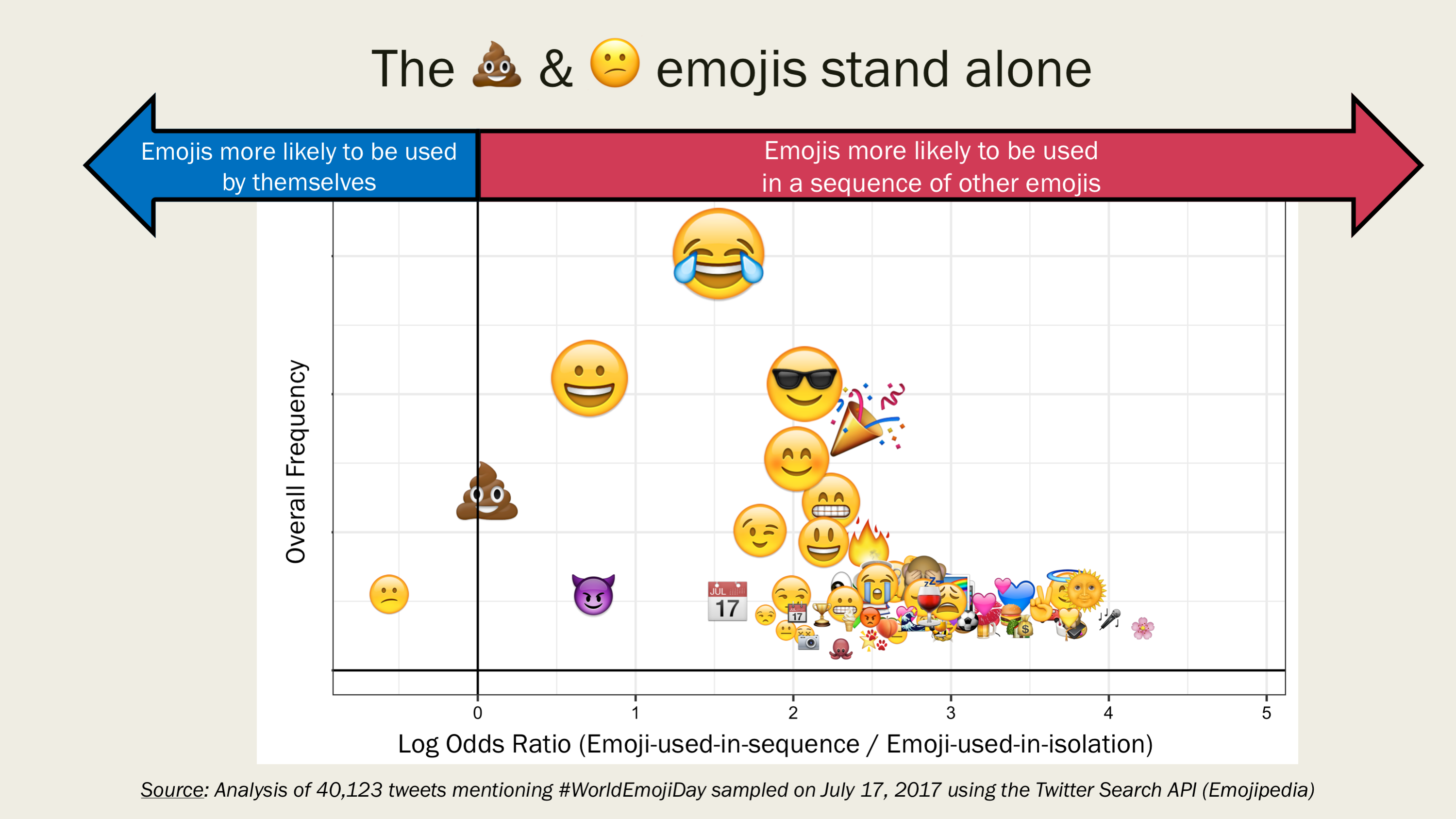 Why is 😕 used so often? We examined ten randomly selected tweets with this emoji and found eight of the ten were identical, auto-generated tweets about the upcoming Emoji Movie. For example:

The other two tweets were bemoaning the lack of the otter and redhead emoji, respectively.

And still no otter emoji. 😕#WorldEmojiDay

What about the 💩 emoji? Four of ten random tweets we examined contained this identical copy referencing the Emoji Movie:

The remaining six tweets used 💩 to express lack of excitement about World Emoji Day. For example:

Finally, we look at the top emojis used on World Emoji Day broken down by Unicode's official breakdown of emoji categories. 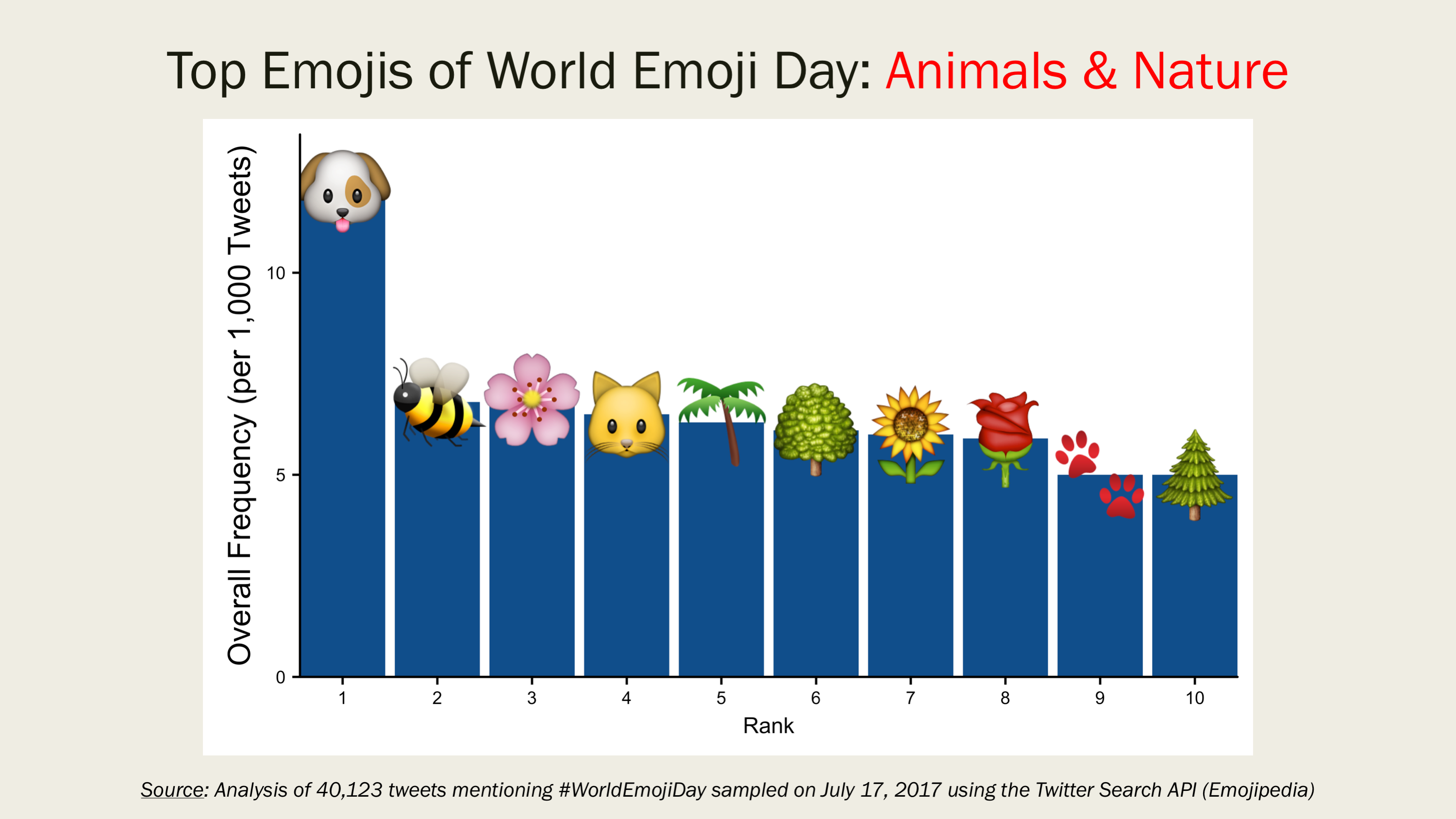 The top emojis in the animals & nature category are 🐶 dog face, 🐝 honeybee, and 🌸 cherry blossom. For example:

All is well with the world when flowers are involved 🌸🌸🌸 #worldemojiday pic.twitter.com/2jAIfBM9LH

We we were surprised at the lack of cat faces in this plot, and then we remembered: Unicode doesn't consider cat faces to be part of the Animals & Nature category at all 🤦🏽‍♀️!!! Rather, they're included as a subcategory called cat faces under Smileys & People.

Here, presented for the first time on the internet, are the top cat face emojis of #WorldEmojiDay: 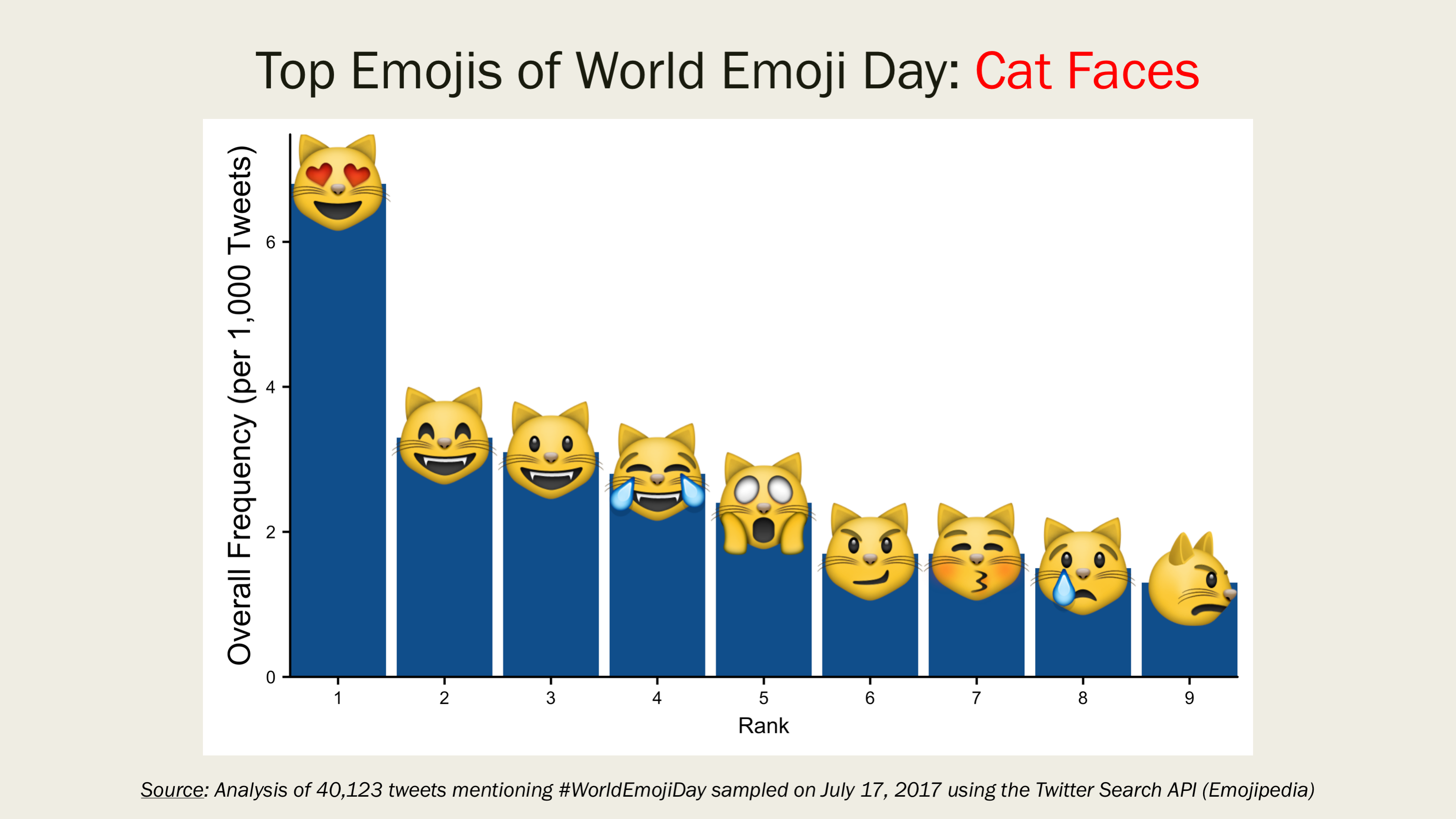 Contrary to human face emojis, where we typically observe an ordering of tears of joy, heart eyes, smiling face, with cat face emojis, we find 😻 heart eyes emoji reigns supreme, followed by 😸 grinning face and 😺 smiling face, and in fourth position, 😹 tears of joy. Perhaps one day, cat emoji data scientists will reveal some hidden meaning behind these patterns of data. 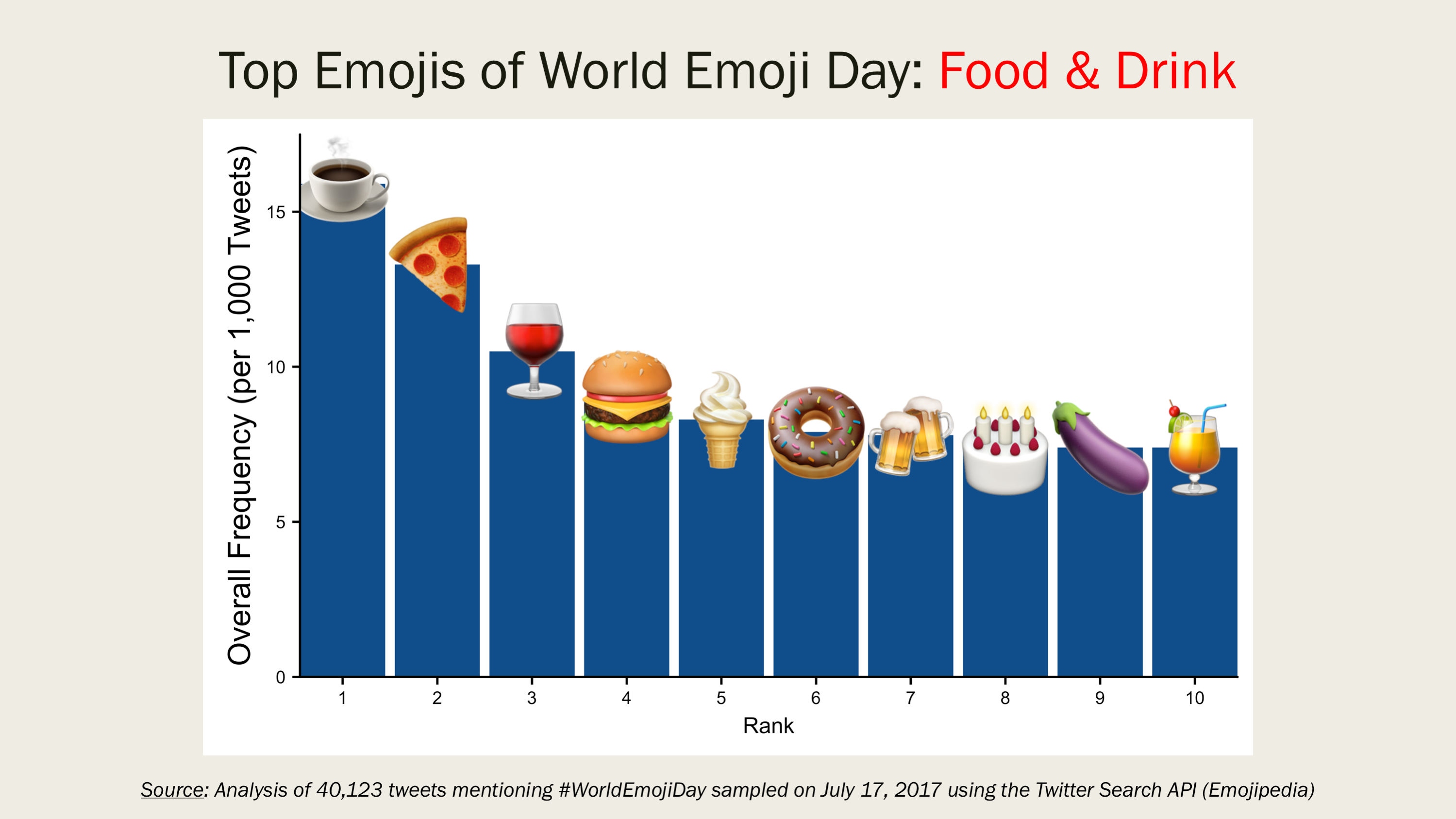 The coffee emoji - which is actually called ☕ hot beverage - is the most commonly used food & drink emoji, followed by 🍕 pizza and 🍷 wine glass. Usage includes people talking about their favorite foods as well as advertising by brands.

#WorldEmojiDay ☕️ I like Mondays, but regardless of the day, I need a good ol' cup of coffee to get me started!

It's #WorldEmojiDay, so cheers to the only emoji that means anything to me and my life: 🍕🍕🍕🍕🍕🍕 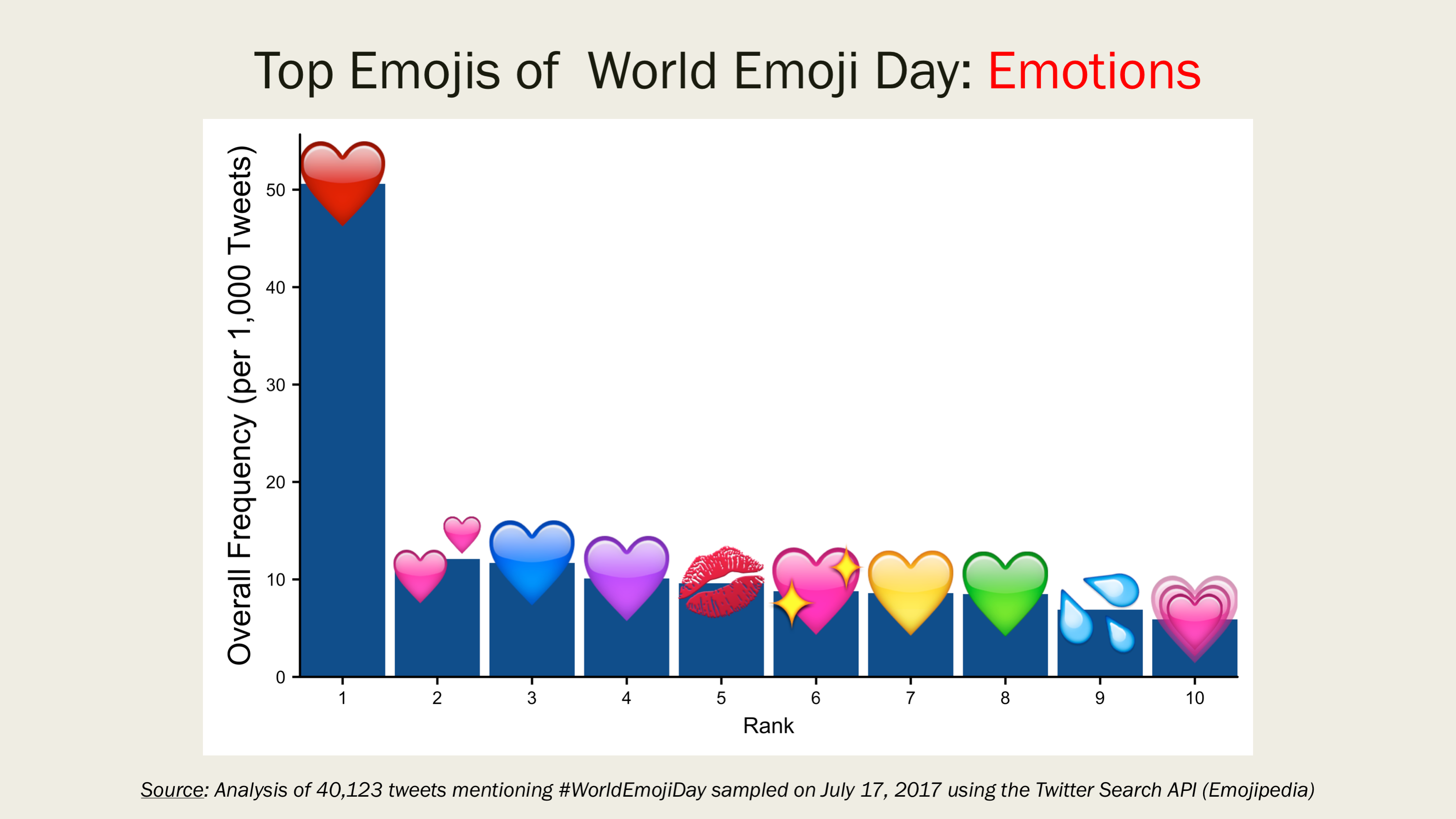 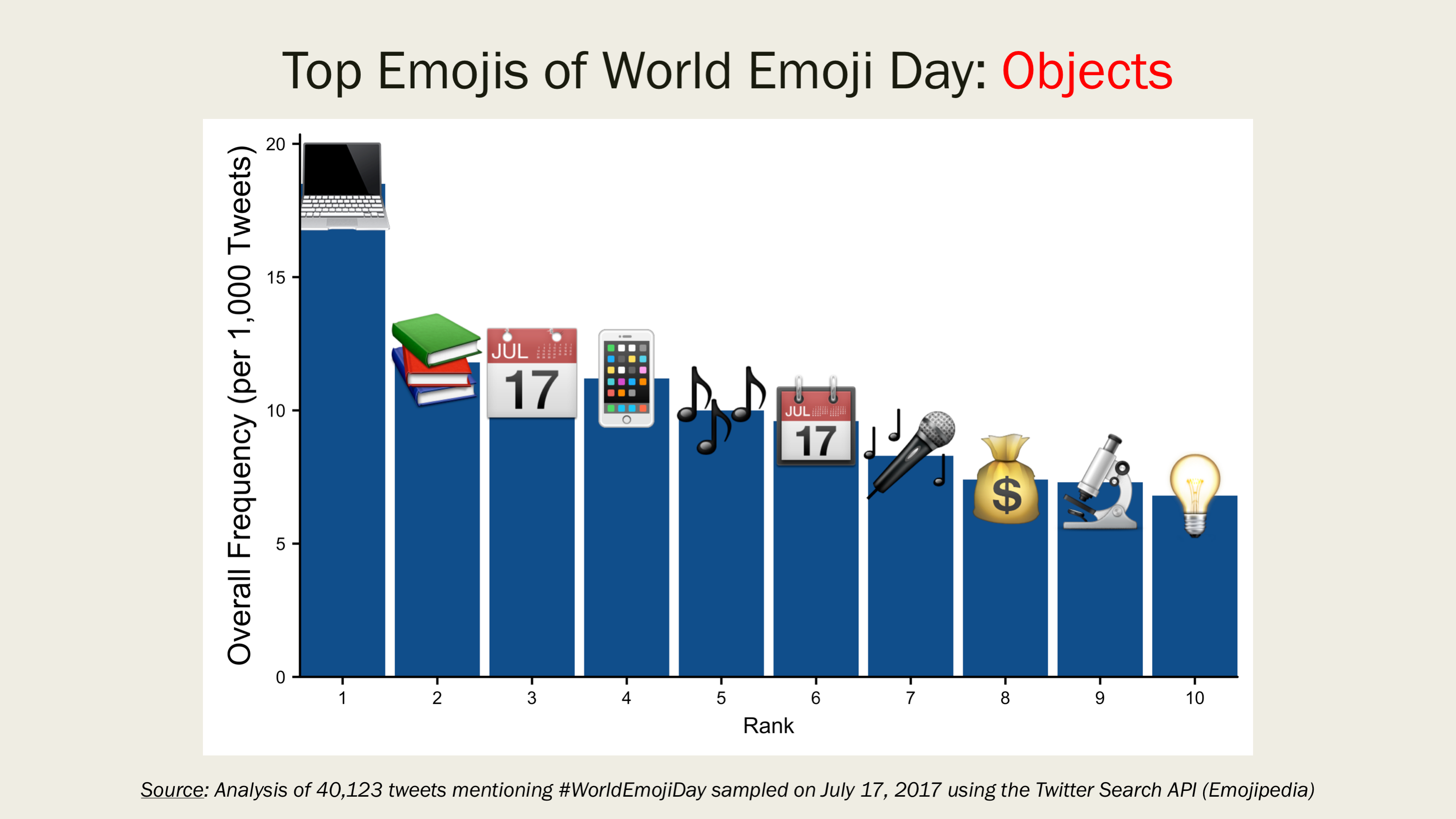 The top object emojis are 💻 laptop computer, 📚 books, and 📅
calendar. 📆 tear-off calendar also makes the list! (Yes, there are actually three different calendar emojis.) The calendar emojis are apt because they explicitly indicate July 17th[2] and provided the inspiration for the founding of World Emoji Day. For example:

#WorldEmojiDay is my fav bc the emoji is actually today's date 📅

#WorldEmojiDay? Is that why this date was chosen for the calendar emoticon? 📆 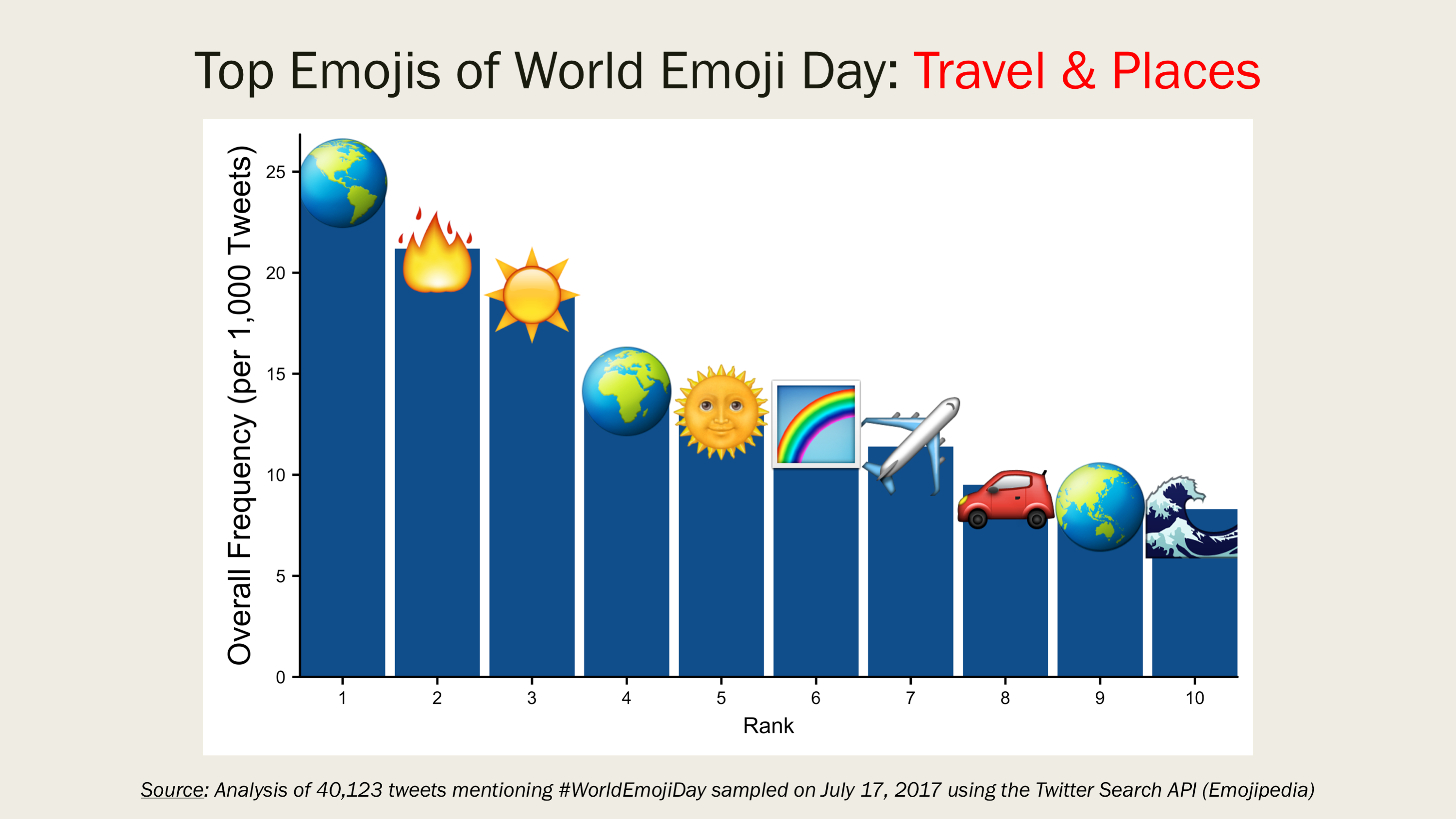 The top travel & places emojis are 🌎 globe showing Americas, 🔥 fire, and ☀️ sun. Fascinatingly, two of the other globes also show up in the top 10, with 🌍 globe showing Europe-Africa in fourth place, and 🌏 globe showing Asia-Australia in ninth place.

At first glance, one might hypothesize that the ordering of the three globe emojis reflects the frequency of tweets about #WorldEmojiDay across the Americas, Europe-Africa, and Asia-Australia. This may be partially true; however, many tweets with the latter two emojis appear to be US-based as well, suggesting some people might use the different globes interchangeably, either accidentally or on purpose. For example:

For #worldemojiday vote for your favorite #conservation emoji! 🌍 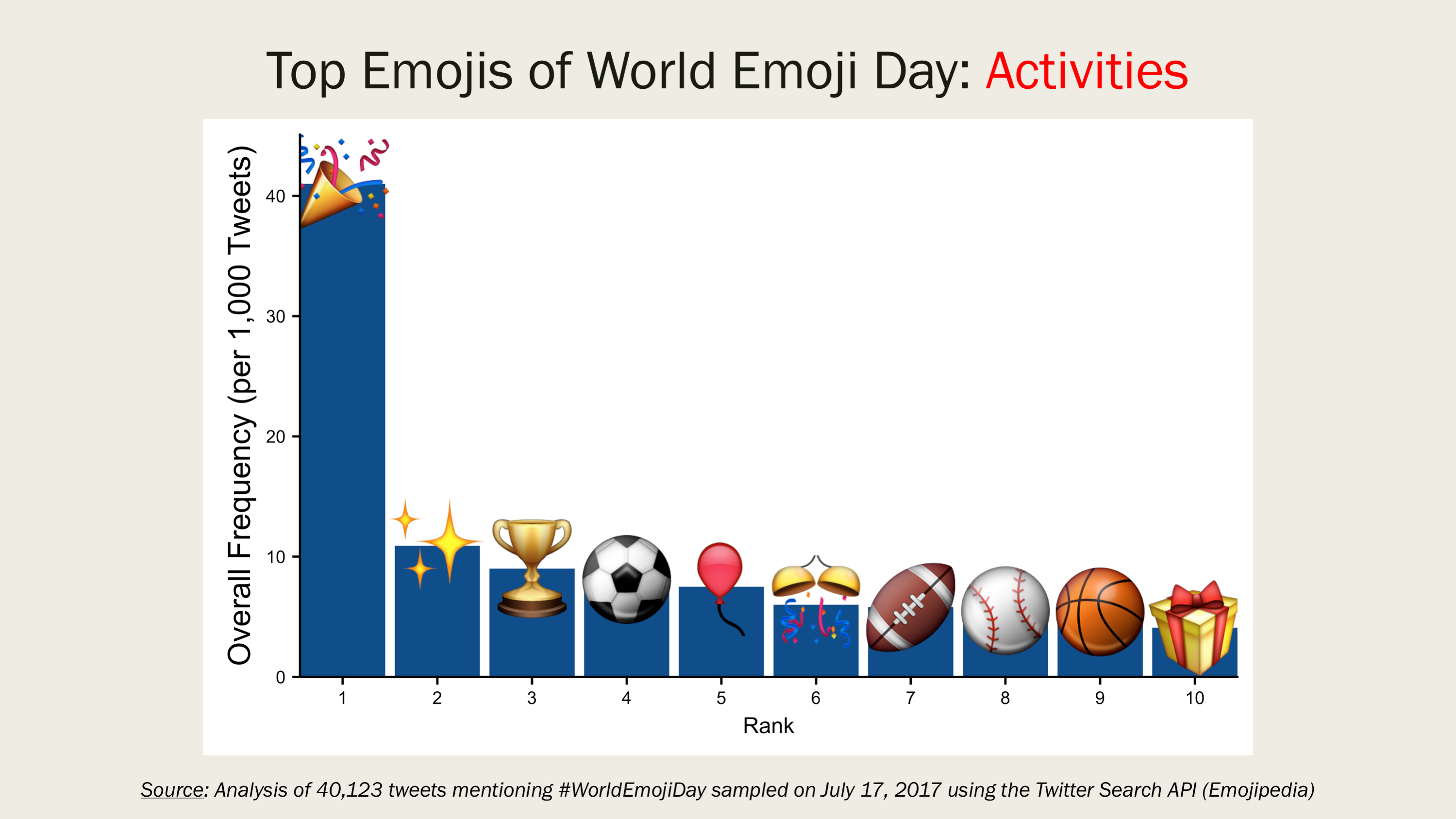 The top activities emoji by a strong margin is 🎉 party popper, which makes sense given the celebratory air around World Emoji Day. Interestingly, ⚽ soccer ball, 🏈 American football, ⚾️ baseball, and 🏀 basketball also show up in the top ten. Most of these are used by various sports teams and enthusiasts to commemorate World Emoji Day, for example:

[^1]: You can find the raw data referenced in this piece [here](https://github.com/PRISMOJI/emojis) as well as a tutorial to get you started with emoji data science in [here](https://prismoji.com/2017/02/06/emoji-data-science-in-r-tutorial/).