For the longest time, Samsung phones had an emoji quirk that resulted in two emojis being mixed up.

These obscure characters don't even show on the default emoji keyboard. They are the Regional Indicator Characters that are used to create flag emojis. For instance 🇬 🇧 is used as the codes to create 🇬🇧 Flag: United Kingdom and 🇧 🇷 is used to create 🇧🇷 Flag: Brazil.

Now in 2020 this has been fixed. Samsung devices updated to version 2.0 of Samsung OneUI  (or above)  will see the correct letter for each of these.

🇻 Regional Indicator Symbol Letter V also now correctly shows the letter V in the 2020 updates, instead of U.

Samsung has a history of odd emoji quirks. From the six-digit fingers crossed emoji to the happy 🙄 Face with Rolling Eyes in 2016, most of these have been fixed over the years.

This regional indicator emoji bug is far more obscure than previous issues, and has also now been fixed. Who said nothing good is happening in 2020?

Thanks to Emojipedia reader Micah Garnett for pointing this out. 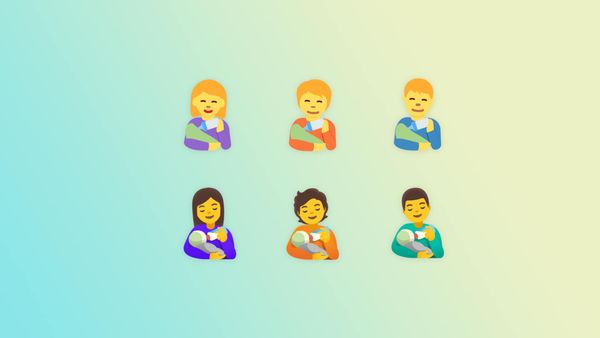 In fall 2020, a new baby is coming to town. That baby is the swaddled and bottlefed bundle in Person Feeding Baby, and that town is your emoji keyboard. Above: Person, woman, and

New emojis will be approved in late 2020, resulting in platform support in 2021. With Unicode 14.0 delayed due to Coronavirus, a minor emoji release known as Emoji 13.1 will fill