The emoji keyboard is mostly universal, but some vendors have final say over which characters appear in which regions on each device.

iPhone users in China are missing one specific emoji on their emoji keyboard that shows on all others: 🇹🇼 Flag for Taiwan.

Why? At the time Apple added this emoji to iOS 9 in 2015, Adam Pasick of Quartz wrote:

“The Beijing government and many Chinese citizens fiercely object to any reference to Taiwan’s sovereignty. China protested to the US government in January [2015] when Taiwan dared to raise a flag above its de facto embassy in Washington, and singer Katy Perry raised hackles among mainland Chinese fans when she wore the Taiwanese flag as a cape during an April performance in Taipei.”

The flag for Taiwan not just hidden from the keyboard on Chinese iPhones, it can't be shown at all. Sending this emoji to an iOS device in China will result in a missing character box[2] where the flag displays for others.

This dates back to at least 2017, but it's not clear if this were the case when the Taiwan flag was first added to iOS. The same removal of the emoji applies to all of Apple's platforms in China: iOS, macOS, tvOS and watchOS.

Above: The 🇹🇼 Taiwan flag emoji as shown in iOS Notes with the region set to United States (left) and China (right).

Incidentally, when iOS first added new flag support in 2015, the flag for Taiwan was one of the last to appear.

In one iOS 9 beta, the flag for Taiwan was a placeholder that just showed an ellipsis (…) on the keyboard where this flag would have gone. 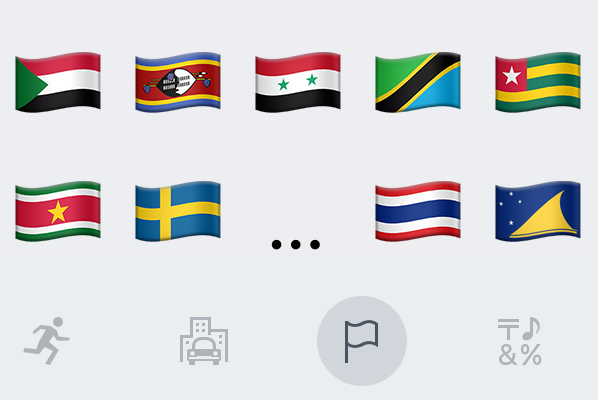 Above: Taiwan had a placeholder on the emoji keyboard in an earlier iOS beta.

In hindsight, this may have been either testing the regional implementation for hiding this in China, or simply a late decision about whether to include the flag at all.

We weren't able to test a stock Android phone with the region set to China to determine if Google hides the flag for Taiwan under these conditions.

Samsung has been known to get involved in its own emoji geopolitics, having changed the 🎌 Crossed Flags emoji from Japanese flags to South Korean flags in 2015.

In 2016 Samsung removed the 🎌 Crossed Flags emoji altogether, along with 🗾 Map of Japan and 💹 Chart Increasing With Yen.

Above: Samsung has been known to change Japan-specific emojis on its devices.

These were put back on Samsung phones with non-Samsung emoji designs in 2017, and with a new Samsung emoji font in 2018.

Windows doesn't support support country flag emojis in any region (they show as two-letter country codes instead), however there is one emoji that Microsoft hides from their emoji picker in Windows 10.

See if you can spot it: 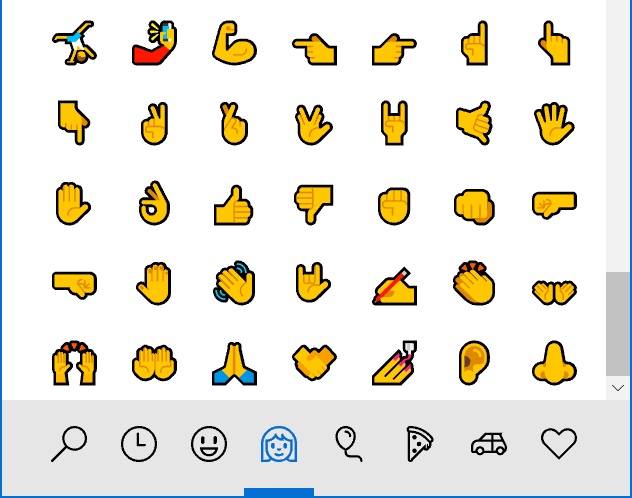 Above: The middle finger is a standard Unicode character emoji that is supported by Windows, but not shown in the emoji picker interface.

That's right, the 🖕 Middle Finger emoji is offensive enough to be blurred on US network television and to be removed from the list of displayed gestures on Windows devices.

Have you noticed an emoji that appears in one region, but not another? Let us know.