You know how the rest goes. Moderation stuggles to keep up. Bad faith arguments ensue. Within hours the evidence is reported and removed. But then what?

It's where we hear the usual tried and tested lines:

The playbook continues. Racists find innocuous uses of the monkey or monkey face emoji, and claim that the people standing up against racism are in fact the 'real racists'.

It's the same old story re-purposed and re-used to discredit and exhaust. It's tiring, but in the absence of clear information, misinformation thrives.

Here's your quick guide to whether the monkey emoji is racist. 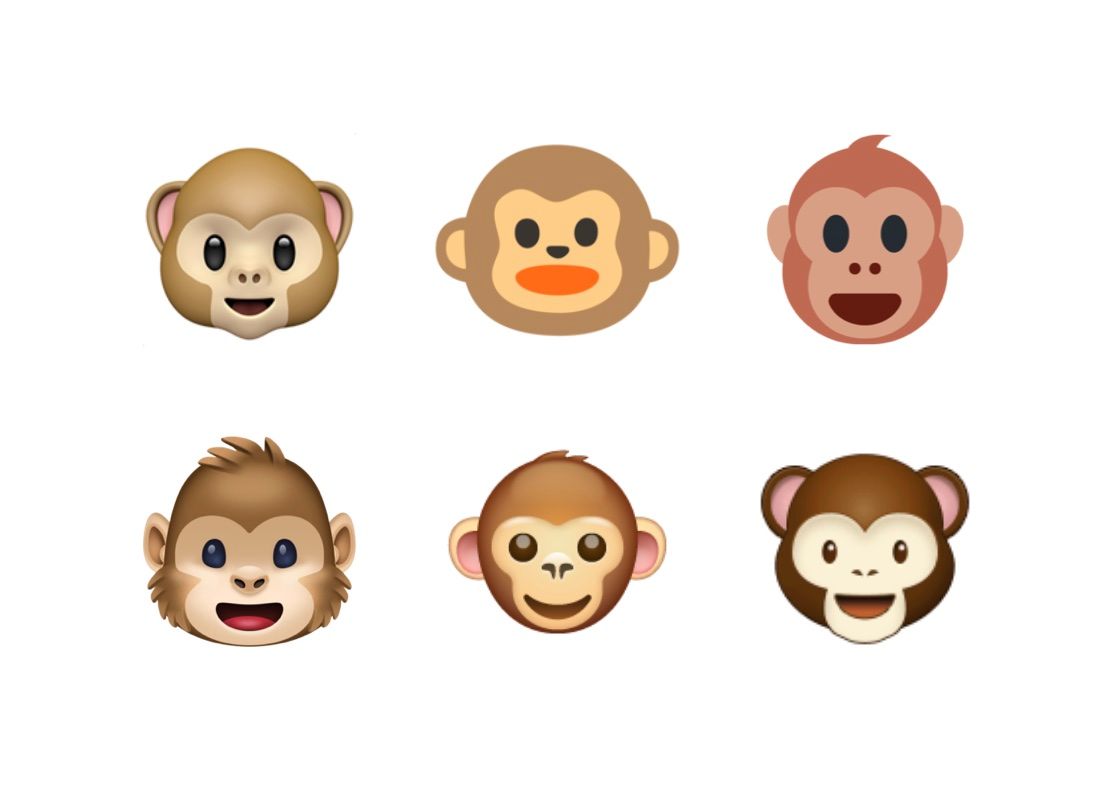 Above: 🐵 Monkey Face has been used as a form of racist abuse on social media platforms. Image: Vendor designs / Emojipedia composite.

Is the monkey emoji racist?

In the context of sending a monkey emoji to a Black footballer, yes.

There is a long history of Black people being referred to as monkeys or apes by white people. This is rooted in white supremacy. It's dehumanizing and it's racist. It's impossible to separate the monkey emojis from this long-standing racist trope when they're used to disparage, insult, and abuse Black people.

Oh so the monkey emoji is always racist?

I can't handle context. Yes or no: is the monkey emoji racist?

If you can't handle context, this is going to be a challenging conversation.

Every written sentence, every spoken word, and every typed emoji has a different meaning depending on the context.

The monkey emoji isn't racist in isolation, but it can be in many contexts.

Should I stop using the monkey emoji?

If you're talking about actual animals, for example, you've just visited the zoo, that's a perfect time to use these emojis.

It's the context, not the emoji itself, that can be a problem. There's no need to start banning animal emojis in all contexts.

Where this gets trickier is the fact that three useful expressions are standardized in the emoji set as monkeys. These are:

The three wise monkeys proverb is well known, and by itself is not problematic.

The area this could stray into difficulty is using 🙈 See-No-Evil Monkey in a harassing way. Without context clues, commenting 🙈🙈🙈 on a footballer's instagram, could be a cheeky embarrassment, or it could be racist. The context of who sent it and who received it can be the difference.

People acting with the intention to harass other online relish edge cases that there can be no simple rule that any given emoji is good or bad.

If you feel that the three expressive monkeys might be unwelcome in your online communications, consider using the following:

I don't have a good alternative to suggest for 🙉 Hear-No-Evil Monkey, but there are plenty of expressive faces to represent "I didn't want to hear that" in a playful manner.

Should the monkey emoji be banned?

There will be, and have been, calls for the monkey emoji to be banned.

When it comes to social media platforms, it makes sense that harassment of any kind should be moderated. Removed. Restricted. That's different to removing this animal from the emoji keyboard or emoji fonts themselves.

This isn't the first, and won't be the last time that emojis are used in a way to harass, or to evade online moderation or censorship.

The only consistent rule is that context matters, and you should be wary of anyone arguing that it doesn't.