Following the death of George Floyd and subsequent Black Lives Matter protests against racism and police brutality, Emojipedia experienced a signification increase in lookups of the ✊🏿 Raised Fist with Dark Skin Tone emoji.

Emulating the historic gesture of support and solidarity, this emoji has a long-standing association with the Black Lives Matter movement.

Emojipedia has conducted an analysis of the raised fist emoji along with related emojis and hashtags, to better understand the response to this trajedy and the ensuing conversation online.

To conduct this analysis we collected a sample of 278,244 tweets that included "Black Lives Matter" and "BLM" either as a hashtag or as a text string. 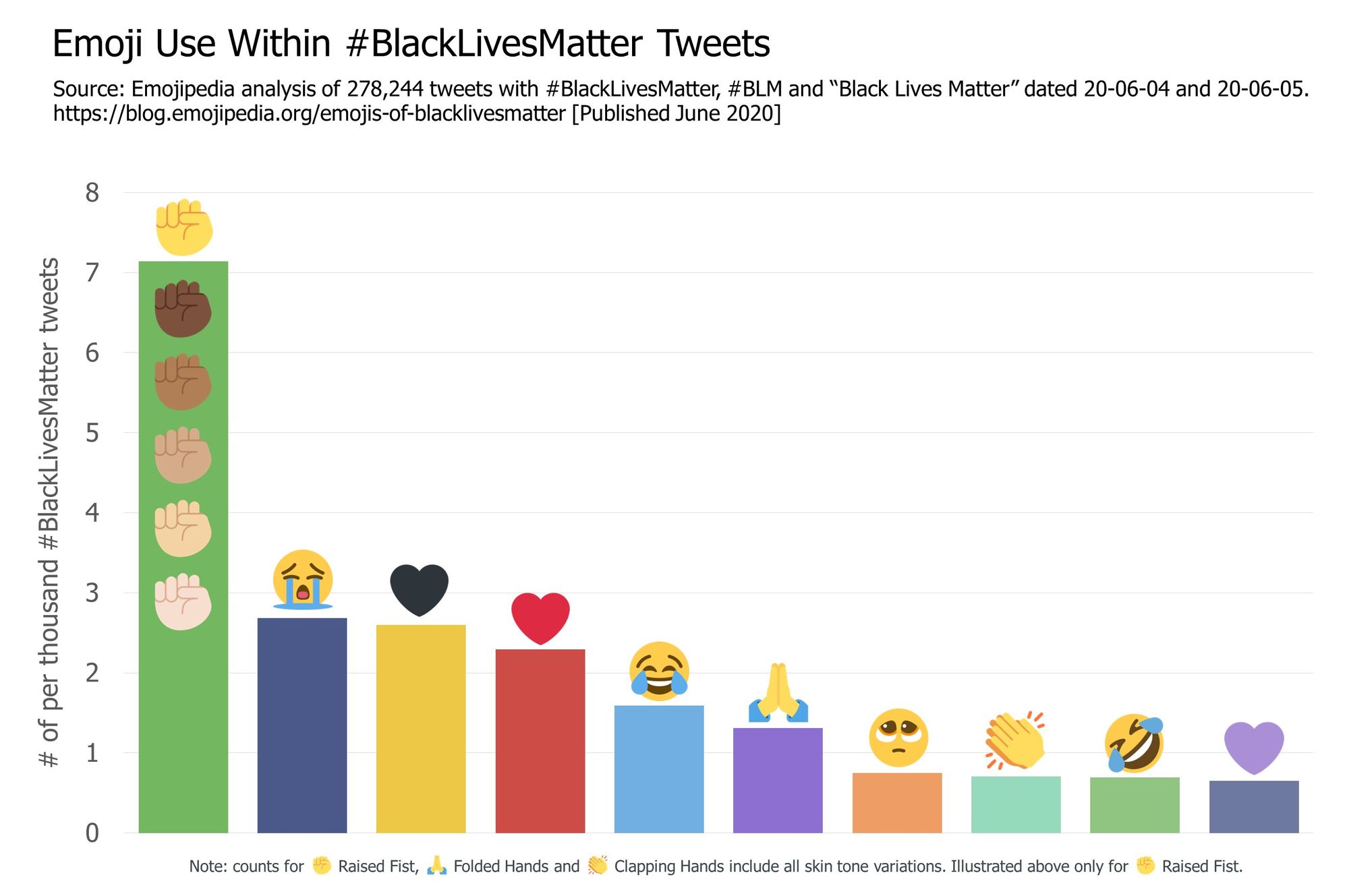 Above: the top ten most frequently used emojis on our sample of 278,244 Black Lives Matter tweets.

Across these ten emojis we see clear themes of solidarity, support, and sadness.

The ✊ Raised Fist emoji was the most popular emoji used. This data combines all skin tone variations for any relevant emoji into a single entry, why may explain the considerably higher usage numbers for this emoji.[2] Read on for details of the breakdown of skin tone usage for this emoji.

The second most common emoji, 😭 Loudly Crying Face, appears less than half as often in these tweets as any raised fist.

🖤 Black Heart can be used as a symbol of solidarity and support for and amongst black communities. ❤️ Red Heart and 💜 Purple Heart compound this expression of support.

The presence of 😂 Face with Tears of Joy and 🤣 Rolling on the Floor Laughing may at first appear odd, but these two emojis are well-documented as being amongst the most popular on the platform, and are commonly found across almost any sample of tweets, due to their considerable popularity.

🙏 Folded Hands is often used alongside expressions of hope and longing, and also recently saw an increase in use correlated with the spread of coronavirus.

The skin tone variations that make up the use of ✊ Raised Fist within #BlackLivesMatter tweets shows the darkest two skin tones making up the majority of use (52% combined). 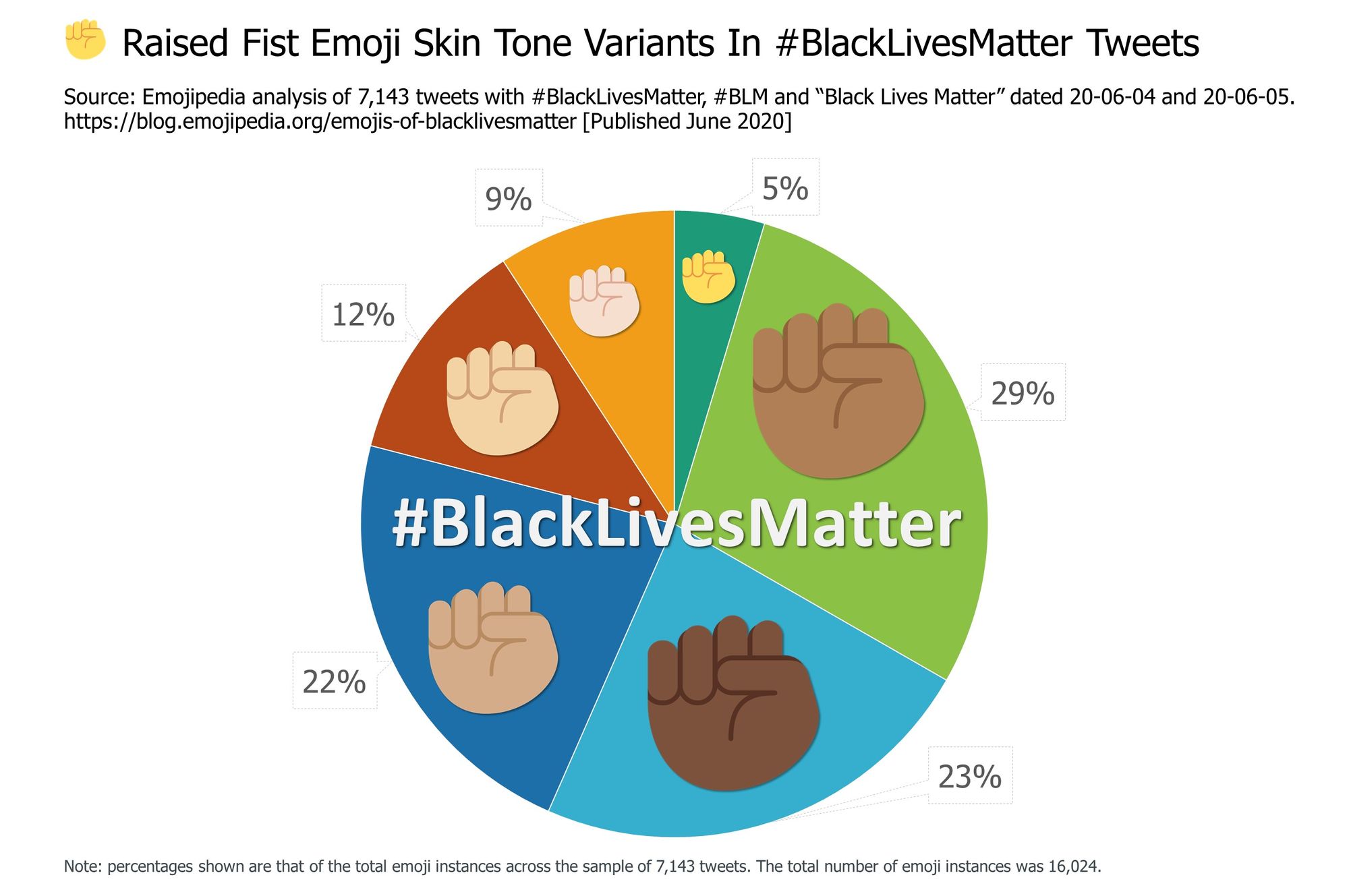 Above: Use of each skin tone variant of the ✊ Raised Fist emoji within Black Lives Matter tweets.

In descending popularity within the Black Lives Matter sample of tweets:

When compared to a general tweet sample, the difference is notable. In a general sample of 13 million tweets, 18,408 included at least one ✊ Raised Fist emoji, with 71% being the neutral yellow version, which appears when no skin tone is specified. 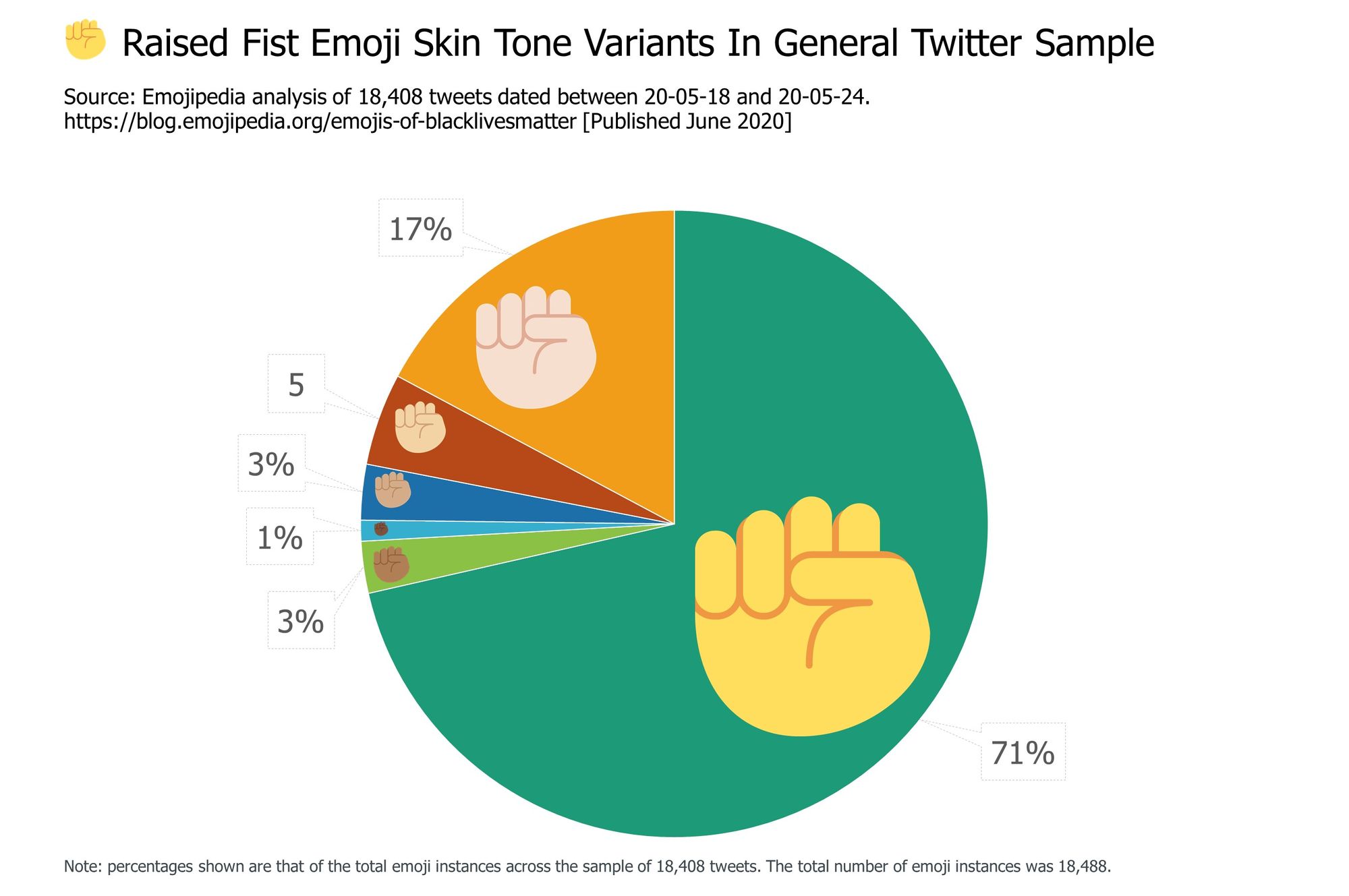 Above: ✊ Raised Fist use on Twitter, for a general sample of tweets.

This general sample uses tweets collected by Emojipedia between the 18th and 24th of May 2020.

The difference between the Black Lives Matter sample and the general sample is considerable, indicating the value of emoji skin tone modifiers in self-expression and representation in digital communications.

In a further analysis we investigated which emojis saw a significant jump in popularity within the Black Lives Matter sample compared to a general sample of tweets.

Any emojis which did not experience at least 1,000 usage instances[3] within this general sample have been excluded. 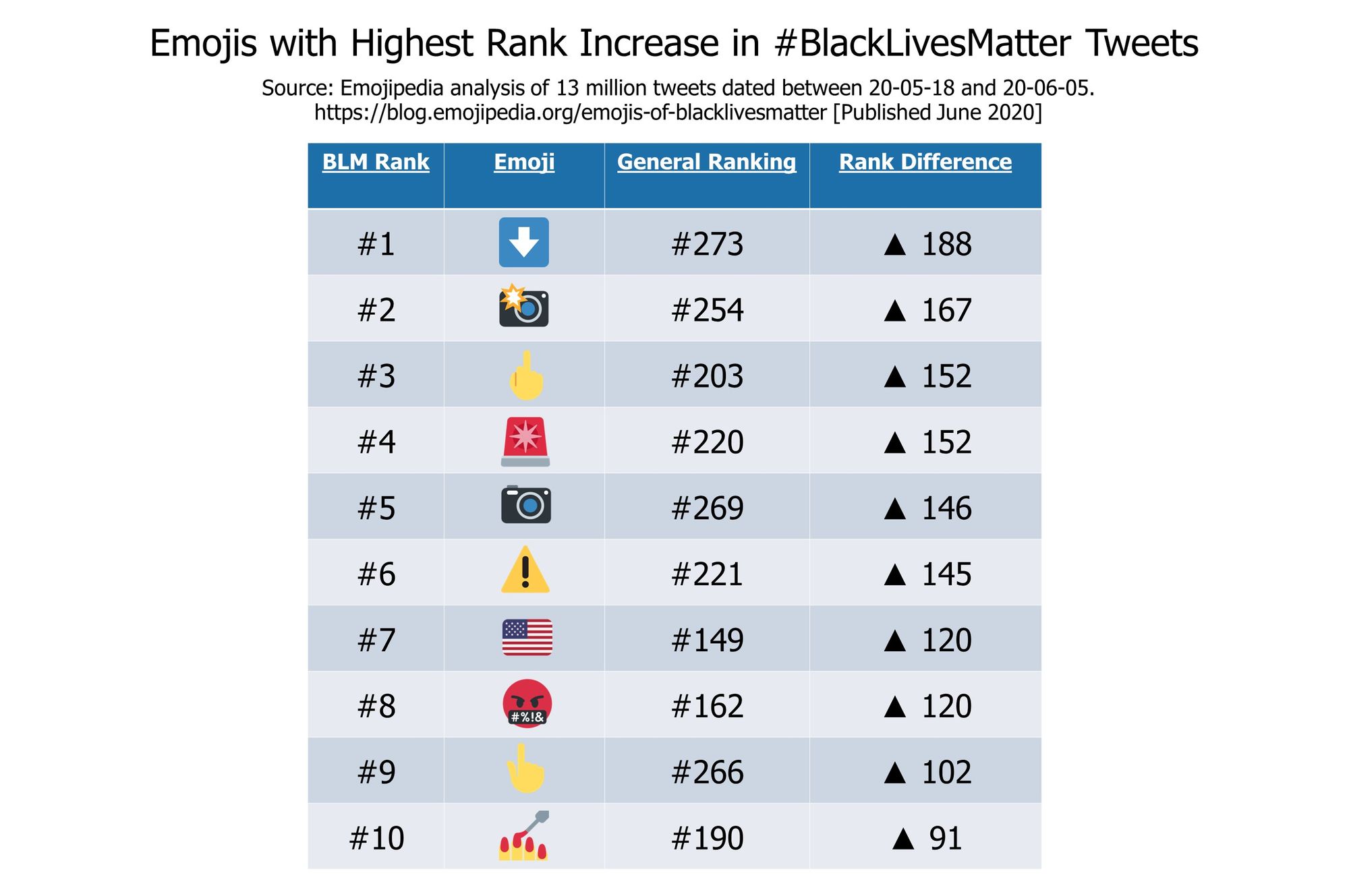 Above: a table displaying emojis which saw the largest increase in relative popularity in our Black Lives Matter sample of tweets.

The increase in use of ⬇️ Down Arrow emoji appears due to information sharing on Twitter. The arrow pointing downwards commonly seen pointing to additional content such as an image, a video or a link to another website. 👆 Backhand Index Pointing Up performs a similar function for content in a previous tweet or within the tweet itself.

The presence of both 📸 Camera with Flash and 📷 Camera indicate the sharing of footage from the protests on Twitter, or an encouragement to protesters to film their experience.

🚨 Police Car Light and ⚠️ Warning emojis are often used when sharing messages of alert or caution, while the increase in use of both the 🖕 Middle Finger and 🤬 Face with Symbols on Mouth are clearly evidence of frustration and anger.

Recent polling from Civiqs shows a considerable increase in support of Black Lives Matter from US voters.

This is notable, and should be reflected in our conversations on Twitter. 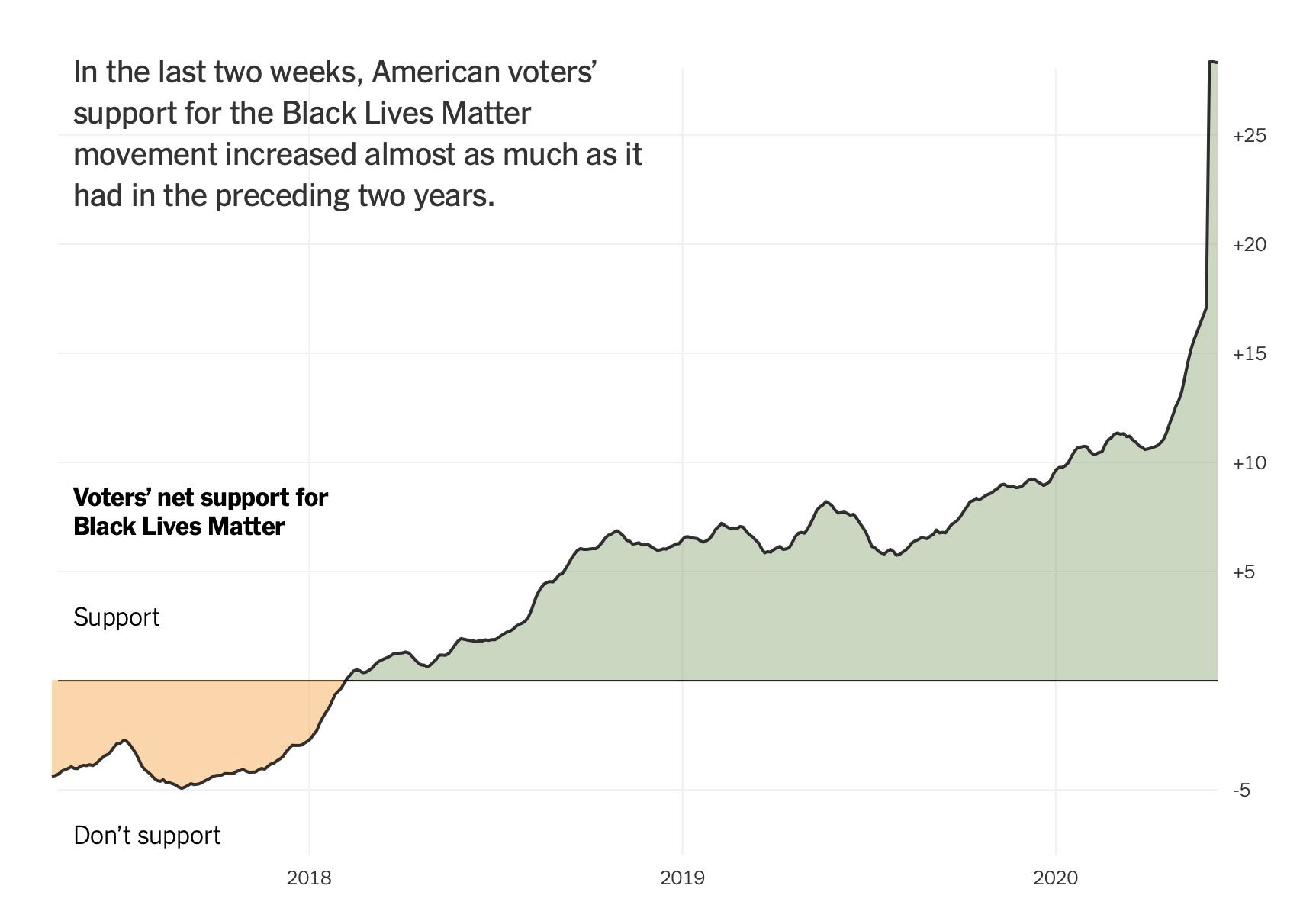 Above: US Voter Support for Black Lives Matter. Source: Civiqs image via The New York Times.

To understand the context of this increased support, we investigated which words and emojis are commonly used in tweets that include ✊🏿 Raised Fist: Dark Skin Tone, 🖤 Black Heart and the various 👮 Police Officer emojis.

Use of ✊🏾 Raised Fist: Medium-Dark Skin Tone and ✊🏿 Raised Fist: Dark Skin Tone began to rapidly increase around the 29th of May, the date on which a third degree murder charge was initially filed against former Minneapolis police officer Derek Chauvin.

Both then peaked in use on the 2nd of June, the day after two separate autopsies ruled that George Floyd’s death was a homicide. 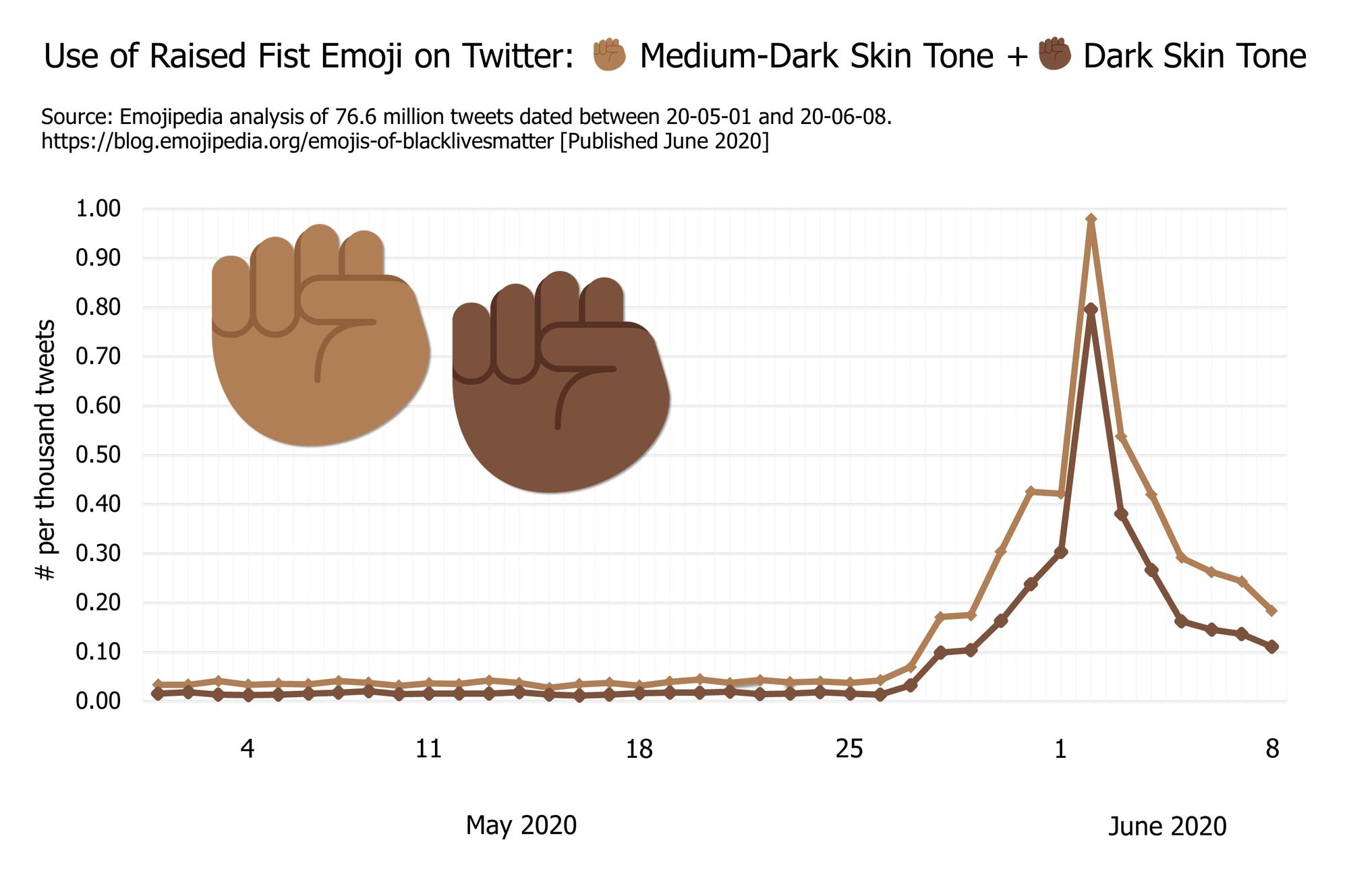 Above: Use of the raised fist emojis with dark skin tones increased considerably on Twitter in late-May to early June 2020.

In tweets that include ✊🏾 or ✊🏿, the most common words all relate directly to Black Lives Matter.

Words and phrases that stand out include Justice For George Floyd, No Justice No Peace, Breonna Taylor, and love. 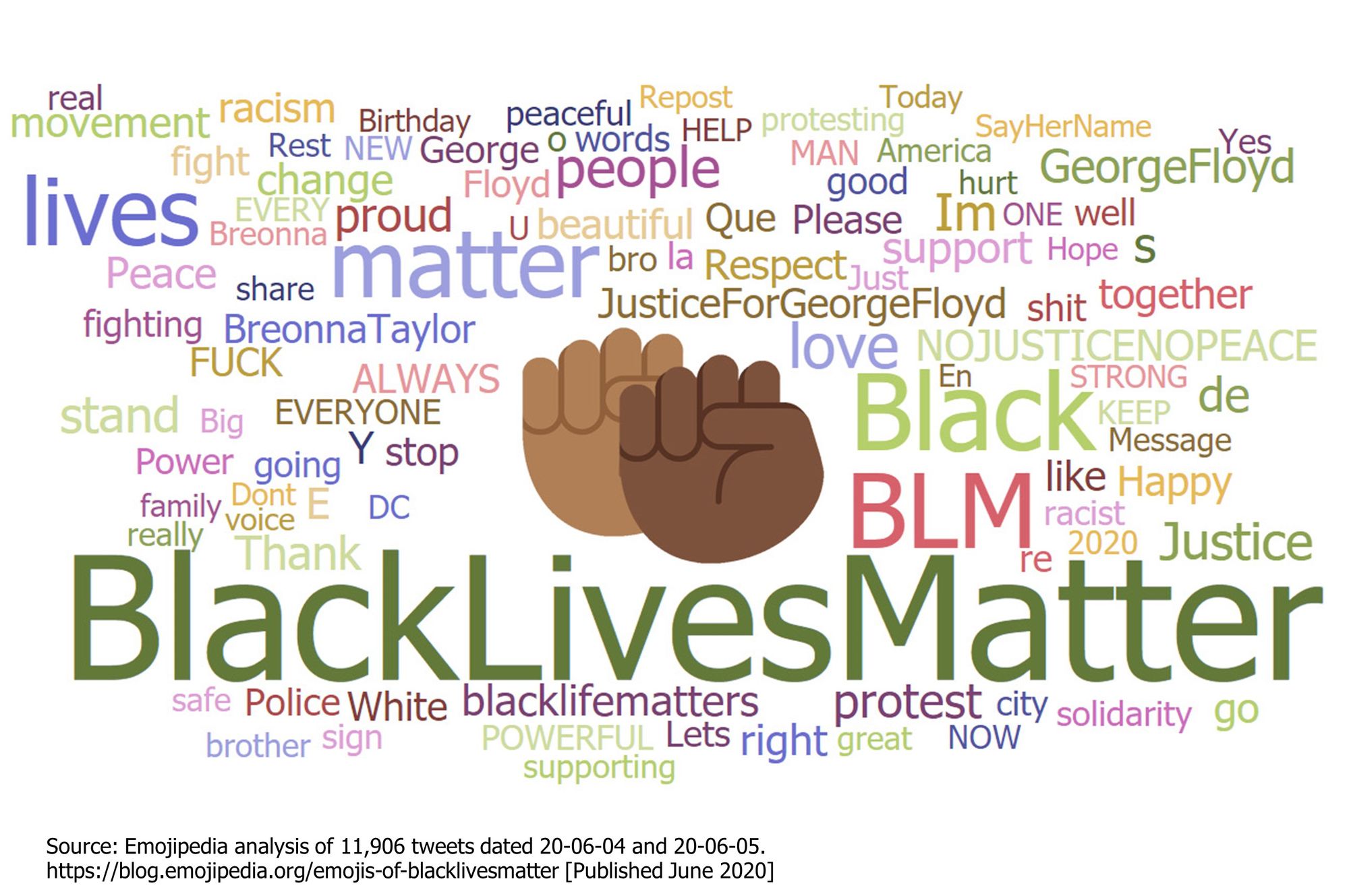 Above: Word Cloud of the terms most associated with ✊🏾 and ✊🏿 within a sample collected on the 4th and 5th of June 2020.

On average, tweets that include ✊🏾 or ✊🏿 also include one or more of the following emojis: 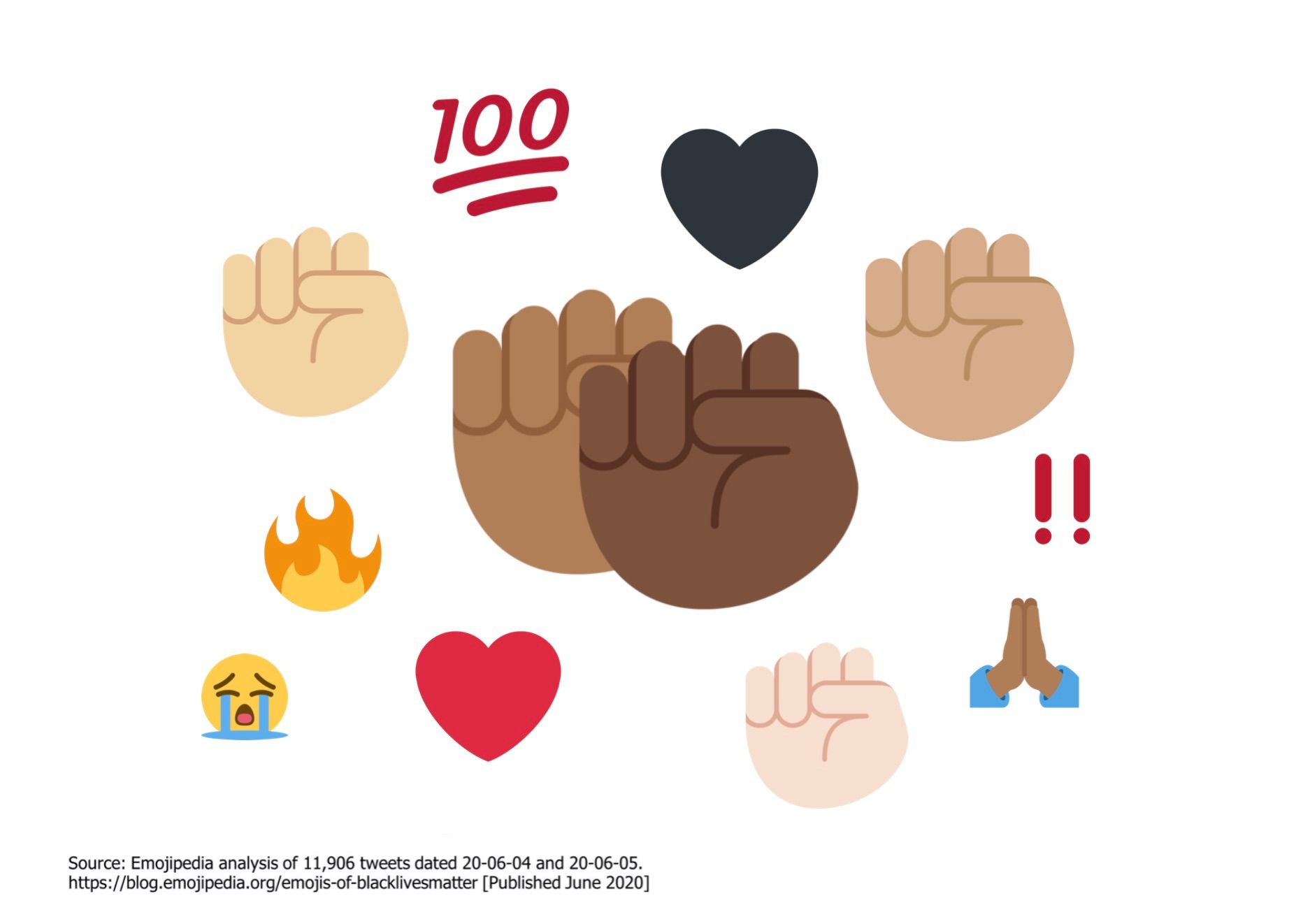 As with the ✊🏾 and ✊🏿, use of 🖤 Black Heart peaked on the 2nd of June. The change in use of this emoji is not as pronounced as the raised fists. 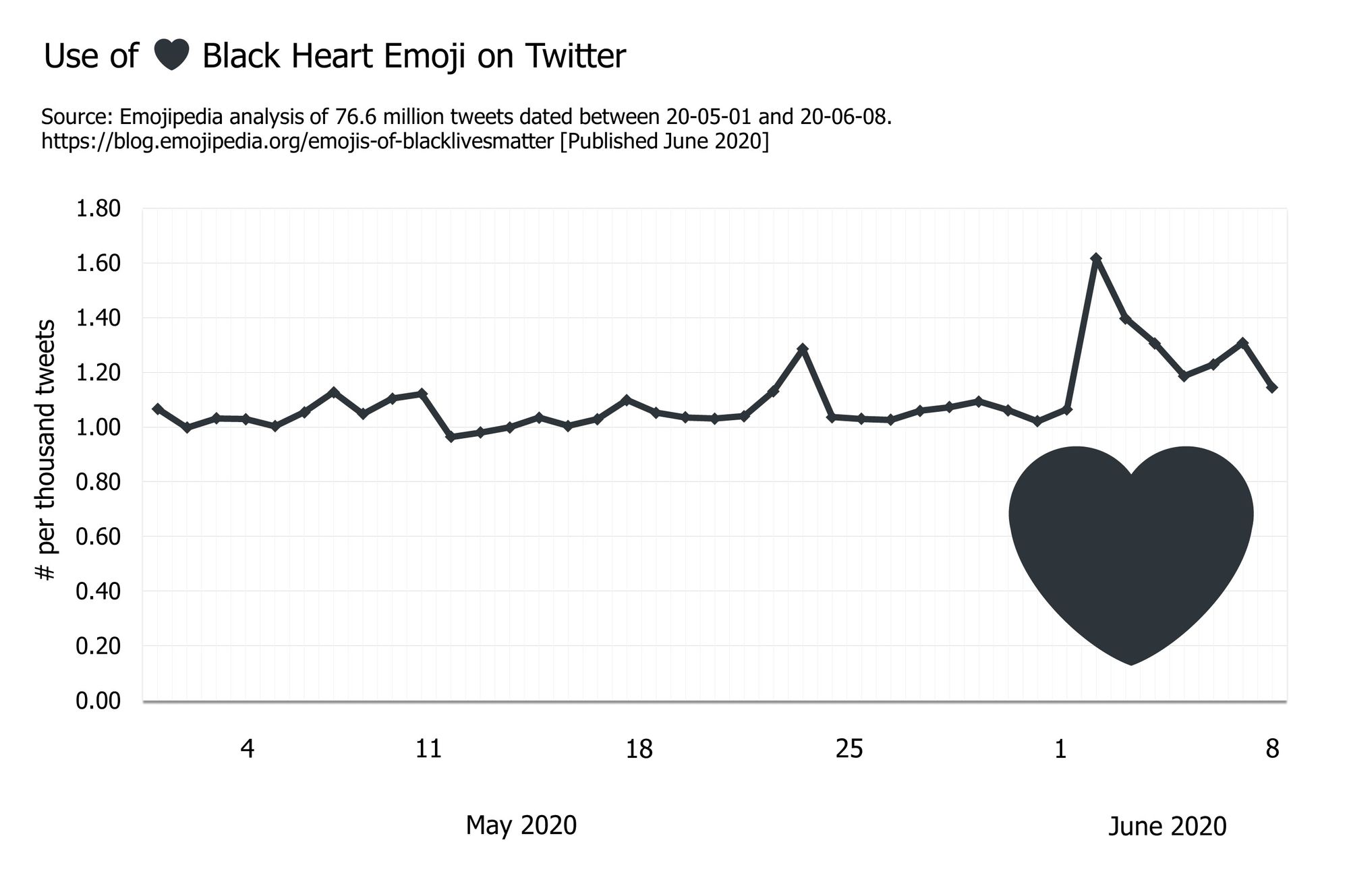 It's worth noting that regular use of the black heart (as seen in early May) is similar to the peak of the black or brown fist in early June. Twitter is a large platform, and many tweets are sent daily with this emoji that have no relevance to Black Lives Matter.

Having said that, the most commonly found phrase in tweets using the 🖤 Black Heart emoji on the 4th and 5th of June 2020 is Black Lives Matter. 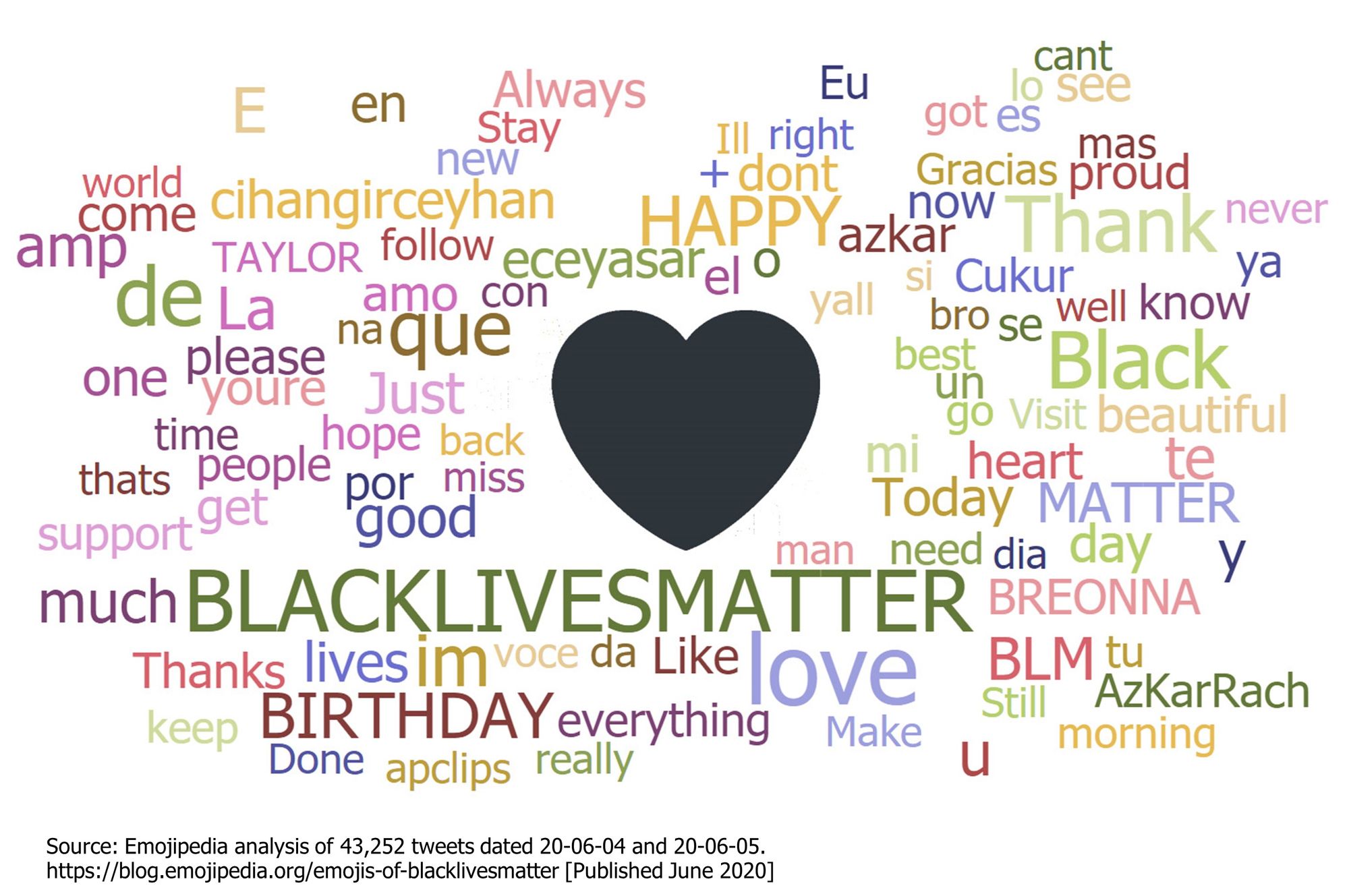 Above: Terms most associated with the 🖤 Black Heart emoji within a sample collected on the 4th and 5th of June 2020.

Emojis commonly found within this 🖤 Black Heart tweet sample are:

The presence of the other heart emojis such as the ❤️ Red Heart and 💙 Blue Heart alongside the 🖤 Black Heart is an expected finding.

Heart emojis, like other shape emojis, are often used in colourful combination for aesthetic purposes including the celebration of LGBTQ identity. June is LGBTQ Pride month in the United States in commemoration of the Stonewall Riots of 1969, at which the black transgender woman Marsha P. Johnson played a key role.

Notably, the 👮 Police Officer emoji - or any of its gender and skin tone variations - wasn't common within #BlackLivesMatter tweets.

Given the nature of protests, and ensuing police violence, the absense of this emoji within online discussion seemed curious.

Although use of 👮 Police Officer emojis did jump on the 25th of May, the day of George Floyd’s death, this increase was not outside the normal range of usage experienced by these emojis over the last month. 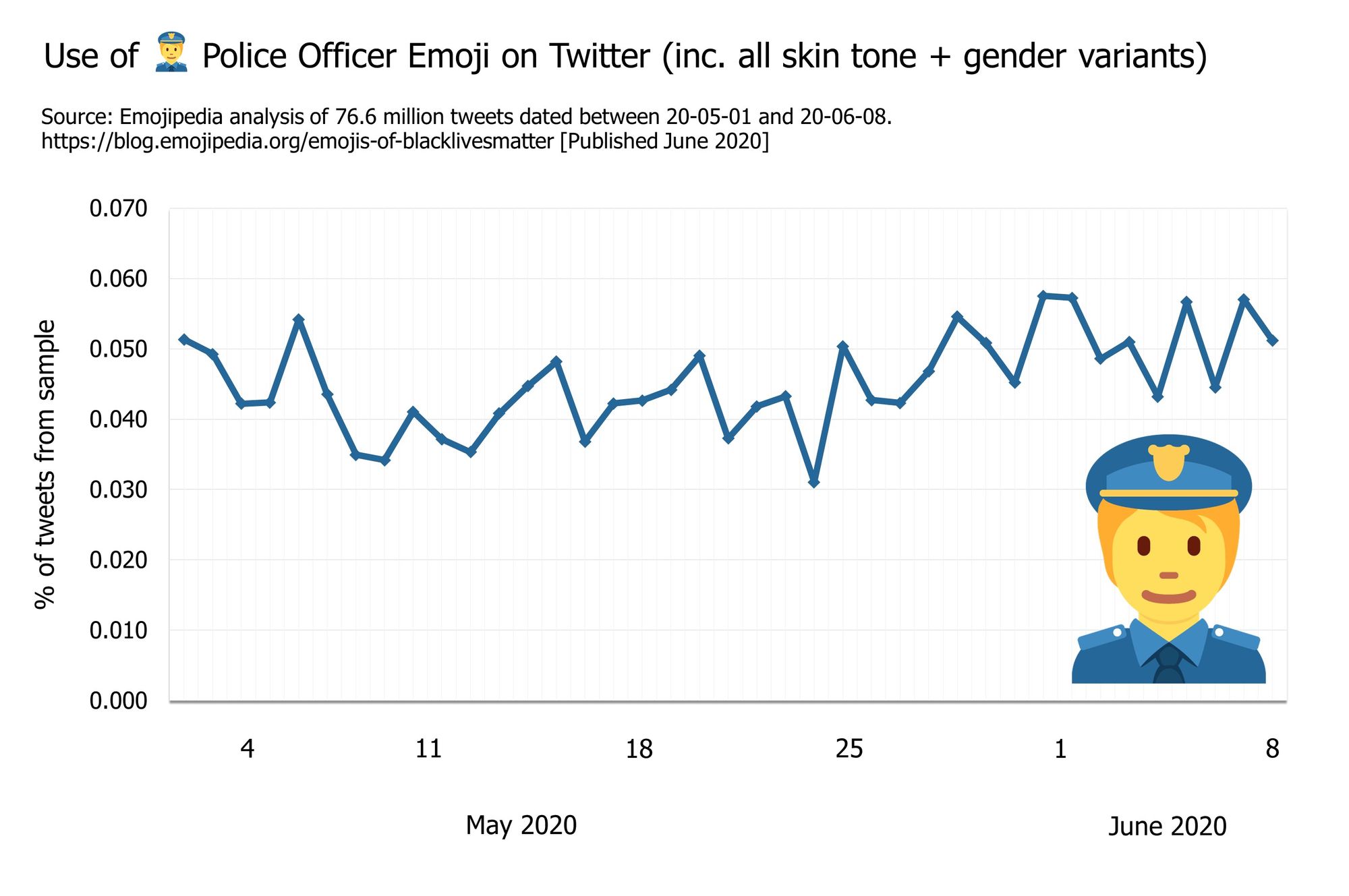 Above: Use of the 👮 Police Officer emojis on Twitter between in May and June 2020.

Phrases used in conjunction with the 👮 Police Officer emojis on the 4th and 5th of June 2020 included George, Black Lives Matter, fuck, cops, and Murdered. 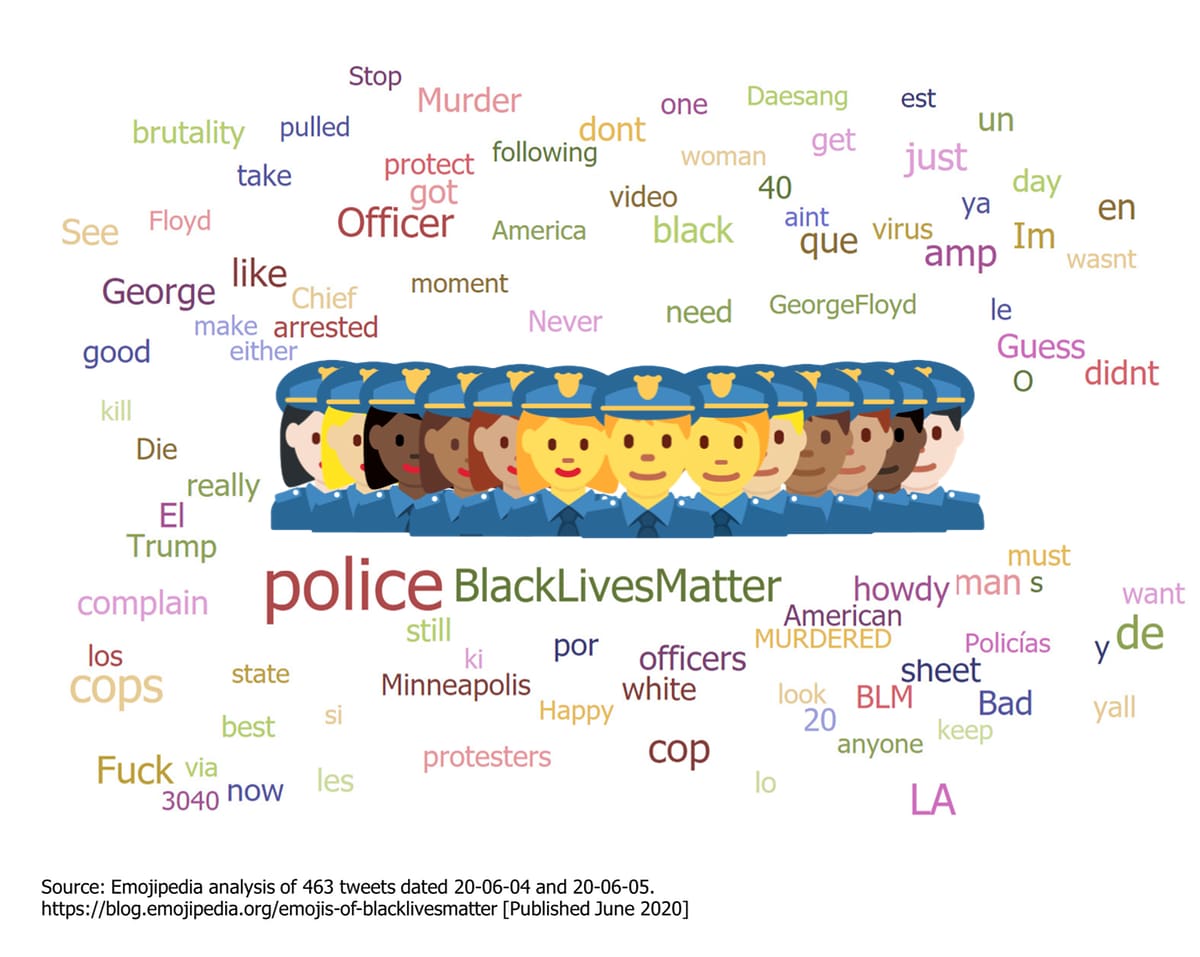 Above: Terms most associated with the 👮 Police Officer emojis.

It's not that the number of uses of the police officer emojis increased in this period, but the conversation around these emojis did change to become primarily about Black Lives Matter.

The top ten other emojis found in tweets within the 👮 Police Officer tweet sample were:

Academic research has previously found that emojis are predominately used in positive emotional contexts. This may explain the higher use of emojis which support a cause such as Black Lives Matter (✊🏿, 🖤) more than emojis which may be perceived as the enemies of a cause (👮, 🚓).

Also worth noting is the fact that major vendors display police officer emojis smiling. The exact level of positivity varies by vendor, with most falling in the neutral-positive range.

Having a relaxed and smiling face makes sense for most human emojis, and while this consistently applied for all emoji professions (eg 🧑‍🚀 Astronaut, 🧑‍⚖️ Judge, or 🧑‍🎤 Singer), it may make the 👮 Police Officer emoji less useful in conversations about police racism and violence. 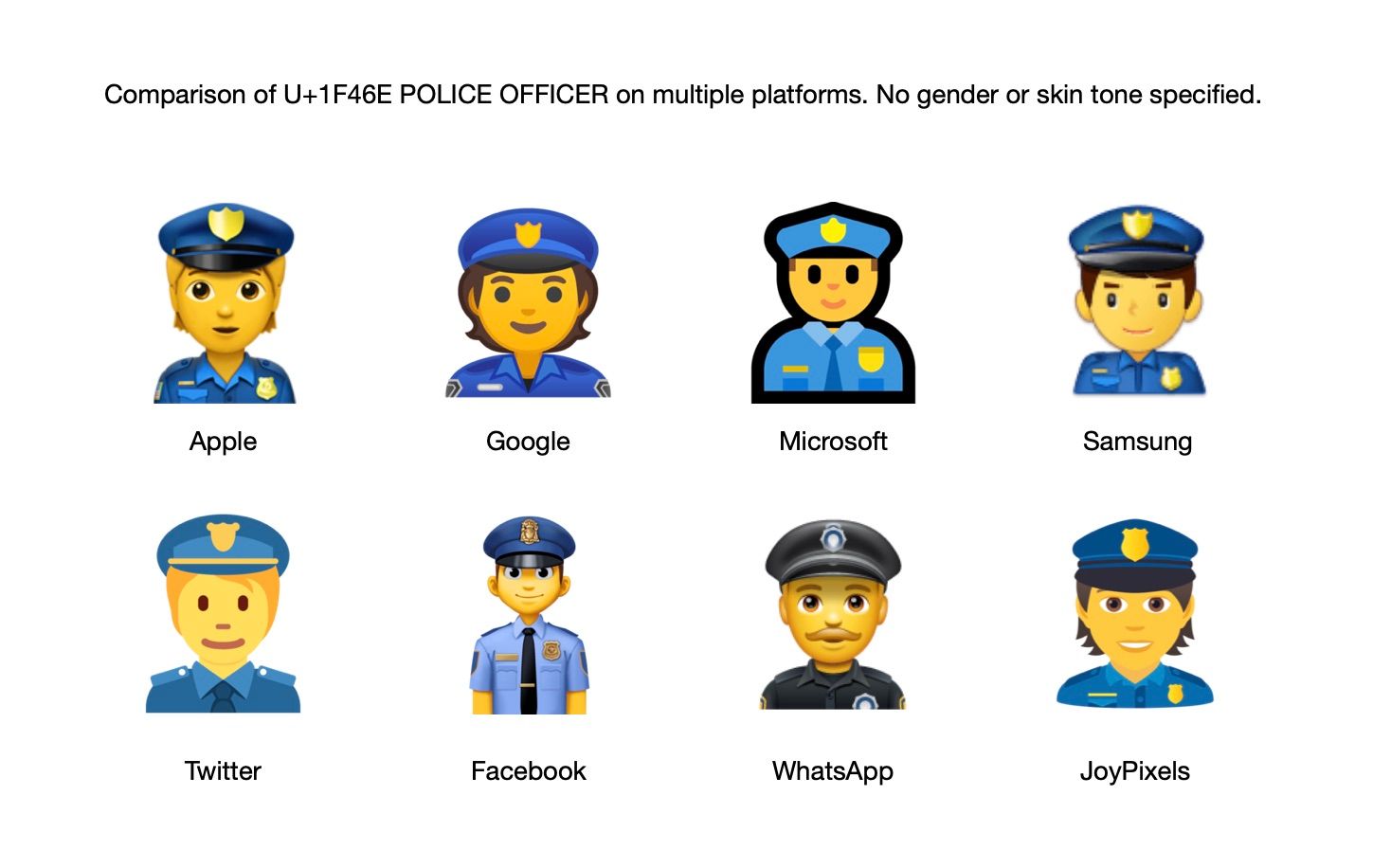 Above: Appearance of the 👮 Police Officer emoji as it appears on different apps and operating systems. Image: Vendors / Emojipedia composite.