In 1999, Shigetaka Kurita created emoji - a simple set of 176 ‘picture characters’ that were intended to send information to Japanese mobile phones in the form of 12×12 pixel monochrome icons alongside kanji or kana characters.

Coming just two years after the earlier emoji release from Softbank, this was a monumental development, as it constituted the genesis of imagery on mobile.

Of this primitive emoji set, only one symbol could be construed as encapsulating any aspect of gender: the ubiquitous 🚻 restroom symbol.

Although this icon does directly reference gender, it does so in an inclusive way. It combines a representation of a man 🚹 and a woman 🚺 to signify that the facility being represented is unisex, or suitable for any person regardless of gender.

Despite Kurita’s iconic designs being considered the precursor to modern emoji, he intended his iconography to function more as symbol characters (文字–moji) and less so as pictures (絵–e).

The nature of emoji changed when they were quickly adopted by other Japanese telephone carriers.

Emoji artwork from KDDI and SoftBank was more detailed and their emoji sets included some depictions with explicit genders, such as the 👧 girl, 👦 boy, 👩 woman, 👨 man, and a handful of other characters.

Some representations of people in these emoji sets were similar in appearance to the other yellow smilies. The 👮 police officer and the 👷 construction worker were originally rendered this way, similar to how the 🤠 cowpoke emoji appears to this day.

In fact, due to the low resolution displays of mobile phones of the time, most original emoji artwork was fairly abstract and gender information was vague and open to interpretation by the user.

As detailed as SoftBank’s animated kiss is, there is nothing that marks either figure as male or female.

Above: This kiss emoji does not mark either figure as male or female. Image: SoftBank

When Apple introduced the iPhone in 2007, the screen was capable of very fine resolution and the designers of Apple’s emoji took the opportunity to include more visual information in their imagery.

One aspect of this added detail was to give explicit gender to many emoji characters that were previously agender or ambiguously gendered in other emoji sets. Apple’s police officer and construction worker became men. Its characters receiving 💇 haircuts and 💆 massages became women. 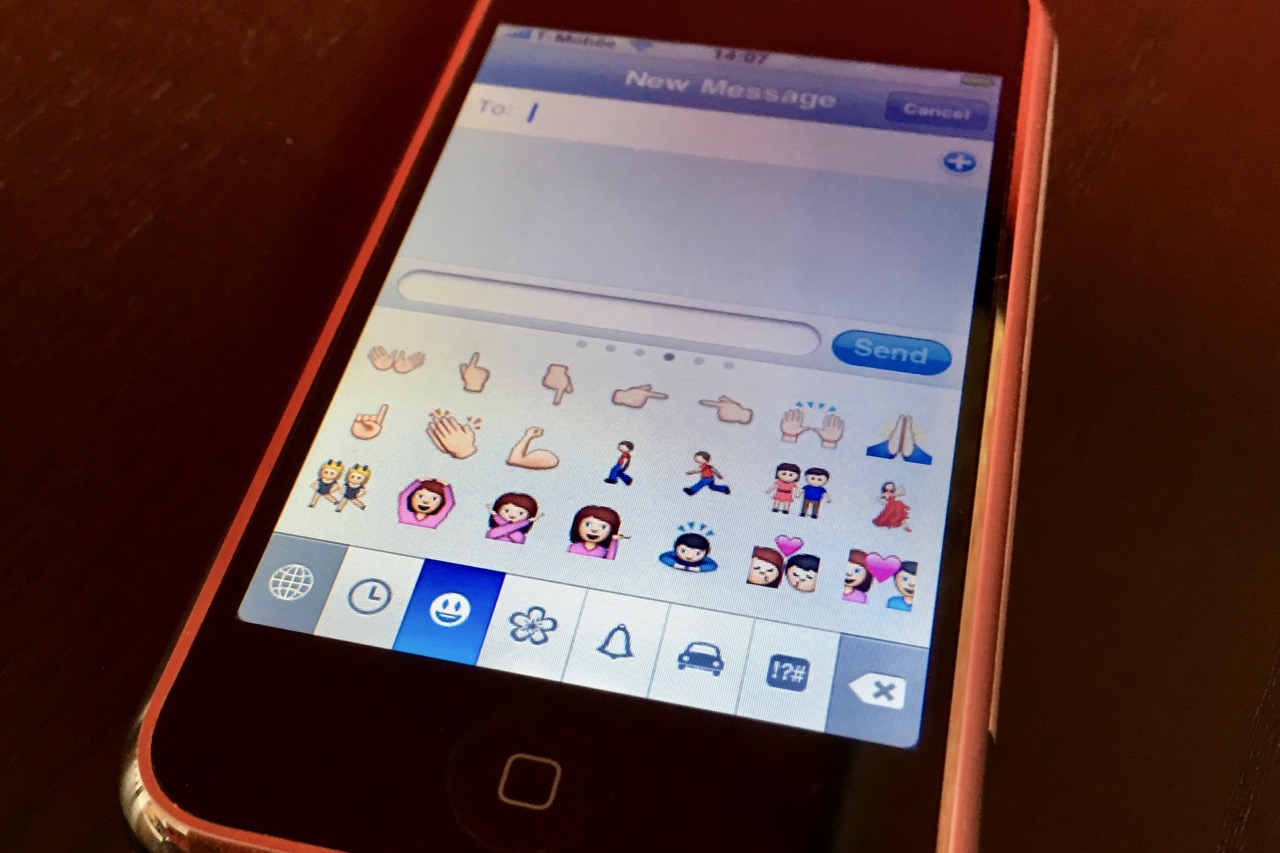 Google sought to remedy this situation by advocating for two gender options, masculine and feminine, for all emoji that appear as human. At the same time, they conceded that binary gender options would not be enough.

Current scientific understanding of human biology supports the notion that physical sex manifests along a continuum, similar to other genetic traits such as height or eye color. As a cultural concept, many societies have historically recognized more than two genders.

And although Google defines gender as ‘the state of being male or female’, this definition anachronistic for our time. Today, an increasing number of individuals have rejected binary notions of gender in favor of more expansive models. A better working definition for gender can be found on Wikipedia as ‘the range of characteristics pertaining to, and differentiating between, masculinity and femininity’.

In a spectral model of gender, masculine and feminine become two poles that define the extremes of gender identity and expression, with each individual sliding along the scale from moment to moment. In a study of 1000 millennials, half viewed gender in this way.

As our emoji communication system continues to evolve with our culture, new emoji are planned for version 10 of the Unicode standard that helps to fill some gaps in gender options and better communicate gender diversity.

Besides encoding visual cues, these emoji characters do not carry explicit concepts of gender so bearded ladies and men in headscarves can feel free to petition their mobile OS creators to also include emoji options for them in the future.

Emoji for the post-gender generation

Filling out the middle of the spectrum, we have a set of three new people emoji with inclusive gender, characters that were conceived to represent all people regardless of gender.

These emoji are intended to depict a child, an adult, and an older person. I proposed the addition of the gender inclusive emoji characters in order to provide better representation for people who want to express themselves in emoji as exactly that: just people.

Not everyone identifies as male or female. Some of us identify as a bit of both, or neither, or something else altogether. Regardless of your gender identity, I hope we can all find adequate ways to express ourselves in emoji.

My wish is that adding more gender options in emoji will help us all to celebrate our unity and our diversity. I advocate for everyone to feel comfortable using emoji men when we feel masculine, emoji women to express our feminine aspects, and gender inclusive emoji whenever we feel like celebrating our humanity regardless of gender.

In terms of emoji reflecting our emerging understanding of gender, the addition of three gender inclusive people emoji is only a first step. For full inclusive gender representation to exist in emoji, there must be androgynous emoji representations corresponding to each man/woman pair.

It’s nice that Google and Apple gave us masculine and feminine rockers in tribute to Davie Bowie, but having an androgynous rockstar emoji would better capture the spirit of Bowie, IMO.

Above: Female and Male tributes to David Bowie on Android and iOS. Images: Google and Apple.

Currently, there are suggested ways for Unicode to enable androgynous emoji representations. If these are undertaken, it will be possible to choose a third, inclusive gender option for every human emoji.

With any luck, a solution could be decided this year.