Last year Snapchat quietly added emoji next to your friend's names in your feed, but it didn't tell anyone what they actually meant – we've cracked the emoji code so you don't have to be wondering what this 😏 actually means.

Did you know you can replay Snaps? A lot of people don't. But this star means that the person replayed your Snap in the last 24 hours by pressing and holding to see it again – it must have been good.

This is the best emoji you could hope for – you're best friends with each other, and you both send each other the most snaps on your own friend's list. That's a lot of Snaps!

Oh, snap, taking it to the next level – the red heart means the same thing as the yellow one – except you've been going solid for two entire weeks without breaking a sweat.

It's really serious with you, huh? That's two entire months of sending each other snaps more than anyone else on your friend's list. You must really be BFFs – there's no higher level than this right now.

Ahhh, you just made friends with this person – this will show for a week to let you know you've just made a new friend.

That awkward moment where someone's your Snapchat best friend, but it's not a two-way street. You get a lot of Snaps from them, but you don't reply much. Maybe it's time to Snap back?

Like best friends but not – you send a ton of Snaps to this person, but they're not #1... just someone that you really like. I see this one a lot, whoops.

It's lit – you've sent this person a Snap every day for a week, which is an impressive amount of dedication to Snapchatting that one person. You'll get more fire the longer it goes on – keep it up!

Woah – you sent 100 days worth of Snaps to this person in a row, which is an impressive feat. It'll appear next to the fire emoji too, just to show how good you are: 💯🔥.

This is a warning – if you don't send a Snap now your streak's going to end. Get on it quick, or you'll never get that 💯🔥.

I've never actually seen this one in action, because it needs your friends to enable "Birthday Party" in the Settings – but it does exactly what you'd expect – remind you of a friend's birthday... which is what Facebook is for. 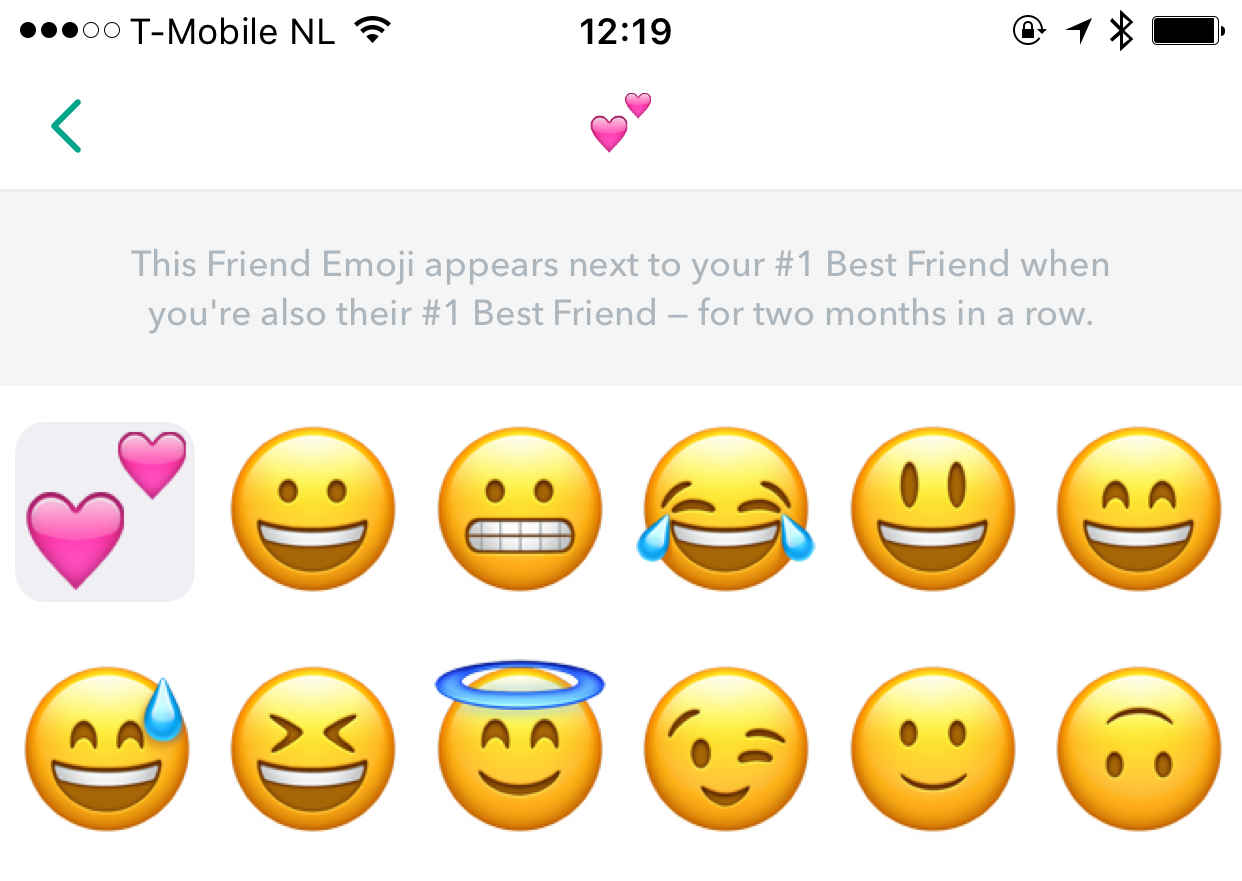 I'll let you in on a secret: if you don't like any of these emojis or just think they're lame, you can change any of them to whatever you like!

It's really easy, just head to your settings, then 'Additional Services' and click Manage. Once you're there, choose 'Friend Emojis' and you'll see the meaning of each emoji, as well as the option to change it to anything you like.

You might have added a famous person at some point, then noticed a weird emoji showing up in your Snapchat Stories area. That's because Snapchat is now verifying celebrities using an exclusive emoji for each one.

There's a whole ton of famous ones out there, like 👾 for Joe Jonas, 💪 for Arnold Schwarzenegger and 🌵 for Jared Leto – maybe if I'm famous one day I can claim 💁 for myself... but it'll probably be too late.