The Unicode Consortium has today released Unicode 8, which includes 37 new emojis such as the Face With Rolling Eyes, Hugging Face, Taco, Cheese Wedge and Hockey — both ice and field varieties.

In addition, five emoji modifiers are included with Unicode 8, bringing the total number of new characters to 41.

Of course, the Unicode Standard Version 8.0.0 (as it is officially known) includes more than just emoji updates, but given the nature of this blog, that is what I will focus on here. Sample images for emojis in this post are for demonstration purposes only.

Who chose these emojis? Can I use them today? How do these updates relate to the recent emoji changes in iOS 8.3, Android 5, or Windows 10?

All good questions, but first let's take a step through the emoji creation timeline.

Above: Webdings lives on in Unicode 7. Source: Microsoft

Above: Candidates for Unicode 9 are already available. Example images for the Face Palm, Shrug, and Fingers Crossed

You see, just because an emoji gets approved, it's of no use to anyone until fonts are released that include these emojis on major platforms such as iOS, Android, OS X and Windows.

Apple jumped ahead with Unicode 8 and provided support for the Emoji (Skin Tone) Modifiers in iOS 8.3, despite the Unicode 8 Standard being a draft at that stage. 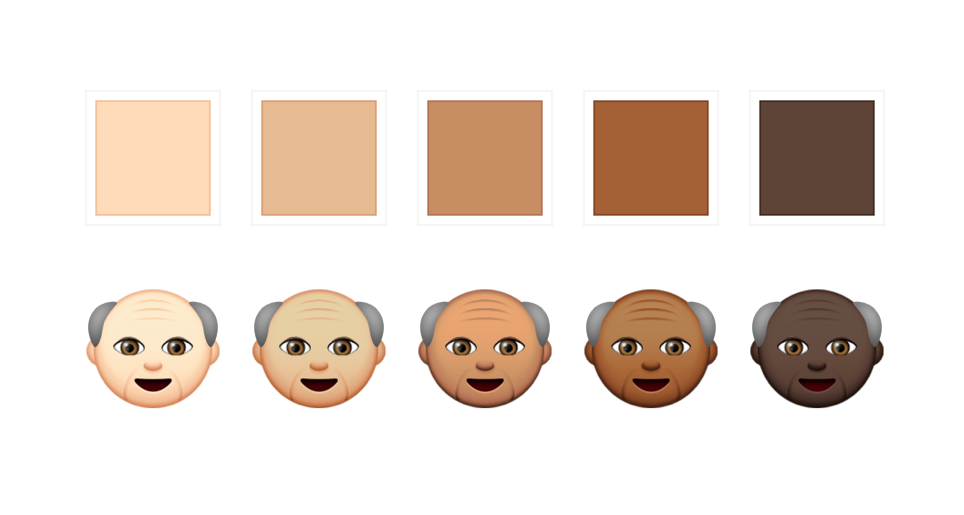 Above: Skin Tone Modifiers are part of Unicode 8. Already supported by Apple in iOS and OS X.

Yet the middle finger emoji lingers unsupported by most (but not all) platforms, despite being approved as part of Unicode 7 in June of 2014.

What I'm saying is that if you are like Roger Federer and craving that Popcorn emoji, it's now in the hands of Apple, Google, Microsoft, and you might be waiting a while.

A Glimmer Of Hope

Unicode 7 may have been a misfire, due to the sheer number of new emojis approved, and the utter irrelevance of most inclusions.

Above: Three Button Mouse and Telephone On Top Of Modem: included in Unicode 7 for compatibility with Webdings

It's easy to see why Apple or Google may have been reluctant to put resources into emoji-fying this list of of outdated technology, despite there being some gems amongst the list (shopping bags gets a high number of requests, as does the bed).

Jason Snell and Myke Hurley touched on the subject of emoji fragmentation in their Upgrade podcast this week, and it goes to show that even the most tech-savvy amongst us can still struggle to know which emojis work on which platforms, or simply different versions of the same operating system.

Hopefully with the focus on relevant, popular and useful emojis in this update, we will see them implemented in a more timely manner than has been seen in the past.