“Innocuous and omnipresent, emoji are the social lubricant smoothing the rough edges of our digital lives: They underscore tone, introduce humor, and give us a quick way to bring personality into otherwise monochrome spaces.”

Luke Stark and Kate Crawford penned these now classic words in their 2014 deconstruction of emojis in The New Inquiry. They seemed especially relevant this past week as I sat in New York watching events unfold across the country’s 🛫s and in our major cities, events that left me at times 😱,😪, and 😐.

On Friday, I had just returned from the protests at JFK when my friend Samira, a journalism student, texted me a simple drawing in pink ink - it was the ✊🏽 raised fist emoji. “Of late, I've been doodling this while sitting in class,” she confessed. “Didn't even realize how much it's in my system now, you know?” 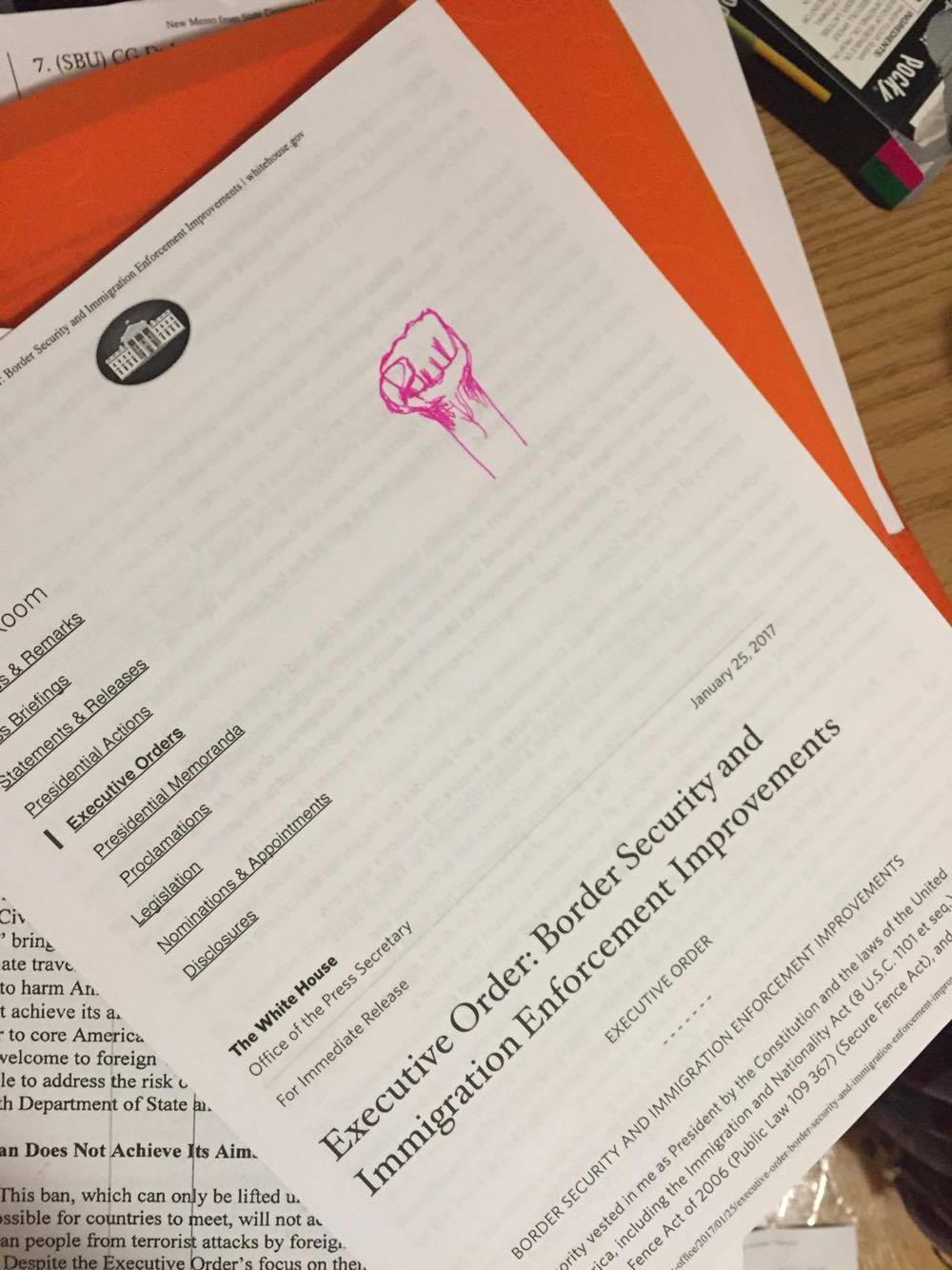 I was stunned for a moment, but of course, it makes so much sense. For months, I had been studying emojis-as-language, using their prevalence across social media as a means of understanding cultural trends and pop phenomenon. Last December, my analysis of the 🍑 peach emoji confirmed it was mostly used sexually or anatomically, and almost never to refer to the fruit. (Sorry, Georgia.) Before that, I had written about the emojis of #fanlove, and refereed a long-standing dispute between Taylor Swift and Kanye West.

But now, I realized that emojis have seeped far deeper into our collective consciousness than their Japanese designers could have foreseen in the 1990s. In a time of national crisis and despondency, could emojis be a way of expressing solidarity?

I turned to the Twitter Search API[1] to request tweets from last weekend - immediately after the #MuslimBan was announced. I pulled English-language tweets for selected viral protest-related hashtags: #NoBanNoWall, #NoMuslimBan, #NotMyPresident, #TheResistance, and out of curiosity, #WomensMarch. After removing retweets and deduplicating by user name, I ended up with nearly 60,000 unique tweets.

Above, I’ve listed the top five emojis for each of the protest-related hashtags. (Also, for comparison, I’ve provided data for an assortment of other topics - ranging from politics to fashion to sports - that I’ve been monitoring over the past few months.)

We notice, unsurprisingly, that the two most popular emojis that show up in the top five across topics are ❤️️ (8 of 10 topics) and 😂 (7 of 10 topics). The exceptions are also interesting: 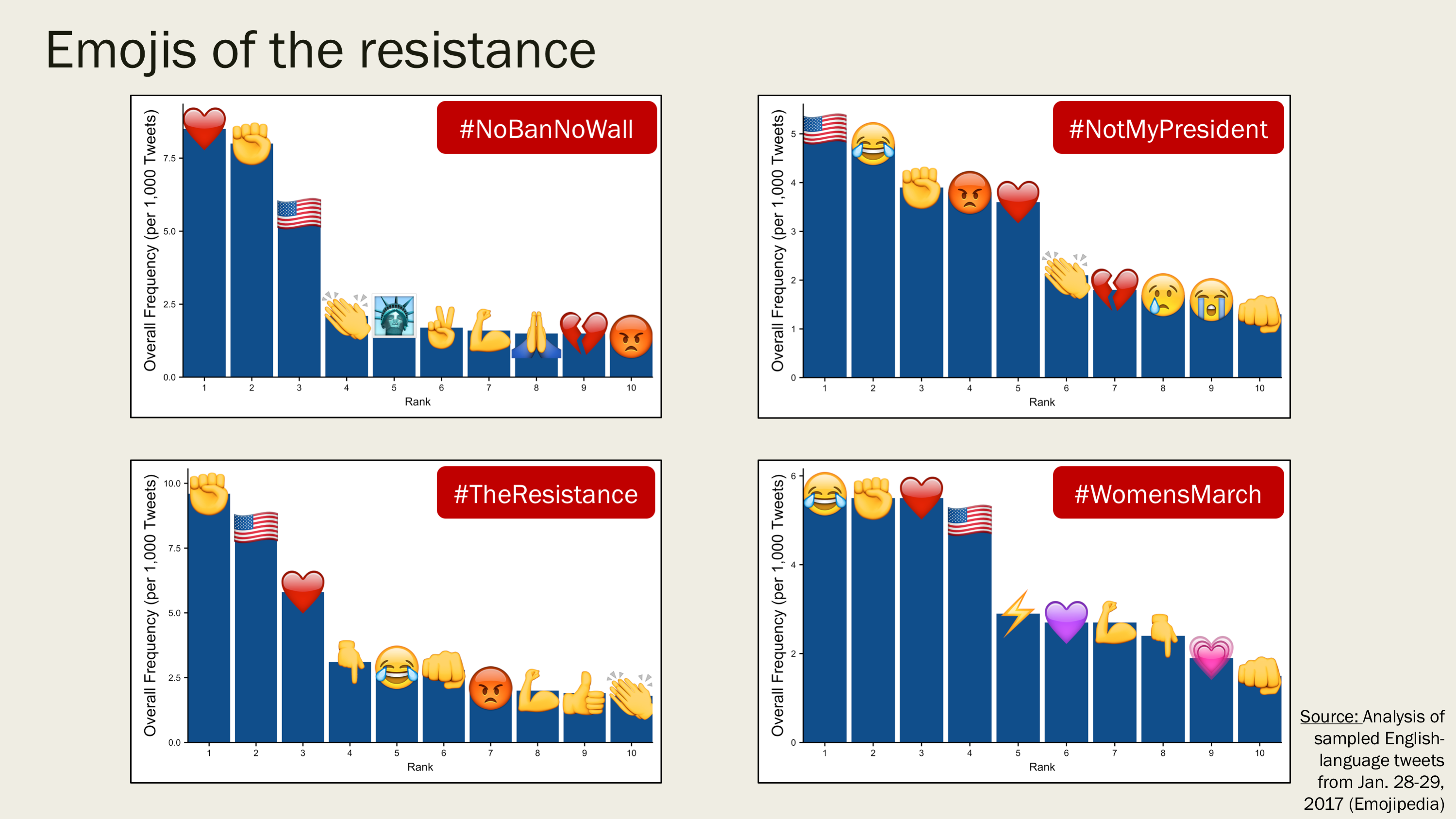 Another way of visualizing the data is to plot the top 10 emojis, by frequency, across the top protest-related hashtags. Here, we see that #NoBanNoWall reflects love and solidarity, #NotMyPresident conveys disappointed patriotism and mockery, #TheResistance communicates defiance protest-as-nationalism, and #WomensMarch is a jumbled mix of mockery, defiance, love, and country, all at once. 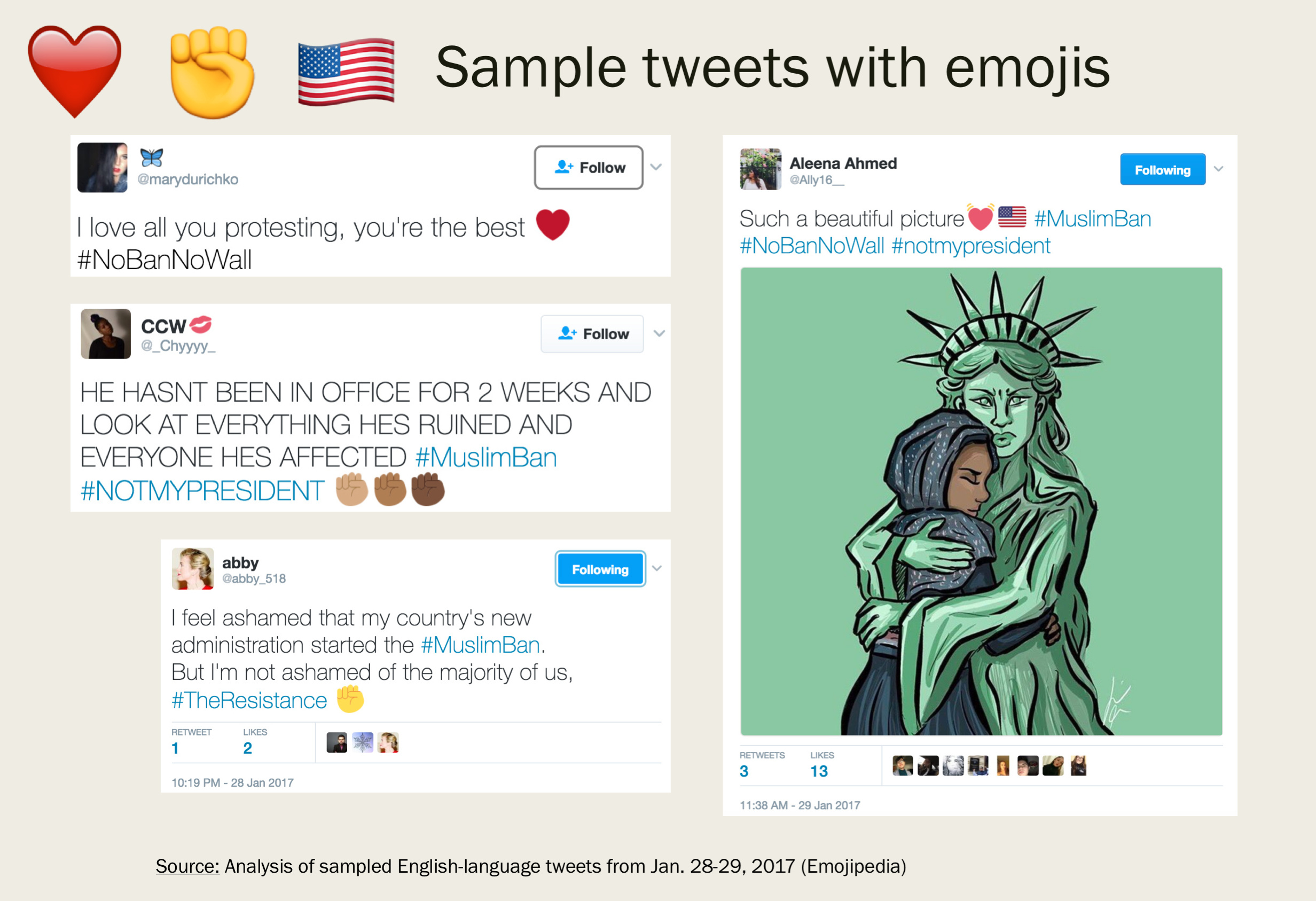 We also see certain emojis are more likely to be used with certain hashtags; for example, #NoBanNoWall often uses the 🗽 Statue of Liberty emoji, which is used literally and as a marker of freedom (i.e. “France 🇫🇷 called and asked for the Statue Liberty 🗽 to be returned back) as well as to represent New York City, where many of the most fervent protests were based (i.e. “Huddled masses yearning to breathe free. 🗽” with a picture of the New York protests.)

The 👏 clapping hands emoji is also interesting in that its usage appears divided between celebrating the protesters, the attorneys, and the judges who ruled against the executive order, and also being sarcastically used to throw shade on the administration and its supporters.

We also find, curiously, that the 😭 loudly crying emoji, contrary to the assertions of many teenagers who argue that this should only used sarcastically, is indeed used seriously as well. For example, we find “Crushed. It's only been one week 😭. #notmypresident” and also “I am so sad by what our so called President has done to our world in 8 short days he has been in office😭😭 #NoBanNoWall #NotMyPresident.” 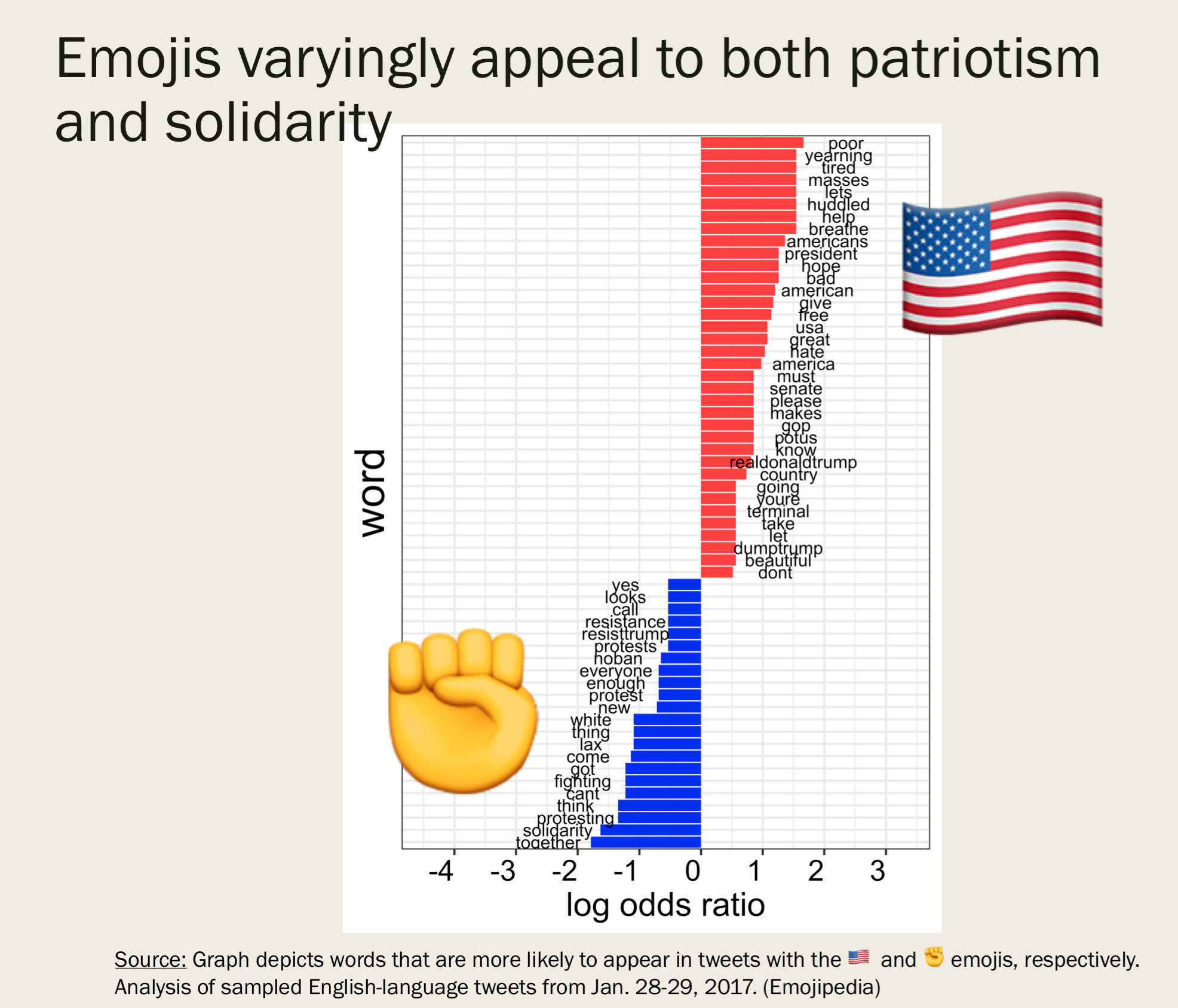 Can we quantify how people use emojis to express different forms of protest? Above, we compare word counts in tweets with 🇺🇸 and tweets with ✊. We express the results in terms of log odds ratio which is a measure of how much more often a word is used with a given emoji.

We find the words that cluster strongest with the 🇺🇸 - “poor”, “yearning”, “masses”, “americans” - all seem to appeal to patriotism as an argument to justify fair treatment of immigrants and refugees. The effect is driven by numerous tweets with the 🇺🇸 that quote from The New Colossus, the poem by Emma Lazarus engraved on the base of the Statue of Liberty. For example:

"Give me your tired, your poor, your huddled masses yearning to breathe free" 🇺🇸 #NoMuslimBan #NeverAgain #RefugeesWelcome

On the other hand (pun intended), words that cluster with ✊ - “protesting”, “solidarity”, and “together” - seem to emphasize community based humanitarian appeals.

We should admit the main limitation of our analysis is that we only considered protest-related tweets. Almost certainly, emojis such as 🇺🇸 and ✊ have very different connotations for supporters of the administration and future research should examine this.

We were also curious to see whether there was any meta discussion about emojis in tweets with emojis, and to our surprise, we found two tweets in our dataset that are too good not to share.

😡😡😡😡 I have used angry faces more in the last seven days than I have since I've had Twitter or emoji's. #TheResistance https://t.co/jtKA7n1EWD

We’re not sure if such an emoji is on the cards, but if it is, rest assured that Emojipedia will be the first to bring you the news.