Slack users have long requested an update to Slack's emoji support. Now it's here, but there is a catch for some users.

Reports of a gradual rollout of these new features have flooded into Emojipedia over the past few days,[1] and today this emoji support arrives for the majority of users.

Want to send a 🧟 Zombie, 🦖 T-Rex, or 🤮 Vomiting Face on Slack? Now you can with the built-in emoji picker getting an update as well as new :shortcodes: available for these additions.

The catch? Slack's “change your emoji design” feature is gone: 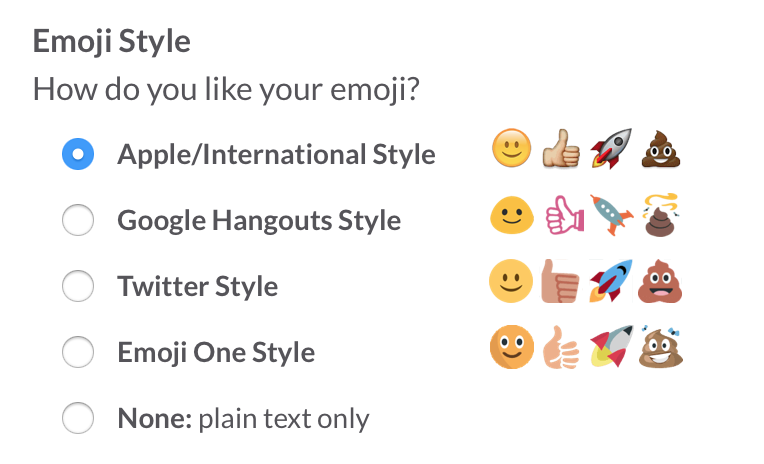 Above: You can no longer change emoji style in Slack.

The new emojis now available in Slack cover everything released up to and including Emoji 5.0 in 2017.

This also means all the updates from Emoji 4.0 in 2016 are also available in Slack for the first time.

Above: Emoji 4.0 was released in 2016 and included these new emojis.

This update was a long time coming, and a lot has changed in the emoji landscape since Slack first introduced emoji support. It's now standard that most human emojis have at least two gender options and five skin tone modifiers.

Slack now supports all 2,666 emojis listed as part of the Unicode Standard.

Users of iOS or macOS will see the least change to design in this release, as Slack previously defaulted to using Apple designs on all platforms.

Those using on Windows, Android, or any non-Apple platform will see a consistent set between: but it's not what you might expect. Google's emoji designs are being used for all non-Apple platforms now as shown by this alert: 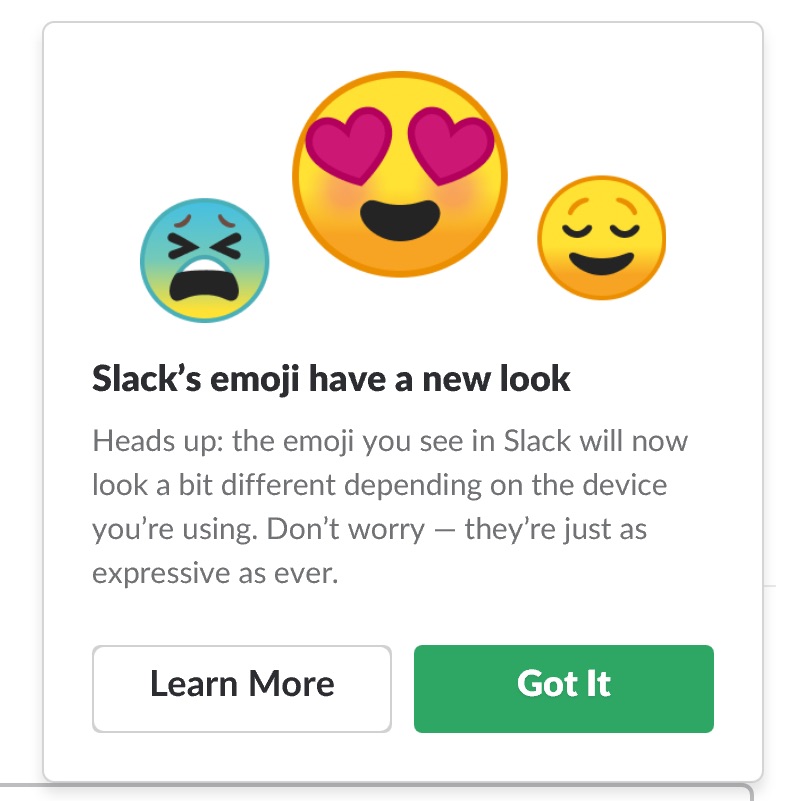 Above: Google's emoji font is shown to all non-Apple users.

While Apple's emoji font is entirely owned and copyrighted by Apple, Google's emoji font (named Noto Color Emoji) is provided with an open source license which allows other projects to use this within the terms set out in the SIL Open Font License. Given this, it's possible that Slack believes it is on firmer ground to be using Noto Color Emoji rather than embedding Apple emoji images on competing platforms.

The result is that users all have an up-to-date emoji set, but it will look different between platforms.

Above: A message sent from Slack for Mac (top) and how it appears now on Windows (bottom).[3]

This could be quite a change for those who had become attached to Apple's designs (or Twemoji, or EmojiOne, but it doesn't appear that those are coming back.

Regarding the change, Slack notes while users cannot change their emoji design, they can opt for plain-text display of shortcodes:

I would suggest that a more useful feature for users might be to allow native emoji support as an option.

Those on older systems may opt to use embedded images from Apple or Google (depending on OS), but those with an updated system would have the ability to use native emojis built from their own platform, such as those from Microsoft in Windows 10 Fall Creators Update.

Overall, this update is a net-win for users.

Before this release, users were stuck with not only an outdated emoji selection in Slack, but the prospect that newer emojis would appear correctly on iOS, but break into their individual components when viewed on other platforms.

In particular, Slack no longer splits a gendered-emoji into two characters.

Because Slack translates native emoji into its images, the new OS X emoji are broken. It doesn’t correctly render “bowing woman” as one char pic.twitter.com/WfqLZvCKZj

Presumably, this new emoji implementation might mean that new emojis are supported quicker in future updates. And that can only be a good thing.

Hidden feature and/or oversight: if you want to go back use Apple emojis on Slack for Windows load it in a browser and change the user agent pic.twitter.com/SATW0IMPhC

Update Feb 7, 2018: The implementation of Google emojis appears to be slightly out of date, which means cheese is under the burger 😬 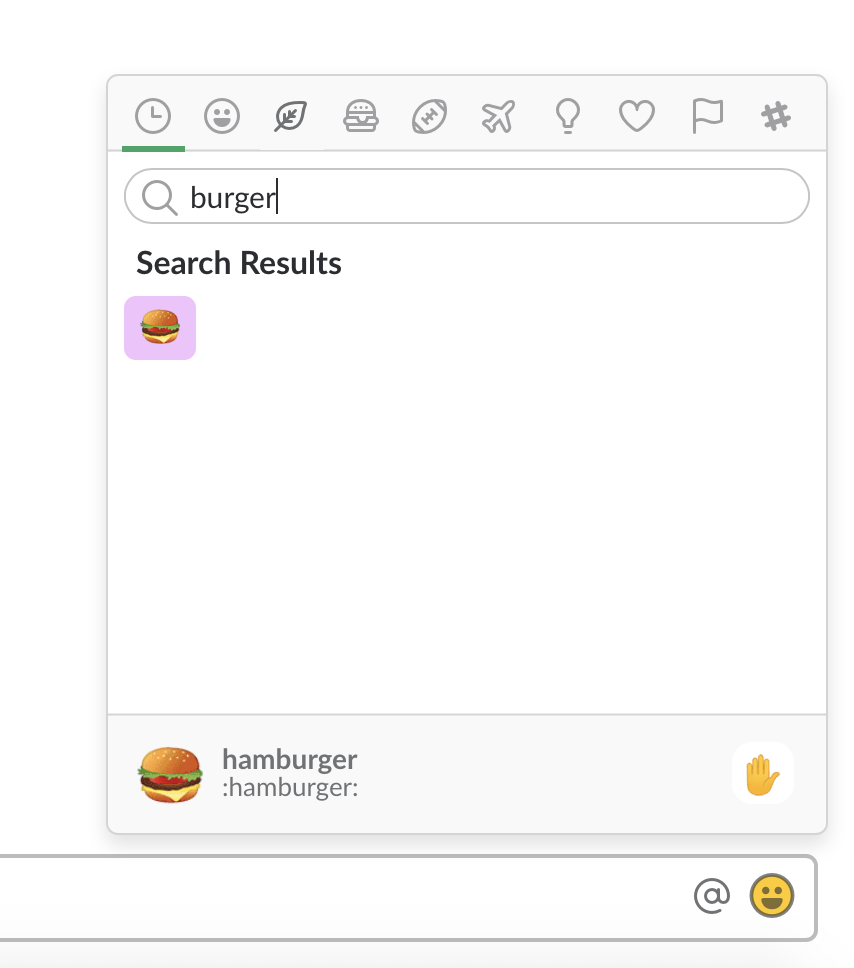 Regarding the rollout, a Slack spokesperson told Emojipedia:

“Starting today, emoji in Slack will be updated to align with the latest set from Unicode (that’s Emoji 5.0 for those keeping track). The rollout will be gradual and requires a workspace reload or update to the latest mobile app to take effect.”

Anecdotally, it appears that a large number of Slack users already have access to this update, however this rollout is still taking place and will continue over the coming week.