Samsung surprised many when it updated emojis on the flagship Galaxy Note 7 in August this year, yet failed to address the majority of the emoji shortcomings such as skin tones, or support for newer emojis.

That changes with the latest emoji update from Samsung, rolling out now to Galaxy Note 7 users.

In an odd turn of events, Samsung's biggest emoji update in years has been released as part of the relatively feature-free[1] Green Battery Update which was released on September 22, 2016.

This update to the Galaxy Note software changes 70 existing emojis, and includes 496 new emojis for the first time.

The Android version has not changed in this update, and remains the same as the launch release of the Galaxy Note 7 (Android 6.0.1)

Appearing for the first time in this update are emojis with support for skin tone modifiers, as well as the latest Unicode 9 updates.

Above: Drooling Face is understated in Samsung's emoji font (middle).

Other additions include 🤣 Rolling On The Floor Laughing, 🤦 Face Palm, and more. 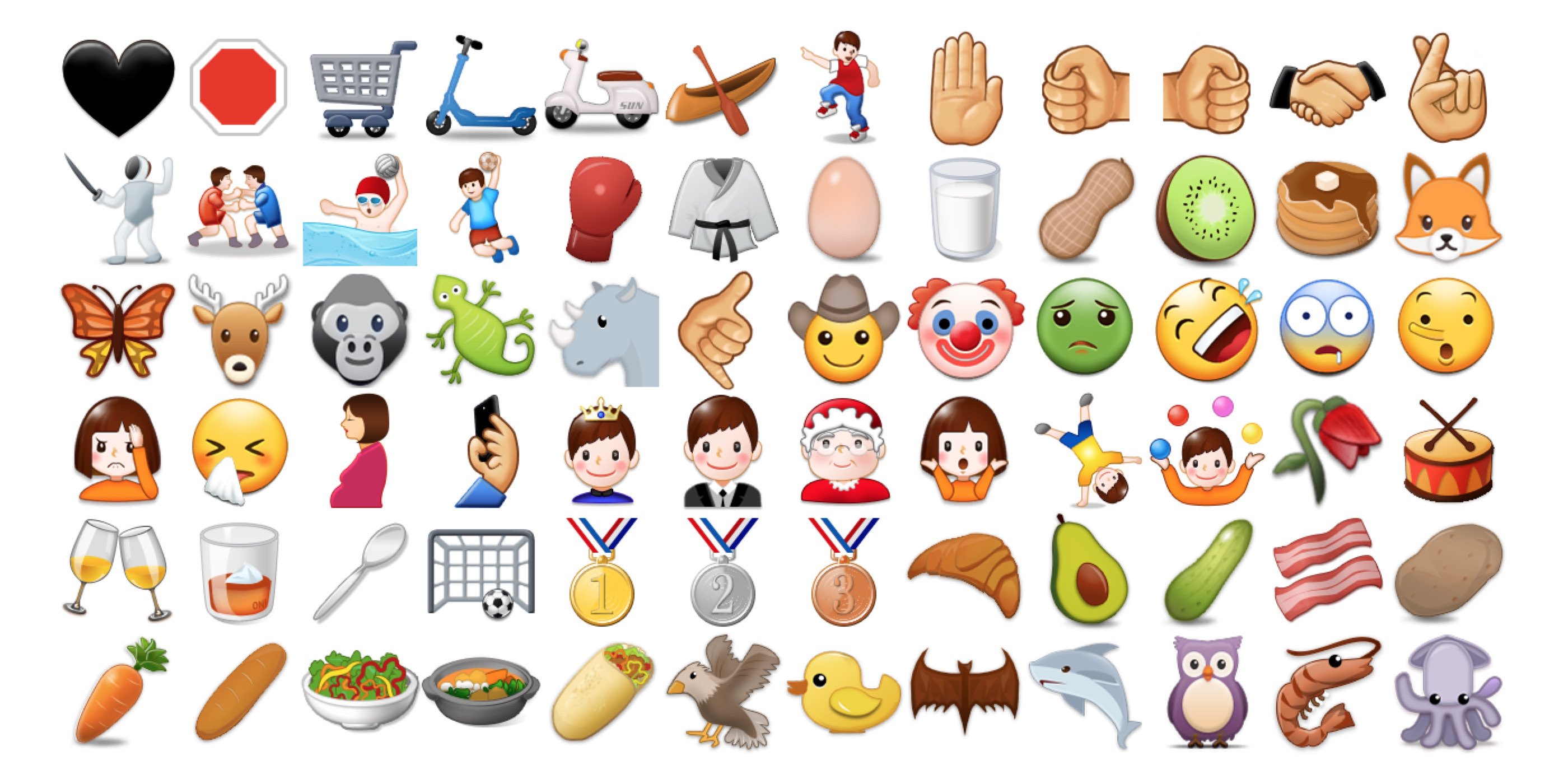 Above: All 72 emojis from Unicode 9 are supported on Samsung Galaxy Note 7 Update.

The full list of Unicode 9 emojis now rolling out to Samsung users:

As with other platforms, emojis with human appearance listed above also have five additional variations, for each skin tone.

Of the new emojis, the 🤞 Hand With Index And Middle Fingers Crossed has an odd quirk, featuring an additional finger: 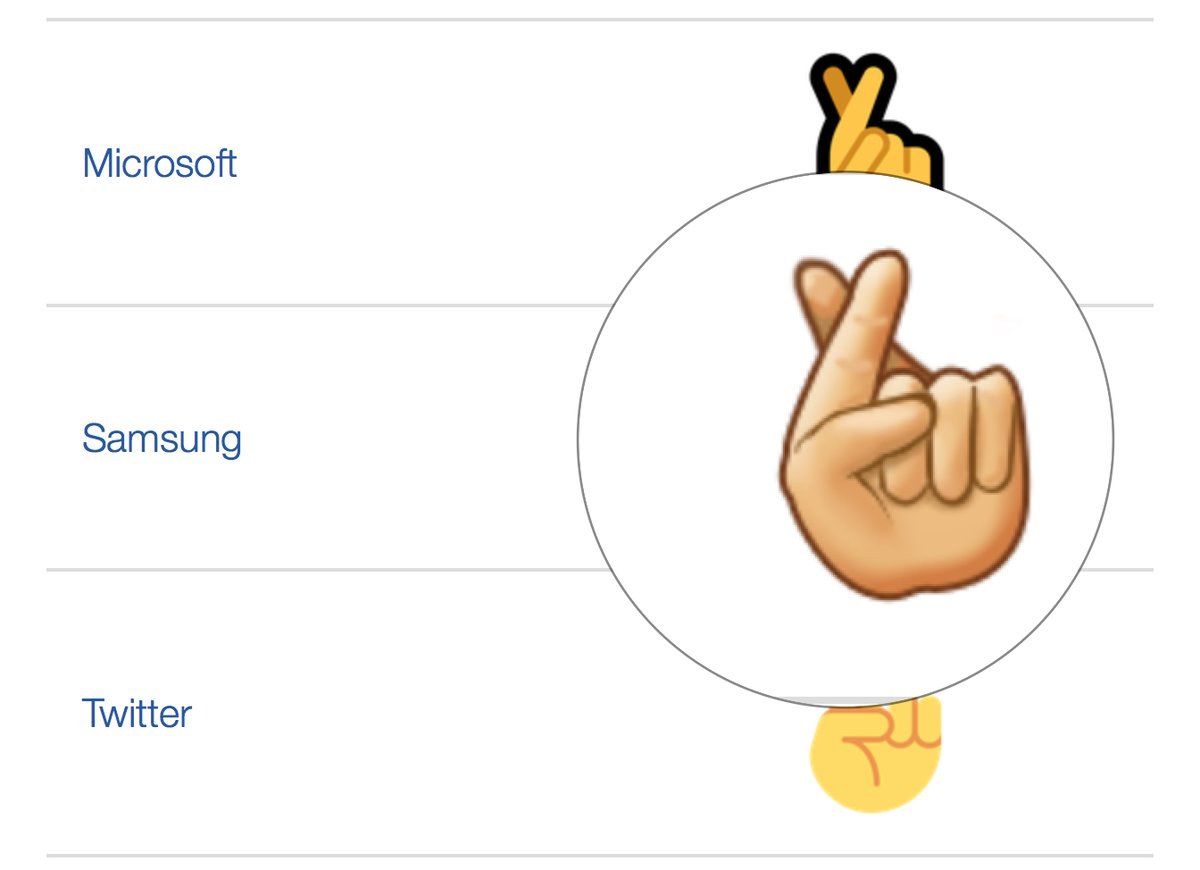 We'll stay tuned to see if this is fixed in a future Samsung emoji update.

Skin tone modifiers were added to the Unicode standard in early 2015, and have since found their way to all major platforms.

Samsung joins the party with this update now supporting a base emoji, plus five skin tone variations for each of the humans: 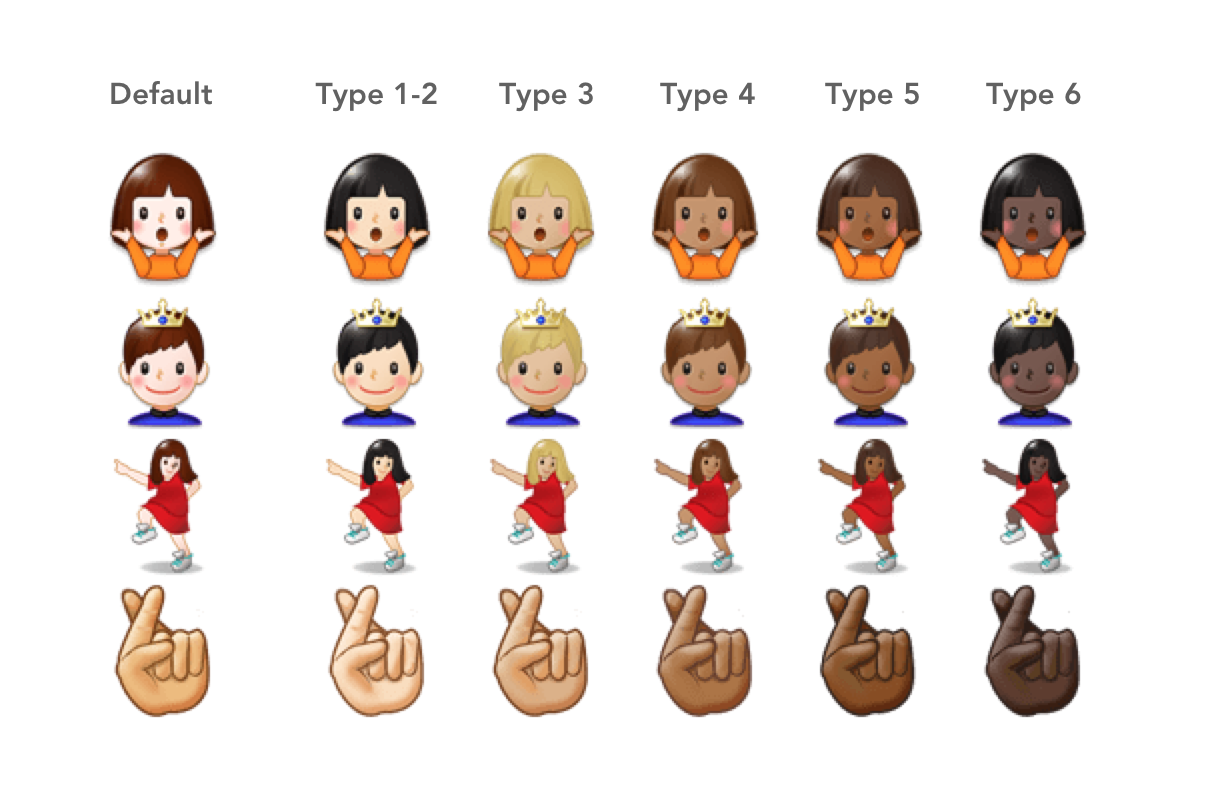 Emojis with more than one person also support skin tones, but both people must have the same skin tone.

This is due to the fact that most of these characters are implemented as a single codepoint, which can therefore only accept one modifier for skin tone.

Above: Wrestlers and Handshake support skin tones, but the same skin tone must apply to both characters.

In a change from other platforms, the default skin tone remains white, rather than going with a "Simpsons yellow" as recommended by Unicode, and used on other platforms.

👮 Police Officer and 💃 Dancer previously had a darker skin tone on Samsung devices. This has changed to white as the default, now that a specific skin tone can be chosen.

Samsung's Dancer emoji has had a wild few years: 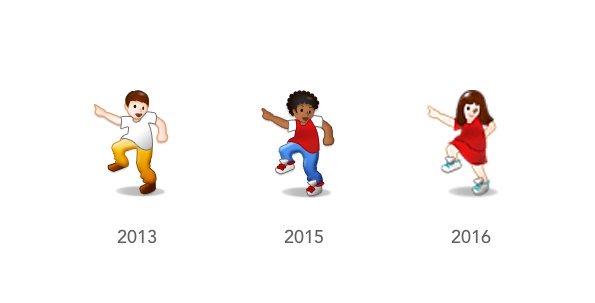 Many emoji genders were changed to match Apple's emoji appearance in this update.

Gender switches in this update include:

A number of emojis that previously had a "symbol" appearance have gained a realistic appearance in this update from Samsung. 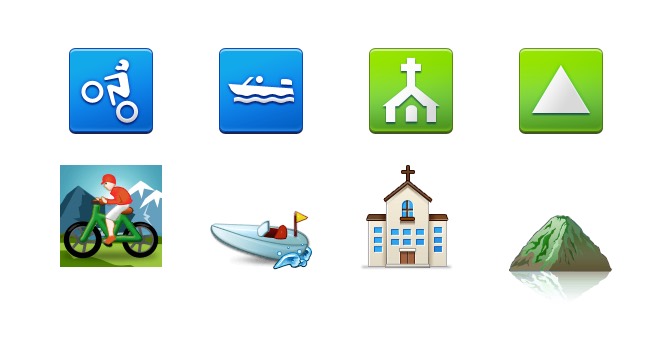 Top: Many emojis had a symbol-like appearance previously. Bottom: Realistic overhaul in this update.

Symbols given an IRL upgrade include: 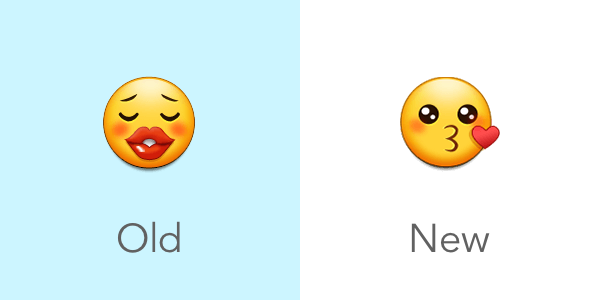 😔 Pensive Face has closed its eyes, but otherwise keeps a similar mourning vibe: 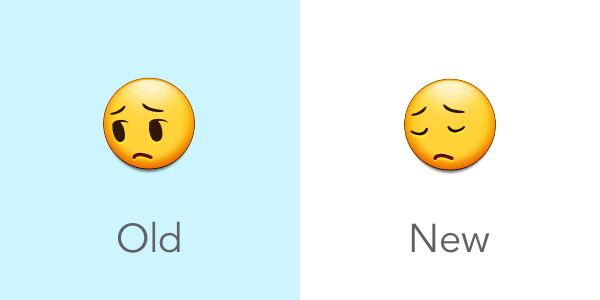 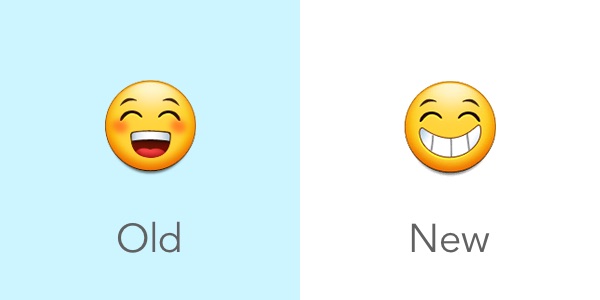 😆 Smiling Face With Open Mouth and Tightly-Closed Eyes gets eyes that more closely match other platforms: 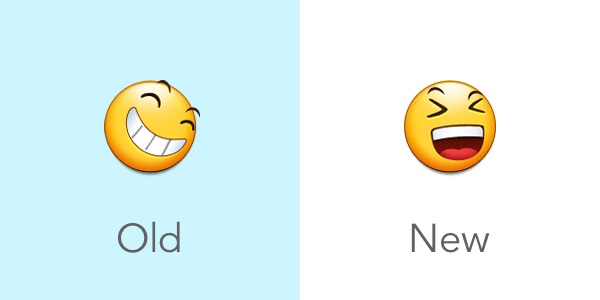 ☹ White Frowning Face is now yellow[3] like the rest of the emojis: 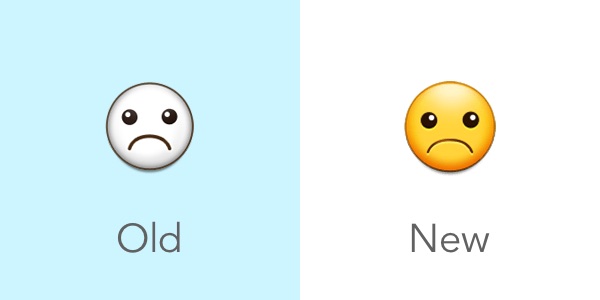 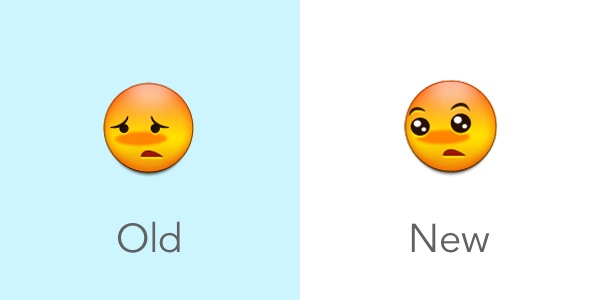 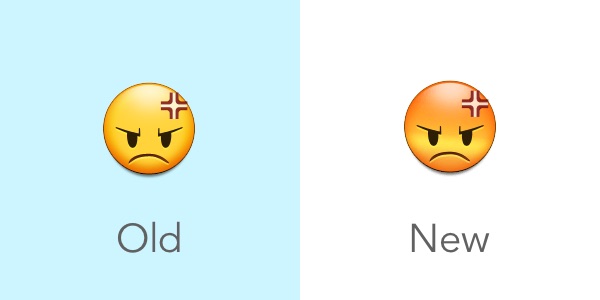 ℹ️ Tip: click any image on Emojipedia to view the platform history for that emoji.

🕯 Candle has changed from a shade of pink into a plain white: 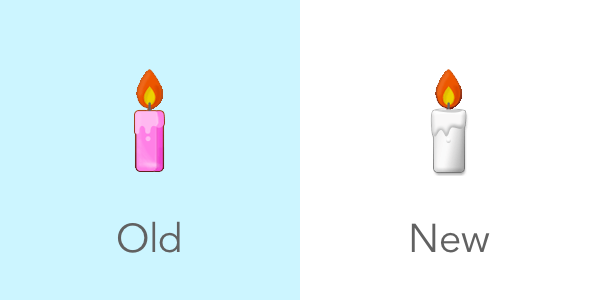 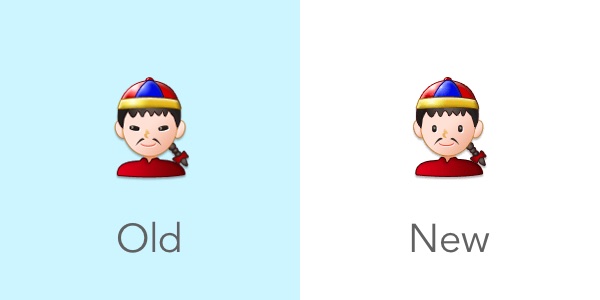 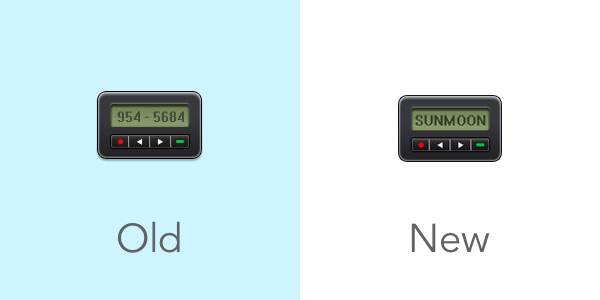 Emoji sets are a popular place for designers to include little easter eggs that provide a wink or a nod to an internal company detail.

For instance Twitter makes the 🏢 Office Building look like their own headquarters, LG has their logo on 🔖 Bookmark, and Apple has their Johnny Appleseed character on 💳 Credit Card.

Samsung has gone above and beyond with this update, adding all manner of easter eggs to existing emojis.

Initials such as HY, JYS, LHK, and WH are now scrawled across at least 10 Samsung emojis.

Instead of making subtle additions, these letters are distracting, and may change the meaning to users.

The letters "U" and "V" are mixed up in this latest update from Samsung:

These characters are used to create emoji flags - so are rarely seen individually - but if an unsupported country code or singleton is shown out of sequence, this is what Galaxy Note 7 users will see:

Hardly a deal-breaker, but an odd bug to make its way into a shipping product[4].

This release is currently only being distributed to users of the Samsung Galaxy Note 7.

It is expected that it will be rolled into future updates for other devices, but Samsung has yet to confirm the details of this.