Analysis of the number of people using emojis as the plural of the word emoji shows increased use of this variant, rising consistently since 2013.

"Emoji" remains the preferred plural of emoji in writing, though it's less clear if this applies to the spoken word. 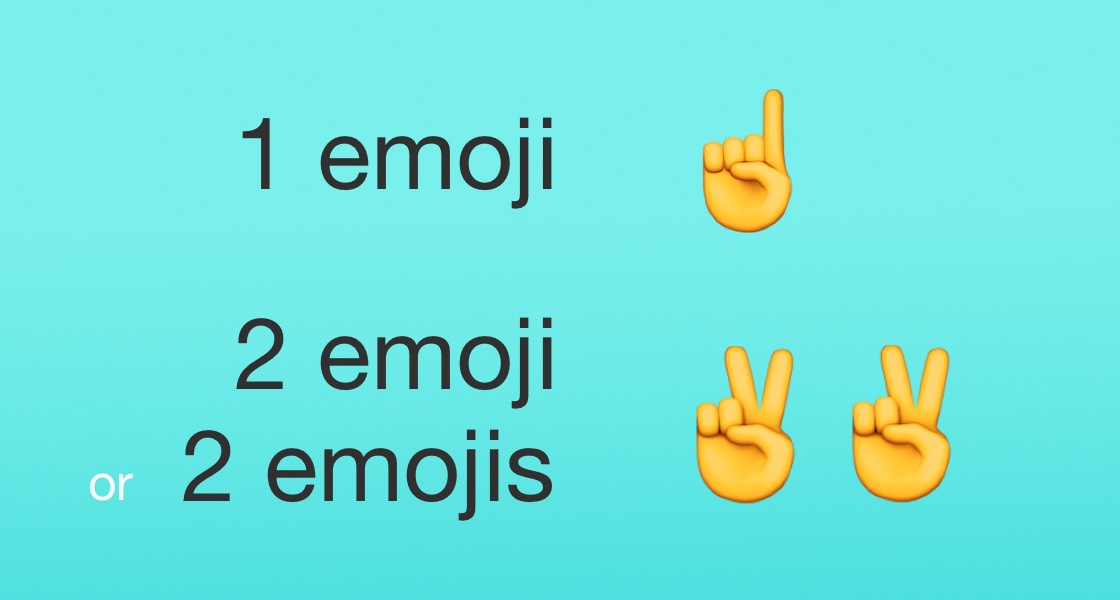 The Japanese origin of emoji suggests that emoji should be used for both singular and plural purposes, however as with many words we borrow in English we tend to bend the rules to make them fit.

Tsunami is another word of Japanese origin commonly pluralized as "tsunamis" outside of Japan, yet "sushis" is rarely ever used.

Emoji and emojis are now considered acceptable ways to pluralise the word "emoji" in English. The use of both terms has been covered elsewhere, so I won't go into more detail over which is right or wrong here, but can suggest reading the aforementioned articles to get up to speed.

What I looked for in the following data is real-world examples of how people are using "emoji" and "emojis" online.

The first question that arises is: when people search for "emoji" on Google, are they meaning that in the plural or singular sense?

"Emojis" always refers to a plural, that part is simple. Breaking down the intent of the "emoji" searches isn't as obvious - which ones are intended as a plural, and which as the singular term?

There are a few ways to sort it all out, and here's my best attempt at showing the changes in use of 'emoji' and 'emojis' as plurals: 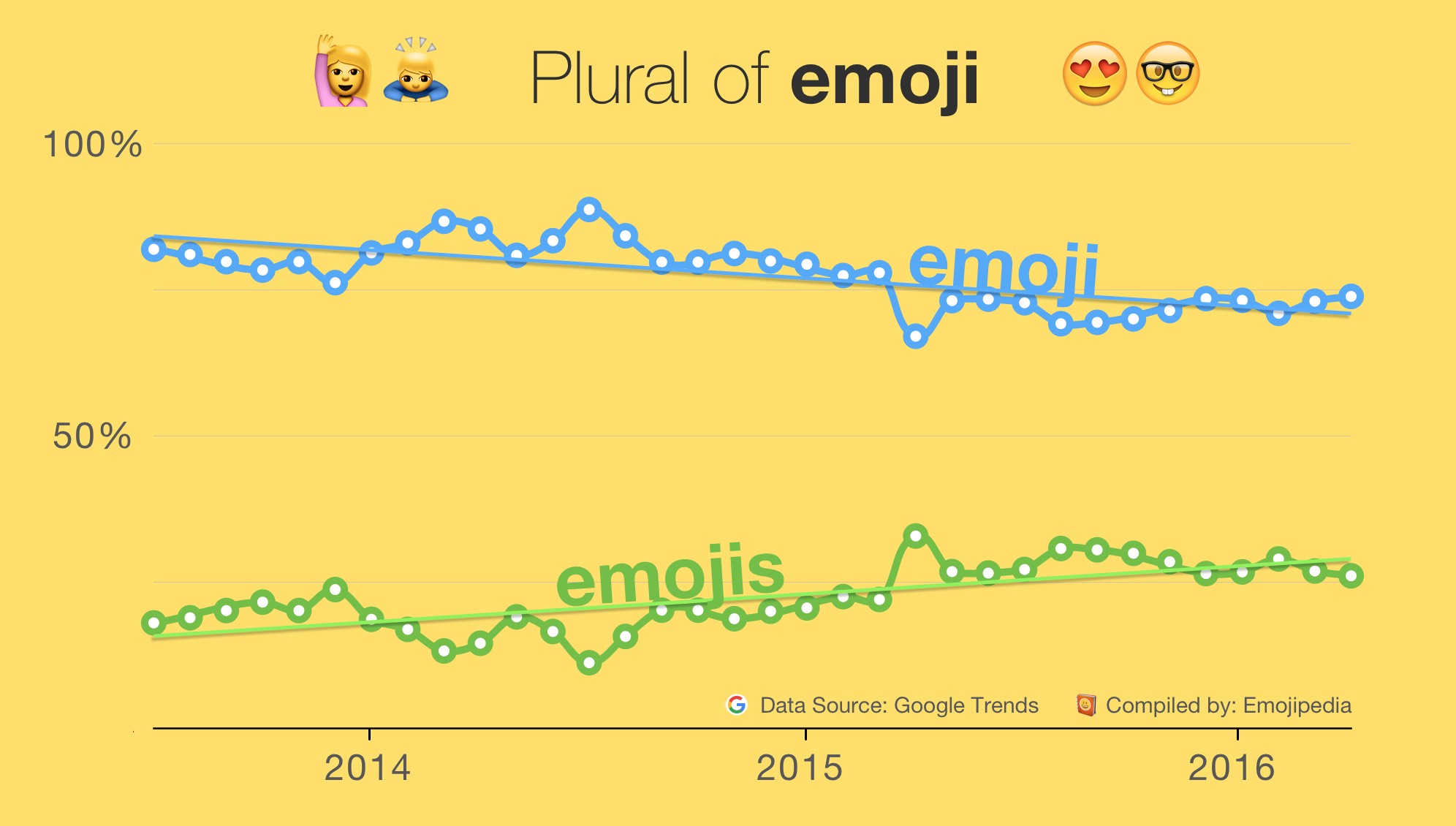 Above: "Emojis" is increasing as the preferred plural of "emoji".

This data uses Google Trends, but is not a comparison of all “emoji” v “emojis” searches. That would be too easy, and not an accurate way to show the use of plural "emoji".

Instead, the above chart assumes that the volume of searches for "emoticons" compared to "emoticon" is a reasonable[1] proxy for how many plural/non-plural searches are conducted each month for emoji.

When this is factored in, the results show a clear trendline:

In 2016, the percentage of emoticon/emoticons searches that were plural was 62%, with 38% being for the singular. Given this, the breakdown for emoji/emojis in 2016 looks like this: 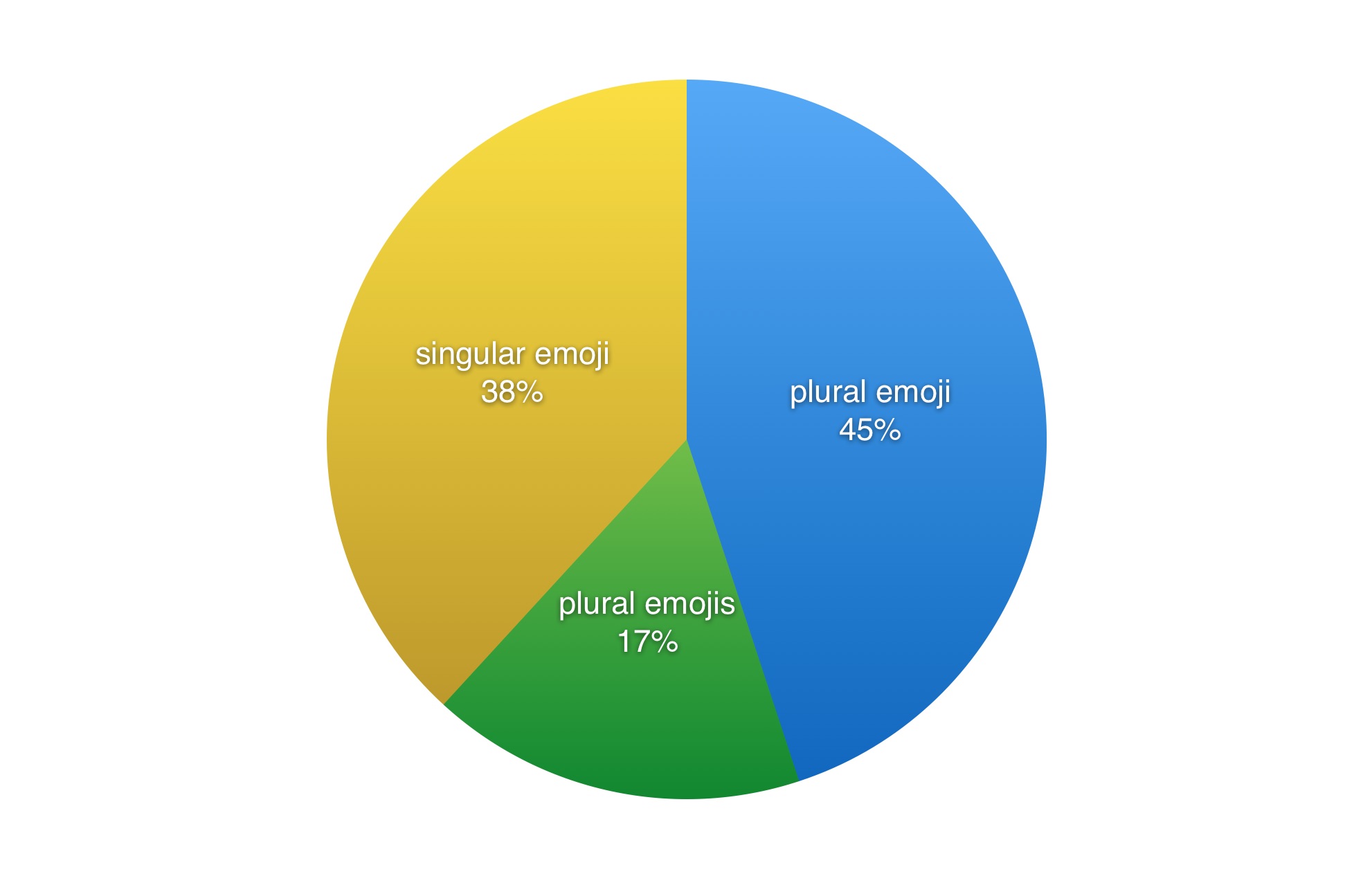 Another approach to determine the intent of people searching for "emoji" is to put it in a sentence which must by definition be plural.

The phrase "how many emoji" compared to "how many emojis" tracks a very similar trend to the above analysis. Emojis are up, but emoji still takes the 🍰 cake as the preferred plural.

Anecdotally, I find a higher percentage of people use "emojis" when speaking, and "emoji" when writing. This is harder to quantify, and ultimately not a very useful insight without any data to back it up.

We polled our Twitter followers last month and found that 64% of respondents say "emojis" as the plural of emoji.

What does this mean? Do we type "two emoji" but say "two emojis", or is it just that online polls are fickle and 400 Emojipedia users aren't a representative sample?

We're going to run two polls this time, to see if we can get to the bottom of this disparity:

The first asks what you write, and the second what you say.

These aren't polls of what you think is correct but instead are for what you actually do.

Emojis aren't only changing how we use language: the very use of the word "emoji" is changing right before us.

A few hours after posting this article, here's the early results of our poll:

Above: Early poll results showing a preference for "emojis"