Spelling out words with emojis is not the most typical use of these tiny images, but it is fascinating.

On September 24, 2019, Lizzo tweeted a peach emoji. This is an extremely common emoji for her to use. In fact, in 2017 the singer/rapper/songwriter/flautist, who often twerks while playing the flute, called the peach emoji her “favorite emoji.”

Lizzo unsurprisingly tends to evoke the peach emoji in its well-established sense of the butt. But this past September, she used it differently.

Lizzo used 🍑 Peach to spell out the word ‘impeachment’ on the day that Nancy Pelosi announced a formal impeachment inquiry of President Trump.

Writing out ‘impeachment’ as ‘im🍑ment’ is an example of what I like to call emoji spelling. So what exactly is emoji spelling? Is this a common use of emojis? Does it differ from classic rebus puzzles?

Lizzo is not the first person to use the peach emoji to spell out a form of the word ‘impeach.’ Cher had already done this in 2017—also notice how she uses 🐝 Honeybee to spell out both the words ‘because’ and ‘be.’

Cher, in turn, is not the first person to use the peach emoji in this way either. There’s evidence of people using the peach emoji to spell out variants of the word ‘impeach’ since as early as 2012 on Twitter. For reference, that’s the year that Apple first made the emoji keyboard accessible as a default setting with the release of iOS 6.0.

Cher has also used the peach emoji to spell out the concept of feeling peachy, so she, like Lizzo, bounces between meanings of this particular emoji with ease.

What is Emoji Spelling?

Emoji spelling is when you replace a letter or string of letters in a word with one or more emojis. Generally the emojis used to replace letters are selected phonetically based on what the emojis depict. Emojis of recognizable concrete nouns are more likely to be used in emoji spelling than more abstract emojis.

This is not how people generally use emojis.

Most of the time, people use emojis in a similar way to tone, gesture, or facial expressions. In written communication, this type of information can so easily be lost, but throw in a few faces or hearts, and suddenly a message has a lot more warmth or sarcasm or joy or whathaveyou.

You can see this play out in the emoji frequency data collected by the Unicode Consortium. The most frequently used emojis as of January 2020 are faces and hearts. According to this dataset, 😂 Face with Tears of Joy and ❤️ Red Heart are roughly twice as frequent as the two next common emojis, 😍 Smiling Face with Heart-Eyes and 🤣 Rolling on the Floor Laughing. While the red heart emoji depicts a concrete noun, heart emojis are often used to mark a loving tone rather than merely as literal hearts.

To contrast this, in emoji spelling, emojis are selected not chiefly for the their tone, but rather for the sound they make when you describe them aloud and how much that sound resembles an existing word or combination of letters. This is far more similar to the edge case of emoji in rebus-like puzzles than the use of emojis by the general population.

Some people might call ‘im🍑ment’ a rebus. Ben Zimmer, lexicographer and member of the National Puzzlers League, said this use of the term ‘rebus’ is totally fine by him:

“‘Rebus’ historically has been used to cover not just puzzles to decipher but other representations of syllables, words, or phrases by pictures or symbols.”

Zimmer explained that when rebuses first became popular in sixteenth-century France, they were used in all sorts of non-puzzle contexts, like on coats of arms and in other forms of heardlry. “Later, in the UK and the US, rebuses were deployed for a variety of playful purposes, and it's just that kind of playfulness that motivates rebus-style emoji usage as well,” Zimmer said.

Lewis Carroll wrote rebus letters to his friends, and Zimmer mused that if he were still alive today, Carroll would be “emojifying all over the place.”

I call ‘im🍑ment’ emoji spelling and not a rebus to differentiate between very specific contexts and purposes. For me, despite the term’s historical meaning, a rebus is a puzzle to be solved, while emoji spelling acts more like a spelling variant. Though perhaps it’s more that emoji spelling is a special type of rebus rather than another thing altogether.

One possible purpose of emoji spelling that past rebus use lacks is making something unsearchable by its conventional spelling online. This might be used to protect someone from trolls searching specific keywords as with Voldermorting. In Voldermorting, a term is playfully respelled (possibly with symbols or emojis) or replaced with another word entirely so that a post or message is readable by humans but not by machines.

It has long been a practice to swap out characters with symbols. Take, for example, the grawlix (also sometimes called the obscenicon). A grawlix is a symbol or string of symbols—often !, @, #, $, %, &, and *—used to visibly bleep out swear words. This self-regulated form of censorship has been a common trope in comics since the turn of the twentieth century, but over the years this practice has been used far beyond its original context.

Emojis can be used in a similar way. Any round emoji might be used as the letter ‘O,’ and ❌ could be used to represent the letter ‘X.’ Getemoji.com has gone as far as to recommend an entire emoji alphabet (or 'emojibet'). One of their recommendations is ⛽ Fuel Pump. I wrote about this exact example of emoji spelling in 2017 on my blog Lexical Items:

“[A]n earlier design of the fuel pump on some platforms included a giant ‘G’ on the front of the pump to stand for the word ‘gas,’ (a very US-centric design as this is not called ‘gas’ globally). This prominent letter placement inspired some people to start using this emoji to spell out words. Well, at least it inspired people to spell out one word: ‘gang.’ Even though the ‘G’ has been removed from most of the fuel pump emoji designs, this use is still alive and well. Just do a search for ‘⛽🅰️🆖’ or ‘⛽ang’ to see some examples.”

On a public social media account, a person might want to obscure their conversations about gangs to keep them from being easily searchable by law enforcement.

Emoji spelling might also be used to get around censorship, like 🍚 Rice and 🐰 Bunny as used to talk about #MeToo in China. In a 2018 article on The Conversation, Meg Jing Zeng explained that “‘Rice bunny’ (米兔), pronounced as ‘mi tu,’ is a nickname given to the #MeToo campaign by Chinese social media users” to circumvent government censorship.

In all these cases, emoji users create a sort of spelling variant to be used again and again rather than a puzzle to be solved once and then forgotten. However, as an emoji spelling becomes increasingly well known, it becomes more and more easily searchable by trolls, law enforcement, or censors.

These machine unreadable examples of emoji spelling feel distinct from the various historical purposes of rebuses. Whether you call them emoji spelling or rebuses, these use cases are significant to digital culture and worth discussing.

Why Is This Use of The Peach Emoji Gaining Traction?

Any time you have trendsetters with the fanbases of Lizzo or Cher use a newer word or expression—or emoji spelling in this case—their fans take note and will often start adopting this use themselves. This is a very real way language evolves.

I also think butts are somewhat responsible here. The non-literal canonical meaning of 🍑 Peach is, of course, ‘butt.’ Many of the people using the emoji spelling 'im🍑ment' revel in the fact that they're evoking a butt. It adds snarky levels to the word.

Two days after Lizzo’s ‘im🍑ment,’ tweet, Heather Schwedel, writing for Slate, worried that we’re now in a state of “linguistic confusion” because of the multiple meanings of 🍑 Peach: “If someone texts you a peach emoji, what are you supposed to think?” Is it a sext or wry political commentary?

As with any communication, context is vital to correctly interpreting the meaning of emojis. Lizzo doesn’t have a problem seamlessly switching between different meanings of the peach emoji, or even combining them. If her fans are confused, she doesn't mind spelling it out for them.

Of the 117 new emojis approved last month, Pinched Fingers, Transgender Flag, and Smiling Face With Tear were the most popular on social media. Least popular? Bucket, Placard, and Elevator. Above: Engagement on 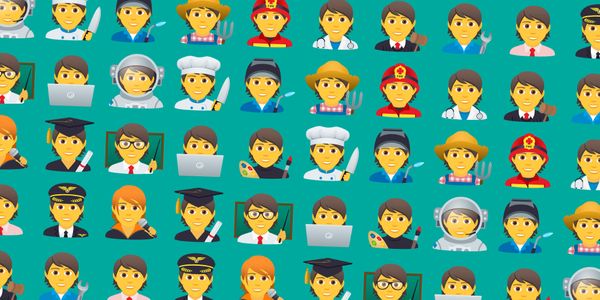